Accessibility links
McConnell Repeats Pledge To Vote On Trump's Supreme Court Pick This Year : Death Of Ruth Bader Ginsburg Senate Majority Leader Mitch McConnell said that voters elected a GOP Senate in 2016 and strengthened it in 2018 because they wanted action on the president's federal judicial nominations. 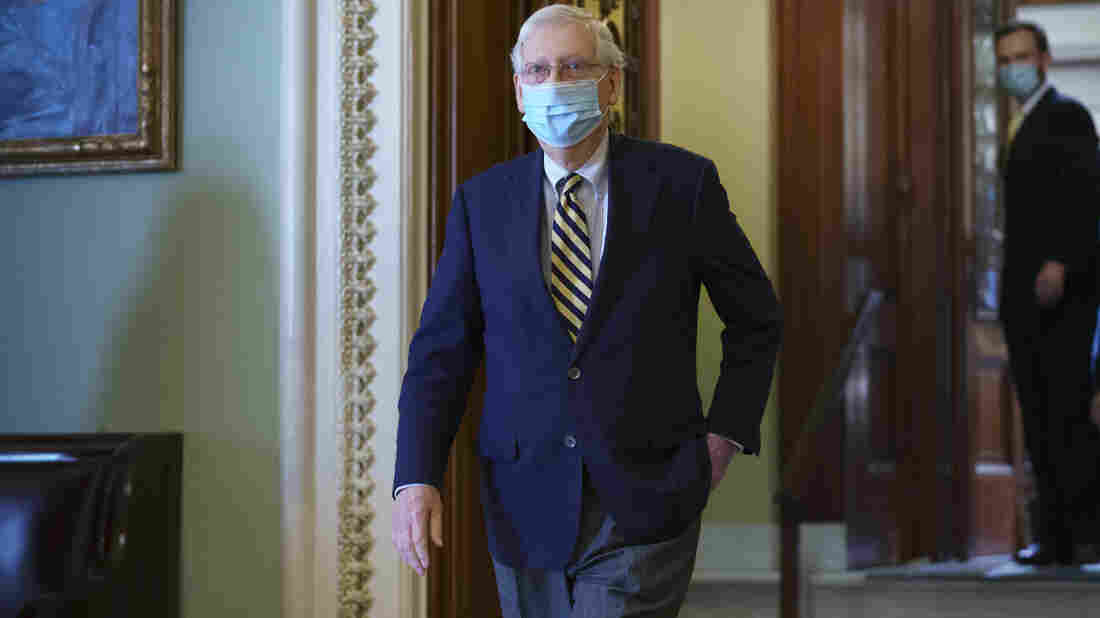 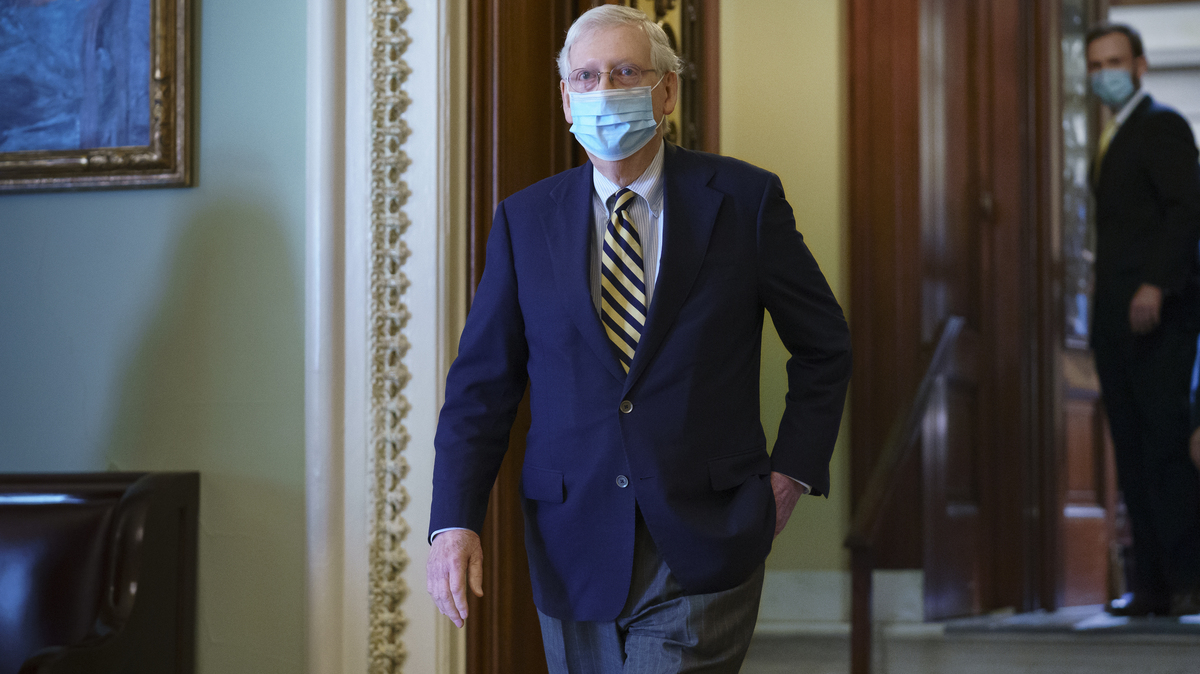 Senate Majority Leader Mitch McConnell, R-Ky., leaves the chamber Monday after speaking about the death of Justice Ruth Bader Ginsburg. McConnell made the case on the Senate floor that voters elected a GOP majority to confirm judicial nominees.

Senate Majority Leader Mitch McConnell reiterated his plans to move forward on President Trump's nominee to fill the vacancy on the U.S. Supreme Court left by the death of Justice Ruth Bader Ginsburg.

"The Senate will vote on this nomination this year," McConnell, R-Ky., said Monday on the Senate floor. He didn't say whether the vote would come before the election, or in a lame duck-session of Congress that occurs after the November election and before the start of a new session in 2021.

Trump told reporters he would probably announce his pick on Saturday. He is considering a group of five female candidates. Trump repeated his preference that the Senate vote on the nominee before the Nov. 3 election.

McConnell pushed back at those who argued that with just weeks left before the election the Senate can't complete the confirmation process, saying there are 43 days until the election and 104 until the end of this session of Congress.

"The Senate has more than sufficient time to process the nomination. History and precedent make that perfectly clear." He cited several Supreme Court confirmation votes — including Ginsburg's — that took place within a similar or shorter period of time.

Senate Minority Leader Chuck Schumer, D-N.Y., slammed Republicans for acting on the vacancy this close to the election, saying they've "made a mockery of their previous positions" in 2016 when McConnell blocked action on President Barack Obama's nominee, Merrick Garland, to fill a vacancy due to the death of Justice Antonin Scalia.

But McConnell maintains that the situation this year is not analogous to the 2016 instance because there was divided government then. He said voters elected a GOP majority in the Senate in 2016 and expanded it in 2018 because Republicans touted their plan to work with the president on his nominations to the federal judiciary.

"Perhaps more than any other single issue, the American people strengthened this Senate majority to keep confirming this president's impressive judicial nominees who respect our Constitution and understand the proper role of a judge," McConnell said.

So far two Senate Republicans — Susan Collins of Maine and Lisa Murkowski of Alaska — have said they do not believe the Senate should take up the president's nomination before the election. If another two GOP senators joined them and opposed the vote, McConnell would be unable to proceed — or he could be forced to postpone action until after the election when they might be open to backing the president's nominee.

The chances of that continued to dim Monday night, though, when another moderate Republican came out in favor of a vote. Sen. Cory Gardner of Colorado said in a statement, "Should a qualified nominee who meets this criteria be put forward, I will vote to confirm."

Retiring Republican Sen. Lamar Alexander of Tennessee said over the weekend he too would support his party in voting on a nominee in an election year.

Schumer said the vacancy on the high court puts "everything on the line" — listing health care, same-sex marriage, reproductive rights, workers' rights and voting rights. "If you care about these things and the kind of country we live in — this election, and this vacancy, mean everything."