Accessibility links
James Levine Leaves The Boston Symphony Orchestra : Deceptive Cadence Beleaguered by health problems, James Levine steps down from his post at the venerable orchestra. BSO managing director Mark Volpe explains why, and talks about Levine's high and low points with the BSO, his legacy and the orchestra's future. 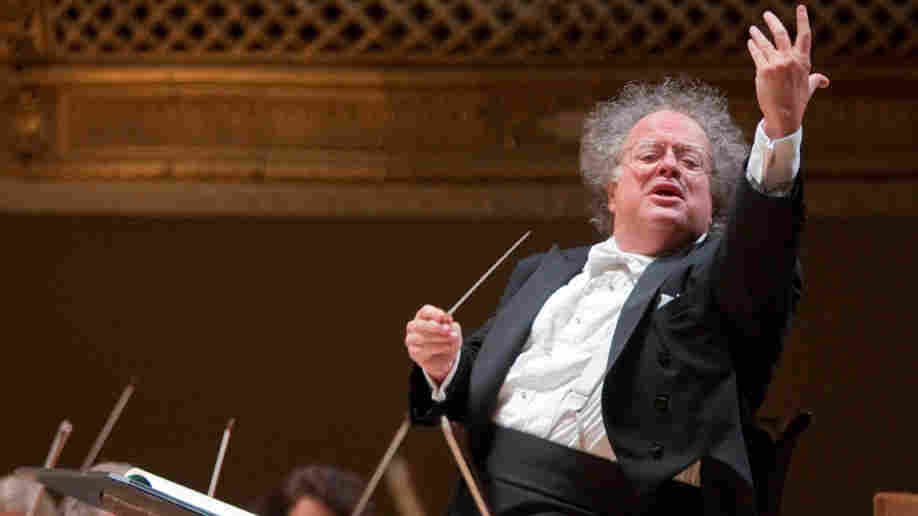 After seven seasons as music director of the Boston Symphony Orchestra, James Levine is resigning from the post effective Sept. 1, 2011. Beleaguered by health issues through most of his tenure in Boston, Levine — who also serves as music director of the Metropolitan Opera in New York — canceled all of his remaining concerts with the BSO Wednesday. Shortly afterward, BSO Managing Director Mark Volpe announced that Levine was stepping down completely.

Levine is one of the world's most respected and versatile conductors. In 2001, when he was named music director designate of the BSO, it was considered a coup for Boston. But even then, observers questioned how the maestro would balance the new job with his ongoing responsibilities at the Met. Peter Gelb, the opera company's general manager, released a statement yesterday that said Levine intends to fulfill his Met engagements.

Levine's first two seasons with the BSO were acclaimed for their vivid performances and his rigorous programming, which juxtaposed serious modern works with the classics. In 2006, an onstage fall severely injured his shoulder. He also had a kidney removed due to a malignant growth, and he continues to endure a string of debilitating back problems.

Below is an edited version of the telephone conversation I had with Volpe this morning about Levine's high and low points with the BSO, his legacy and the orchestra's future.

Tom Huizenga: It's been a rough few years for you with regard to James Levine's health issues, and I know it must be sad to make an announcement like this, but one side of you must be relieved.

Mark Volpe: Well, it's mixed emotions. The reality is it's a sadness because he certainly is one of the great conductors. But the continuing health issues have precipitated significant challenges, and I think Jim understood this. And more than anything else, it's sad because it will preclude him from all he wanted to do artistically with the BSO. That being said, there is an element of relief because it's been 2 or 3 years of uncertainty. It's never ideal when I'm on stage before a concert making an announcement [of a cancellation]. So the relief comes from that now we can move forward, hopefully continue a relationship with Jim once it's clear what his health will permit.

TH: Did you ask him to step down?

MV: We began discussing a different role for him last fall, a different role other than music director, and of course the most recent health issue interrupted that process. So now we're going to continue talking, but smoke has to clear. This is not the way we wanted it to happen, but we both understood that one more big block of time missed because of a health issue, and at a certain point our credibility comes into play in terms of our relationships with our audience and our players. It was clear we needed to move, and the timing of this announcement was a little more abrupt than we had hoped. It was more a joint conversation. But frankly he hit the wall again. We had a rehearsal here Wednesday night for the Mahler 9th that he tried to get through, but he was experiencing enormous pain from a procedure he had. And he acknowledged it in the Globe — so I'm not divulging anything inappropriate — that he tried to self-medicate and it was clear he was in distress. I got to the last part of the rehearsal and talked to him for a good 40 minutes afterward with the artistic administrator, and one of the things we basically told him was "Jim, you got to focus on getting better."

TH: Do you think Levine took on too much when he accepted the Boston job? Given his work ethic, we know he could have handled it intellectually, but was it just too much physically, taking on both the Met and the BSO?

MV: It was always a concern and the scheduling dimension was not without challenge. That being said, the first two to three years were glorious. You can read the press accounts and external validation and all that. As long as his health held together — because the guy's appetite for work is probably without equal — but when his health issues [began], the rotator cuff, the kidney and the whole series of back issues, it became clearer and clearer as time progressed that it was not tenable. But the reality is we wouldn't have made that initial decision if we thought it was going to be too much.

TH: Do you recall some highpoints in the Levine years?

TH: Although he didn't show up for any of those concerts unfortunately.

MV: No he didn't. He missed all twelve Carter concerts at Tanglewood, but they happened because of him. And there are highlights even as recently as last September. Opening night we did a Wagner program with baritone Bryn Terfel that blew everyone away. It was Jim's first time back on the podium and rested after a big break over the summer — enormous energy.

TH: Has Levine left his mark on the BSO sound at this point?

MV: Yes, I think he has. He wasn't that involved in personnel issues, but just his great ear, you know, I think he rebalanced the orchestra a little bit. I'm biased but I think the orchestra, artistically speaking, is in great shape. And what you have here in Boston is a great audience and a great hall, and financially speaking — relative to other orchestras — a stable environment with an endowment. And Jimmy, certainly in terms of artistic standing, conducted many great concerts and he's a great orchestra builder. He did it at the Met over a 40-year horizon, and he did it here over a 7-year horizon.

TH: You probably can't deny, though, that all the frustration with the cancellations, and the players having to perform under replacement conductors that they've never met and changing repertoire at the last minute, the orchestra's sound has probably suffered a little bit, don't you think?

MV: Actually, when you talk to conductors like Lorin Maazel and Christoph Von Dohnanyi and others who have been here, I don't think it has suffered. I think it's put us on edge, and as I said, it's not tenable any more, but there's a great pride on stage. I understand the question. Has it been unsettling and disruptive? Absolutely. Has it impacted the sound? I think if it had kept on going on and on, yes it would, but I think we're in a pretty good place right now. We're going to miss Jimmy, I don't want to suggest otherwise, but life is going to go on. And as we search for our next music director, the reality is — and I don't want to tempt fate — but the orchestra's in pretty good shape right now.

TH: I take it the search is on right now?

MV: The search is on, but we haven't even appointed a search committee. There will be an equal compliment of board members and musicians, and it'll be staffed by our artistic administrator Tony Fogg and me. I'm going to talk to the players in the next few days, and I'm talking to the board leadership early next week, and then we'll put together that committee and convene in a few weeks and get at it. First we'll define what we're looking for before we even start talking to anybody.

TH: And what are you going to look for?

MV: We'll look for a great conductor who can inspire the orchestra to the highest level of music making, but can also connect externally with all the other constituencies that are integral to our ongoing viability — first and foremost our audience — but also someone who at some level is media savvy, and I'm talking about the new media, the new world we're living in. Obviously you start with the fact that the person has to be a great conductor.

TH: Do you think conductors like David Robertson and Robert Spano are ready to step up?

MV: I'm not speculating about any names. But good try!

Have any great James Levine or Boston Symphony stories to tell? Please tell us all about them in the comments section.