Accessibility links
My Weekend With Jascha Heifetz : Deceptive Cadence The new 103-CD Jascha Heifetz box set presents a vast trove of fantastic fiddling over a seven-decade career, from his first recording session as a teenager to his final recital in 1972. 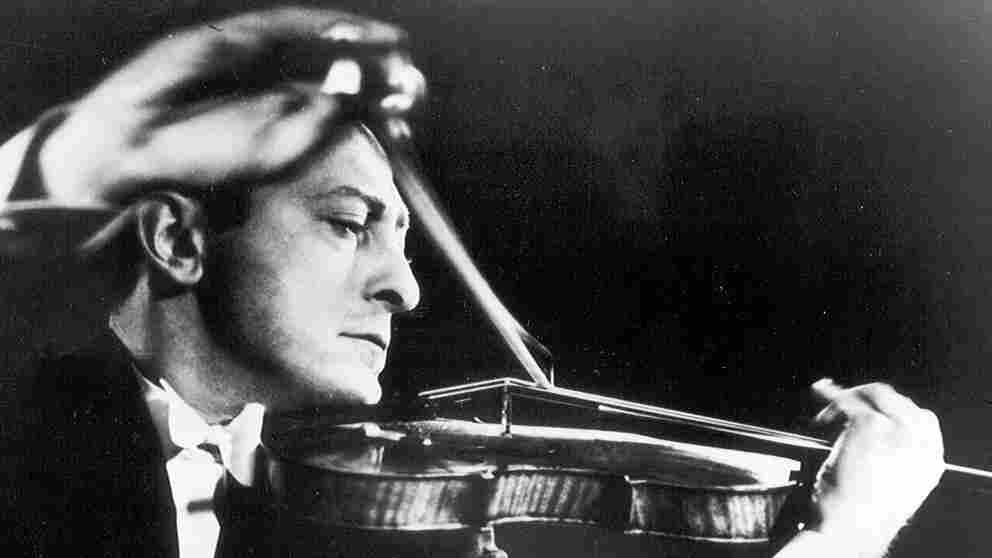 It's hard not to talk numbers when it comes to the new Jascha Heifetz collection. Last week Sony Classical released a 10-pound box of the famed violinist's recordings — 103 CDs in all, which the Guinness World Records people have declared the largest set of audio discs devoted to a single classical instrumentalist. If you include the hour-long DVD, that adds up to more than 75 hours of listening. Guess what I did this weekend?

I admit I didn't hear every note of the set. That would have taken more than three sleepless days and nights of listening. Still, I did sample judiciously.

Amid the dozens of famed Heifetz recordings (housed in their original album cover art) are a few rarities. There's an imposing 1937 Brahms Concerto with the Boston Symphony and conductor Serge Koussevitzky that predates the standard release with the same personnel. Plus, there's a trove of long forgotten but appealing music such as the concerto written for Heifetz by Louis Gruenberg, Arthur Benjamin's Romantic Fantasy and Ernst Toch's Vivace Molto, recorded with violist William Primrose in 1941. You can hear a few highlights from the box below. But first, a few more numbers.

Heifetz had his first lessons at age 3, gave his first public performance at 5, made his Berlin Philharmonic debut at 11, played Carnegie Hall at 16. A series of seemingly endless concert tours followed. The golden-toned announcer on the DVD states that the total mileage of Heifetz's globetrotting equaled five round trips to the moon.

My stint years ago as a drive-time classical DJ gave me a decent grounding in Heifetz's art, but honestly I had forgotten just what a miraculous violinist he was. I dipped into many points in his career in this set and was amazed to find that the masterful technique sounded virtually the same, whether in his first recording session as a 16-year-old in 1917 or in his final concert in 1972.

Yet Heifetz was not above criticism. His interpretations were sometimes thought of as mechanical and aloof. And you can often hear what his detractors are talking about when you listen to him play Bach.

His phrasing is aristocratic yet so austere in the 1952 recording of the massive chaconne from the Partita No. 2 that, in the end, it feels rather cold-hearted. It is, no doubt, an awesome 13 minutes of playing, but in great performances of this music you should feel like you've been on a journey and emerged a changed person. With Heifetz the only thing you're sure of is that all the notes were perfectly placed.

Heifetz supporters say he acquired his reputation for aloofness because of his stiff concert demeanor, and if you simply avert your eyes the playing is far from cold. Watch the accompanying DVD and judge for yourself. Giving a recital in Paris, a stone-faced Heifetz peels off one incredible encore after another, calling out the titles with tedious comportment of a bingo announcer.

And yet if you pop in vol. 87, which contains the Mozart Concerto No. 5 with John Barbirolli leading the London Philharmonic in 1934, you'll hear plenty of warmth and tenderness.

No matter which camp you fall into, it is undeniable that Jascha Heifetz was one of the most virtuosic musicians of any stripe. The proof is in this vast vault of recordings. 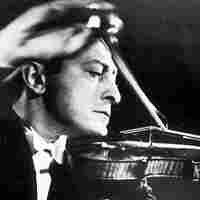 Heifetz was just 16 when he made this recording, just days after his 1917 Carnegie Hall debut. The luminous tone, exquisite bowing and phrasing are hallmarks he would carry on for more than 50 years.

This 1935 recording with John Barbirolli leading the London Philharmonic was the first of two Heifetz would make of the Sibelius Violin Concerto. This is the very first complete recording of the piece, and many still think it's the standard to which all others must measure up. Heifetz seems totally synched with the music in both heart and bow.

Heifetz was justly famous for his showpieces, especially music written by composer-violinist masters like Henryk Wieniawski, Fritz Kreisler and Pablo de Sarasate. Here Heifetz is at the height of his virtuosic powers in the final section of Sarasate's "Gypsy Airs," recorded in 1951 with William Steinberg leading the RCA Victor Symphony.

Heifetz came from a generation of musicians who were generalists. They played everything from Bach to contemporary compositions. Although you'll find no atonal works by the likes of Schoenberg or Berg in the set, Heifetz did play music of the day — pieces by Ernesto Halfter, Howard Ferguson and Karen Khachaturian. And of the concertos written expressly for him, one by William Walton is the best. Heifetz made two recordings, this first one, with Eugene Goosens leading the Cincinnati Symphony, dates from 1941.

It's not surprising that Heifetz excelled at playing short pieces as his career blossomed with the rise of the 78 rpm disc. He played these as encores right up until the end of his career. This recording, from Oct. 23, 1972, documents Heifetz's last public concert. His impeccable tone — just like in the "Ave Maria" recording above — remains a thing of great beauty.