Accessibility links
Remembering Critic And Opera Hero John Steane : Deceptive Cadence The British writer's breathtaking knowledge and affable prose set him apart from all others, fueling the passions of opera fans everywhere. Read reminiscences from Steane's fans and friends and hear some of his favorite singers. 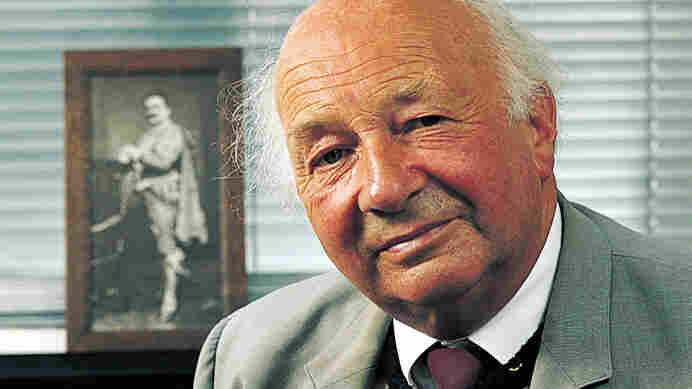 One of the opera world's greatest voices has gone silent. John Steane never sang a note on stage, but as a writer of books and articles about opera and vocal technique, his voice rang true as one of the finest critics the art form has seen in the last 50 years. He was 82 years old.

Steane, who lived in Coventry, England, was a hero of mine, and I've often thought that if I could write about opera one quarter as well as he could, I'd die a happy man. Steane's seminal 1972 tome The Grand Tradition: Seventy Years of Singing On Record, 1900 to 1970 has been a bible to opera geeks everywhere. For a long stretch some 20 years ago, the book was out of print in this country. To compensate, I renewed it nonstop for five years from a university library until a book seller in Santa Fe finally hunted down a copy for me. I still refer to it frequently and with pleasure.

Reading Steane's unstuffy yet insightful evaluations of hundreds of singers, you realize that he simply had an incredible ear, impeccable taste and an immense talent to translate into words what he heard. Below, he talks about the famous Italian baritone Titta Ruffo, whose heyday paralleled tenor Enrico Caruso's in the first two decades of the 20th century.

Five years younger than Caruso, Ruffo was very much his counterpoint among baritones. He too suited the trend of operatic development, with a darkly dramatic voice and a magnificence of sound that could produce a thrill matching the broad emotional appeal of the new verismo operas. His singing has still less repose about it than Caruso's, and he sometimes 'pressurized' the tone in a way that Caruso never did, so that its vibrancy would become an emotional quiver of sound around a tonal center. I personally find that three or four records are enough at one stretch, though at the same time the voice is one of those that creates an appetite for more. One returns to him as to some favorite food for a full-bodied satisfaction that nothing else can quite offer.

Although Steane died March 17th, I just found out from an obituary published Monday in The Guardian. I feel like it's somehow the end of an era, now that Steane's distinguished colleague Alan Blyth has also passed on, along with other greats like Michael Steinberg, Stanley Sadie and HC Robbins Landon.

I was privileged to have interviewed Steane twice. Talking with him about Elizabeth Schwarzkopf, Maria Callas and Enrico Caruso, I felt like an adoring and jittery 12-year-old discussing the Detroit Tigers with Ernie Harwell. Steane was, like his writing, always gracious. The last time we spoke, we had our own little Caruso listening party, some of which made it into a radio story I did for All Things Considered. It turned out to be as much a love letter to Steane as it was a news report about the famous Italian tenor.

Former music critic Tim Page, now a professor of journalism and music at the University of Southern California, was also smitten with Steane's writing. Emailing back and forth about his passing, Page said he was astonished by how well Steane could describe the difference between one soprano and another, and how he made you hear that difference in his prose.

"There is an extraordinary authority to Steane's writing — but an authority that invites you in, rather than attempts to dazzle from afar," Page writes. "His writing is very musical in itself. I wasn't surprised that he wrote a biography of Tennyson, who had the same kind of ear: The words themselves become music."

One of the great joys of reading Steane is the sense of discovery. He continually turns you on to great records by great singers, many you've never heard of. Page credits Steane for reintroducing him to the vocal wonders of Spanish soprano Montserrat Caballe.

"It was Steane who was responsible for pointing out the sheer lustrous sound of Caballe's voice to me," Page says. "He examined her art, took it apart and then put it together again, as he so often did. I had heard her once and been very impressed. Coming back to her after Steane, though, I listened for what he heard and found my initial impressions strengthened and magnified."

Louise Barder was also saddened to hear the news about Steane after I sent her the link to the Guardian obituary. Barder, an editorial director at the classical music public relations firm 21C Media Group, was once the founder and owner of Romophone, a short-lived but terrific record label devoted to opera singers from ages past. She said she was hoping to spend time with Steane in England over the summer.

"He was a man of such knowledge, eloquence and exquisite taste that anyone working in the field of opera couldn't fail to be inspired by his words about and passion for the art form," Barder wrote in an email. "Whatever he lent to Romophone — whether it was a beautifully researched and scripted liner note, words of advice or encouragement, a thoughtful and honest review of a new title, or just sharing his opinions and stories with me about some of the greatest opera singers of the early 20th century — was at the heart of the label's success and popularity. His love of opera was infectious, and I caught it from him!"

With its elitist, old-world trappings, opera can seem like a world whose doors are closed to many people. John Steane, with a unique combination of erudition, enthusiasm and approachable prose, opened that door quite a bit wider.

Perhaps the best thing we can do now to remember Steane is to listen to a few of his favorite recordings and read some of the annotations he wrote for the Romophone label. 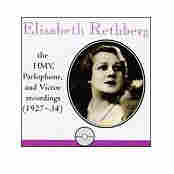 Her "Morro, ma prima di grazia" from Ballo en Maschera is among the classics of the gramophone's vocal literature, touching in its genuine but restrained emotion.

Martinelli's voice, in itself, has such a strong individuality of timbre that it imprints and impresses as any strong human individuality will do; but he was also able to develop a style which, uniquely among comparable artists in the field, at once preserved the long, singing-line of Italian melody and infused it with a musical-dramatic sensibility animated by a feeling for the implications of harmony and the energy of language. 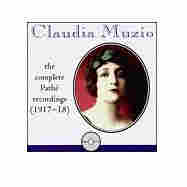 The recording of the Mefistofele aria is an example of singing which already comes from an artist who shades with feeling and skill beyond her years. The balance of pure legato and detailed expressiveness in these early recordings is finely maintained. These Pathe recordings — with their surface noise — bring her before us with an almost startling vividness: the 27-year-old newly introduced to the Metropolitan Opera, and, already burning within her, the art which was to become as tragically expressive of the human lot as that of any singer in her century.

Her voice was a delicate instrument, no doubt, and her voice-character was well adapted to express the most tenderly feminine of emotions and the most vulnerably innocent of human natures. Ye the more we hear it, the stronger its individuality becomes. For a slender voice there is a surprisingly ready supply of firm and telling chest notes. The low-lying phrase "e poi la nave appare" in "Un bel di" is effective and even colorful where with many light voices it practically sinks out of hearing.