Accessibility links
Connecting Kids With Classical Music: Here's What You Told Us : Deceptive Cadence How do we introduce kids to classical music? As it turns out, there are a broad variety of answers. Read a selection of the suggestions you sent us.

Connecting Kids With Classical Music: Here's What You Told Us

Connecting Kids With Classical Music: Here's What You Told Us 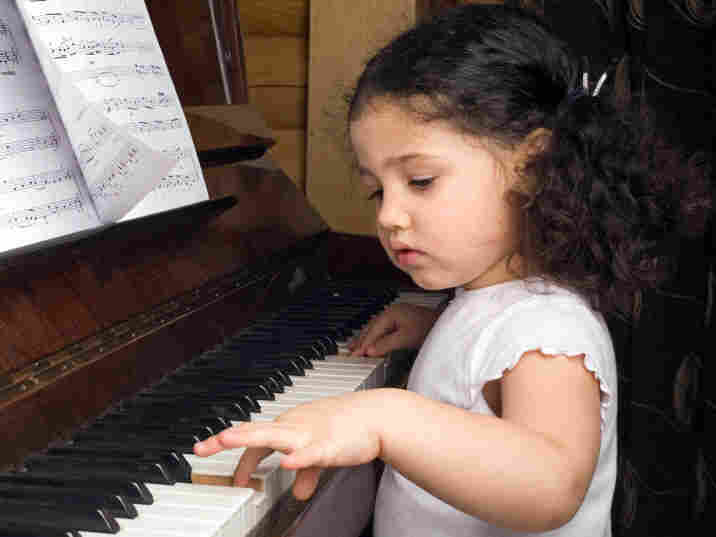 All last week on this blog we asked the question: How do we best hook kids up with classical music? We asked you, along with a few prominent musicians, and we got a broad variety of responses — from "give the kid a trumpet," to "let them watch Leonard Bernstein's Young People's Concerts."

Still, a few recurring themes emerged, and I've gathered them in groups of responses.

And there's no need to let the discussion die here. Please leave your thoughts (once more), in the comments section.

Let there be fun! Whether they are dancing, swaying, marching, pretending to be the wind, animals or dinosaurs, young children learn better when moving their bodies. Passive learning such as watching DVDs just doesn't work.

Participation. For me, half the experience of classical music is lost if you're not actually part of the performance. I grew up in London, UK, and they used to run a concert series for families at the Barbican Center where everyone came with an instrument (recorders, triangles, hands to clap, anything) and there were play-alongs. They were a huge amount of fun and an excellent gateway.

For me it was simple, I was introduced to almost all the classical music that I adore today from doing ballet as a kid. I'm sure many young people who grew up studying dance found their way to adoring Chopin, Schubert, Vivaldi, and of course, Tchaikovsky, the same way.

I teach a Suzuki Baby music class and Suzuki violin to young children and get the privilege of experiencing children enjoying classical music everyday! For children who play an instrument they enjoy the intellectual challenge of learning something new. As far as listening, often moving to music can be a great way to connect to classical music. Get out some scarves and dance or try conducting together. Even at a tiny age (less than a year) babies are excited by being around musical instruments and singing. Music can be such a great way to enjoy time together.

jnl supbaru wrote: I base this on nothing but my own experience, but I'd be surprised if you'd be successful foisting any of your tastes onto your kids, especially to the exclusion of other styles. If they hear it, they may like it. As for whether a 1950's cartoon is any less "relevant" than a 150-year-old opera, I can't imagine where that argument would even begin, but I can tell that I saw it in the 1970's, and if I break out "Spear and magic helmet," every one of my contemporaries knows it, and has at least sampled some Wagner. Which brings me to my conclusion that your kids will hear it because some current or future artist will sample it into a pop tune.

Children love what they come to know personally and what is important to their parents. Families most successful with music education include music as part of the daily family life AND have a parent identify certain composers, styles or pieces of music as favorite, or important (Examples: "This was played at my wedding" or "This was played at my sister's funeral" or "This was so beautiful I cried at the concert"). Oft-repeated wisdom is that children like a clear musical form, so classical and 20th century choices provide that. Dr. Suzuki felt that music with both regular forms and strong beats were good for kids, hence a dominance of dance music in his teaching repertoire. Ways to show your children how much you value music? Concert attendance, music lessons plus daily listening and practice, YouTube, music CDs and videos. Personal favorites in my family?
Videos: Fantasia, Amadeus, The Sound of Music, The Music Man, The Young Person's Guide to the Orchestra and Beethoven Lives Upstairs.
Story CDs: Vivaldi's Ring of Mystery, Tubby the Tuba and Peter and the Wolf.

My mom tried to make us classical music fans by having it on all of the time.
The result is that I can badly whistle a fair number of classical melodies. But, about the time I would have become interested in it on my own, I found the subject too familiar to be interesting. I found that the familiarity of the music made it hard to delve much deeper.

My recommendation: Don't hide it from kids, but don't try to force them to like it, either. My mom tried to make me like all kinds of art, but I just wasn't interested — to the point where this is one of the biggest battles I remember from my childhood. She'd throw me in with a bunch of artsy kids and hope I picked up something, but I'd quickly decide they were clueless and I'd go build a rocket or write a computer program. I found engineering to be much more interesting, relevant, and beautiful. I'm starting to figure out what art has to do with anything now that that I'm in my 30s and getting involved with makerspaces and fab labs.

Instead of trying to make kids like something, just make it accessible. Make sure going to a classical concert is something that normal people do, but don't force it.

This is a very fine article with enthusiastic comments. However it is overwhelmed with the premise of music as a commodity, rather than a participatory activity. Many years ago music as a participatory activity was available in many public school systems in the United States. In my lower middle class town elementary school, we sang in school choruses, were taught solfege and learned music notation by the 2nd grade.

The "music appreciation" courses were icing on the cake, to expand our understanding of the breadth of musical and theater arts beyond what we could perform in K-12 grade schools.

Such participation was and is a great fertilizer for creative minds. Now it is gone (removed) from the educational gardens of our cultures, thus preparing the population for further commodity exploitation.

Classical music — unlike other kid's music and rock 'n' roll, etc. — rarely offers that immediate morsel for gut reaction that engages kids and teens without prompting. I teach elementary music and struggle with this topic regularly — how do I expose kids to the music so that they are engaged and enjoying the experience? I've found several ways to trick them into listening peacefully without dictatorship: I make a list before we listen: Season, Weather, Time of Day, Animals, Body of Water, Feelings and Place. Then we listen to a small excerpt and I pause and have the kids describe the music according to those criteria. We listen to a contrasting selection and do the same. Kids latch on immediately. Then they get a sheet of paper to draw to the music using those ideas. They kids can listen for thirty minutes and more using this "gimmick." It works well for many of the classical warhorses from the Baroque through early 20th century era composers.

I teach music to 300 kindergarten students in a lower-income school district in Kansas. I serve a large English Language Learners population and many kids whose parents don't listen to anything but hip-hop. We've been talking about poetry and the rhythm of words this last week (including Spanish poetry) using the Classical Baby Poetry collection. I believe in subconscious immersion. I have classical music playing when they walk in. We keep the steady beat, make up actions and dance, dance, dance. There have been so many studies done on pre-school music preferences and I find it amusing that every study comes up with the same conclusion. They don't have preferences. They are open to everything.

Without doubt, it was subversive Warner Brothers Looney Tunes that began a lifelong love of classical music for me and millions of people my age. Thanks, Bugs Bunny & Elmer Fudd!

I vote for Bugs Bunny. Not only for tasteful adaptation but for deflating the ego of the narrow-minded and difficult at every turn. Session players often comment that cartoon sessions are hard, as there are hits that have to be clean all over the place. It's good for basic development. Not subtle, but after all, it's for kids.

The great thing about kids and music is that they don't "categorize" music the way we do — they actually hear it and feel it; if it's good, and moves them, they like it! Whether it be classical, jazz, blues, pop or bluegrass! If they like it, you'll know it, and if you are smart, you'll expose them to all kinds of great music, and hope that from this, at least some of it will stick to them, and that they too will grow up to love and appreciate good music, from many genres — not just classical. Now that would be my true "dream come true" as a parent.

I think the bigger question is "why do we treat classical music so differently?" After all, we are not asking how to introduce children to pop, country, hip-hop, folk, etc. Our children will pick up on our perceptions — our prejudices as well as our endorsements.

Children learn what they live. Play music of all kinds. Learn to play an instrument. Take your kids to concerts. Go to their concerts. Make music a part of the family life.

I remember as a child my parents, who were more eclectic in their musical tastes and still are to this day, playing various types of music for us as children. We were never subject to just one type of music when we were growing up. My love for classical music began with an introduction to the classic musicals of the 1950s. I remember singing along to "Do Re Mi" on long car rides and listening to country music and NPR one after the other. I grew up without a stigma to any type of music — music was music to me. It wasn't until high school that I really got interested in classical music. This fall I will be entering a high-caliber masters program to study opera and I am convinced that my eclectic music background served me well as a young child. It didn't necessarily make me a more intelligent person, but it gave me a much more sophisticated music palate and a much greater love for all kinds of music, whether it be rudimentary or advanced.