Accessibility links
James Carter and Roberto Sierra: At the Junction of Jazz and Classical : Deceptive Cadence Jazz and classical music have merged many times in the past and not always with pleasing results. But on the new album Caribbean Rhapsody, James Carter's saxophones combined with Roberto Sierra's compositions may set a new standard for collaborating.

7:35
James Carter and Roberto Sierra: At the Junction of Jazz and Classical 7:35

James Carter and Roberto Sierra: At the Junction of Jazz and Classical 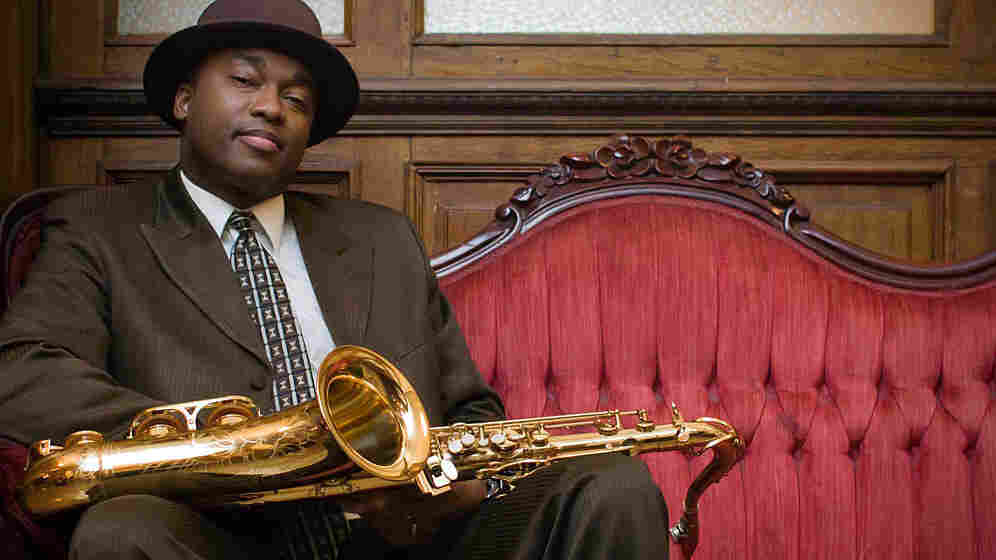 Roberto Sierra is a 57-year-old classical music composer, originally from Puerto Rico. James Carter is a 42-year-old jazz saxophonist from Detroit. On the surface, these two musicians might appear to have little in common, but on Caribbean Rhapsody, a new album released last week, they prove to be smart collaborators, fusing elements of classical and jazz in ways that sound completely natural. The album is the culmination of a 10-year collaboration between Carter and Sierra, who wrote both the Concerto for Saxophones and Orchestra (a Detroit Symphony commission) and Caribbean Rhapsody for Carter.

As a fan of Sierra's work, the CD caught my attention, and it also piqued the interest of my colleague, Patrick Jarenwattananon, the proprietor of A Blog Supreme, NPR's jazz blog.

Tom Huizenga: Patrick, I saw the new album by saxophonist James Carter and noticed it was a collaboration between him and the classical composer Roberto Sierra. If they can collaborate, why can't we? It seems like a pretty swell intersection of jazz and classical.

Patrick Jarenwattananon: Hopefully, we can be the same. So many times we get "jazz meets strings," or "jazz meets classical" where you make neither side happy. But here, I sometimes have trouble telling where the composition ends and the improvisation begins. Perhaps that's because James Carter is such an amazing player.

TH: And that's what hooked Sierra. He heard Carter play a concert with soprano Kathleen Battle back in 2001. Afterward, he found Carter backstage and said he wanted to write a concerto for him.

I remember when Carter's debut album appeared in the early 1990s, causing quite a stir. I have to admit I've lost touch with his progress of late, but listening to him play on this record, one thing is obvious, he is in total command of his saxophones – both alto and tenor. Do jazz folks think of him as some kind of super-virtuoso? 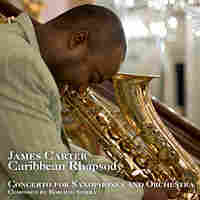 PJ: Indeed. When JC On The Set came out way back when (1994, I think), it made serious waves. He was all of 25 years old, which is still super young by jazz standards. If there's a thing that critics point out most about him, it's that he's perhaps too virtuosic – i.e. prone to showboating in excess, or lacking direction with his playing. We recorded his organ combo at the Newport Jazz Festival a few years back – you can make up your own minds about that.

I'll tell you something else about Carter, though. He's made a fair amount of concept projects, like, he seems to be down for whatever interesting combination of instruments or programmatic thing gets thrown at him. He's made tributes to Billie Holiday and Django Reinhardt – some 40-50 years after their deaths – and even was a part of Gold Sounds, a jazz quartet re-envisioning of the celebrated indie rock band Pavement. So it's not surprising that his 1) virtuosity 2) curious spirit would be tapped for this.

Tell me about who he's working with. I admit I don't know much about Roberto Sierra.

TH: Roberto Sierra is an agile and thoughtful 57-year-old composer, originally from Puerto Rico. And you can hear a lot of his homeland come through in the two works he's written for Carter on this album – Concerto for Saxophones and Orchestra and Caribbean Rhapsody. He was a runner up for a Pulitzer Prize in 2008, and I expect him to win one someday. He studied with one of the 20th century's greats, the Hungarian composer Gyorgy Ligeti. Sierra's music, though, is a far cry from Ligeti's.

Sierra's style is pretty broad — basically tonal, sometimes overtly lyrical. But I remember some years ago reviewing the world premiere performance of his piece Kandinsky for the Washington Post and in that work, he tried imitating the famous artist's bold slashes and free-floating blobs of color in a more atonal way, with clusters of chords and icy, crystalline glissandos. To my mind, some of it worked, some didn't. In this album, though, the music — especially in the Caribbean Rhapsody — has the flavor of Puerto Rican dances.

He teaches composition at Cornell University. Great orchestras around the world have performed his music. He's a little underappreciated, perhaps, although he's won his fair share of awards.

PJ: That's funny that he's studied with Ligeti. As you said, this music is basically tonal, and I definitely hear some sort of folk rhythms coursing through the "Caribbean Rhapsody." But I also hear that 20th Century high modernism thing emerge, with lots of interesting dissonances, especially in the concerto. In the third movement "Playful – Fast (With Swing)," you get this long tour through the forest of timbres, with Carter on soprano sax, and then his tenor saxophone cadenza. (Did I mention he can play all the saxophones, all really well?) Halfway through some honking, Carter kicks off a serious blues number. It's a little disjointed, but it works. What do you think?

TH: Sierra says the third movement is his version of a scherzo (in classical music, that's the movement where the composer lets his/her hair down a little – "scherzo" means joke.) And you can hear some witty angularity playing off some very chromatic strings, as you mention. They have a kind of Bartok-like edge to them. This is perhaps the most virtuoso movement for Carter, with that brilliant solo, a mini-cadenza of sorts, at about 3:15 into the movement that morphs into something very funky. Then I love that point — a little calm before the storm really — where strings are in soft tremolo, with murmurs in Carter's sax both low and high, then bang! A full-tilt boogie finale that rocks, just like a good classical concerto should.

Overall, what I like about this sax concerto is that it lets the sax primarily live in its natural jazz habitat. It truly is a hybrid of a jazz saxophonist doing his thing in a classical context. But the beauty is, when you hear it, you don't think about such pointy-headed issues. The music just is what it is, and it's quite good.

But that's not the only Sierra/Carter combo on the album, there's also a 13-minute piece called "Caribbean Rhapsody."

PJ: Indeed. It ought to be mentioned that there are two Carters on this track: James Carter, again on soprano (early) and tenor (later) saxophones, and Regina Carter on violin. They're cousins, acclaimed jazz improvisers both, and both from Detroit. You hear a lot of back and forth between them, especially in the second half of this piece, with that very Caribbean clave feel that you hear everywhere in Latin music.

And that last part swings like it does in part because there are other players who can both read complicated music and improvise (if called upon, though they aren't really here, I think). Cellist Akua Dixon is fluent in jazz and put together the string quartet. On top of the string quartet, sax and solo violin, jazz bassist Kenny Davis is anchoring it all, which assures a rock-solid time feel.

TH: I love how Carter's soprano sax integrates sweetly into the fabric of strings in the opening of the piece, in a kind of bolero rhythm, with Regina and the string quartet. There's a gorgeously expressive sax solo that marks the second section at about 4:30 in. And some nice solo space for Regina, who knows a thing or two about cross-pollinating genres herself. She stopped by to give a Tiny Desk Concert here at our office and had both an accordionist and a kora player in tow. I, too, like that lengthy duet for the Carters, and then, in the final few minutes, the Puerto Rican dances come out to play — a veritable salsa party, with call and response solos from the Carters. Lots of fun.

Question is: who will this album appeal to? Will jazz fans like it if there's a strong sense of classical music; and will classical people be into Carter's jazz sax?

PJ: Well, I think a lot of jazz fans are often into classical music too – they like good writing and good playing, whichever form it takes. I think those who critique Carter for being too all-over-the-place will find some nice direction for him here, even in the solo improvisations. And I think having meaningful grooves – not a Pops orchestra playing a silly movie-theme waltz, but actual legit swing and sway – this is key. As for folks who identify themselves as mostly classical fans, I'd like to think the strength of Carter's playing here will do something. He's not exactly playing in the dirtiest, muddiest, greasiest mode (perhaps that has something to do with the way the concerto was recorded, in such a seemingly cavernous space) which could count either for or against him. I dig it, though.

TH: I like it too. And I agree, the strength of the playing and composing is compelling. It shouldn't be thought of as a crossover project — instead, as just two very accomplished musicians who have much to say when their musical worlds intersect in a remarkably satisfying way.