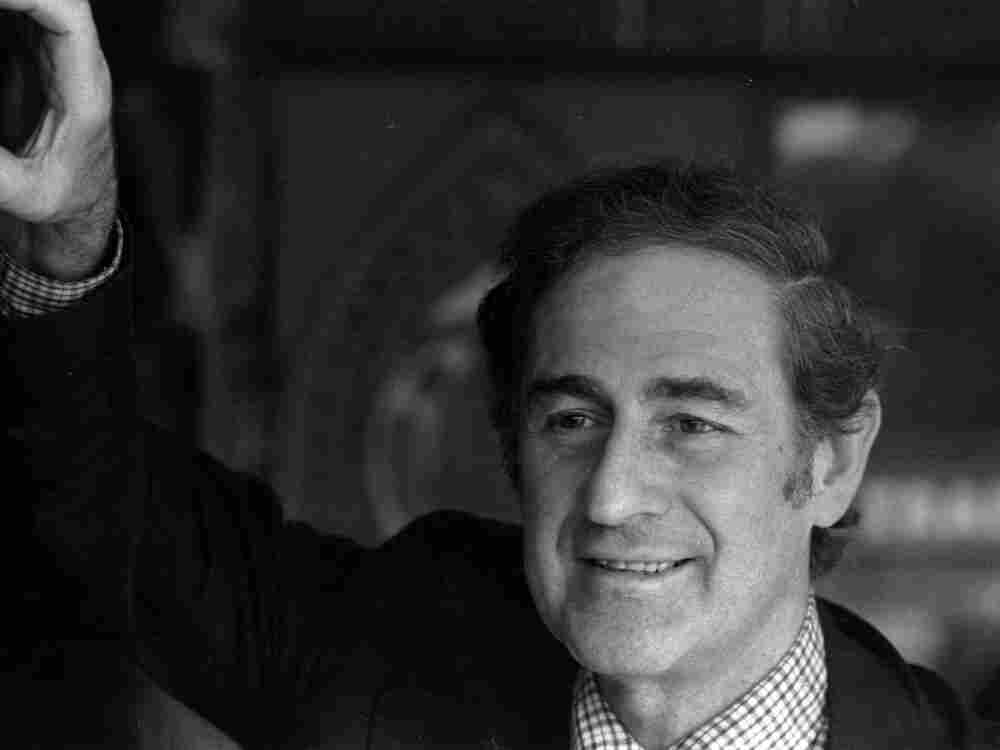 One hundred years ago, in a country town on Italy's Lake Lugano, Gian Carlo Menotti was born. It didn't take long before little Gian Carlo took pen to music paper. By the time he entered the Milan Conservatory at age 13, he'd already composed two operas.

On the 100th anniversary of the composer's birth, Morning Edition music commentator Miles Hoffman makes a case for Menotti as one of the greatest composers of the 20th century.

"He was a pioneer," Hoffman says. "He came to this country as a teenager, studied at the Curtis Institute and had courage to write operas in English, starting in the 1930s, when no other American really did. Certainly, no other American composer was able to do it so successfully."

Hoffman says Menotti was also a media pioneer. After considerable success with his first opera in America, the composer was approached by NBC to write a work specifically for radio. On April 22, 1939, Menotti's The Old Maid and the Thief was broadcast. Later, Menotti found even greater success with Amahl and the Night Visitors, the first opera commissioned for television. It made its debut on NBC on Dec. 24, 1951, and became a Christmas Eve broadcast tradition. The roles were carefully crafted so that amateurs as well as professionals could perform the work, rendering it one of the most performed operas.

But should Menotti be ranked with the composer heavyweights of the 20th century, like Stravinsky, Copland, Shostakovich, Schoenberg and Messiaen? Hoffman says he thinks so.

"You have to ask the question, 'Who wrote music that will last — music that people will be listening to 100, 200 years from now?' " Hoffman says. "I believe one of the answers will be Gian Carlo Menotti."

Hoffman points to the aria "To This We've Come," from The Consul, to explain the composer's staying power.

"It's astonishingly dramatic music, incredibly effective," he says. Below, watch soprano Patricia Neway, who sang in the original production.

Patricia Neway sings "To This We've Come" From The Consul. YouTube

The fact that the The Consul opened at the Ethel Barrymore Theatre on Broadway (in 1949) is important. It was an opera that was both a Broadway hit and a Pulitzer Prize winner.

"Menotti thought it was crucial to bring opera to a large popular audience," Hoffman says. "He once wrote, 'If I insist on bringing my operas to Broadway, it is simply because of the letters I receive which begin, "Dear Mr. Menotti, I have never seen an opera until tonight." ' "

Menotti's operas The Medium, The Telephone and Maria Golovin were all produced on Broadway.

Another reason Menotti's music will last, Hoffman says, is that he knew how to write for the voice.

"His music makes singers sound good," he says. "One of Menotti's strengths is that he was able to write lovely, beautiful music."

Along with his talents as a versatile composer, director and librettist, Menotti was a formidable impresario. He founded the Spoleto Festival in Italy in 1958 — and then, in 1977, Spoleto USA in Charleston, S.C.

"He did this all through personal magnetism and connections, and because people wanted to do what Menotti wanted them to do," Hoffman says. "He was a lot of everything — charming, brilliant, funny. He was also difficult. He apparently fired everyone he ever hired. But he was also absolutely irresistible."

Does Gian Carlo Menotti rank with the greatest composers of the 20th Century? Commentator Miles Hoffman has made his case. What do you think? Let us know your thoughts in the comments section.