Accessibility links
Why Rehearsals Matter At Marlboro : Deceptive Cadence At the 60-year-old festival, the journey through rehearsal is as important as reaching the final destination when it comes to practicing a piece of music. 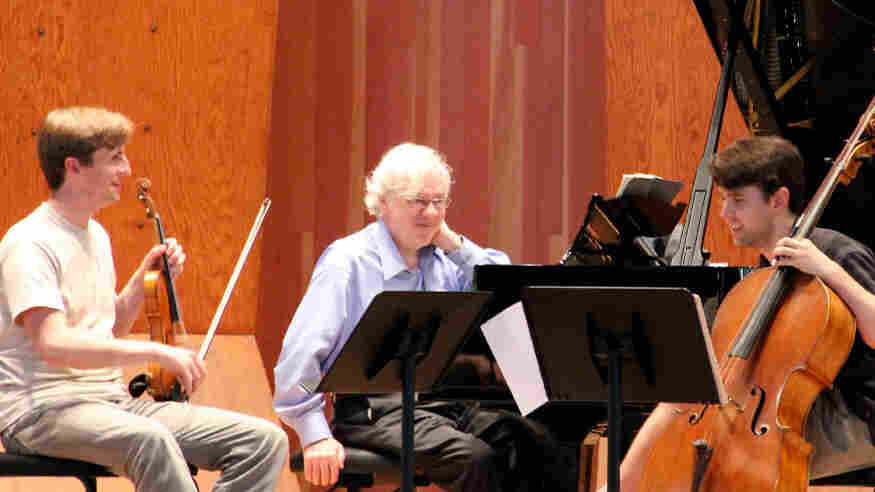 When a sour economy puts the squeeze on classical music presenters, rehearsals can fall prey to fiscal belt-tightening. As orchestras and opera companies struggle to keep a tighter rein on overtime, rehearsal venues pass on their overhead costs to musicians. It's not uncommon for a chamber music recital in a major city like New York to get just one rehearsal prior to a performance.

With time a precious commodity, it seems downright bizarre to learn that musicians are lavishing up to 20 hours on an octet by the long-forgotten Louis Spohr – and only then deciding if it's ready for a prime-time audience. But that's what happened during the opening weekend of the Marlboro Music Festival this year. Rehearsals are the lifeblood of this annual event, which is celebrating its 60th year on the tiny campus of Marlboro College, a converted dairy farm on a remote hillside in southeastern Vermont.

The idea is to have as rich and varied and full a musical experience as possible.

It can be tough to wrap one's head around the old-school Marlboro concept at first — a fact that's not helped by the heavy air of reverence that surrounds the festival, which can be off-putting to a first-time visitor. Histories of the festival founders – including pianist Rudolph Serkin and violinist Adolph Busch — can read like biographies of Gandhi or Mother Teresa and imply that nowhere else is music-making approached with such seriousness of purpose and integrity. And Marlboro is hardly on the vanguard when it comes to contemporary music, multimedia or technology for that matter — cell phone reception, for example, is almost nonexistent.

Nevertheless, the festival can count itself as a genuine laboratory or think tank, where young artists deepen their knowledge and broaden their perspectives about music that audiences often take for granted. It's also a place where major soloists – some of whom could earn great sums on the summer-festival circuit – come to work for little or no pay, even funding their own transportation to and from the festival. Some 70 to 80 musicians, ranging in age from early 20s to early 80s, live in modest dormitories on the picturesque campus. There are no teachers or students at Marlboro, only "participants."

According to Frank Salomon, the festival's longtime co-administrator, upwards of 230 to 250 pieces are rehearsed each summer, which means that the typical participant works on three to five pieces for as many as 30 hours a week. Just a small percentage of those works are performed.

We're All Immersed In It

"This is a place where people get together in order to immerse themselves in what they love, and to rediscover the reasons why they love it," says pianist Richard Goode, who is Marlboro's co-artistic administrator with pianist Mitsuko Uchida. "Mostly we're not thinking about the outer world at all. We're all immersed in it in some way, but here the idea is to have as rich and varied and full a musical experience as possible."

At a dress rehearsal for the Piano Trio in B Major by Brahms, one could sense how quickly such lavish rehearsal time can be taken for granted — and how tough it must be to readjust to the real world after Marlboro's season ends. Goode asked for a restart at a particular moment in the players' parts. At the next stopping point, David McCarroll, the violinist, wanted to go back to drill that part again. Andrew Janss, the cellist, commented on something else even earlier. But then Goode recalled something else, even farther back. "In that case, let's do three before 25," Goode said, putting things almost back to where they had started the time before.

Another Brahms piece, the Two Songs, Op. 91, was rehearsed repeatedly over the weekend by mezzo-soprano Jennifer Johnson Cano, violist Helene Clement and Uchida. Here the usually outspoken pianist tended to couch her suggestions in deferential terms ("if everyone agrees"), while her younger colleagues seemed unafraid to speak up. The musicians hashed out tempos, accents and phrasing. The rapturous reception at the Sunday afternoon performance suggested their work had paid off.

One might argue that these days musicians should be less concerned with technical perfection and more with the social aspects of their work – connecting with the community, teaching and proselytizing on behalf of the art form. No doubt those things are important. But a piece like the Spohr Octet serves as a case study: While not a masterpiece, the offbeat and quirky work could only succeed through a carefully prepared performance.

"This is a piece that needs a sense of style and a way of playing that allows for different voices to come out," explained Charles Neidich, the clarinetist in the ensemble. "It's a piece that needs an understanding of how witty it is and how charming it is in order to make it sound good. If it has a single generic performance, nobody will get any impression out of it."

This week, we're taking a closer look at the Marlboro Music Festival. Tomorrow, see a slide show of Marlboro musicians over the festival's 60-year history.