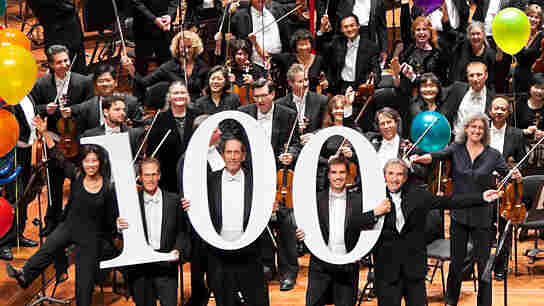 At 11 p.m. EDT, American Public Media will host a live webcast of the concert with hosts Julie Amacher and Rik Malone.

San Francisco's musical history is rich, and reaches back far beyond the Symphony's origins to the Gold Rush days of the 1850s. The area's new wealth and opportunities drew people from nearly everywhere, including European musicians like Miska Hauser, a Hungarian violinist who landed in San Francisco in 1853 and proceeded to organize orchestras and concerts. The San Francisco Philharmonic Society was founded in 1852, giving a performance of Rossini's Stabat Mater. By 1866, at least 17 choral societies had sprung up in the city.

Below is an excerpt of the very first San Francisco Symphony recording. Hertz leads the overture to Auber's opera Fra Diavolo, recorded Jan. 19, 1925 and released by RCA seven months later. (This version was superbly restored by Mark Obert-Thorn and released on Pristine Classical.)

Listen: The San Francisco Symphony Then And Now 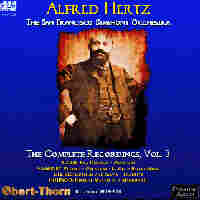 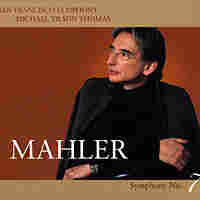 In its early decades, the San Francisco Symphony hosted some historic firsts. The 7-year-old Yehudi Menuhin debuted in 1924 and Isaac Stern, just 15 years old, appeared with the orchestra in 1936. The Great Depression shuttered the Symphony for the 1934-35 season, but in the next season the orchestra began to make great strides under its new music director Pierre Monteux. He took the musicians on the road across America and led the ensemble in more than 40 recordings.

Tilson Thomas' innovative programming may not be so obvious in this centennial opener, but it certainly continues in this 100th anniversary season. There will be premieres of commissions by John Adams and electronica composer Mason Bates. And plans are set for an American Mavericks series spotlighting music by John Cage, Morton Feldman and Lou Harrison.