Accessibility links
Hey, Kids, It's Vinny Pookh Time! Cartoon Music From The U.S.S.R. : Deceptive Cadence Who wrote music for kids' cartoons in the Soviet Union? Would you have guessed — Dmitri Shostakovich? A Brooklyn Philharmonic concert prompts a new look at this classic animation. 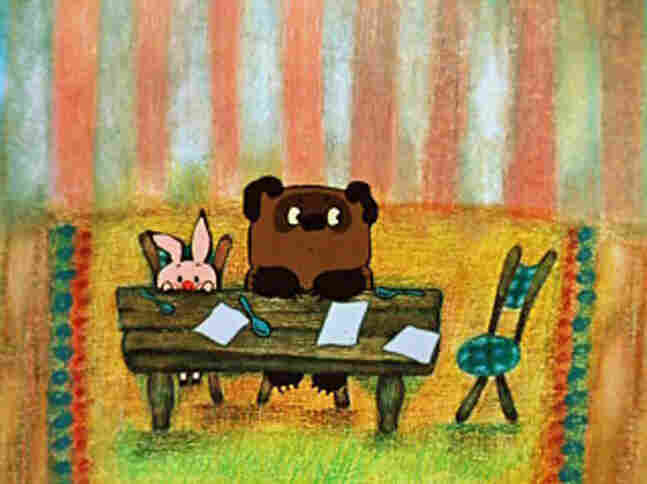 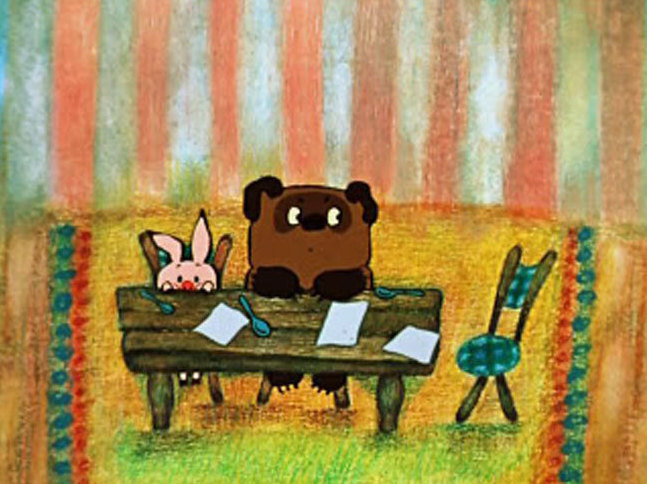 Twentieth-century Russian music is often thought of as dark and brooding, a reflection of life under the thumb of a brutal state. When it was funny, it usually had a kind of gallows humor.

Yet many of the same composers whose concert works often reflected a dark reality also wrote cartoon music for kids. Thursday night, the Brooklyn Philharmonic is playing some of these cartoon scores in Brighton Beach — the heart of the Russian-American community in New York City. For some of its creators, cartoon music offered a certain kind of escape.

In 1939, composer Dmitri Shostakovich had already survived being denounced in the official newspaper of Stalin's regime . But 1939 was also the year Shostakovich turned out a merry cartoon score: The Silly Little Mouse.

Composing for films and theater offered Shostakovich a chance to earn income. But that doesn't mean that he and his contemporaries watered down their work, says Alan Pierson, the Brooklyn Philharmonic's new music director. "These composers weren't slumming it, doing this," Pierson observes, "and part of what makes this a compelling concert is that the music that they wrote for the genre is really sophisticated and really interesting music."

"It's music which — as cartoon music and film music should — immediately conveys a sense of mood, atmosphere and scene in a way that has an immediate impact on people," Pierson continues. "And yet, the harmonic and tonal language and timbral language of the music is really, really complicated and sophisticated."

The Silly Little Mouse takes its inspiration from a popular children's tale written in 1922 by Samuel Marshak. Lora Mjolsness, director of the program in Russian studies program at the University of California, Irvine, points out that artists of all kinds were under intense ideological pressure — and some of them found a creative escape hatch in children's stories.

"During this time, a lot of animators turned to the fairy tale," Mjolsness says. "The tale allowed animators to draw on national heritage and to focus sort of on timeless moral instruction, skirting away from overt ideology."

As decades passed and restrictions on artists loosened, animators began experimenting again. Eventually, one of the world's most beloved children's characters took on a Russian accent. In 1958, A.A. Milne's famous, honey-loving bear became "Vinny Pookh." Nine years later, this Pooh got his own Russian cartoon.

The music for Vinny Pookh was penned by Mieczysław Weinberg, a Jewish composer who fled his native Poland in 1939 and headed east to the Soviet Union. The rest of Weinberg's family stayed behind and perished in a concentration camp.

Weinberg became a great friend and colleague to Shostakovich. And despite the widespread persecution of Soviet Jews — he himself was briefly jailed in 1953 — Weinberg's concert music was performed in his new home.

This Polish Jewish immigrant, now known as Moisei Weinberg, also created some of the most iconic bits of Russian pop culture, including the music for the 1969 cartoon Vinny Pookh V Gosti ("Winnie the Pooh Goes Visiting").

Vinny Pookh wasn't the only outsider to wend his way into Soviet animation. The 1969 cartoon The Bremen Musicians was very lightly based on a Grimm fairy tale. But its score by Gennady Gladkov flows along a modern current with its electric guitar.

Ljova Zhurbin, a Moscow-born composer, arranger and violist observes, "It feels like under these cartoons there's a certain kind of counterculture itch. You can't exactly place it."

Now based in New York, Ljova, as he's known, is the son of one of Russia's best-known film and theatrical composers, Alexander Zhurbin. The Brooklyn Phil is playing one of Ljova's original scores along with several of his arrangements.

"You almost feel like these cartoons are not entirely just for kids, but they're actually for the adults," Ljova notes. "They always keep trying to push the envelope, whether it's musically by using rock 'n' roll, which was not entirely approved at the time, or with characters doing bizarre, unruly things."

Ljova says that the music matches the animation. "Everything is an incredibly imaginative approach to scoring, to orchestration, to styles," he says enthusiastically. "You would hope that somebody would write things with so much optimism and so much integrity for a background piece of music."

With tonight's concert, the Brooklyn Philharmonic hopes to bring these cartoon scores into the foreground.

A totally Russian redo of this beloved bear — with visuals reminiscent of Eric Carle's children's books.

From 1969, "The Bremen Musicians" — with flared trousers and miniskirts.