Accessibility links
Double-Blind Violin Test: Can You Pick The Strad? : Deceptive Cadence Researchers presented a group of professional violinists with a set of violins and asked them to play and then determine — based on sound alone — which were made by the famed Italian violin-maker Stradivari and Guarneri. The results surprised everyone, including the pros themselves. 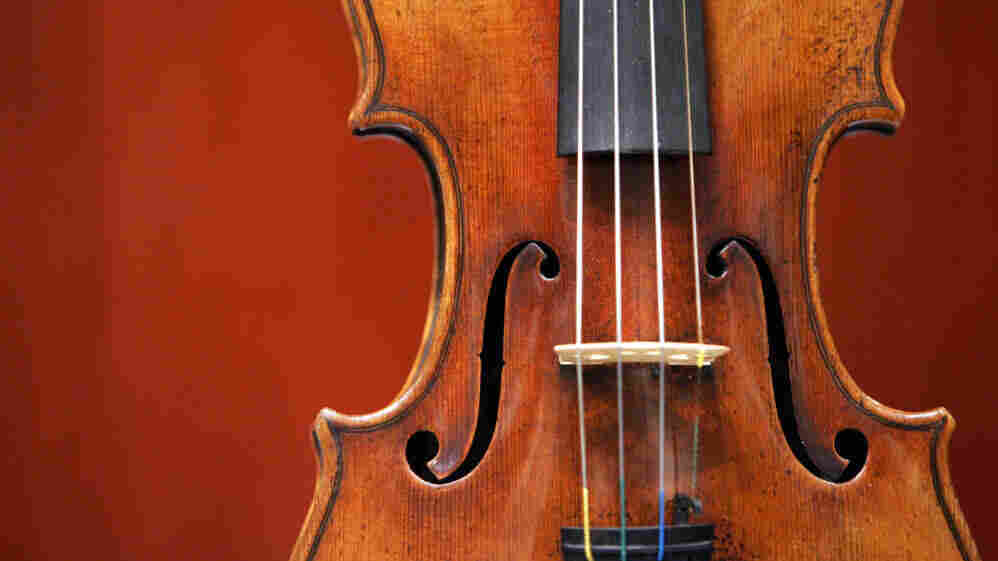 In a double-blind test by professional violinists, most couldn't determine — by sound alone — which violin was an original Stradivarius and which was a modern instrument. Above, a 1729 Stradivari known as the "Solomon, Ex-Lambert." Don Emmert/AFP/Getty Images hide caption 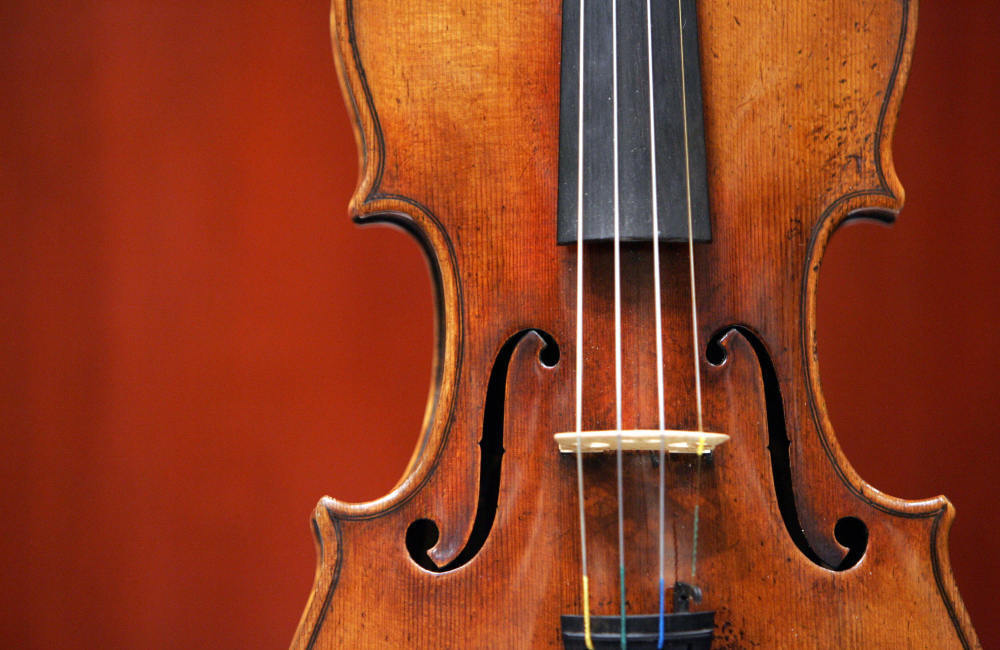 In a double-blind test by professional violinists, most couldn't determine — by sound alone — which violin was an original Stradivarius and which was a modern instrument. Above, a 1729 Stradivari known as the "Solomon, Ex-Lambert."

In the world of violins, the names Stradivari and Guarneri are sacred. For three centuries, violin-makers and scientists have studied the instruments made by these Italian craftsmen. So far no one has figured out what makes their sound different. But a new study now suggests maybe they aren't so different after all.

OK, here's a test. Clip one is a musical phrase from Tchaikovsky's Violin Concerto in D Major. Clip two is the same phrase. The same musician plays both. But one is on a Stradivarius violin, the other on a violin made in 1980. See if you can tell the difference.

It's a tough choice. But a professional violinist could tell the difference, right?

Well, a research team recently tried to find out. They gathered professional violinists in a hotel room in Indianapolis. They had six violins — two Strads, a Guarneri and three modern instruments. Everybody wore dark goggles so they couldn't see which violin was which.

Then the researchers told the musicians: These are all fine violins and at least one is a Stradivarius. Play, then judge the instruments.

Joseph Curtin, a violin-maker from Michigan, was one of the researchers. "There was no evidence that people had any idea what they were playing," he says. "That really surprised me."

Curtin says of the 17 players who were asked to choose which were old Italians, "Seven said they couldn't, seven got it wrong, and only three got it right."

Claudia Fritz designed the experiment. She's an acoustics physicist from France's National Center for Scientific Research — and a flute player, by the way. She says this test was more rigorous than previous ones because it was "double-blind" — no one knew which instrument was which until after the test. That rules out the kind of bias that might creep in when a musician judges an instrument he or she knows is 300 years old and maybe played by someone like Fritz Kreisler or Henryk Szeryng.

And this experiment asked seasoned violin players, not listeners, to choose.

"'Ah, it's just a bit too new for me'," she recalled one musician saying. "And it was a Strad. Another one said, 'Ah, I love the sound of this one, it really has the sound of an old Italian, ah, just so warm.' And it was a brand new violin. "

When Fritz asked the players which violins they'd like to take home, almost two-thirds chose a violin that turned out to be new. She's found the same in tests with other musical instruments. "I haven't found any consistency whatsoever," she says. "Never. People don't agree. They just like different things."

In fact, the only statistically obvious trend in the choices was that one of the Stradivarius violins was the least favorite, and one of the modern instruments was slightly favored.

Now, what does that mean for all the years of research studying the old violins — the design, the wood, the varnish, even the glue? If no one can tell the difference, what's the point?

"People looked at the violin, tried to understand how it vibrates, what are the mechanics behind it," she says of past research. "But nobody has really looked at the human side." She says her research is aimed at determining how people choose what they like, and what criteria they use.

Curtin has spent years trying to capture the quality of old-world instruments. But he's not discouraged by the results. "If new violins get better, it doesn't mean old ones get worse," he says. "The question is, Can the sound be gotten from a new instrument, as well as an old one?"

The old Italians certainly sound great, but not necessarily better or even that different from the best new ones, he says. It's more in the mind, or ear, of the listener.

Dale Purves, a professor of neuroscience at Duke University, says the research "makes the point that things that people think are 'special' are not so special after all when knowledge of the origin is taken away."

Oh, yeah, the test: Which of the two phrases we played came from the Stradivarius? The second one.