Accessibility links
For Orthodox Easter, Music That Faces East : Deceptive Cadence Some 300 million Christians around the world are celebrating Easter today — and their music and art are grounded in a cultural and religious crossroads. 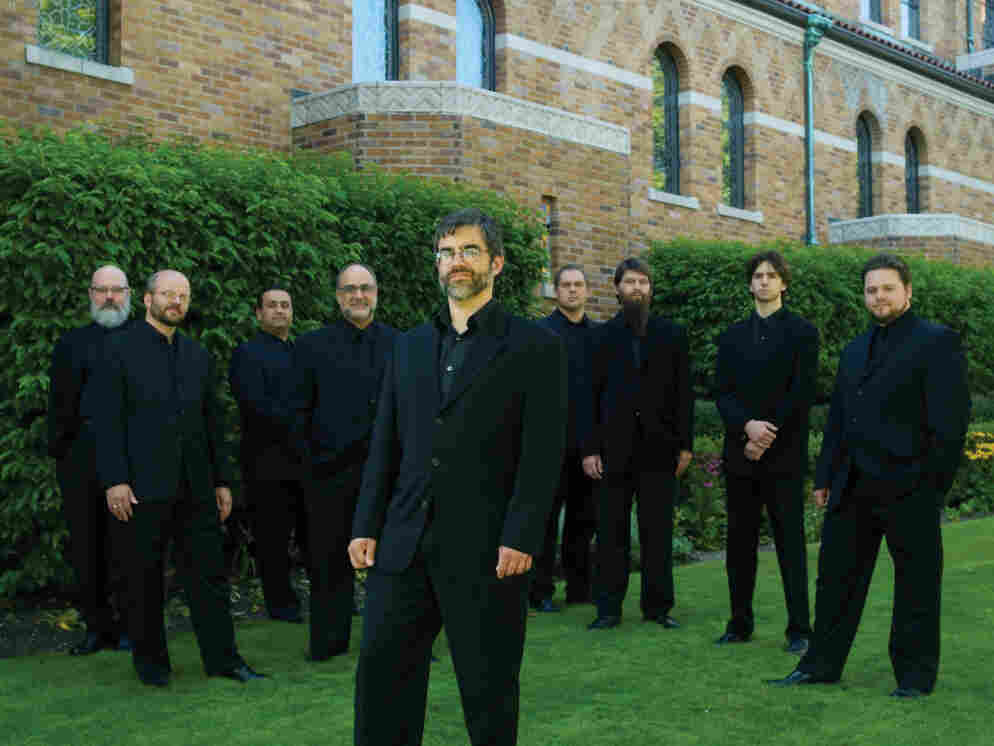 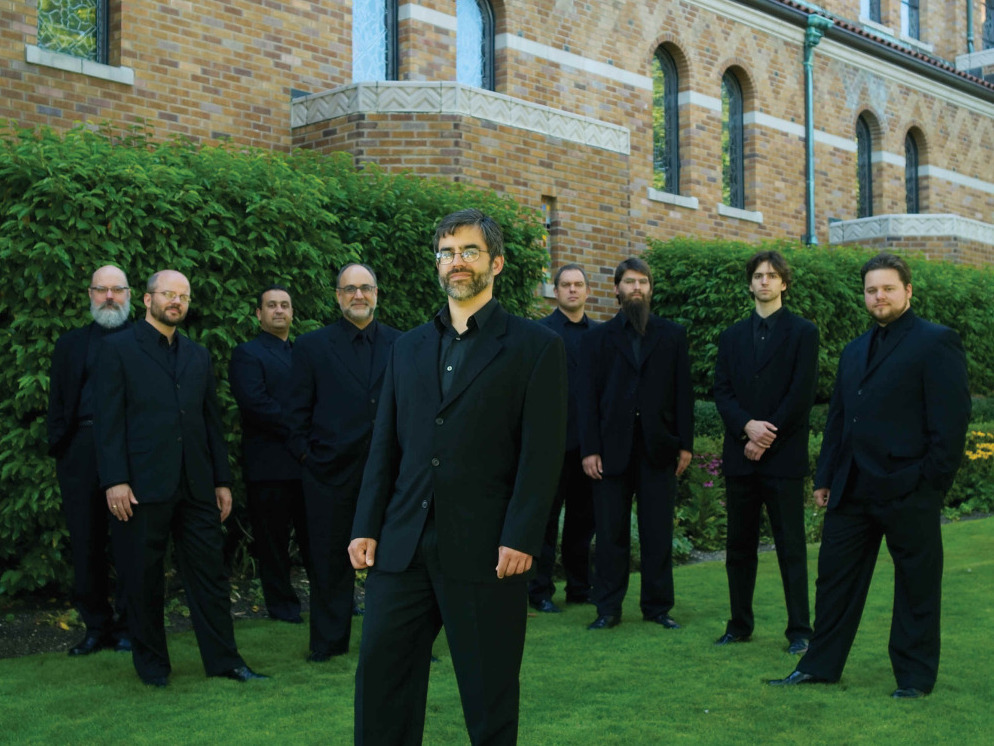 Do you think Easter has already passed this year? Not quite. For about 300 million Eastern Orthodox Christians around the globe, Easter is actually today, April 15th. From Jerusalem to Athens, Ethiopia to Moscow and Portland, Maine to Portland, Ore., believers ushered in their holiest day of the year at services held just at the cusp of midnight.

As a new exhibition and a recent concert at New York's Metropolitan Museum make clear, much of the history and arts of these Christian communities is very firmly rooted in Eastern soil. 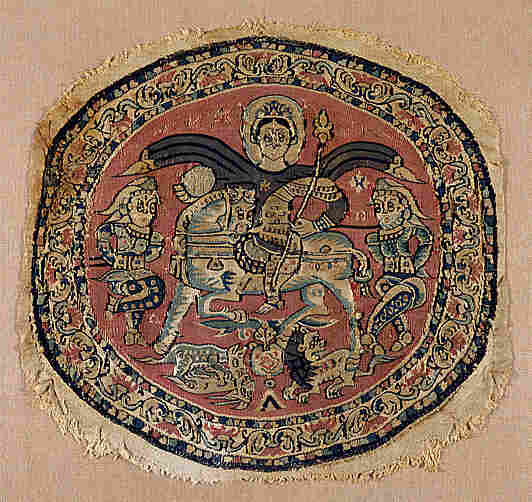 An 8th-century roundel featuring a Byzantine emperor (probably Heraclitus) on exhibition at the Metropolitan Museum of Art. courtesy of the Victoria and Albert Museum, London hide caption

toggle caption
courtesy of the Victoria and Albert Museum, London

The liturgical music that was heard around the Byzantine Empire centuries ago isn't all that far from what you still hear in Greek Orthodox churches around the world today. Cappella Romana, a choral group based in Portland, Ore. specializes in singing medieval Byzantine music. The ensemble was founded in 1991 to explore the musical traditions of both Eastern and Western Christianity. Its founding artistic director, Dr. Alexander Lingas, says his group tries to reflect early Christianity's geographical sweep.

"The thing is," Lingas says, "you start on the basis of a single Roman Empire that had as its borders Scotland on the one hand — the emperor Constantine was born way up in the British Isles [actually, Constantine the Great was born in what is now Serbia, but was named as emperor near York, England -AT] — and you had essentially a Mediterranean tradition."

Back then, both the Byzantines and their neighbors called this empire the Roman Empire. We're talking the seventh to ninth centuries; there were thriving Jewish communities, several Christian factions and a burgeoning Muslim presence. And what we today call the Byzantine Empire was the hub of the universe, says Helen Evans, the curator for Byzantine art at the Metropolitan Museum of Art, who organized a new exhibition called "Byzantium and Islam: Age of Transition."

"It's this incredible economic power, these amazing trade routes, a controlling force — it's not the eastern edge of Western Europe," Evans says. "It was the center of the world for most of its history. The world was seen as being centered in Jerusalem, the Holy Land, and expanding out."

Lingas concurs: "Christianity is an Eastern religion, which we tend to forget sometimes." 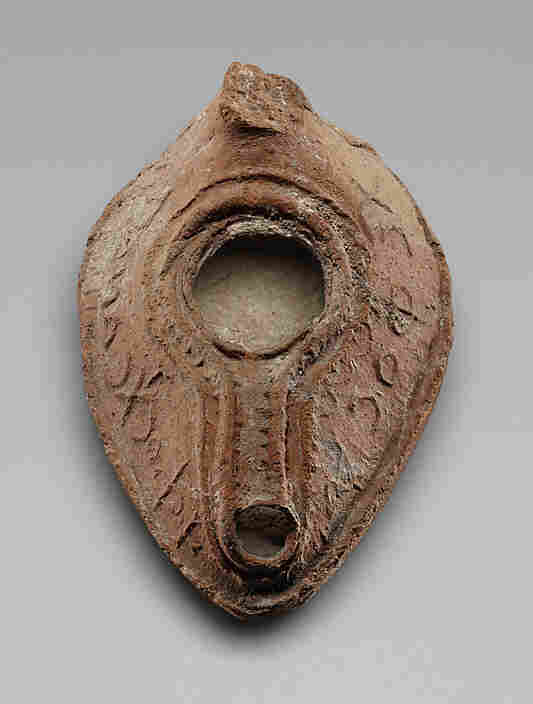 An 8th-century oil lamp with a Christian phrase in Greek and Muslim blessings in Arabic now on display at the Metropolitan Museum. courtesy of Yale University Art Gallery hide caption

The intersection of religions and cultures is at the heart of the Met exhibition. It includes a selection of small ceramic oil lamps, which scholars believe were all made in the 8th century in the same workshop in what's now northern Jordan. But here's the twist: Each of the lamps is decorated according to the different religious inclinations of their potential buyers. There are crosses for the Christians, Islamic blessings in Arabic for Muslim shoppers, and a simple floral design for maybe a more secular-minded consumer. One particularly intriguing lamp says in Greek on one side: "The light of Christ is the Resurrection." But on the bottom of the same object, in Arabic, the lamp bears the common Muslim bismillah phrase: "In the name of God, the Merciful, the Compassionate."

"What we were trying to do in the exhibition," Evans says, "was to show that you have this multiplicity of people. We tend to think that there was this kind of black/white, that there was Islam, everybody's Muslim, that's one group — and they never speak to the other side, which is Christian, or Jewish, and that those two groups don't speak to each other either, and they all live in test tubes and they never have to go shopping at the same fruit market. It's just not true!"

Hear The Proemium from the Vespers of St. Catherine

Hear A Sticheron (Hymn) from the Vespers of St. Catherine

The museum invited Cappella Romana to make that point musically, and the ensemble released a new album, Mt. Sinai: Frontier of Byzantium, to coincide with the Met show. For half of their performance, the selections were culled from music that would have been heard on Holy Friday, the Friday before Easter, in Jerusalem in the early 10th century. The other half of the program is music that was sung at the St. Catherine of Alexandria monastery in the Sinai.

At The Met: A Middle East Transition, Centuries Ago

Lingas says it's essential to remember this music is a living tradition that connects the far-flung roots of early Christian history to today.

"You have types of scales and ways of singing vocal ornaments that are not what Western classical singers are used to doing," Lingas says. Instead of standard Western vocal technique, he and his singers use a different vocal placement, a more Eastern-sounding vocal timbre, and what he calls "the same notes but with a few added little twiddly bits in between."

Facing east on this Easter Sunday, it's important to remember the twiddly bits that bind cultures.