Accessibility links
Britten's War Requiem: 50 Years On, Still As Harrowing As Ever : Deceptive Cadence A stellar new recording from the London Symphony Orchestra of Benjamin Britten's masterpiece reminds listeners of a poignant and ever-timely piece of music.

Britten's War Requiem: 50 Years On, Still As Harrowing As Ever

Britten's War Requiem: 50 Years On, Still As Harrowing As Ever 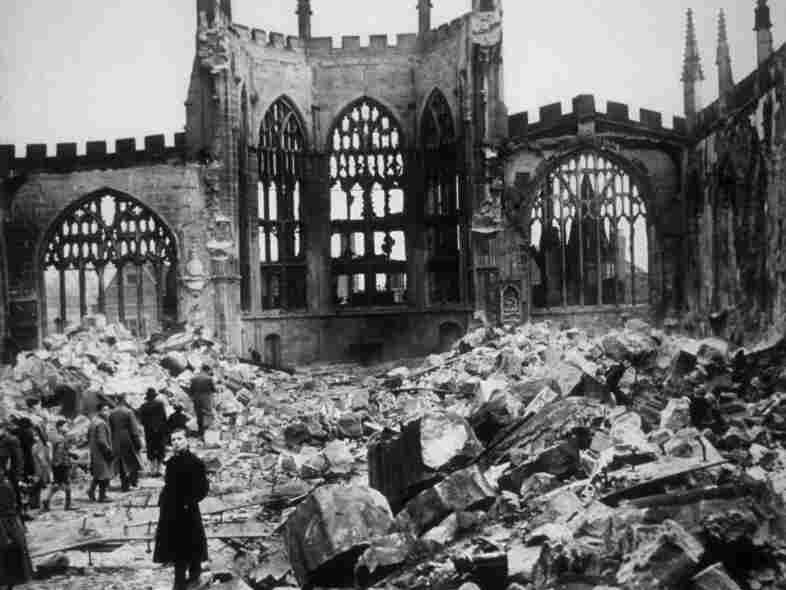 Coventry Cathedral in ruins, November 1940. Britten's War Requiem was written for the church's reconsecration more than 20 years after it was destroyed by Nazi bombers. Central Press/Getty Images hide caption 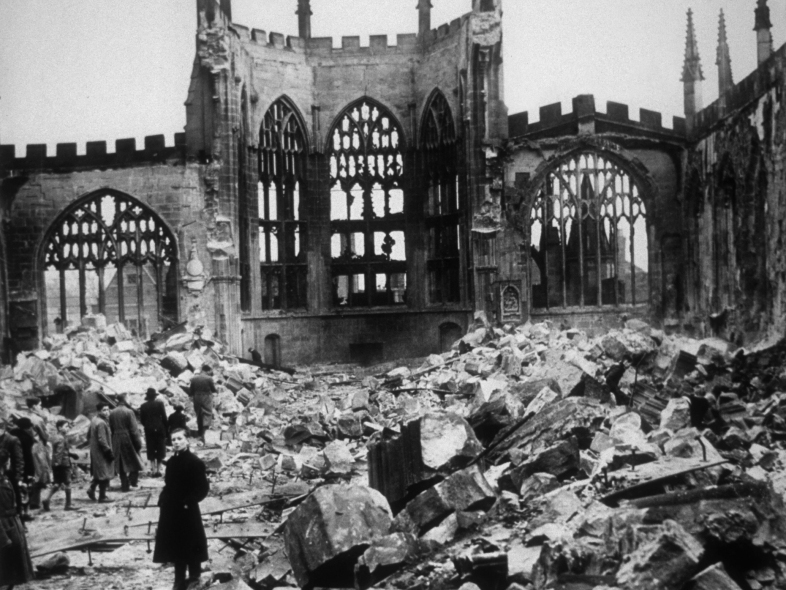 Coventry Cathedral in ruins, November 1940. Britten's War Requiem was written for the church's reconsecration more than 20 years after it was destroyed by Nazi bombers.

There are two war-related anniversaries this week that make today's album review all the more timely. Yesterday was Memorial Day here in the U.S.; tomorrow, May 30, marks 50 years since the world premiere of English composer Benjamin Britten's War Requiem at Coventry Cathedral. The War Requiem was commissioned for the cathedral's reconsecration after it had been destroyed by a Nazi bombing raid in 1940. Britten's choices for the three soloists were laden with deep meaning: they were his partner, the British tenor Peter Pears; the German baritone Dietrich Fischer-Dieskau; and the Russian soprano Galina Vishnevskaya. The Soviet regime ultimately barred Vishnevskaya from traveling to England for the premiere, but she did later receive permission to record the piece in London; the resulting recording, led by the composer himself, has been the work's standard-bearer.

Britten's work is harrowing and mournful, with its extraordinary interweaving of the traditional Requiem text and poetry by Wilfred Owen (who was killed in action by a sniper a week before the end of World War I) in a bright, bold and beautiful musical style. And there's no mistaking Britten's political intention. On the title page, he quotes Owen: "My subject is War, and the pity of War./The Poetry is in the pity.../All a poet can do today is warn." And the central axis of the piece is Owen's retelling of the Biblical story of Abraham and his son Isaac, who in this case is not saved by an angel's intercession. Instead: "When lo! an angel called him out of heaven,/Saying, Lay not thy hand upon the lad,/Neither do anything to him, thy son./... But the old man would not so, but slew his son,—/And half the seed of Europe, one by one."

One Sunday afternoon last October, the London Symphony Orchestra brought the War Requiem to Lincoln Center for the White Light festival, with Gianandrea Noseda conducting (having stepped in for Colin Davis) and the same three soloists on this new recording: soprano Sabina Civlak, tenor Ian Bostridge and bass Simon Keenlyside. That afternoon provided one of the most profoundly moving performances I've heard in a in a long time. The better part of a year later, listening to this recording in the grinding heat of a premature summer, I have a visceral memory of goosebumps that afternoon at Avery Fisher Hall. When Noseda brought the Requiem to its hushed close, stillness reigned for about half a minute, with no one making even the slightest stir.

A large part of that credit goes to Britten, particularly if you are inclined toward his steadfastly pacifist message. But in revisiting the work through this recording (made live in London two weeks after the New York concert), I still hear a riveting performance. The LSO musicians, joined by the London Symphony Chorus and the Choir of Eltham College, play with admirable color and clarity. Noseda holds tight to the piece's dramatic arc, its bleak mourning intercut with moments of overwhelming and even ghastly power, such as in the chaos of the "Dies Irae." Slovenian soprano Sabina Cvilak sings with lovely freshness, and Ian Bostridge and Simon Keenlyside are consummate storytellers. Their recounting of the Abraham/Isaac episode is just devastating. And kudos to the engineering team for clear and present sound. If you're searching for a contemporary avenue into a piece imbued with timeless meaning, one that carries particular poignancy during our own war-torn era, look no further.