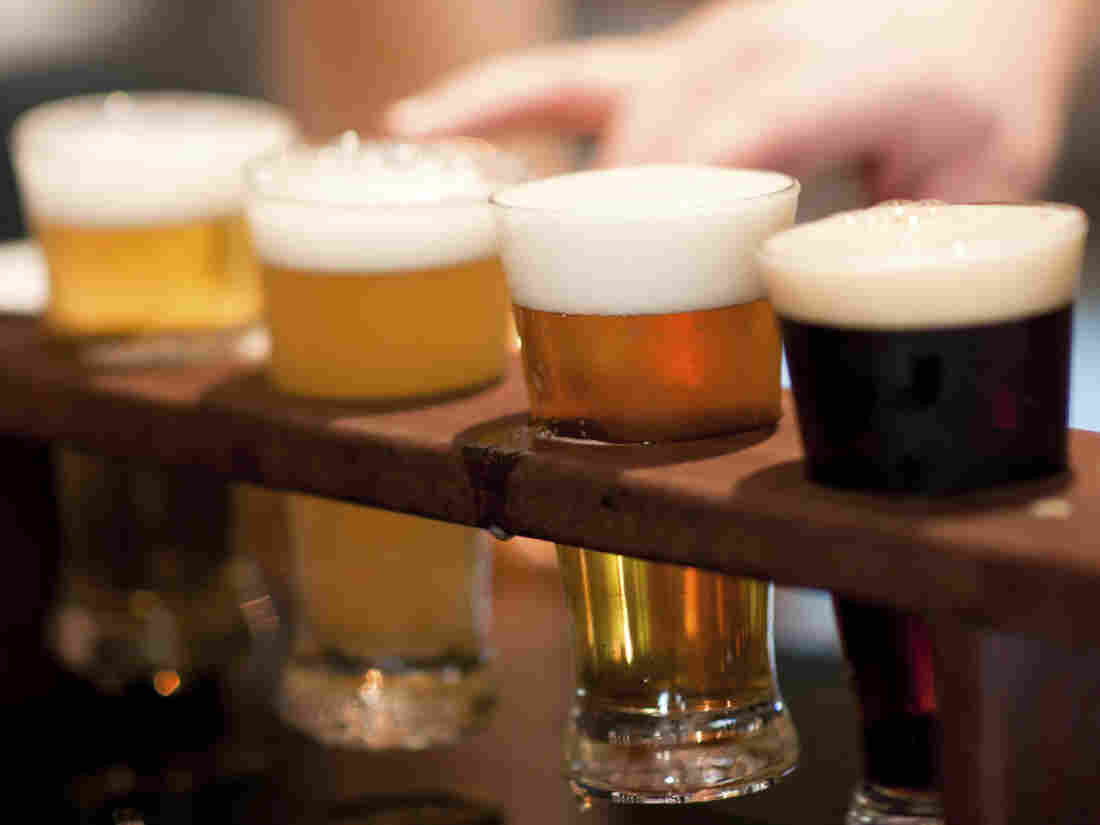 A flight of beers to accompany some musical flights of fancy. iStock hide caption 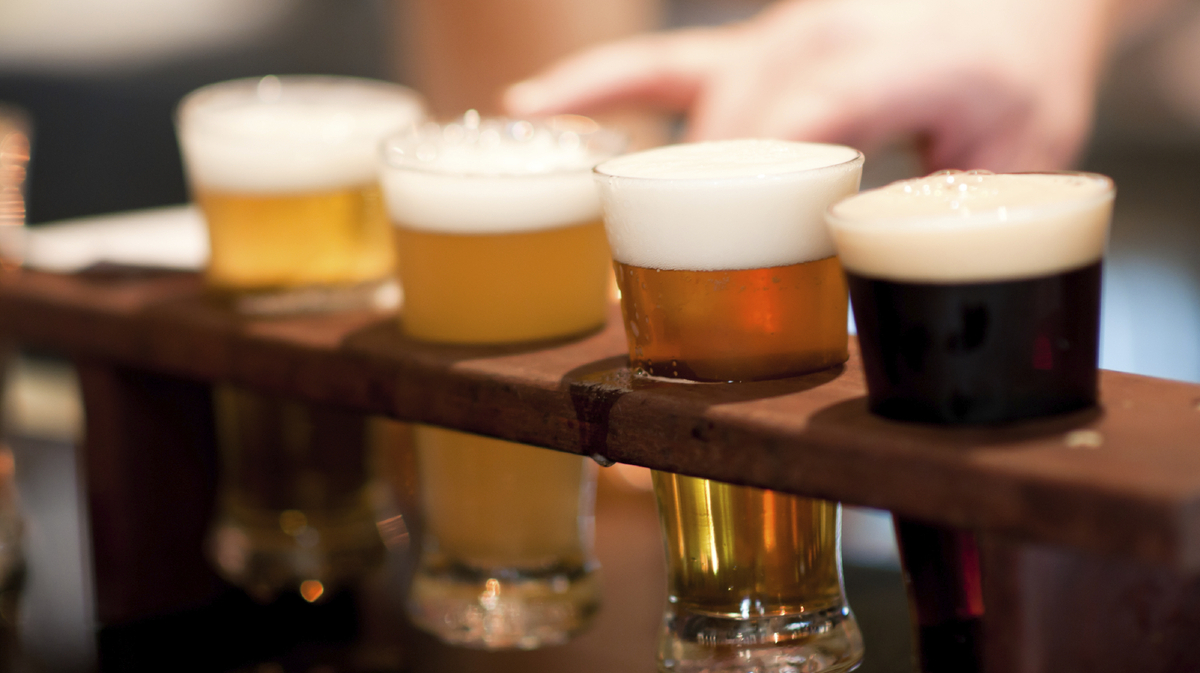 A flight of beers to accompany some musical flights of fancy.

Throughout history, beer has been the drink of the populace. Traditionally, wine was reserved for the upper classes, due at least in part to the limited area in which grapes would grow, the subtlety of the flavors, the sheer price of production. Barley, on the other hand, grows much more plentifully than grapes do, in a much broader climate. It can be made much more inexpensively and in much greater volume, so beer supplied a vast peasantry with something safe, sustaining — and delicious — to drink.

With the explosion of craft beer, the inclusion of ales and lagers in tasting menus throughout the country, and the development of the Cicerone program (like a sommelier certification for suds), the past few years have seen the elevation of beers to a status wines have long held on their own: as discussion-worthy matches to the greatest cuisines around the world.

As I paired a flight of wines with a menu of wonderful music a few months ago, I thought that we'd take the same tack with beer: pick a program of fabulous music and find the perfect accompanying brew. With bottles in hand and iPod on full blast, I set out to find suitable matches. (Tough job, I know.) 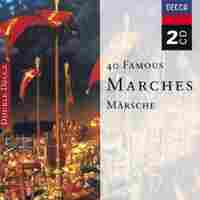 There is no piece of music that may be more attuned to waiting than Edward Elgar's Pomp and Circumstance March No. 1. First, it takes nearly two whole minutes to get to the part of the piece most of us know: that bit you've heard in a million graduation ceremonies. And while the melody accompanies whatever majestic progression we are present to witness, that section is generally repeated — ad infinitum— until however many thousands of solemn congratulants finish slowly shuffling past. Just the thought of all that waiting makes one thirst for an appropriate brew.

The key to enjoying a good Boddingtons is, fittingly, waiting. As the steady stream from the tap fills the glass, the head foams and froths, aligning itself as it gradually forces its way to the top. Once everything is finally in place, all lined up, all in order, after excruciating minutes, you can lift that glass slowly to your lips. And suddenly, you're transported to turn-of-the-last-century England. The foaming froth, thick and proper, clings valiantly to your robust mustache, your portly belly held in check by your fine tweed suit. A simple, clear flavor persists; it's sincerely enjoyable, an excellent reason to while away the time. And checking your pocket watch, you see that indeed, there is time for one more.

Mexican composer Silvestre Revueltas wrote Sensemaya in 1937 as a musical exploration of Nicolas Guillen's poem describing ritual sacrifice in Afro-Cuban religion. Repetitive chants find voice through a pounding, incessant rhythmic drive. The knife-blade balance of life and death, the fight between man and snake, the prayer to a god who can bring healing or death, all echo in the ominous sounds of Revueltas' most popular work. Full of dark and powerful chords, it is a bold and aggressive piece. The rhythmic intensity drives relentlessly throughout, leading an expansive brass and percussion section to a forcefully decisive conclusion.

Speaking of rituals: Once a year, on only one day a year, followers of the cult of Three Floyds gather around a collection of buildings in Munster, Ind. They pray that they will be able to enter the hallowed grounds and stand amongst other believers, waiting to be gifted with a mere four bottles of what is one of the most collected and sought-after beers in the world: the Dark Lord.

A Russian imperial stout, Dark Lord outmatches nearly every other beer on the market in sheer size and intensity. Brewed with Intelligentsia coffee and Mexican vanilla, it is the answer to the question, "How big and intense a beer can we make?" Thundering in somewhere around 15% alcohol, it is opaque and brooding, awash with flavors of dark, malty, sweetly spiced coffee and thick, unctuous molasses. 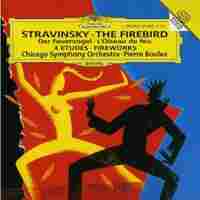 The well-known ballet Firebird by Igor Stravinsky is full of drama and enchantment, brimming with the spectacular. Since being commissioned for the Ballets Russes in 1910, it has been a perennial favorite, a story of love and magic that's filled with exciting music. Yet Stravinsky's music is not always easy for everyone to enjoy. His use of wild themes, complex harmonic patterns and aggressive, percussive writing has polarized audiences to love or hatred, but rarely anywhere in the middle.

In the ballet, King Katschei the Immortal and his court are forced to dance by the magical Firebird, as the creature assists Prince Ivan in freeing his beloved princess from the king's clutches. The dance is violent, thundering and dark. The rumble of timpani and the growl of French horns sets the stage for a dance both electric and exhilarating. The brass and woodwinds claw their way through the dense orchestration.

Schlenkerla produces one of the best-known beers made in the little-known Rauschbier style. Rauschbier, meaning "smoked beer," is brewed after exposing the malt to the fragrant smoke of burning beech logs. This imparts a deep, smoky, bacon-y flavor to the beer. It's a Scotch-drinker's beer, to be sure. Love it or hate it, you will not be in the silent middle with this beer, either.

The dark lager has a vibrant acidity, like those sporadic interruptions by the woodwinds and xylophone. However, the driving intensity of the beer is definitely its ever-present, brooding smokiness. And yet, for the amount of flavor in the glass, it is distinctly light on its feet: While it is bold in flavor, it clocks in at only 5.1% alcohol. Though it may cause you to schlenker ("walk not straight"), you can probably pass it off as dancing. 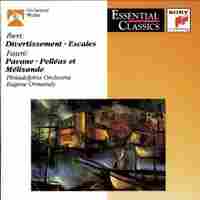 Escales (Ports of Call), suite for orchestra [No 2, Tunis-Nefta]

Jacques Ibert composed Escales ("Ports of Call") after serving in the French navy in World War I. Having traveled throughout the Mediterranean, he poured his recollections of the various cultures into this piece. Escales wanders from Rome to Tunisia, ending amidst the smell of oranges in Valencia, with the exotic sound of castanets and tambourines. The languorous woodwind writing meanders along its voyage until building to a vibrant, raucous conclusion of brass and cymbals.

India Pale Ale, or IPA as it is usually called, is inherently a beer for traveling, a style that was developed to survive the long ocean voyage from England to the British colonies (read: India). In order to help fortify the beers, extra hops were added in the brewing process. Hops, the cones of a climbing vine, are natural preservatives. They act as an antioxidant, and add acids that help ward off foul bacteria. Better yet, they taste great!

New Glarus Brewing Company, the cult-followed beer of New Glarus, Wis., has inspired many a fan to undertake the voyage to the Great North. Distributed only within the borders of the Dairy State, many a Chicagoan has hopped in the car to make the trek across borders to seek out this vaunted brewery's wares.

The IIPA, or Imperial India Pale Ale, is packed with hop flavor. Citrusy tang and spices waft from the glass, the faint bitters tingling on the back of the throat. Drinking it is as though walking through a spice market in an early morning, smelling and tasting amid the bustle of tradesmen selling all sorts of exotic things from their stalls. The citrus flavors linger on the tongue, just as Ibert's music flits through the woodwinds; the beer's high tones echo the oboe's floating solo. The texture of the beer is misleading: it feels light, and yet builds to growing intensity through the glass. This is a trek-worthy beer, inspiring enough even to brave the hordes of Packers fans protecting the exotic wilds of Wisconsin. 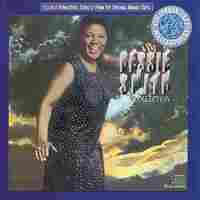 Gimme a Pigfoot (And a Bottle of Beer)

Bessie Smith: 'Gimme A Pigfoot (And A Bottle Of Beer)'

As much as I enjoy pairing beers with great cuisine (and music), it's important not to forget one of the true joys of beer. At the end of a hot, steamy summer day, there is nothing more refreshing than an ice-cold bottle of suds. When the city swelters and sweats, there is no more welcome sight than a dingy bar with an old sign hanging out front.

Beer, while it has risen high, is still the drink "of the people." Sometimes the best spread really is a cold beer, something delicious to eat and a raucous attitude. Bessie Smith put voice to the powerful emotions that drove the blues. Nothing speaks of the early American 20th century like the blues — and no one sings them the way Bessie did.

Founded in Milwaukee in 1844, Best Brewing tied blue ribbons around its famous beer. Eventually the company changed its name to Pabst Brewing, and today PBR is the drink of choice of the retro-cool. It is the hipsters' anti-hipster beer and the non-hipsters' choice for cheap. Clean, simple and straightforward, there is no decoration in a can of PBR. Its low-brow image is making it the choice of drinkers (and chefs and sommeliers) everywhere. It's cheap, refreshing and makes no bones about what it is.

Frankly, there may be nothing better on a hot summer night, after a busy service in the restaurant, than an ice-cold PBR. Not sure how I feel about the pig foot, though.

(And for those of a younger generation who perhaps have not yet discovered the joys of Bessie Smith, or even the retro-cool of PBR in an ice-cold can, might I then suggest a Miller Lite and Toby Keith's "Red Solo Cup." Proceed to party.)

Aaron Sherman is the sommelier at NoMI Kitchen at the Park Hyatt Chicago, a 2012 Wine Spectator restaurant award winner. As a percussionist, he has played with the Chicago Symphony Orchestra and Lyric Opera of Chicago.