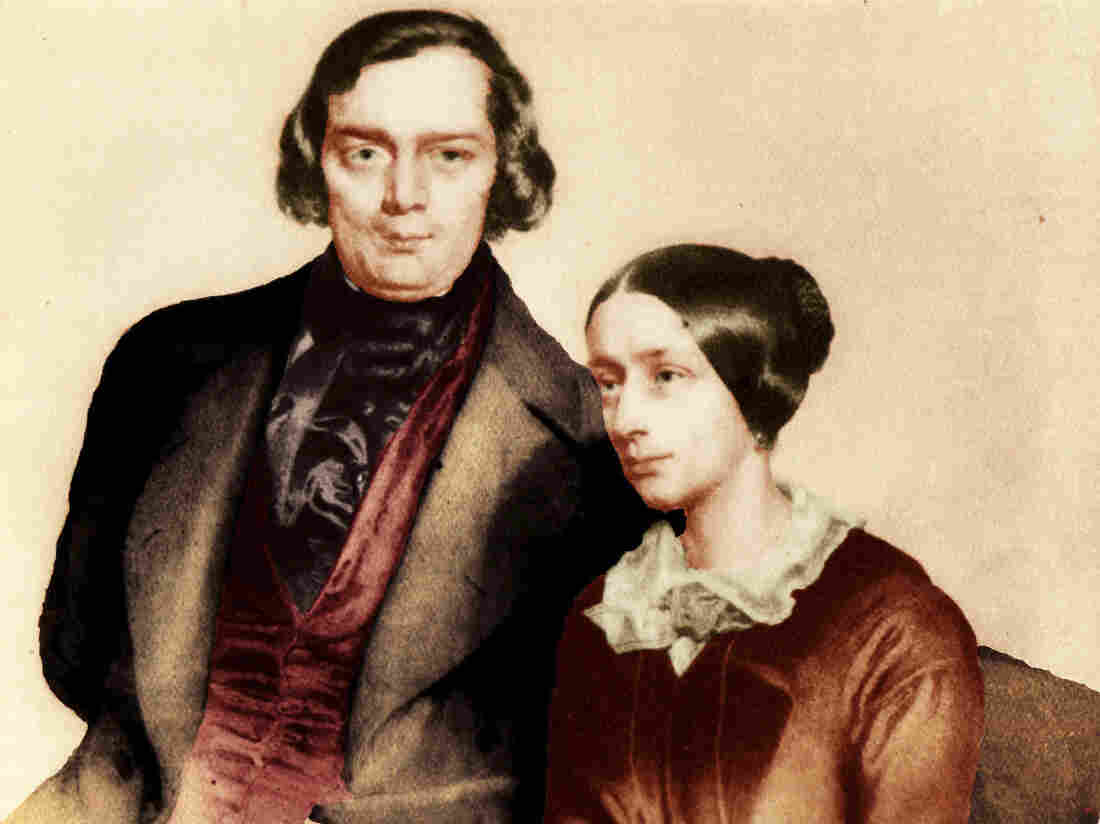 Communication was not a strong suit for Robert and Clara Schumann. But music surely was. Lebrecht Music/Corbis hide caption 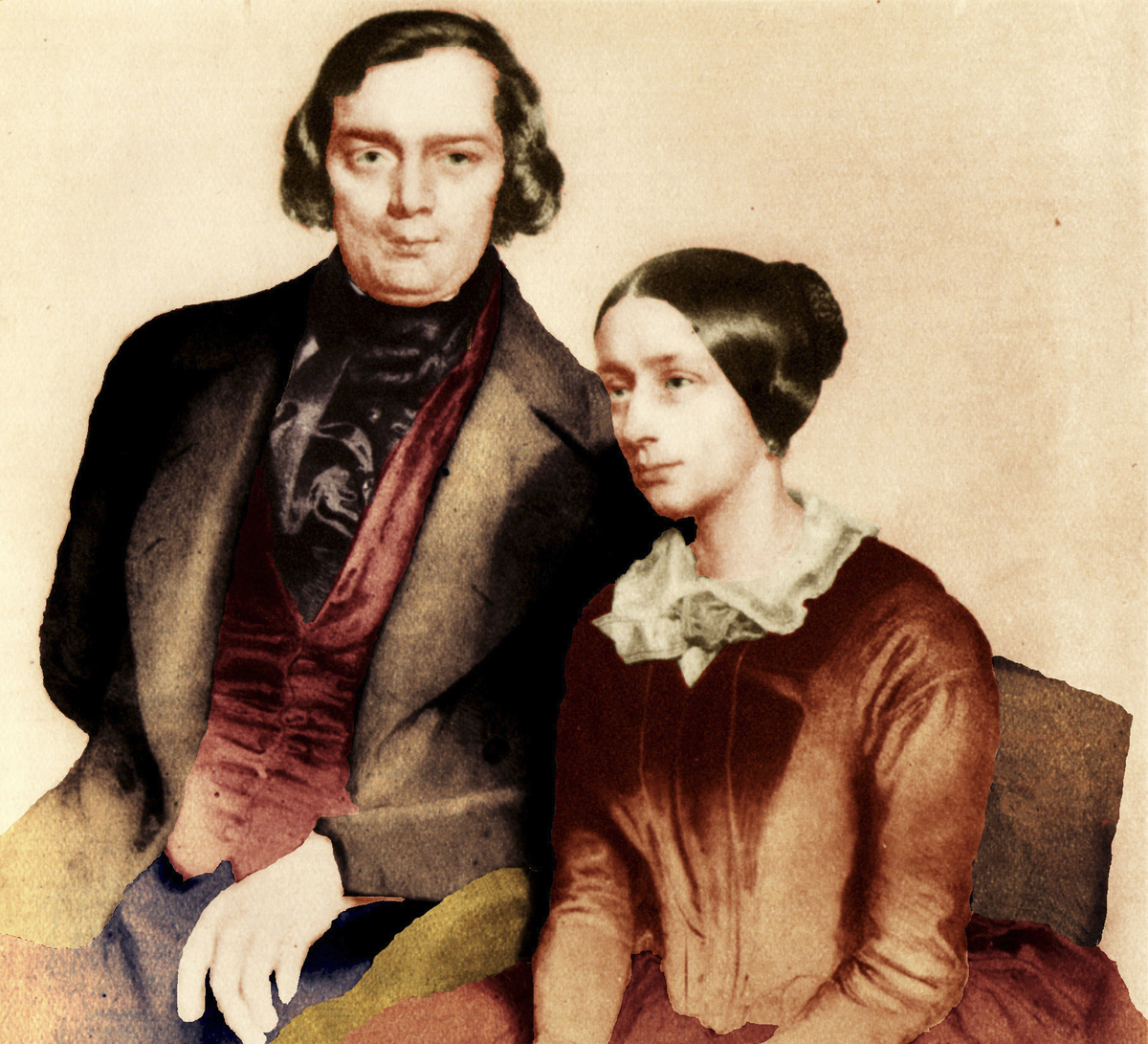 Communication was not a strong suit for Robert and Clara Schumann. But music surely was.

(Pianist Jonathan Biss decodes the unconventional relationship between Robert Schumann and his wife Clara in this second essay for our week dedicated to this composer. Click the audio link above to hear him play Schumann and discuss his work with Performance Today host Fred Child.)

In October 1841, Clara Schumann wrote in her diary:

I have had several unhappy days in which I really tormented my poor husband — I thought he didn't love me as much as he had during the first year [of our marriage]. I know very well that he has many things on his mind which vex him. I was very irritable and because of this gave myself many troubled hours.

As a diary entry, there's nothing particularly unusual about this — except perhaps the recitation of woe only one year into her marriage. But this is not actually Clara's diary, it was Clara and her husband Robert's diary — their marriage diary. And by all accounts, it was the primary way the Schumanns communicated with each other. Grievances, desires, fears — these were aired not in actual dialogue but in writing.

Incredibly odd as this may seem to an outside observer, it made a great deal of sense for the Schumanns, given their personalities and the nature of their relationship. Whenever they went on concert tours — Robert as composer and chaperone, never as performer — people they met reported a disconnect between the eloquence of the music and the extreme social awkwardness of the couple themselves. This was particularly acute with Robert. Clara may not have been any more comfortable with people, but like a good performer, she could fake it. Interpersonal relations were simply not a strong suit for either of them.

But most of all, the marriage diary worked for them because for the Schumanns, artistic expression was a form of religion — the diary served jointly as a lifeline for their marriage and a creative outlet. But while Schumann probably valued writing as much as any composer in history, music was high church. Which is to say, the most meaningful mode of communication for Robert and Clara was not the marriage diary: it was music.

The Message In The Music

The distinction between these two forms of communication is not so clear, though, because in Schumann's hands, music is the ultimate diary. Virtually everything Schumann published is, on one level or another, a love letter to Clara, and his music is filled with coded references and messages to her. The principal theme of the Piano Concerto is a thinly disguised spelling of her name. A movement from Carnaval bears her name — a portrait in sound. And the theme of one of her compositions, based on a falling fifth, so moved him that the interval came to represent her in his music. In literally dozens of works, the arrival of the downward fifth (not inherently a particularly expressive interval) brings with it the most tender, heartfelt moment of the piece.

The 20th century brought with it huge amounts of music whose subject is the composer's personal experience. Dmitri Shostakovich is a particularly obvious example, but hardly the only one. It also brought confessional poetry, confessional drama and, with the rise of television, confessional everything else. So it is very easy to lose sight of how radical Schumann was in this regard. He is the first composer to conceive of his music as an extension of his soul, as the medium through which his conflict with the world is expressed and, on a good day, worked through. No one, before or since, has written music so personal, emotionally specific, and unflinchingly honest.

One of the most striking cases of this is the vast, wild and generally astounding Kreisleriana. In this set of eight fantasies, time and again the falling fifth comes and brings with it a heightening of emotion. It is the sole moment of vehemence in the inward second piece, the hint of reality in the dreamscape fourth and the moment at which the seventh progresses from mere disaster to total catastrophe.

Not only is Kreisleriana a diary of sorts, it is itself inspired by words. The "Kreisler" in question is Kapellmeister Johannes Kreisler, an invention of Schumann's beloved E.T.A. Hoffmann. Kreisler, protagonist in three of Hoffmann's works, was a brilliant but unstable musician and it's not exactly difficult to understand why he resonated with Schumann. In Kater Murr (The Life and Opinions of the Tomcat Murr), the novel from which Kreisleriana seems to be drawn, Kreisler's memoirs alternate with the slightly confused ramblings of his cat. (This is 19th-century German literature, after all.) Thus each section of the book features radically different accounts of the same events.

Accordingly, while every movement of Kreisleriana has a central idea, the work covers enormous emotional territory and is virtually defined by its mood swings. Ultimately, only the recurrence of the fifth clarifies that whatever is taking place in the moment, its source is always the same — the complex mix of emotions Clara elicited from Schumann. His feeling for Clara is more than just the background of Kreisleriana — it is its subject.

Music was not, ultimately, enough to save Schumann. But when I play Kreisleriana, or much of his music, really, I sense that it was a lifeline for him. Music has been speech from the very beginning: It has always had grammar, intonation, and meaning. But with Schumann, it is really his only means of speech. For years, it allowed this sensitive, frustrated man to give voice to his feelings in a way that he would otherwise have been unable to.

And because his music is, magically, simultaneously, deeply personal and totally universal, he gives voice to us as well. To pour one's heart into music takes a certain kind of bravery, but if it did not in the process express something the rest of us could recognize, it would be of little interest. Schumann's music looks at the darker corners of the human experience and filters them through his unique, vibrant, phantasmagorical lens; that is his genius. And a great gift to the rest of us.