Accessibility links
Schumann's Culture Of Musical Nostalgia : Deceptive Cadence The pianist explores the possibility that Robert Schumann was the first composer to infuse a longing for the past music in his own music. 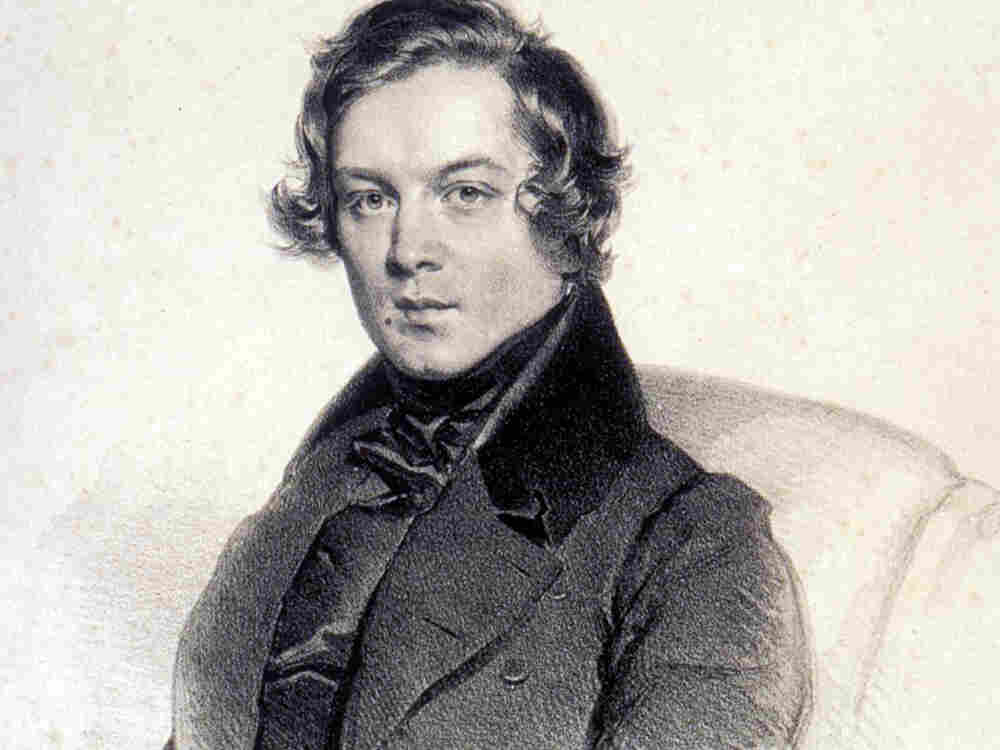 Robert Schumann may have been the first to infuse a yearning for music of the past in his own compositions. Joseph Kriehuber/Wikimedia Commons hide caption 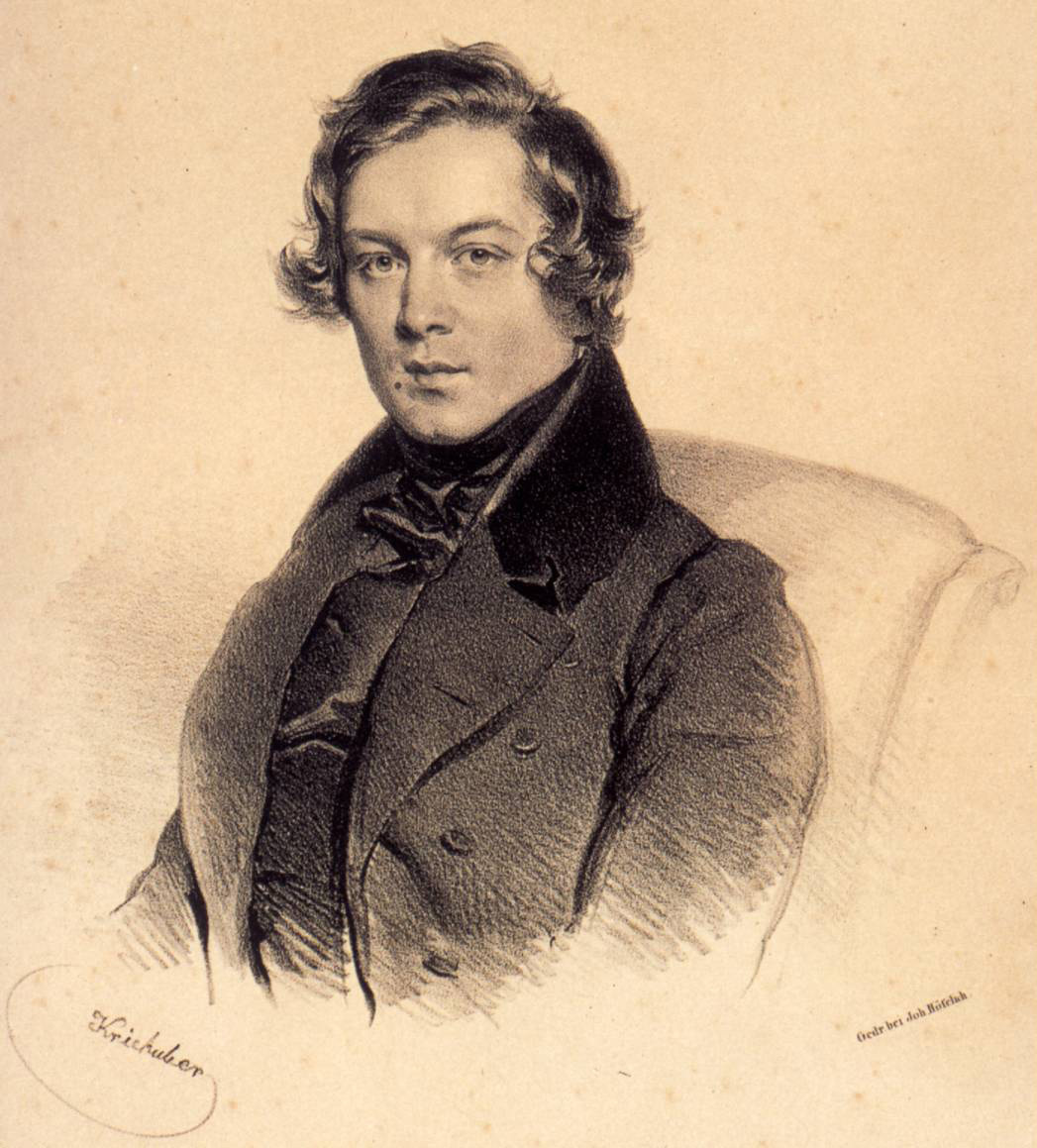 Robert Schumann may have been the first to infuse a yearning for music of the past in his own compositions.

(In this third and final part of a series, pianist Jonathan Biss explores the idea of musical longing in Robert Schumann's music. Click the audio link above to hear Biss play Schumann and discuss the composer with Performance Today host Fred Child.)

There's a charming scene in Woody Allen's Midnight in Paris where Owen Wilson, completely smitten with his fantasy of Paris in the 1920s, discovers that Marion Cotillard, his dream woman (literally) from the era, doesn't share his affection for it: She longs for the Belle Epoque. So together they go back to the 1890s — it is a fantasy, after all — and there are Toulouse-Lautrec and Gauguin, wishing they'd had the fortune to have lived in the Renaissance.

I loved the conceit, but found myself wondering just how far back it went — did Piero della Francesca pine for the Dark Ages? And then I thought of music: Is yearning for the past a critical element in music, and if so, has it always been present? The more I thought about it, the clearer it became to me: Robert Schumann is the inventor of musical nostalgia. Moreover, he is the creator of a musical nostalgia culture, alive and well two centuries after his birth.

It takes a bit of a mental leap to realize this quality needed "inventing." In the 20th century, nostalgia became such a critical element of music and the musical world. If I look at the composers of the last 100 or so years I love most, disparate as they may be, they share an uncanny capacity to communicate longing for the past. It is there, implicit, in the downward, "sighing" figures that permeate the music of Schoenberg, Webern, and Berg; it is more explicit in Janácek, who gave his pieces titles like "Words Fail!" and "Unutterable Anguish," and whose In the Mists is a lament against the cold, unfeeling musical culture he inhabited. And it is the very essence of the music of György Kurtág, who solicited the assistance of a therapist to convince him that writing music in the late 20th century was not pointless. Ultimately, his solution is to write intensely expressive miniatures — frequently in tribute to the past masters he reveres. One of the most significant and moving of these tributes, not coincidentally, is the Hommage à Robert Schumann.

This ache for the past becomes absolutely critical in the 20th century, but it does not begin there: Gustav Mahler, Hugo Wolf, and Johannes Brahms didn't share much, but they were all haunted by the specter of Beethoven. Each in his own way was preoccupied with the problem of composing in a style and harmonic language that was already halfway to being dismantled. For Brahms, the solution was to meticulously, even fanatically, study the old style. For Wolf it was to try to ignore it completely, and for Mahler, it was a more complex mix of adulation and rejection.

But go back far enough, and this backward glance — this musical rückblick — goes away. In the latter half of the 18th century and the beginning of the 19th, musical culture was rooted in the present. Beginning with Haydn, the era saw a series of masters each of whom wanted to build on what their predecessors had accomplished. Beethoven may have occasionally protested that no one would ever surpass this or that achievement of Mozart, but time and again he tried, using all the same genres in which Mozart had excelled. And while at that level, it is impossible to say that he succeeded, he certainly didn't fail either. And Schubert was equally fearless in seeing the piano sonata and string quartet not as forms whose summits had been reached, but as vehicles for the expression of his own unique musical personality — just as Mozart and Beethoven did, he put new wine in old bottles.

Of course these titans could and did express nostalgia. Mozart may have done it better in the aria "Porgi Amor" than anyone before or since, though Schubert's lieder provide stiff competition. But it was the nostalgia that is a part of life's experience that interested them — the wistfulness that comes with the memory of a person or event — not the nostalgia for a previous musical era, style, or form.

And this is where Schumann represents such a sea change. He was plenty concerned for the future of music — he even created a fictional army, the "Davidsbündler" (League of David) to advance its cause in the face of a reactionary society. But he was also the man who, in 1837, wrote a piece about the idea of a musical "museum," and the question of who belonged in it. It could be that Schumann was the first composer to think of an artistic canon that preceded him.

In fact, he not only thought of such a canon, he paid obeisance to it: Schumann wanted to build monuments — both literal and figurative — to Beethoven. In the 1830s, Schumann was central to the fund-raising effort towards the construction of such a monument in Bonn, discussing the idea with his colleagues and writing an even more fanciful than usual essay on the topic. (Written in the voices of four alter egos — he typically restricted himself to two — the piece is Schumann at his most enjoyably wacky.)

But the real Beethoven monument Schumann was responsible for was musical. With his C Major Fantasy — one of his largest canvases and most staggering achievements — he created a work of art which is part tribute, part loving portrait, but most of all a deep lament: a lament for Beethoven, whom Schumann so revered, and for himself, given his conviction that this music he loved so much was the product of a world that no longer existed.

The roiling first movement lives in a state of permanent irresolution until, a minute from its conclusion, a direct quotation from Beethoven's song cycle An die ferne Geliebte ("To the Distant Beloved") appears. (In the original song, the words are: "Take these songs, then, that I sang to you, beloved.") Schumann has assiduously avoided any sort of harmonic point of rest until now — and there have already been 12 minutes of music! — making it seem that only this musical voice from the past can quiet the turbulence. This quotation has in fact been hinted at throughout the movement. There are at least five references to it: the first almost entirely amorphous, each subsequent one clarifying it, bit by bit — but only when we hear it properly at the end do we understand that Schumann has been groping for it all along.

In other words, nostalgia is not only an important feature of the Fantasy, it is its structure. The piece is given both meaning and shape by Schumann's conviction that only the past — in the guise of a very beautiful but honestly not extraordinary Beethoven song — can save him.

Today, it is simply understood that classical musicians have a reverential attitude towards the past — it elicits an eye-roll here and there, but generally gets no reaction at all. But for Schumann, the idea that he was working in an art form whose pinnacle might have already been reached was a novel one. It is also heartbreaking, when considered in the context of all of his other insecurities: a failed pianist, lousy businessman and misfit, Schumann counted on composition to give his life meaning.

And yet, through putting into sound his yearning for the music of a previous generation — not to mention his tireless advocacy for the music of his own — Schumann became one of the most influential and essential figures in the history of the art form. How I wish he could have known!