The vocal ensemble Roomful of Teeth, founded and directed by Brad Wells (left). Stephen Spinelli/Courtesy of the artists hide caption

The vocal ensemble Roomful of Teeth, founded and directed by Brad Wells (left).

Stephen Spinelli/Courtesy of the artists

Roomful of Teeth is an exciting young vocal octet founded just three years ago and directed by Brad Wells. And if the group's name is a little, um, in your face, that's entirely intentional. Their eponymous debut album on New Amsterdam Records (funded via Kickstarter) is a thoroughly 21st-century re-imagining of a capella vocal music — experimental, multi-textured and more than ready to blur the lines between pop and art music.

Their singing is fiercely beautiful and bravely, utterly exposed. There's no electronic wash to hide imperfections, no other instruments add layers of sound. It's just these eight voices gleefully filling up a huge amount of space, and drawing upon a whole world's worth of non-traditional techniques. On the singers' website, you can check out the experts they call upon to explore non-traditional and non-Western singing techniques, from an American master of Tuvan throat-singing named Sean Quirk to Korean traditional vocalist Eun Su Kim.

For this project, Roomful corralled a number of exciting composers to write for them — not just a number of New Amsterdam stalwarts (including label co-directors William Brittelle, Judd Greenstein and Sarah Kirkland Snider), but most famously the polymorphously talented Merrill Garbus of tUnE-yArDs, whose "Quizassa" is one of this album's standouts and highlights the band's taste for esoteric vocal techniques. Garbus' song bears a strong resemblance to Inuit experimental vocalist Tanya Tagaq's work (now how's that for obscure?), with a few dollops of doo-wop thrown in for good measure, and somehow it all works out beautifully. 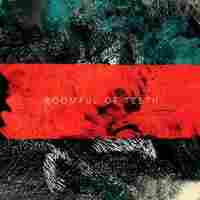 Exoticism, though, isn't the main draw here. Check out this record instead for the group's sheer virtuosity and total joy in the sounds they produce, like the supernuminous lines floating over churning breaths in "Courante," one of singer Caroline Shaw's Baroque-structured compositions that weave through the album like glittering threads, or Judd Greenstein's open-voweled and glowing "A E I O U," or the neo-yodeling (yes, really) of Rinde Eckert's "Cesca's View." It's a tremendously exciting debut — and I can't wait to hear more.