Accessibility links
Elliott Carter, Giant Of American Music, Dies At 103 : Deceptive Cadence The composer, who was born in 1908 and won two Pulitzer Prizes for music that could be challenging and adventurously modern, died in New York. 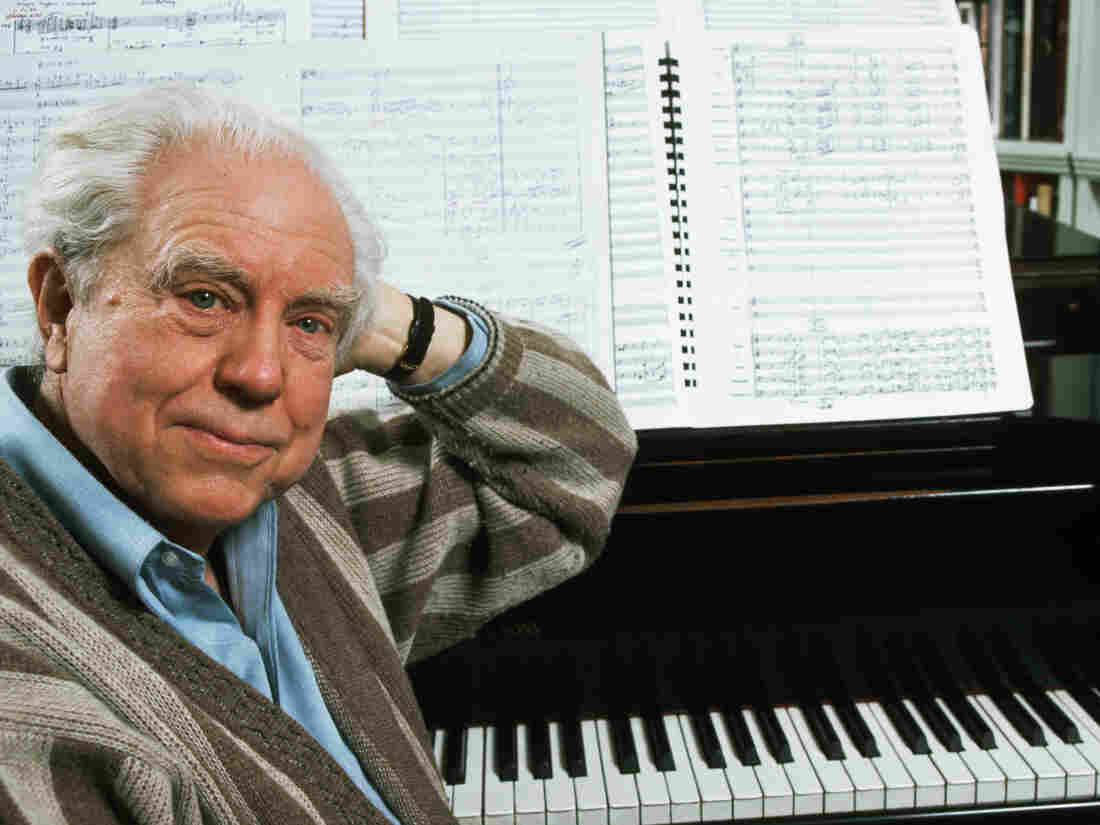 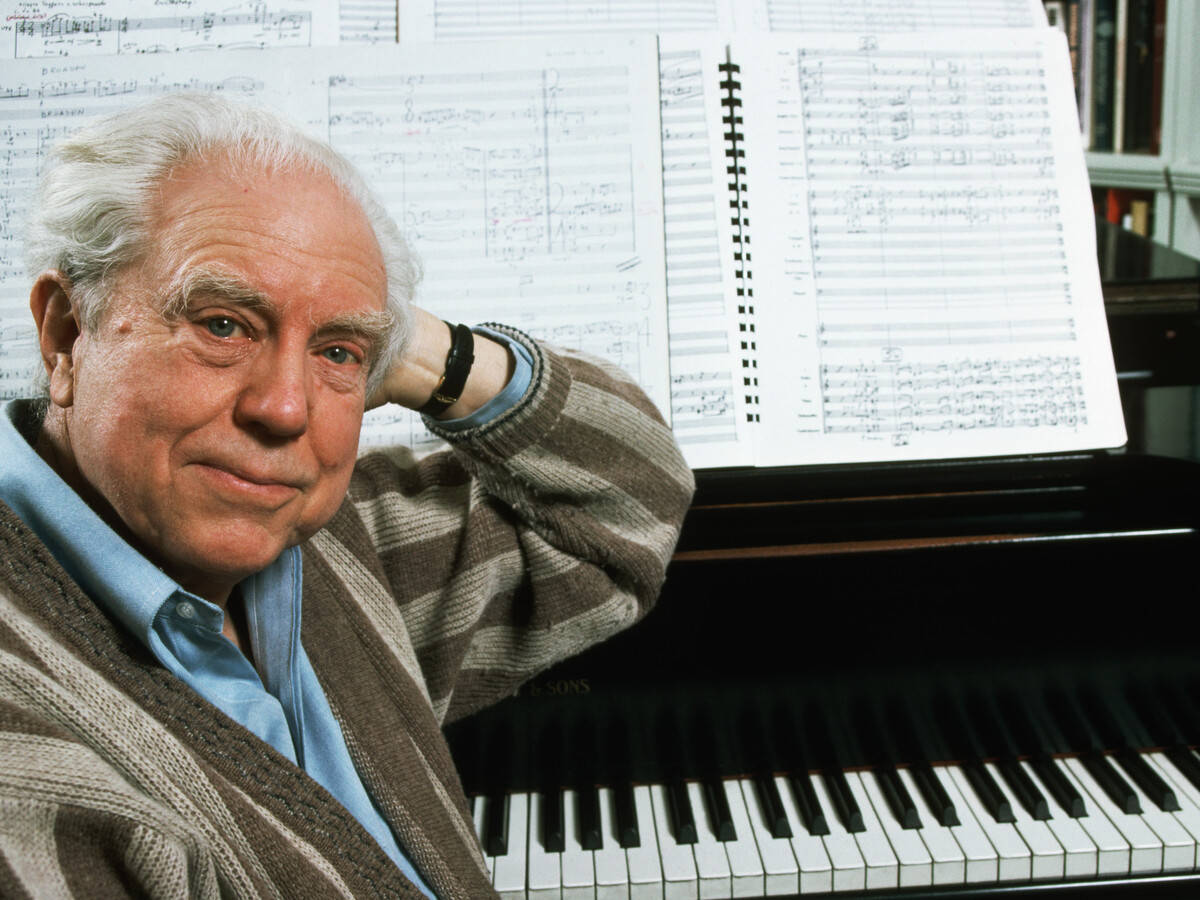 Composer Elliott Carter at the piano in 1989.

Tom Cole's appreciation of Elliott Carter's life, which includes interviews with Carter and musicians Charles Rosen and Ursula Oppens, airs Tuesday on All Things Considered. To hear the segment, click the audio link.

The dean of American modernist composers, Elliott Carter, died in New York City Monday. He was just about a month shy of his 104th birthday.

Carter's music, while often thorny and complex, was championed by many of the world's great orchestras and conductors. He also wrote in a wide variety of genres including songs, opera and chamber music, which earned him Pulitzer Prizes for his string quartets in 1960 and 1973.

Carter's Cello Sonata, from 1948, was a bold breakthrough, written for cellist Bernard Greenhouse, who later co-founded the Beaux Arts Trio.

"The Cello Sonata was extremely modern at that time," Carter told NPR's Tom Cole in a 2008 interview, the year he celebrated his 100th birthday. "I could not get it published. And Bernard Greenhouse and his pianist played the first performance at Town Hall, and they were covered with sweat. It was so upsetting and so disturbing — we had hardly anybody in the audience. If they heard what I write now, they would run out of the hall screaming, I suppose."

The composer's longevity was remarkable, but what amazes more is Carter's continued productivity. Carter was still composing music nearly up until his death. By one account, he published more than a dozen works since turning 100, and 40 more works while in his nineties.

In fact, his Dialogues II was just premiered in Milan not even two weeks ago on Oct. 25, with Daniel Barenboim as pianist and Gustavo Dudamel conducting the Orchestra of La Scala; another performance with Barenboim is scheduled for Nov. 15, this time with the Berlin Staatskapelle and Zubin Mehta conducting.

In marking Carter's centennial, Cole observed the incredible span of history the New York City composer witnessed. In the year he was born, Henry Ford introduced the Model T. Carter remembered seeing English warships in the Hudson River when he moved to Riverside Drive as a child, near the end of World War I.

Born into a prosperous family of lace importers, Carter spent parts of his childhood in Europe, speaking French before he mastered English. His parents weren't musical, but they provided him piano lessons in his youth. He began cultivating an interest in modern music after enrolling in New York's Horace Mann School in 1922. Two years later, Carter was introduced to the maverick American composer Charles Ives, who took him to concerts and wrote a letter in support of Carter's admission to Harvard.

In the early 1930s, Carter, like many American composers, made the pilgrimage to Paris to study with legendary pedagogue Nadia Boulanger. Never pleased with the music he wrote during his three-year period with her, he instead insisted that his immersion into performing early vocal music and studying Bach were his chief influences.

After his return to the U.S., Carter stationed himself in New York City but traveled to accept teaching positions at St. John's College in Annapolis, Md., the Peabody Conservatory, and later Yale, MIT and Juilliard. Carter and his contemporary Milton Babbitt became the high priests of midcentury atonal academia, when traditional harmonies and melodies were shunned in conservatories nationwide.

Carter found inspiration in surprising places. In one of his last filmed interviews, he tells cellist Alisa Weilerstein how he came up with the percussive sounds that interrupt the more meditative passages in his Cello Concerto (a recording of which Weilerstein has just released). It all started, he explained, with a visit to the Kyoto Moss Gardens. Weilerstein's recording of this concerto has just been released.

"The moss gardens had many streams of water to keep the moss alive," he explained. "And it had little bamboo tubes ... and when they were filled they would turn over and there would be a loud snap. And I put that into the concerto." Carter's sudden rhythmic swerves and the often surprising sounds he demanded from musicians delighted his fans and further alienated his detractors.

Early in his career Carter declared, "I am a radical, having a nature that leads me to perpetual revolt." And if, especially in his later years, his avuncular personality seemed far removed from that avant-garde battle cry, Carter's music, always keenly constructed, never lost its bite.

In comments he made when Carter was awarded a gold medal by the American Academy of Arts and Letters in 1971, Aaron Copland said of Carter: "He writes a music that is unlike that of any other composer on the contemporary scene. It reflects a rare combination of heart and brain: the man of feeling and the man of intellect. ... Other composers may create a polyphony of musical lines, but Carter creates a polyphony of musical thoughts."