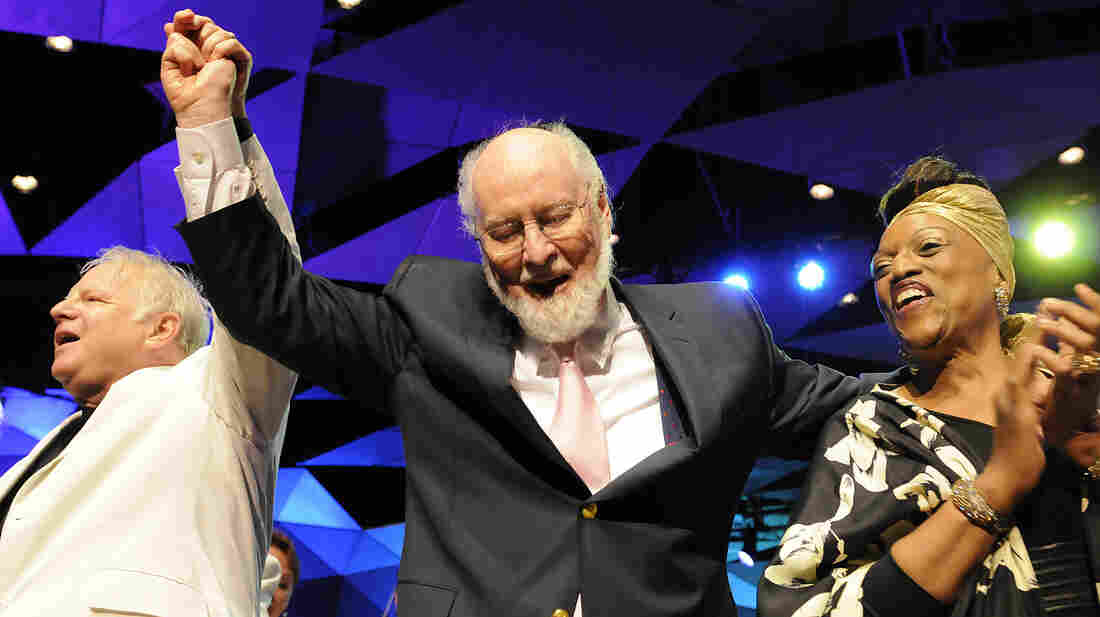 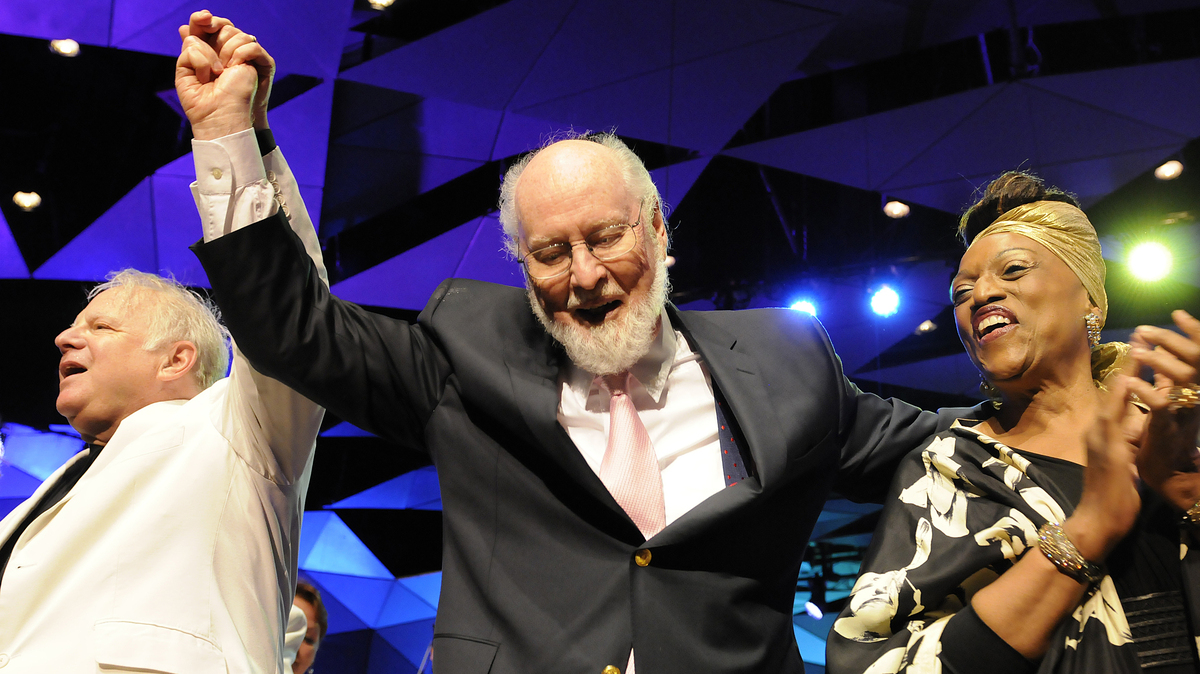 Flanked by composer Leonard Slatkin and soprano Jessye Norman, John Williams takes a bow during his 80th-birthday celebration at Tanglewood in August.

For more than 50 years, John Williams' music has taken us to galaxies far, far away through adventures here on earth, made us feel giddy joy and occasionally scared us to death.

He might be the most recognized contemporary composer in the world, but Williams says writing music wasn't what he first set out to do. He wanted to be a concert pianist and studied at Juilliard with renowned teacher Rosina Lhevinne.

"I played pretty well," Williams says. "I did hear players like John Browning and Van Cliburn around the place, who were also students of Rosina's, and I thought to myself, 'If that's the competition, I think I'd better be a composer!' "

Williams moved to Los Angeles, where he became a popular session musician, playing piano on movie and television soundtracks. He began getting jobs arranging music and then composing it. He worked at Universal Studios, writing TV scores.

"We had 12 shows a week at Universal that had to be recorded, which meant there were 12 three-hour sessions with an orchestra of some kind on the stage every week," Williams says. "So I filled one or two of those as a composer and conducted my own work also for seven years. So that was, I suppose, a graduate program in, if nothing else, how to get things done."

Williams says he learned much of his craft on soundstages from his colleagues.

"The instrumentalists at that time, as now, were outstanding world-class players," he says. "My advantage was that I'd been playing with them for three or four or five years, as a colleague in the orchestra. I would go over to a horn player and say, 'Have I got this too high?' or 'Is this trill a little awkward? Would you rather play it here or there?' Just from one friend to another, without any particular professional pressure. And they'd all say, 'No, put it here, put it there, do this.' "

On Meeting Steven Spielberg For The First Time

On Working With Steven Spielberg

On Composing For Star Wars

Williams wrote his first film score in 1960 and hasn't looked back. Whether he's writing for Steven Spielberg or George Lucas or Oliver Stone, Williams says his process has always been the same: He writes music the old-fashioned way, with pencil and paper, and doesn't begin composing until he's actually seen a rough cut of the film.

"I, over the years, have always felt more comfortable if I could go into a projection room and look at a film and not really know what to expect," Williams says. "If you read the script first, you form all kinds of preconceptions about how things look, what the location's like, what the actors are like. And then you may look at what the director's chosen — it doesn't comport with your conceptions at all. On the other hand, if I have the luxury of going into the dark projection room and being surprised when the audience is surprised and being bored when they're bored, I think that gives me a sense of what my job is: where I can press the accelerator button if I need to, or support an emotion or don't."

Lukas Kendall, founder and editor of Film Score Monthly, praises Williams' musicianship and says the composer should be known for more than his classic film scores for Jaws, Star Wars and other films.

"He has a breadth and depth of talent and career that really started before there were The Beatles; [today he is] essentially the dean of American composers," Kendall says. "His themes sound inevitable. They sound like they fell out of his sleeves; they sound like they've always existed. And it's extraordinary how you get just two notes for Jaws or five notes for Close Encounters and have them feel like they've always existed."

Steven Spielberg paid tribute to John Williams at Tanglewood this summer: "I am probably the only person who can boast that I have collaborated with John Williams for exactly half of his life," Spielberg said in his tribute. "This year marks our 40th year of working together, and I have to say, without question, John Williams has been the single most significant contributor to my success as a filmmaker."

In fact, Williams spent his 80th birthday working on the score for Spielberg's latest. Williams says it takes two to three months on average to compose a film score, going back and forth from his studio to his screening room to make sure everything syncs up properly.

"These days, I probably will get as much as a minute done or a minute and a half done in a day," he says. "It's a good day."

At 80, Williams is having a lot of good days. His energy seems boundless: He's laureate director of the Boston Pops, he's composing new classical work, and his score is filling theaters screening Spielberg's latest, Lincoln.

"I'm happy to be busy," Williams says. "I'm happy to have a wonderful family. And I think also, especially for practicing musicians, age is not so much of a concern because a lifetime is just simply not long enough for the study of music anyway. You're never anywhere near finished. So the idea of retiring or putting it aside is unthinkable. There's too much to learn."