Accessibility links
The Peony Pavilion: A Vivid Dream In A Garden : Deceptive Cadence Peony Pavilion is one of China's most famous operas, but uncut performances of this romantic 16th century work can take more than 22 hours. An adapted version of the dream-like opera will take place at the Metropolitan Museum. 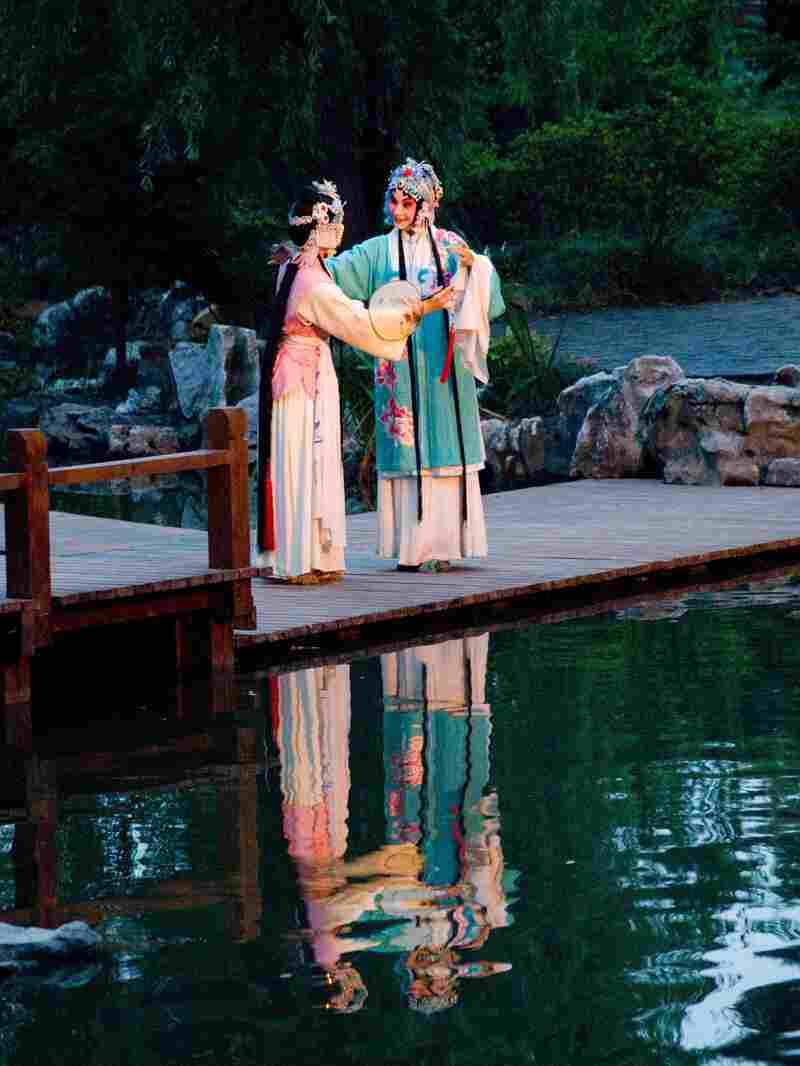 A garden serves as the stage in the opera. Zhang Yi hide caption 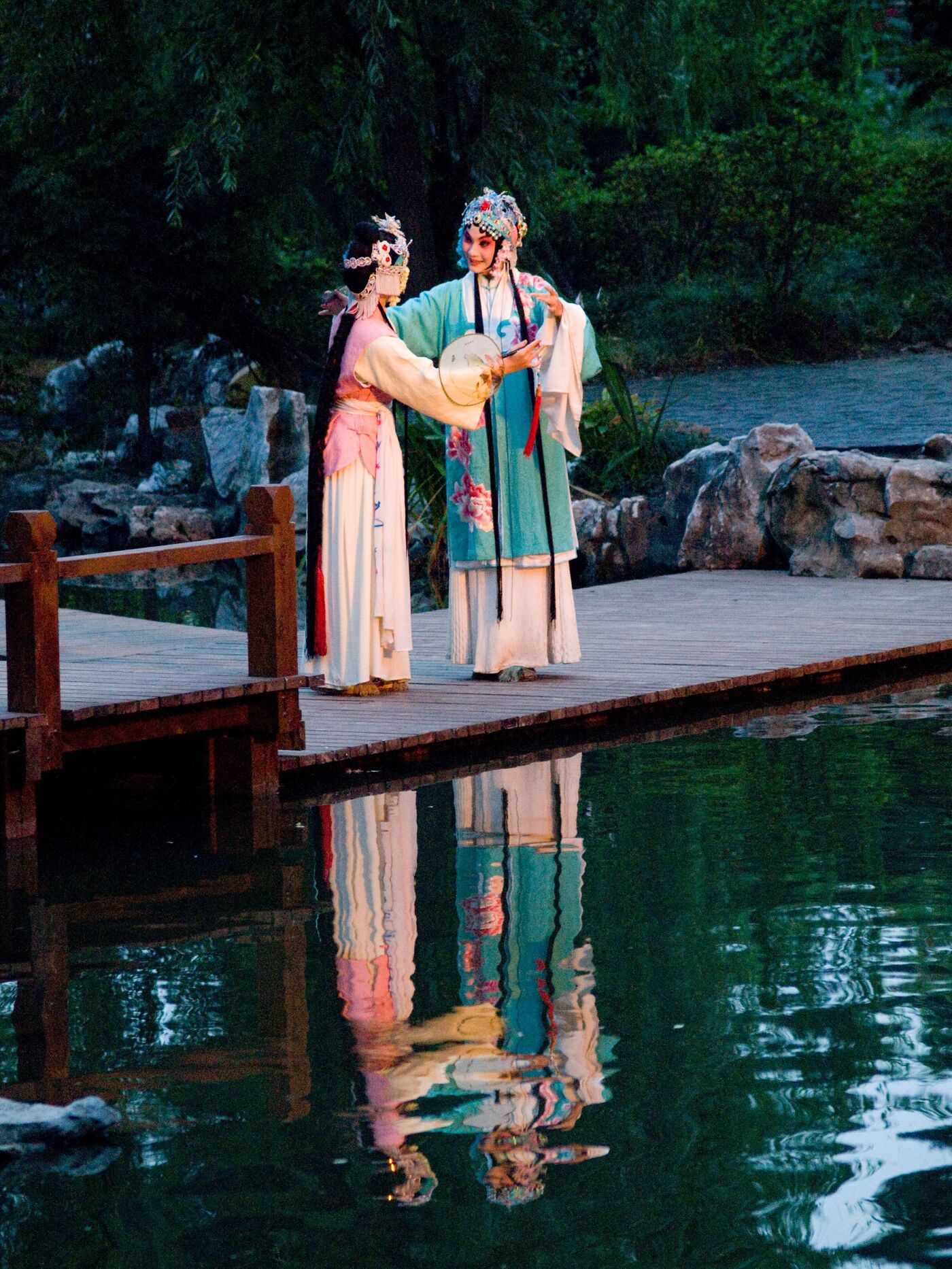 A garden serves as the stage in the opera.

The Peony Pavilion is one of China's most famous operas, but uncut performances of this romantic 16th century work can take more than 22 hours. Chinese composer Tan Dun, who's best known for his Academy Award-winning score for the film Crouching Tiger, Hidden Dragon, has adapted the work into a compact 75 minutes. His version will be performed in the Astor Court — a replica of a Chinese garden — in New York's Metropolitan Museum, beginning tonight.

When The Peony Pavilion was written in 1598, there were no theaters or opera houses in China. So this drama, which takes place in a garden, was actually staged in one, says Tan: "The garden became their live stage, actually, to present the writing, poetry, music and opera."

A few years ago, Tan found himself having tea in a garden outside of Shanghai, listening to the birds and insects — and he had an epiphany.

"And I suddenly realized: maybe we should take this interesting garden opera and come back to today," he says. "I said, 'I want to do a garden opera in this garden.' "

That production played to sold-out crowds every weekend in the garden for two years. Asian art curator Maxwell Hearn saw it there and convinced Tan to bring The Peony Pavilion to New York to stage it in the Metropolitan Museum's indoor Chinese garden. Hearn says Tan has taken this masterpiece and distilled it to its essence.

The Peony Pavilion is a love story that transcends time and space, Hearn says. It contains both dreams and supernatural elements. The heroine, Du Liniang, falls asleep in her family garden and has a vivid dream of falling in love with a handsome young scholar, Liu Mengmei.

"When she wakes up, she is possessed by this dream's imagery," says Hearn. "She pines away after her dream lover until she dies."

After she dies, her dream lover stops in the garden while he's traveling to take his civil service exam. He sees the heroine's portrait and falls in love with it.

"And her ghost visits him," Hearn says. "They, again, have a wonderful romantic encounter and then she persuades him that she is actually buried in the garden and that if he will only disinter her, she can return to life. He digs up her corpse and it's miraculously preserved; she comes back to life." 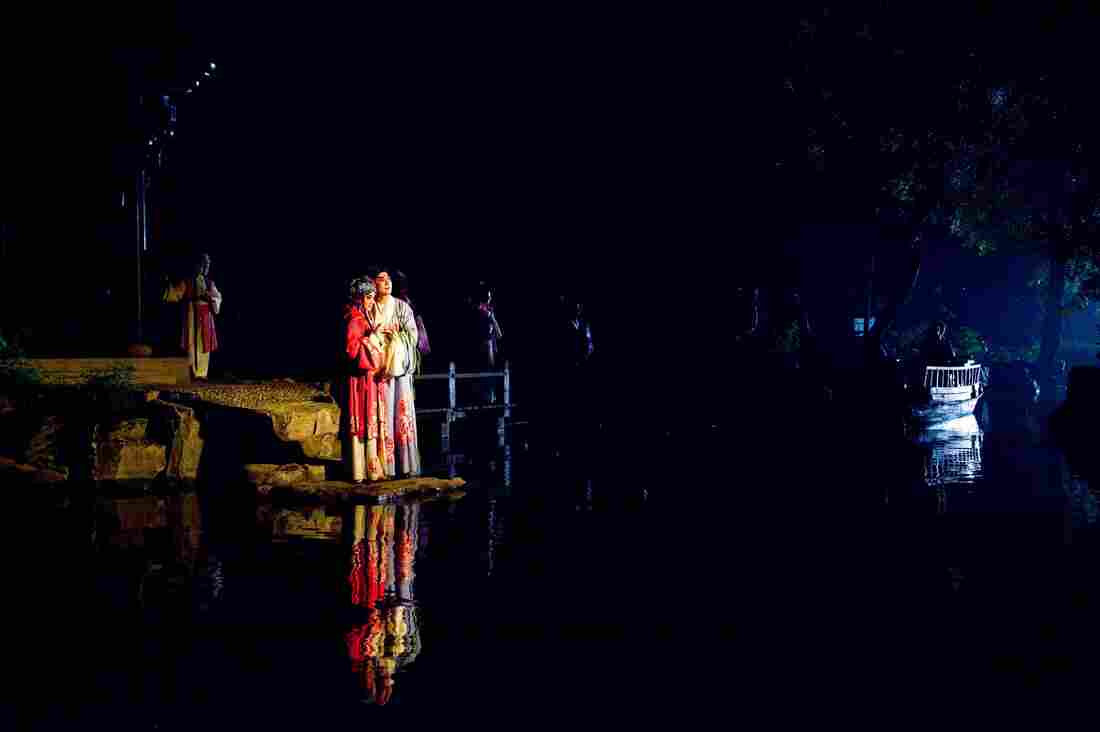 Dun has written both new music and adapted the original score, which is being performed by a small ensemble of period instruments — bamboo flutes, a Chinese lute and a percussion ensemble. And, in centuries-old kunqu style, both men and women sing in high falsetto voices. Tan says the style suits the ghostly, transcendent love story.

For the presentation at the Metropolitan Museum, Tan has brought the outdoor sounds of the garden indoors. He and his colleagues have recorded hundreds of hours of audio and have created a sound installation for the audience, so they can hear the wind and the water and the insects.

"And we also have Chinese birds: Shanghai birds, Beijing birds, all kinds," says Tan. "Place it in sort of a surrounding sound system, and from this window and that corner, you hear the birds around."

Hearn, who has put together an eight-room exhibit on Chinese gardens that surrounds the Astor Court, says the live audience for The Peony Pavilion will be limited.

"The one challenge we have is that the garden is very small and the fire code prevents us from having more than 50 individuals in the garden as an audience, because of the number of people who are in the performance itself," he says.

But audiences around the world will be able to experience The Peony Pavilion's ancient, romantic charms live this evening in a streaming video on the Metropolitan Museum's website and on demand starting tomorrow.