Accessibility links
Benedict And Beethoven: The Outgoing Pope's Musical Life : Deceptive Cadence With a reputation for conservative views, the pontiff's musical tastes run, not surprisingly, straight down the center of the meat and potatoes repertoire. 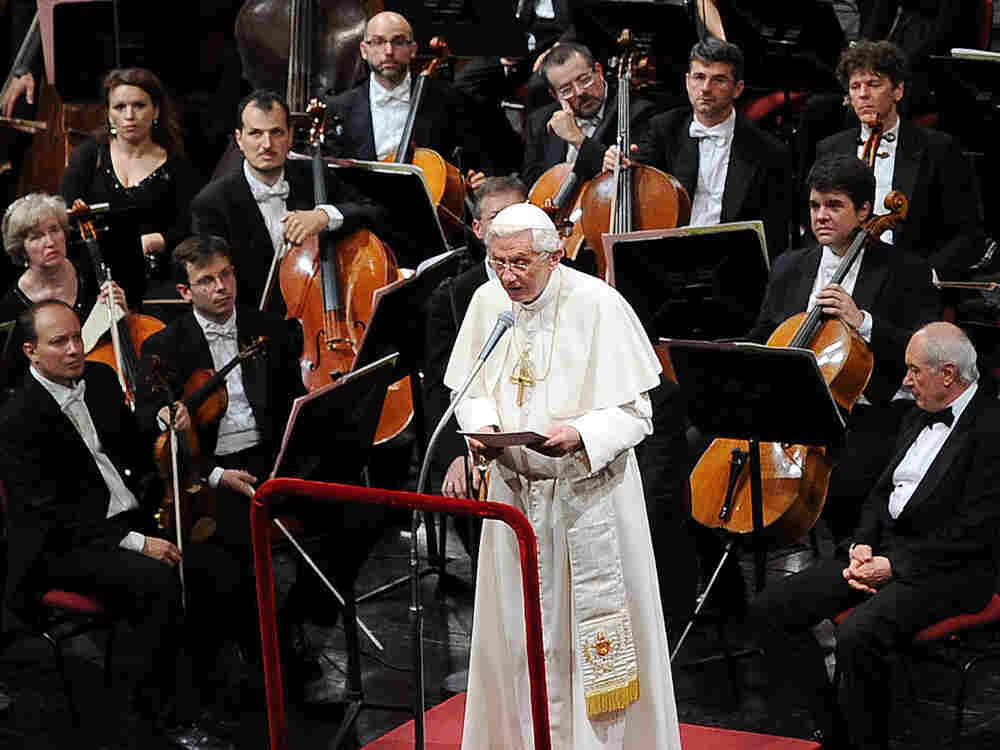 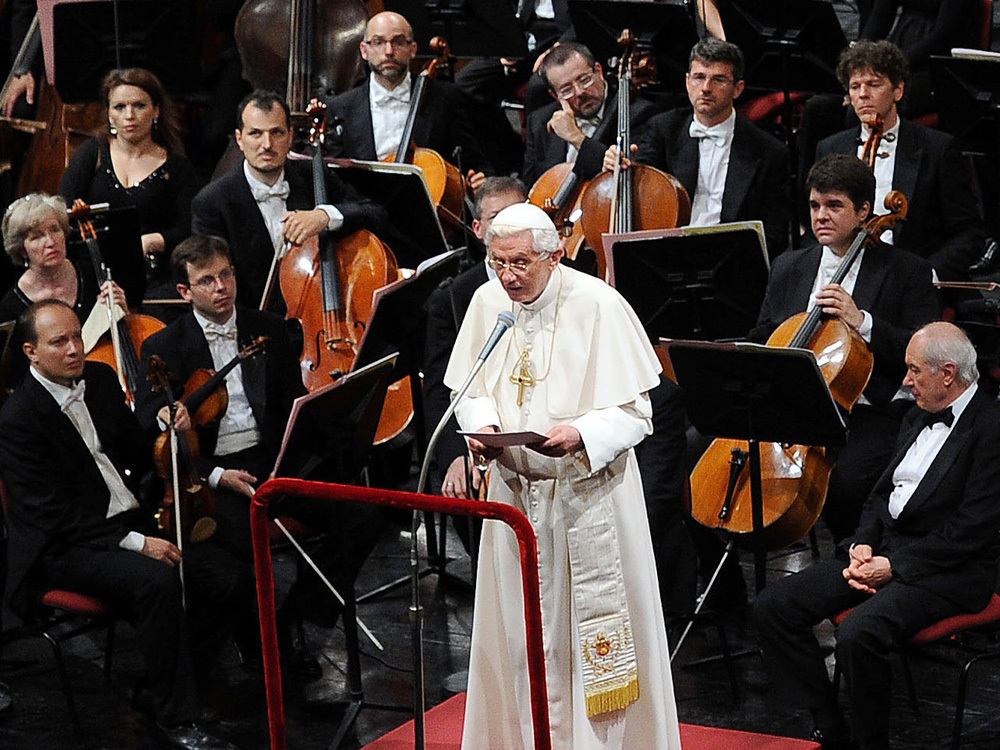 Pope Benedict XVI addresses the audience at Milan's La Scala opera house where he heard a performance of Beethoven's Symphony No. 9 conducted by Daniel Barenboim.

After tomorrow, Pope Benedict XVI will experience that bittersweet relief felt by millions of less lofty workers worldwide — retirement. And leaving the top spot in the Catholic Church, at least in theory, will afford the pope emeritus time to indulge in one of his great passions, music.

Music and popes have a long association. Pope Gregory I, from the 6th century, is often credited (slightly inaccurately, as it turns out) with helping shape Western plainchant, which still bares his name today as Gregorian chant. And there's Benedict's predecessor, Pope John Paul II, whose passion for music included hiring his own musical advisor and cultivating chummy relations with such Polish composers as Henryk Górecki and Krzysztof Penderecki.

Benedict's ear for music is something of a family trait. As a youngster, Joseph Ratzinger played the harmonium with his brother — their parents believing it was practical stepping stone to the organ. Joseph also practiced piano, an instrument he still plays today. But it was older brother Georg who took full advantage of that early preparation. While on track for the priesthood himself, Georg also studied music. For 30 years he served as the kapellmeister of St. Peter's Cathedral in the Bavarian city of Regensburg, home of the renowned Regensburger Domspatzen choir. And in November, at a private Sistine Chapel concert, Benedict attended a performance of his brother's own choral composition Missa Anno Santo.

Brotherly love aside, Benedict's favorite composer is Mozart. The Roman Catholic news magazine Inside the Vatican reported that the Sunday following his installation as pope found Benedict playing Mozart on the piano in his old apartment.

"His music still touches me very deeply, because it is so luminous and yet at the same time so deep," Benedict (then Cardinal Joseph Ratzinger) said in his book Salt of the Earth. "His music is by no means just entertainment; it contains the whole tragedy of human existence."

His music is by no means just entertainment; it contains the whole tragedy of human existence.

With a reputation for conservative views (as a cardinal he was branded "God's Rottweiler"), Benedict's musical tastes run, not surprisingly, straight down the center of the meat and potatoes repertoire.

Along with Mozart, Beethoven is another favorite. Earlier this month, the Pope heard Beethoven's "Eroica" Symphony conducted by Zubin Mehta at the Vatican. Last June the pontiff attended two performances of the Ninth Symphony — one at Milan's famed La Scala opera house and another at the Castel Gandolfo (the papal summer residence), both conducted by Daniel Barenboim. In remarks after the Milan performance, Benedict not only thanked Barenboim for his "intense and moving interpretation," but also commented about Beethoven's groundbreaking musical structure:

Although following essentially the traditional forms and language of the classic symphony, Beethoven makes one perceive something new already from the breadth without precedents of all the movements of the work, which is confirmed with the final part introduced by a terrible dissonance, of which the recitative stands out with the famous words "O friends, not these tones, let us intone others that are more attractive and joyful," words that, in a certain sense, "turn the page" and introduce the main theme of the Hymn to Joy. It is an ideal vision of humanity that Beethoven designs with his music: "the active joy in brotherhood and reciprocal love, under the paternal gaze of God" (Luigi Della Croce).

A few weeks before, the Pope attended another high profile concert. To celebrate the seventh anniversary of his election to the papacy, Riccardo Muti led a Vatican performance of music by Verdi and Vivaldi.

Like his immediate predecessor, Benedict's musical resume also includes releasing an album. Alma Mater, issued four years ago, is cut from similar cloth as one by John Paul II. Papal phrases and liturgical chants (perhaps from homilies or speeches) are layered over urgent strings and vaguely world music beats. Tom Service, writing bluntly for the Guardian, didn't hold back when he described Benedict's album as a "pseudo-spiritual soup of intoned prayer, bastardised Gregorian chant, syrupy orchestral arrangements and portentous vocalizing."

Perhaps in his newly acquired spare time, the pope emeritus should stick to plunking out some sensible Schubert on his piano and taking in a few more Beethoven concerts. But if the German-born pontiff feels a little musically homesick on his last day, he could always skip out a little early and hop a train back to La Scala to catch a production of Wagner's Flying Dutchman. After all, what are they going to do? Fire him?