Accessibility links
How Does A Jewish Artist Tell The Ultimate Christian Story? : Deceptive Cadence How does an Argentine Jewish artist approach the ultimate Christian narrative? MacArthur "genius" Osvaldo Golijov says it's by creating a "Latin American Jesus." His Passion According to St. Mark was recently staged at Carnegie Hall with a diverse group of singers from New York schools. 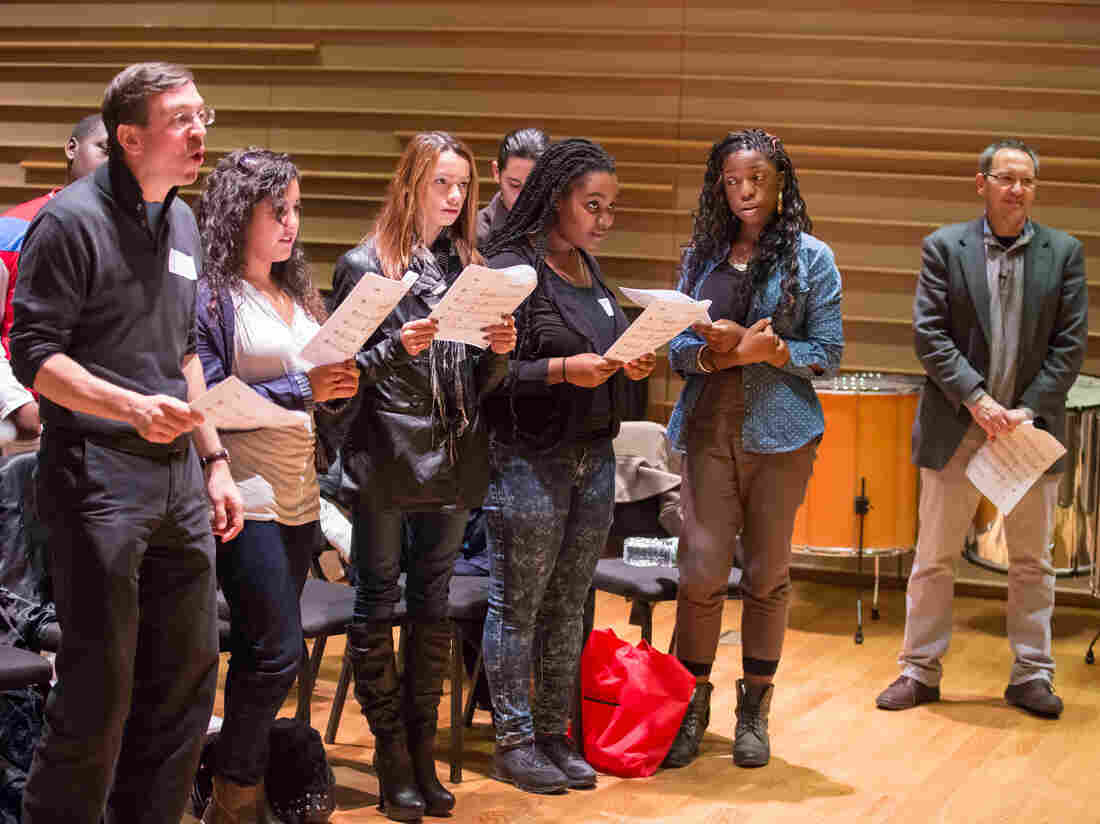 A coach and high school students work on Osvaldo Golijov's Passion According to St. Mark with the composer (right) in November 2012. Chris Lee/courtesy of Carnegie Hall hide caption 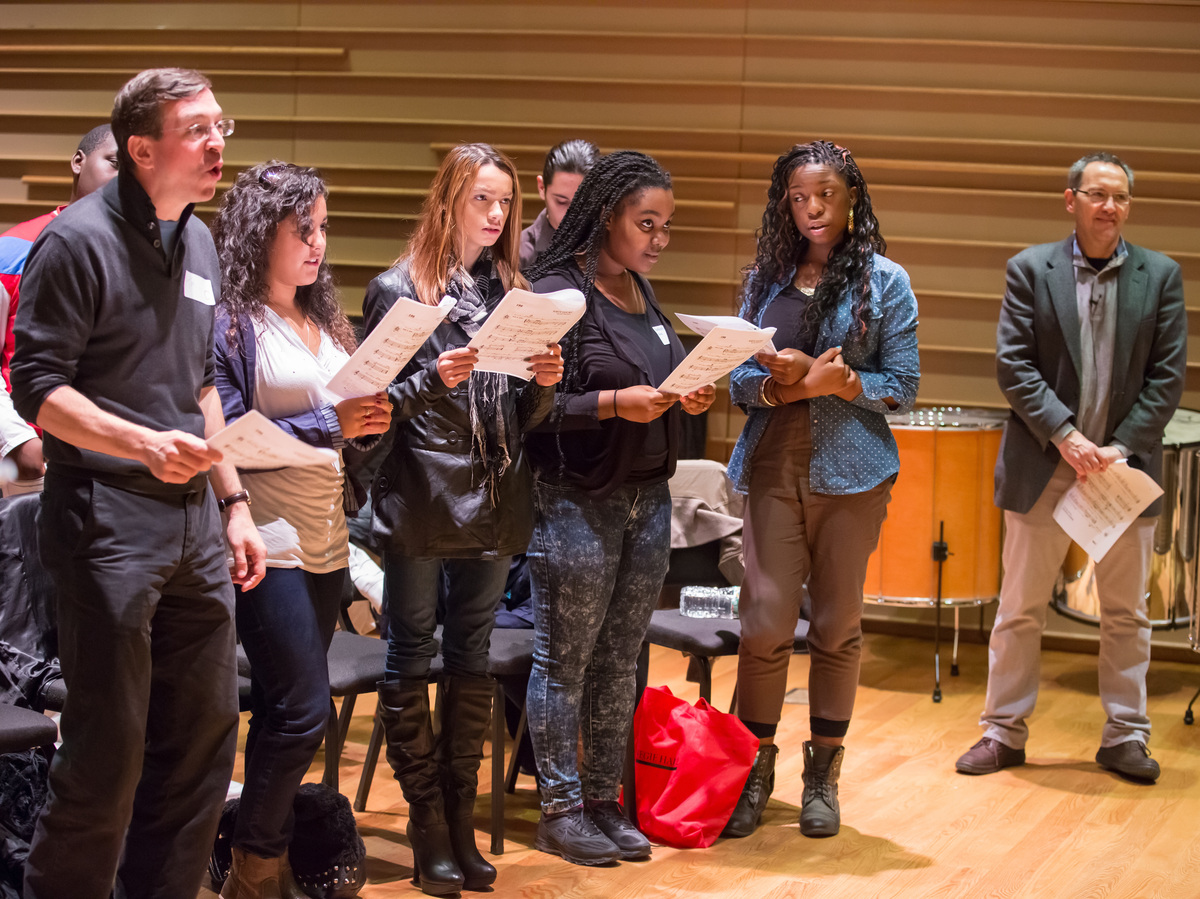 A coach and high school students work on Osvaldo Golijov's Passion According to St. Mark with the composer (right) in November 2012.

Salsa rhythms, Brazilian martial arts and a Jewish prayer of mourning: It's not exactly what you would expect from a classical composer's setting of the Gospel according to St. Mark. But that's exactly what Argentine Jewish composer Osvaldo Golijov, a MacArthur "genius," did when he was asked to write a choral work based on one of the gospels, in a hugely acclaimed piece that's been presented around the globe, from Rome to Sydney to Caracas.

As we head toward Easter, Golijov's La Pasión según San Marcos (The Passion According to St. Mark) was performed March 10 at Carnegie Hall — and you can hear this performance as a stream on NPR Music.

For Osvaldo Golijov, it was a challenge. The Passion was a story he only knew from a distance while growing up in La Plata, Argentina. "I grew up with I think a thorough knowledge of the Old Testament," he says, "but almost nothing — just hearsay — about the New Testament. To me, the paradox was to grow up very Jewish in what was an officially Catholic country at the time. So I was curious."

And so were some of the performers in the current production, whose chorus includes students from across New York City. Shaniqua Jeffries is a 22-year-old alto and a devoted Christian. She wanted to know what it was like for Golijov, as a Jew, to be writing music about Jesus.

"I wondered whether or not he had questions about it while he was writing the piece," she says. "Like whether it questioned his beliefs, or did it not question his beliefs? Or did it add stuff? I don't really know if he's been connected to it as spiritually a Christian believer would be."

Golijov says that as a Jew reading the Christian Bible, he found a transcendental message: "When I asked within the Jewish community, 'What is so revolutionary?' they would say, 'Well, it was simply an extension of what Hillel did, what the Jewish rabbis have said.' But when I started to learn the New Testament for real, to prepare to write the Passion, I realized how transcendentally different the message was, even if there are things that you can tell are in a line that started by Hillel. The entire paradigm has changed with Jesus.

"The two most important things I learned were the shifting of the paradigm toward love as the foundation of life and transcending the fear of death."

To help convey that, the composer incorporated some pretty lively music — sometimes in rather shocking ways. The introduction of Judas Iscariot is set to a hot Afro-Cuban dance; the crucifixion itself is accompanied by a samba that wouldn't be at all out of place at a Brazilian carnaval.

"I never expected a Passion to have this funk and Spanish and everything inside it. I never thought I would be able to sing them," says Andrew Farella, a 16-year-old bass in the chorus. He and his friend Jerry Ortiz, another 16-year-old bass, say they're thrilled to hear all these different kinds of music within Golijov's work — ones they know well from their own lives.

"I'm actually very excited to do this piece, me being from the Latin culture," says Ortiz, who is Dominican and Puerto Rican. "Everything that's in here is based on my culture, my background. So I can feel the music when we sing it. I was kind of surprised to hear African and also Indian stuff. But he talked about how in Latin America we come from three places. There's our white side, our Native American side and there's our African side. And that's basically what La Pasión is — coming from those three to combine into one, the Holy Trinity."

Golijov says evoking that mix was essential to his vision of the Passion. And it's not just in the music. He wanted the language he used to reflect the multiracial and multicultural reality of Latin America.

"The story is so well-known that you can almost sculpt the language," Golijov says. "I would say that 90 percent of the people listening to the Passion know what's going on. So therefore the language is not so much a conveyor of sense as it is of sound. You can rhythmicize the language. And that's what I did. For the translations to Spanish, rather than using the academic translations, I bought several copies that usually handicapped vendors sell in the subway stops and so forth, and you pay what you have for them."

"And then from those popular translations," the composer continues, "I still changed some words for synonyms that would end with the stresses on the last syllable, because to me it was almost like what in my mind is an Africanization of the Spanish. To me, it was very important to bring all the African, Yoruban traditions that merged with both the Spanish and the Portuguese colonizing traditions to create this metamorphosis of the Passion that has happened in Latin America."

He also incorporated his Jewish faith and Jewish texts into this most Christian of stories, including part of the Lamentations of Jeremiah and the Jewish ritual prayer of mourning called the kaddish.

"Even for me as a Jew, even if I do not believe in the physical resurrection of Jesus," Golijov says, "I believe that his message of love and of life triumphing over death had to finish the Passion. Therefore, I wrote for the end the kaddish, which is the prayer for the dead that you sing at the grave of your beloved ones. The beauty of that prayer is that it does not mention death. It is a hymn to life, to God — and to silence beyond words and beyond music."

It's a message that Golijov hopes can explore the many layers of meaning in this story, for many different kinds of people.