Accessibility links
Remembering Pulitzer Prize-Winning Composer Robert Ward : Deceptive Cadence The composer is best remembered for his operatic retelling of Arthur Miller's play The Crucible, which debuted at New York City Opera in 1961 and has since been staged all over the globe. Ward died Tuesday morning at age 95. 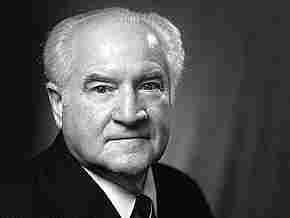 Robert Ward, the American composer who won the Pulitzer Prize for bringing Arthur Miller's play The Crucible to the opera stage, died early Wednesday of natural causes. The composer, who was also a National Endowment for the Arts Opera Honoree, was 95 years old. He had been living independently until early this year in a retirement home in Durham, N.C., according to his son Mark Ward, the assistant principal cellist of the Delaware Symphony Orchestra, who confirmed the death to NPR Music.

Born in Cleveland in 1917, the elder Ward was an Army bandmaster in the Pacific theater during World War II. His Second Symphony was commissioned by the National Symphony Orchestra and premiered three years after the end of the war. A onetime student of Aaron Copland at Tanglewood, he was trained at the Eastman and Juilliard schools. Ward went on to a distinguished academic career that included a decade of teaching composition at Juilliard, five years as president of the North Carolina School of the Arts and a decade as a professor at Duke University.

In October 2011, Ward was a recipient of the National Endowment for the Arts Opera Honors in an event hosted by NPR's Nina Totenberg in Washington; the NEA cited in particular Ward's "concern for social and political issues of the times as well as his interpretation of American idealism." In the 1950's and 60's, Ward was also awarded three Guggenheim Fellowships for his work.

An excerpt from a 2010 Crucible production at the University of Tennessee.

In addition to composing seven symphonies, eight operas and a range of instrumental and choral works written in an open, accessible style, he also served as an executive at the classical music publisher Galaxy Music Corporation.

Mark Ward recalled to NPR Music the encouragement his father gave him and his four siblings, who include Melinda Ward, senior vice president for content at Public Radio International. "He was great because he allowed us and made it possible for us to follow our dreams," said the younger Ward. "He told all of his kids we need good people in arts management, and we need people who know it from the inside."

Opera composer Michael Ching, the music director of Nickel City Opera in Buffalo, N.Y., studied with Ward at Duke and described him as "a great teacher and colleague. His best lesson about opera to me was if you can't play it and sing it, think carefully before you write it," noted Ching. "For my senior project at Duke, he let me write a one-act opera, which we made into a small production the semester after I graduated. He made me play and sing it and anything I couldn't play or sing — at the same time, mind you — got cut from the show."

Ward's opera The Crucible, with a libretto adapted by Bernard Stambler, was commissioned by New York City Opera and has been mounted frequently since its 1961 premiere, including a 50th-anniversary production at Sarasota Opera in Florida in 2011.

"Physically, I'm 93, so I don't feel quite as active as I was then," Ward told an interviewer for the Sarasota Opera. "But, in terms of the opera [The Crucible], it's got staying power. It keeps being produced, and now all over the world. And I think it's the political thing which it holds for many countries in the world at this point. And so I'm naturally very happy about that because that was what attracted us to it, this powerful story."

And that story changed his family's life. "I was in the 8th or 9th grade and came home from school," Mark Ward recalled about one particular day in 1962. "My parents were in the kitchen drinking champagne. I said, 'What's going on here?' That's how I found out he won the Pulitzer Prize."