Accessibility links
Appreciating A Pillar Of The Chicago Sound: Trumpeter Bud Herseth : Deceptive Cadence The legendary musician, widely adored by brass players and fans around the globe, spent 53 years as the principal in the Chicago Symphony Orchestra. He died Saturday at age 91. Watch some of his performances, including an extraordinary Mahler Fifth Symphony.

Appreciating A Pillar Of The Chicago Sound: Trumpeter Bud Herseth

Appreciating A Pillar Of The Chicago Sound: Trumpeter Bud Herseth 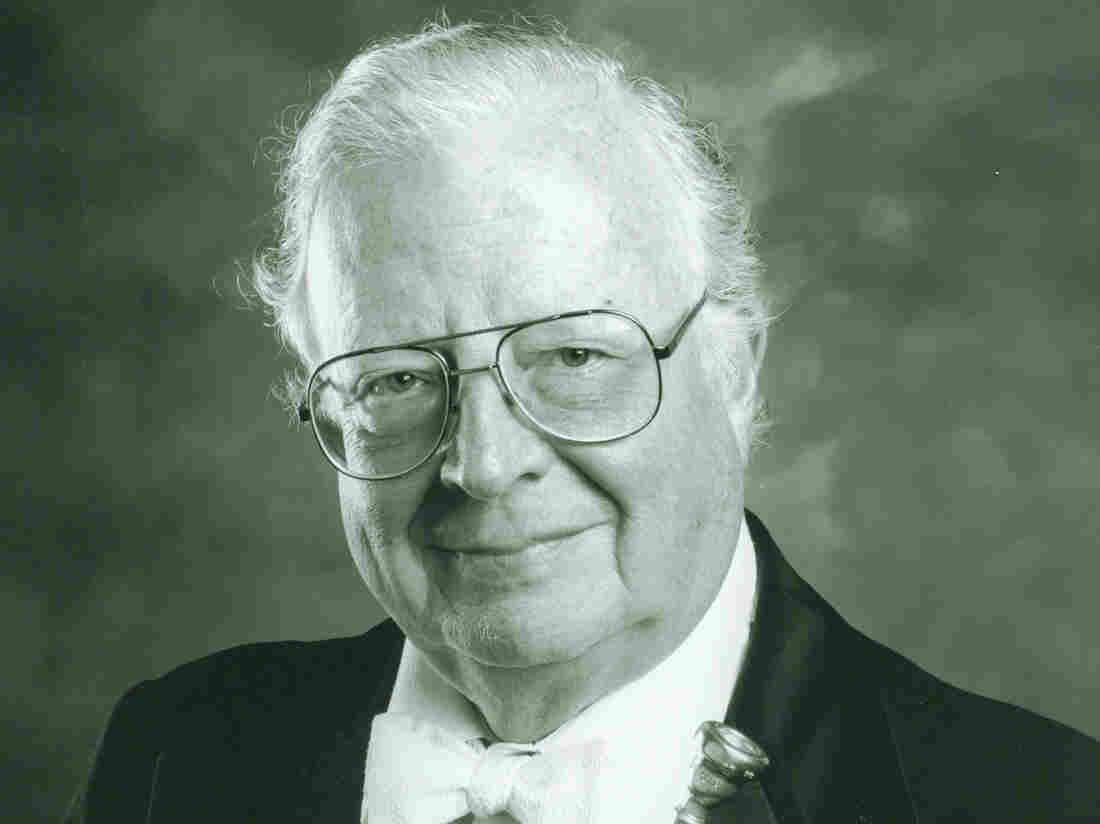 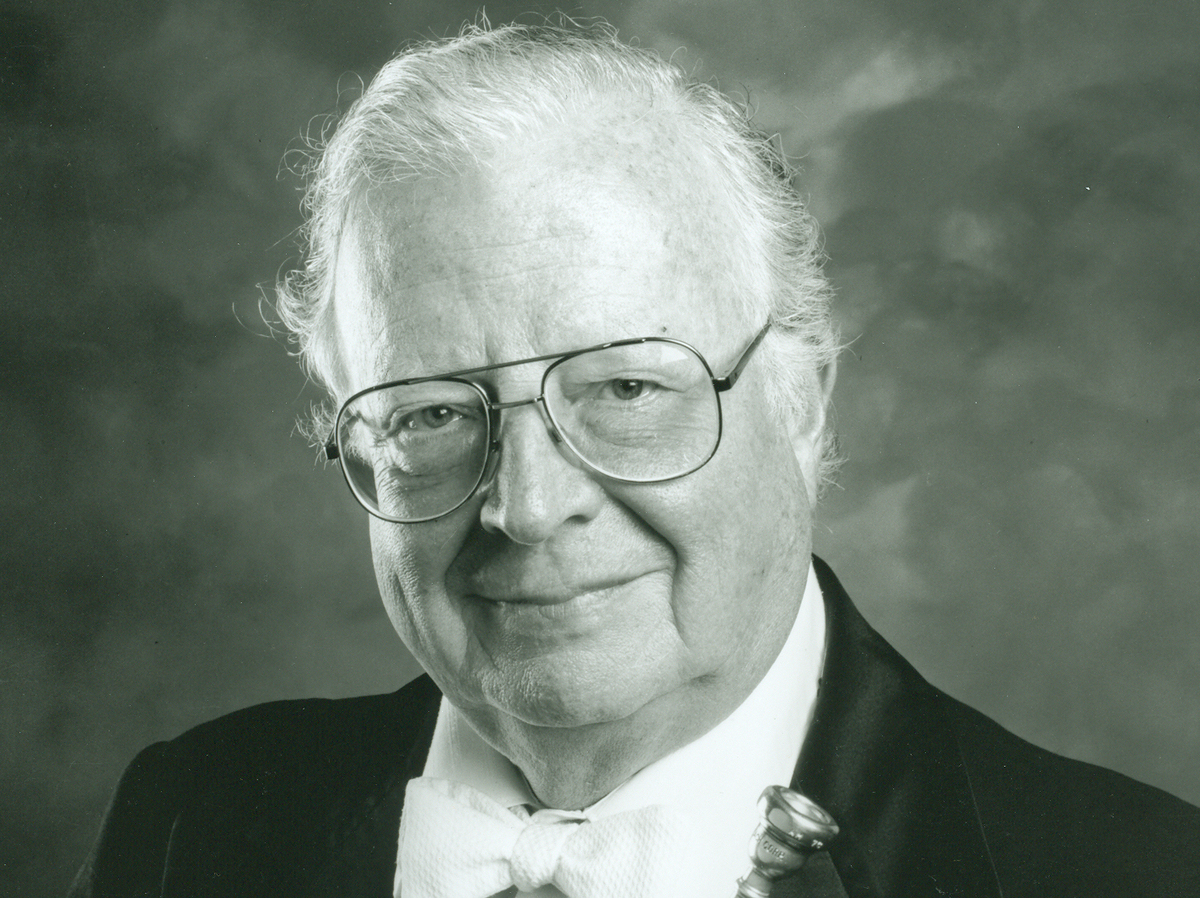 The late trumpeter Bud Herseth, former principal player for the Chicago Symphony Orchestra for over 50 years.

For more than 50 years, Adolph "Bud" Herseth was the principal trumpet player for the Chicago Symphony Orchestra, an ensemble widely adored by brass aficionados for its seemingly limitless power and impeccable style. Herseth, who was one of the pillars of that famous Chicago sound, died this past Saturday at age 91 of undisclosed causes.

Before his 2004 retirement, Herseth formed part of the foundation for the CSO style, along with other players like principal French horn Dale Clevenger, who joined the orchestra at age 26 in 1966 and is retiring at the end of the CSO's 2013 Ravinia Festival season, and Jay Friedman, the orchestra's principal trombone, who came to the CSO in 1962, as well as their late colleague Arnold "Jake" Jacobs, principal tubist from 1944 to 1988.

Among his stellar performances is the famous beginning of Mahler's Fifth Symphony. As he told an International Trumpet Guild interviewer in 1998, "I've never had a big ambition to be a soloist. People often ask why I didn't take advantage of the opportunities to become more of a soloist. My honest answer is that I can't name one single trumpet solo piece that is as musically gratifying to me as playing a Mahler symphony."

Hired as a 26-year-old by then-music director Artur Rodzinski, Herseth called his position as the Chicago Symphony Orchestra's principal trumpet "the only job I ever had." And as Minneapolis Public Radio's John Birge noted at the time of Herseth's last CSO performance, he almost had to quit four years in, after a bad automobile accident. His broken teeth cut through his lower lip, and from which he suffered permanent nerve damage. After a few months' recuperation in which he essentially had to relearn how to play, he was back onstage — as one of the architects of Chicago's famed sound, playing under countless guest conductors and five CSO music directors: Rafael Kubelik, Fritz Reiner, Jean Martinon, Sir Georg Solti and Daniel Barenboim.

In an MPR interview he gave shortly before his retirement, Herseth recounts what could have been a standoff with the notoriously demanding Reiner, and then talks about his own approach to the Mahler Fifth:

Born in Lake Park, Minn. as the son of a school band director, Bud Herseth met his wife Avis in fourth grade, when the two were in the same trumpet section of the school band in the 500-person town of Bertha, Minn.; they married in 1943. Avis Herseth survives her husband, as does a son, Stephen, and daughter Christine Hoefer, and several grandchildren and great-grandchildren.

Herseth received his bachelor's degree in both mathematics and music with a minor in education from Iowa's Luther college. As he told the International Trumpet Guild, "At that time my choice was either to teach or work for an insurance company as an annuity or actuarial specialist. I'm glad I ended up with this career...I still enjoy playing, and they're nice enough to let me do it, so why not?"

During World War II, Herseth played in a Navy band, using his wife's trumpet. (As he told the International Trumpet Guild, he couldn't afford both both a cornet and trumpet of his own.) After the end of the war, on the GI Bill, he enrolled at the New England Conservatory to study with the principal and second trumpets of the Boston Symphony Orchestra, George Mager and Marcel Lafosse, for two and a half years.

During Herseth's time in Boston, he received a telegram inviting him to audition for the position of third trumpet at the Chicago Symphony Orchestra with Rodzinski. After hearing him for about an hour, Rodzinski offered this young man — who had no professional experience at all — the job of principal trumpet. That was 1948. As a 26-year-old, he joined the CSO, and remained principal trumpet for 53 years. He stayed on three more seasons as principal emeritus, and retired fully from the orchestra in 2004. His former position in the Chicago Symphony Orchestra is now named in his honor: the Adolph Herseth Principal Trumpet Chair.