Accessibility links
Why Jazz Musicians Love 'The Rite Of Spring' : Deceptive Cadence A 100-year-old ballet, composed by a Russian for a French audience, has become something of a standard in an idiom which didn't exist when it premiered. Whether covered, quoted or praised, Stravinsky's masterwork has inspired multiple generations of improvisers.

Why Jazz Musicians Love 'The Rite Of Spring'

Why Jazz Musicians Love 'The Rite Of Spring' 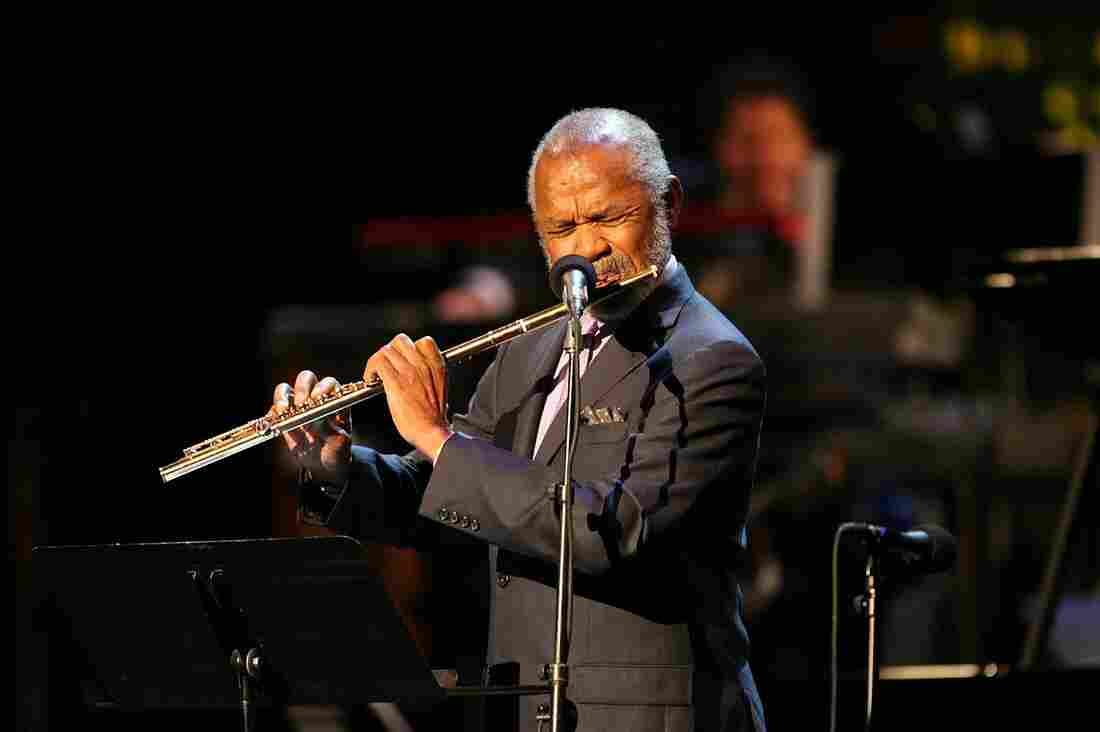 Flutist Hubert Laws is one of many jazz artists to have recorded an adaptation of themes from The Rite of Spring. Frederick M. Brown/Getty Images hide caption 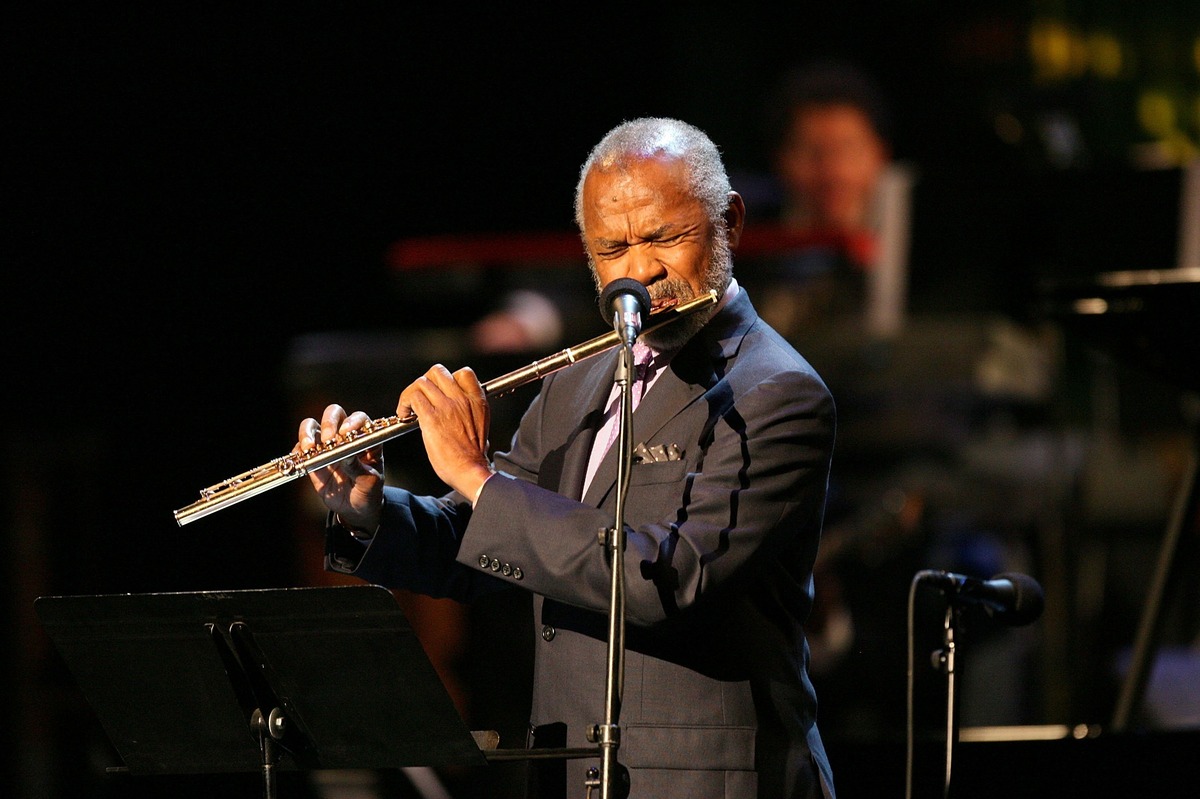 Flutist Hubert Laws is one of many jazz artists to have recorded an adaptation of themes from The Rite of Spring.

A 100-year-old ballet, composed by a Russian for a French audience, has become something of a jazz standard.

Igor Stravinsky's orchestral score for The Rite of Spring has been interpolated on record by musicians like Ornette Coleman, Alice Coltrane and Hubert Laws. Many, many more knew The Rite, and would quote famous passages during their solos — several recordings exist of Charlie Parker summoning a lick or two. Jazz musicians still love the work. The last two years alone have seen two new arrangements of the entire thing: one adapted for a big band; another from the trio The Bad Plus.

The Rite and jazz music at large can be seen as cousins. Roughly contemporaneous, both emerged in the 1910s, experienced their share of rejection and wound up among the most profoundly influential musical developments of the 20th century. Along the way, they've intersected at curious junctures as they matured in parallel.

So how did a "classical" ballet become so important to jazz musicians?

You might hypothesize that Stravinsky was influenced by jazz, and you'd be half right. He certainly admitted certain jazz influences in writings and interviews, and as early as 1918 his theatrical work Histoire du Soldat incorporated a movement called "Ragtime" — taking after the style often described as a precursor to modern jazz. Other works inspired by ragtime records followed soon.

Later, long after he had actually heard live jazz, Stravinsky wrote a piece for the Woody Herman Orchestra, a big band quite popular in its day. The result was a short work called the Ebony Concerto, featuring Herman on clarinet; it premiered in 1945 and was recorded, with Stravinsky conducting, in 1946. In later histories, members of the Herman Orchestra declared their love for Stravinsky's work – "one of our musical Gods," pianist Ralph Burns wrote in the liner notes to the Blowin' Up A Storm compilation – and also mentioned how difficult it was for them, many of whom were not classically trained, to learn the highly technical work. (Ironically, the catalyst for the commission came about through a fib a band member told about having hung out with Stravinsky in Los Angeles and playing him Woody Herman records.)

Still, with no improvisation and little in the way of swing, you'd be hard-pressed to call anything Stravinsky wrote "jazz." Herman himself described the Ebony Concerto as "pure Stravinsky and [it] had nothing to do with jazz."

Perhaps Stravinsky was influenced by jazz, but jazz itself would have been impossible for The Rite of Spring. When the ballet was first presented in 1913, jazz had yet to be commercially recorded, and Stravinsky was living in Europe.

A better key to understanding the relationship between The Rite and the jazz community probably lies in an examination of the work itself. Like Stravinsky's two ballets which preceded it, The Firebird and Petrouchka, The Rite was written for Sergei Diaghilev's Ballets Russes company in Paris. Like those two earlier ballets,The Rite grounds itself in folk-inspired forms and melodies.

Where The Rite differs is in the extreme experiments Stravinsky devised in meter, rhythmic syncopation and dissonance — experiments which allowed Stravinsky to later deny his folkloric inspiration, when his aesthetic philosophies had changed. But scholars like Richard Taruskin have pinpointed the deeply embedded folk elements of The Rite.

To enact this faux-primitive fantasy for dancers, Stravinsky often calls on insistent pulses, interrupted by oddly phrased or even violent accents. Yet he manages to generate fitting melodies atop this. In one of his sketchbooks for The Rite, Stravinsky writes: "There is music wherever there is rhythm, as there is life wherever there beats a pulse."

Jazz, too, sublimates folk traditions (of African-Americans) into muscular, polyrhythmic undertow. As jazz pianist Julian Joseph once demonstrated on video for The Guardian, the layering of melody over an insistent rhythm, as well as the richness of harmonic information on offer, are analogous to the work of jazz musicians, who are both bound and liberated by the imperative to swing, and who seek to push harmonic limits.

"[T]here seems to be a perfect storm of bite, grit, rhythm and dissonance," the saxophonist and composer/arranger Darryl Brenzel wrote in an email to me. Brenzel recently adapted the entire Rite of Spring for the Mobtown Modern big band, and blogged about the experience. He also wrote to me:

Much of Stravinsky's work followed these odd accents and the measures tended to be organized by what these rhythms were doing, hence the many odd meters. Much (not all) of the volume or loud parts revolve around parts that have punches or many stabbing figures. This is much like big band. In that idiom the volume is rarely from a sustained type melody but rather some hard hitting rhythms. A lot of loud orchestral works will have a more sustain or at least flowing type melody when being loud. Not so with Igor. Stravinsky was also pushing things a lot harmonically and I think jazz musicians in general have an appreciation for this. We tend to want to take a tune that people know and see how far we can take the harmony and still retain the tune.

One of bebop's chief progenitors, saxophonist Charlie Parker, was a voracious listener to anything and everything, but he maintained a special appreciation for Stravinsky's work. If one man's memory is to be trusted, when Stravinsky walked into a club where Parker was playing in 1951, Parker called one of his fastest tunes, started his second solo chorus with a quote from The Firebird, never acknowledged Stravinsky's presence despite much guffawing from his table, and didn't miss a beat.

A few other Parker-Stravinsky quotations exist on wax, with some of them documented here. A personal favorite comes from 1947, when Parker was a guest soloist on trumpeter and arranger Neal Hefti's "Repetition," as heard on a compilation called The Jazz Scene. Not only does Hefti's arrangement quote the transitional horn motif which signals the second half of the "Augurs of Spring" movement from The Rite, but Parker riffs on the same motif to start his solo.

Hefti certainly knew what he was doing — he quoted that same bit earlier that year while taking a trumpet solo, on the recording of saxophonist Lucky Thompson's "Boppin' The Blues." Hefti, a big fan of modernist classical music who later gained renown as the composer of the Batman theme, was also the Woody Herman Orchestra member who lied about having met Stravinsky — kickstarting the Ebony Concerto commission.

It makes sense that bebop artists, who were self-consciously seeking new directions in jazz, would be attracted to studying modernist composers like Stravinsky. It helped that many jazz artists were beginning to study music in colleges and conservatories — aided in large part by the G.I. Bill — where they could study composition in the European classical tradition.

The great trumpeter Miles Davis never undertook military service, but he did attend The Juilliard School in New York briefly. "I would go to the library and borrow scores by all those great composers, like Stravinsky, Alban Berg, Prokofiev," he dictated in his autobiography. "I wanted to see what was going on in all of music."

With jazz education on the rise, and Stravinsky enjoying wide currency in the jazz world, it was only a matter of time until the challenging, pulsing Rite was interpreted directly by jazz musicians. In 1971 the flutist Hubert Laws teamed with arranger Don Sebesky to create a jazz arrangement of themes from The Rite, and issued it, among other arrangements of classical works, on an LP called The Rite of Spring. (Sebesky would later record an arrangement under his own name as well.) Ornette Coleman's "Sleep Talk," or "Sleep Talking," also borrows from the famous opening bassoon melody of The Rite.

Harpist and pianist Alice Coltrane recorded the "Spring Rounds" section on the album Eternity, and she had arranged excerpts from The Firebird on a previous album. (Her son Ravi Coltrane told NPR last year that "[s]pecifically, my mom was a great admirer of Igor Stravinsky. Her favorite pieces were The Rite of Spring and, more so, the Firebird Suite.")

The Rite continues to inspire jazz musicians. Darryl Brenzel's arrangement for Mobtown Modern is available on record as The Re-(w)Rite of Spring. The contemporary piano trio EST also took on the "Spring Rounds," as previously seen here on A Blog Supreme. And The Bad Plus, of course, did the whole thing with a visual backdrop for Duke Performances in 2011.

In an essay that year, Bad Plus pianist Ethan Iverson suggested that The Rite's "red-blooded, folkloric rhythm" was key to its lasting influence. "Remember Stravinsky!" he wrote. "He had that earthy groove since birth. He denied it and did everything he could to keep others from getting it ... but he had it, which is one reason why The Rite and most of his other masterpieces will continue to gain in stature." Implicitly or not, generations of fellow jazz musicians have agreed.