Accessibility links
Tracing The Spirit Of The Early American Symphony : Deceptive Cadence Joseph Horowitz, author of Classical Music in America, guides a tour through the American symphony in its formative years — from early knockoffs of European pieces to the resolutely homegrown sound of Charles Ives. 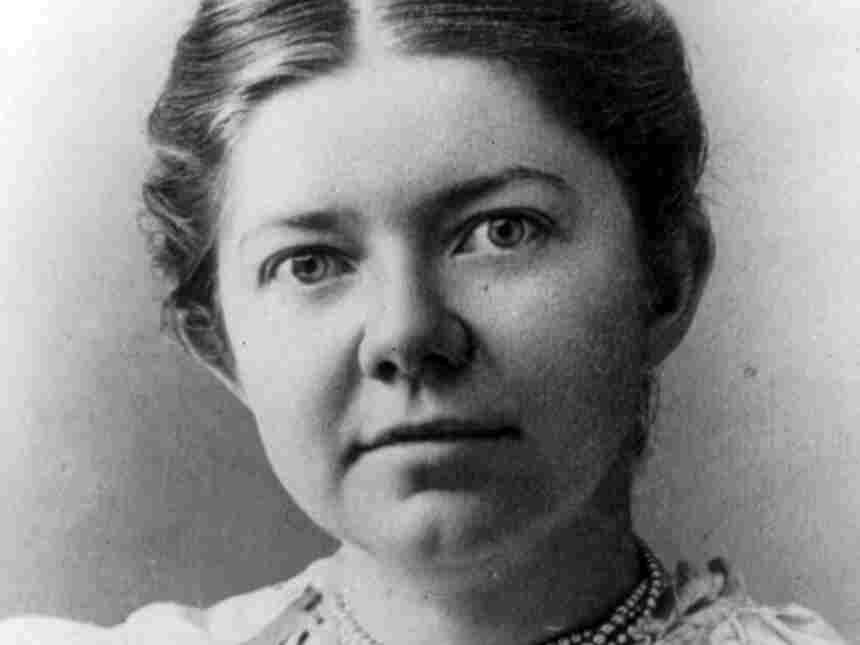 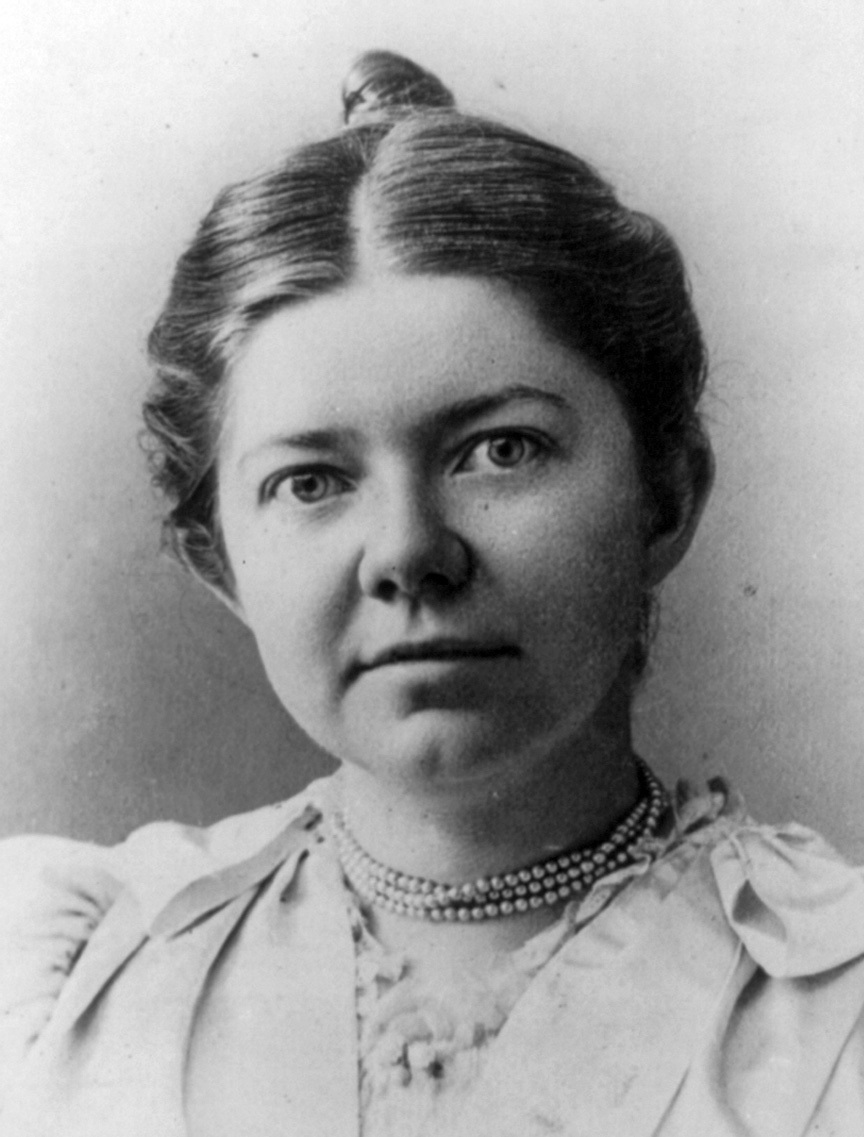 Amy Beach, with her 1896 "Gaelic" Symphony, was among America's early symphonic composers.

Leonard Bernstein, in a New York Philharmonic Young People's Concert, once summarized the late 19th century as the "kindergarten period" of American music and proceeded to make fun of George Whitefield Chadwick, Boston's leading composer from that period. But in citing Chadwick's Melpomene Overture, Bernstein stacked the deck. Because it so obviously borrows from Wagner's Tristan und Isolde Prelude, Melpomene is easy to satirize, and it hardly represents Chadwick at his best. In fact, there is no evidence that Bernstein, Aaron Copland, Virgil Thomson and others who denigrated American concert music composed before 1920 ever looked at or heard very much of it. And yet the stereotype they fostered prevails — that American composers before Copland were European clones without a voice of their own. The body of music composed by Americans before the alleged "coming of age" in the 1920s and '30s by and large remains unknown. Here is a sampling of what American symphonies sounded like in those "kindergarten" days.

Joseph Horowitz writes about American symphonies in his book Classical Music in America: A History and on his blog.

A Listener's Guide To The Early American Symphony 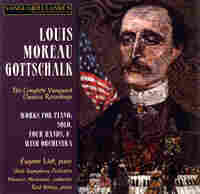 The earliest American work called a symphony that we still hear today is Louis Moreau Gottschalk's Night in the Tropics (1859), for a "monster orchestra" including Cuban percussion. The second of the two movements is a roof-rattling "Creole festival." Movement one is a divine tropical sunset-with-storm. There are — alas — no decent monster orchestra recordings of Night in the Tropics. The sublimity of the first movement in particular is barely discernible on any CD. Anyway, this wonderful work does not really belong in our survey of "American symphonies" — Gottschalk eschews any semblance of the Germanic template. 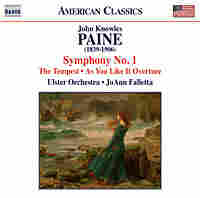 The American symphony more truly begins with John Knowles Paine (1839-1906) — who was Boston's pre-eminent composer before Chadwick came along. Paine was schooled in Berlin and sounds like it. His two symphonies (from 1875 and 1879) are big works, thirsty with ambition. The C minor First Symphony keys on Beethoven's Fifth and its famous four-note motto. The 50-minute Second Symphony, "Im Frühling," admits Schumann's influence. Paine empowered a generation of New England composers (to Chadwick, Paine's First "proved we could have a great musician, and that he could get a hearing"). But Paine's symphonies retain interest as resplendent concert works, buoyed by a pioneer's missionary zeal. Up to now, there have been no persuasive recordings, but JoAnn Falletta's forthcoming Naxos album (a portion of which is heard here) with her Ulster Orchestra should change that. 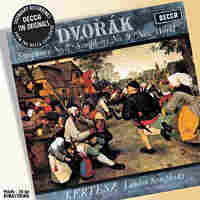 Antonín Dvořák: Symphony No. 9 'From the New World'

No history of the American symphony can omit Antonin Dvorak's Symphony No. 9, "From the New World" — still the best known, most beloved symphony composed on American soil. Dvorak's example — trumpeted by such adherents as the New York critic Henry Krehbiel — spurred Americans to compose music that "sounds American." Does the New World Symphony itself sound American? New Yorkers thought so in 1893, when it was premiered by the Philharmonic. Since they all knew Longfellow's The Song of Hiawatha, they could appreciate that the spinning, whirling opening of the Scherzo, with its tom-tom beat, was directly inspired by the spinning, whirling dance of Pau-Puk Keewis at Hiawatha's wedding. 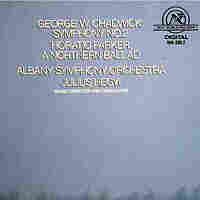 Of the Americans whose music was catalyzed by Dvorak and "sounds American," George Whitefield Chadwick (1854-1931) is the most resilient today. A salty New Englander who liked his beer, he is a composer whose truest métier is the scherzo. Chadwick's Jubilee (1895) is an American variant of Dvorak's rustic Carnival Overture (1891); it quotes Stephen Foster's "Camptown Races;" its clip-clop second theme and sunset coda anticipate cowboy films of a later era. But Chadwick was composing in an "American" style long before Dvorak turned up in New York. Chadwick's deliciously informal Scherzo in F (1884), later the second movement of his Second Symphony (1885), tweaks its own Germanic models: The orchestra giggles and guffaws. His Symphony No. 3 (1894) tries harder to be serious. Conductor and Chadwick specialist Neeme Järvi considers the rhapsodic slow movement the most beautiful in any American symphony.

Another American symphonist influenced by Dvorak is Amy Beach (1867-1944), whose "Gaelic" symphony in E minor (1896) is a response to Dvorak's "New World" (in the same key). It was Dvorak's example, mining plantation song and Longfellow's Hiawatha, that inspired Beach to compose a symphony drawing on her own Celtic roots. The monothematic second movement derives from a Gaelic love song. 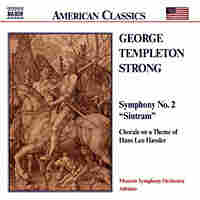 The dark horse in this story of the early American symphony is George Templeton Strong (1856-1948), the only American who commands something like the heights and depths of the erotic, demonic abandon and mystical, religious ecstasy that we associate with Liszt and Wagner. Strong's 50-minute "Sintram" Symphony (1888), inspired by Dürer's phantasmagoric "Knight, Death and the Devil," steaming with Tristan, Parsifal and Bruckner, is formidably epochal. At the work's triumphant premiere in Brooklyn and Manhattan in 1892 and 1893, critic Henry Krehbiel questioned whether the huge first movement "has been equaled by an American symphonist in strength and fitness of idea and mastery of treatment." In Switzerland, where Strong resettled, the symphony was conducted by Ernest Ansermet in 1912 and 1932. An American revival of this huge work (which makes no attempt to sound American) is long overdue. At least we have a strong recording, on Naxos. To my ears, this — not Chadwick's Third — is the American symphony with the most beautiful slow movement.

It is Charles Ives (1874-1954) who maps the pinnacle of the early history of the American symphony. It seems to me that Ives' Second (1899-1909) and Fourth (1912-1925) are in fact the two — and only two — Great American Symphonies. The Second may be read as a rambunctious parody of the Romantic symphony as practiced abroad, stitched together with American fiddle and hymn tunes, spiced with allusions to Wagner and Brahms. The Fourth is a grand exercise in uplift, buoyed by the American Transcendentalists with whom Ives passionately identified. Ives embodies a classic American creative template — of the self-made artist who spurns finishing school abroad. Melville, Whitman, Twain and Gershwin are also of this type. It is partly the "unfinished" in Ives that clinches his American authenticity and sets him apart from American symphonists to come.