Accessibility links
Carnegie Hall's Barnstorming Youth Movement : Deceptive Cadence Touring the world with Valery Gergiev and Joshua Bell is the opportunity of a lifetime for 120 teenage musicians taking part in the first National Youth Orchestra of the United States, organized by Carnegie Hall. Can their experience give a boost to classical music more generally? 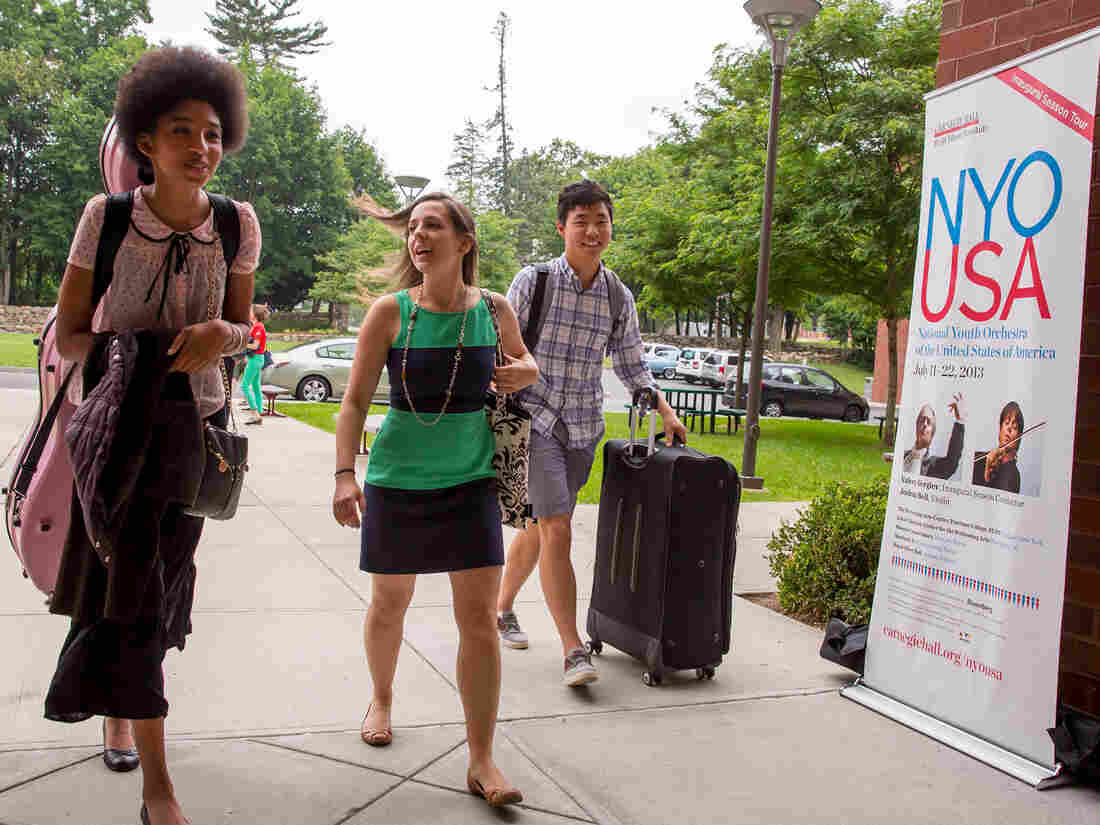 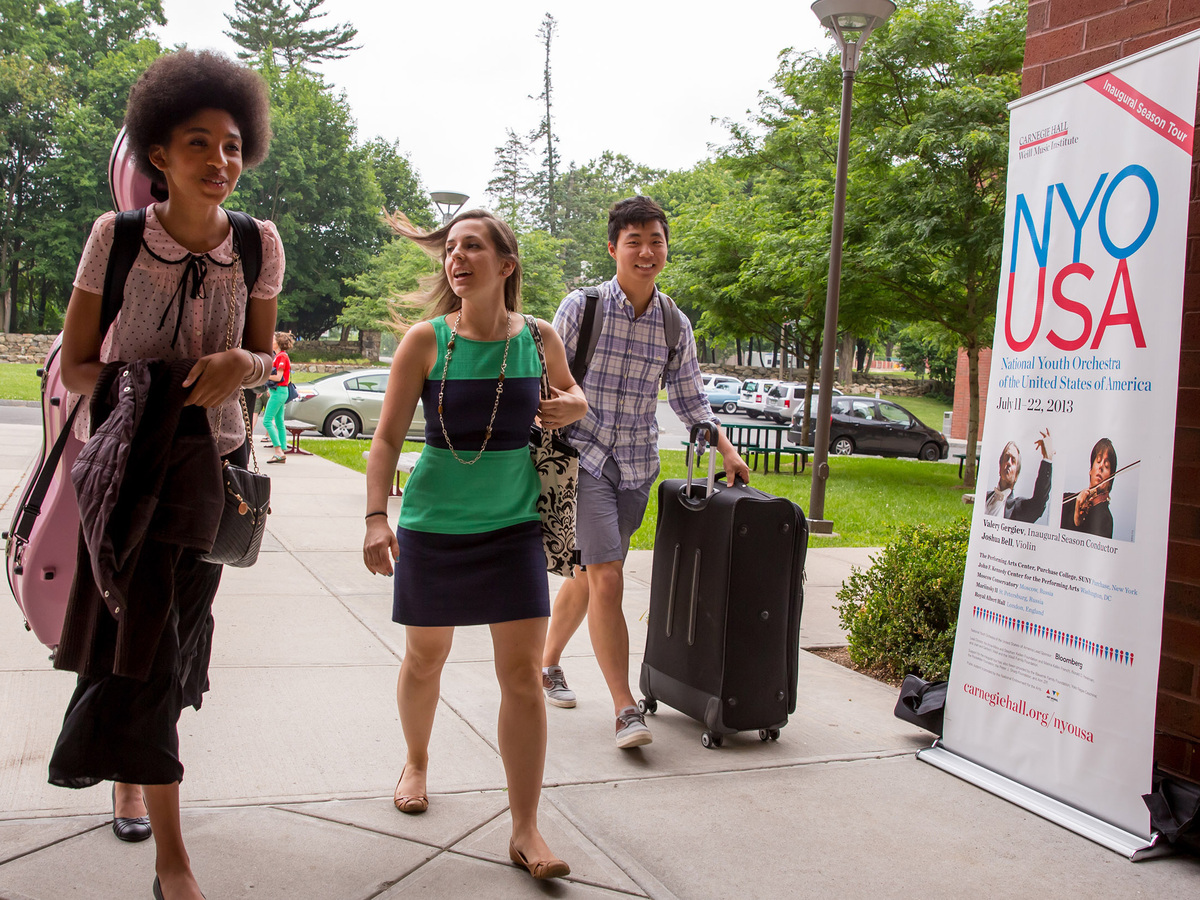 This is the kind of opportunity most classical musicians can only dream about: to be invited to spend part of the summer with an orchestra touring the world — Washington, Moscow, St. Petersburg and London — with two of the biggest names in classical music, conductor Valery Gergiev and violinist Joshua Bell.

You'll learn a ton, make lots of new friends, have the experience of a lifetime and earn boasting points for many years to come. But this chance is only available to you if you've managed to prove to a panel of judges that you're really among the best of the best — and if you happen to be between the ages of 16 and 19. That's the basis of the new National Youth Orchestra of the United States of America, an ensemble created and sponsored by Carnegie Hall. It's making its inaugural tour and has opened in a big way.

After their debut on their "camp" grounds of Purchase College in New York Friday, the NYO-USA went on to play at the Kennedy Center in Washington. Tuesday, they performed at the Great Hall of the Moscow Conservatory in Russia. Thursday, they'll give a concert at the new Mariinsky II hall in St. Petersburg — as only the second international ensemble to give a concert there, after the London Symphony Orchestra. They're wrapping things up in London Sunday with a sold-out Proms concert at Royal Albert Hall.

It's pretty heady and inspiring stuff, including a program that opens with a work written especially for the new ensemble, Magiya (Magic), by composer and Nevada native Sean Shepherd. Bell is the soloist in the Tchaikovsky concerto and Gergiev leads Shostakovich's blockbuster Tenth Symphony.

Since Carnegie Hall first announced the program, executive and artistic director Sir Clive Gillinson has been fond of comparing the NYO-USA initiative to the Olympics. But, as he pointed out in his introductory remarks to the ensemble's first concert, there are 120 players in the NYO-USA, and they're all aged between 16 and 19 years old — which, by his reckoning, makes the orchestra even more competitive than Team USA for the 2012 Olympics, which boasted 530 athletes ranging in age from 15 to 54.

Young musicians from 42 states were admitted to the orchestra. The 120 teens come from hometowns as far afield as Honolulu, Hawaii, Hattiesburg, Miss. and Eagle River, Alaska. Their ranks include a neutrino physics researcher, a pheasant hunter, a member of the National Slavic Honor Society, an 18-year-old college graduate, a sheep farmer and a Highland dancer. (If you're feeling a little less-than-snuff in such company, be assured that there were plenty of them who listed "watching movies" as one of their main hobbies.)

As our friend Anne Midgette pointed out in her Washington Post feature about these players a few days ago, America's teenagers are not exactly going wanting for great youth orchestras. Every major metropolitan area seems to boast exemplary groups, and the summer festival possibilities are astounding for super-talented players.

But this National Youth Orchestra of the USA has set out to be more than that. At the private reception that followed their debut performance, Gergiev said he believed that the new orchestra had the potential to improve Russian-American relations more than any traditional means of diplomacy. (Coming from a highly influential artist who is deeply involved in Russian politics — and in the midst of the Edward Snowden affair that is straining those bi-national ties — it was hard not to read some measure of meaning into those comments.)

Carnegie's name, as Gillinson observed at the first concert's reception, certainly opens some very big and heavy doors. Gergiev doesn't take other U.S.-based youth orchestras on tour. The Mariinsky doesn't invite other young American players en masse to their hall, and American youth orchestras definitely do not get the chance to play at the Proms in London and have their performance broadcast live on BBC Radio 3, or televised on BBC Four. None of those things would happen without Carnegie's financial backing or their imprimatur.

There's also the matter of finances. Training at a summer festival is an extremely expensive proposition, even though many offer extensive financial aid and scholarship opportunities. NYO-USA is entirely tuition-free and based on merit. Gillinson and his team certainly leaned on Carnegie Hall's name and reputation to help round up the financing for this initiative.

First, it helps extend the Carnegie Hall brand (to use an odious marketing term) to international — and hopefully both young and international — audiences. Unlike other arts organizations, Carnegie doesn't have a "house band" to act as its ambassadors. The Philadelphia Orchestra can go to China (and pick up a ton of viral chatter on the way) to win new fans; the New York Philharmonic went to North Korea, with the encouragement of the State Department, as a gesture of political goodwill. As a venue that doesn't have any artists of its own, Carnegie Hall simply doesn't have that capability.

The NYO-USA also allows young American classical players a way to experience the magic of being associated with Carnegie Hall, even — and maybe even especially if — they don't become professional musicians. (As Gillinson noted to Midgette, his guess would be that anywhere from 30 to 50 percent of these participants will go on to other careers; that sounds like an entirely reasonable estimate to me.) In fact, one could say that NYO-USA might even tilt towards players on other career tracks: One of the stipulations of eligibility is that applicants can't be full-time conservatory students.

And whether they come from Maine, Florida or South Dakota, these musicians, and by natural extension their families and communities, are now wrapped up in that Carnegie magic. By June 5 of last month, there were more than 100 articles published in local papers and websites across the country about members of the first NYO-USA roster. That's dozens of different media outlets that most likely wouldn't otherwise have reason to cover anything going on at Carnegie Hall — or probably consider much (if any) classical music at all, for that matter.

That's not to say that the NYO-USA was launched with a cold or overly calculating eye. Gillinson often speaks extremely warmly about his own experiences in the National Youth Orchestra of Great Britain in the 1960s, and how much it shaped the rest of his life. If the NYO-USA can become that kind of force in America and give young musicians an enormously positive goal, then it's all to the good. In the meantime, Carnegie Hall is getting ready to start receiving applications for the 2014 round (in which David Robertson and Gil Shaham will tour with the orchestra across the United States). In 2015 the ensemble heads to China.