Accessibility links
An American Maverick Turns The Symphony On Its Head : Deceptive Cadence Charles Ives biographer Jan Swafford traces the life of the New England insurance executive who forever transformed the American symphony. Ives's father, a Civil War bandmaster, said any harmony — however radical — was fine. "Nobody," Swafford writes, "had ever told a young composer that before."

An American Maverick Turns The Symphony On Its Head

An American Maverick Turns The Symphony On Its Head

Jan Swafford Tells The Story of Composer Charles Ives And His Wife, Harmony 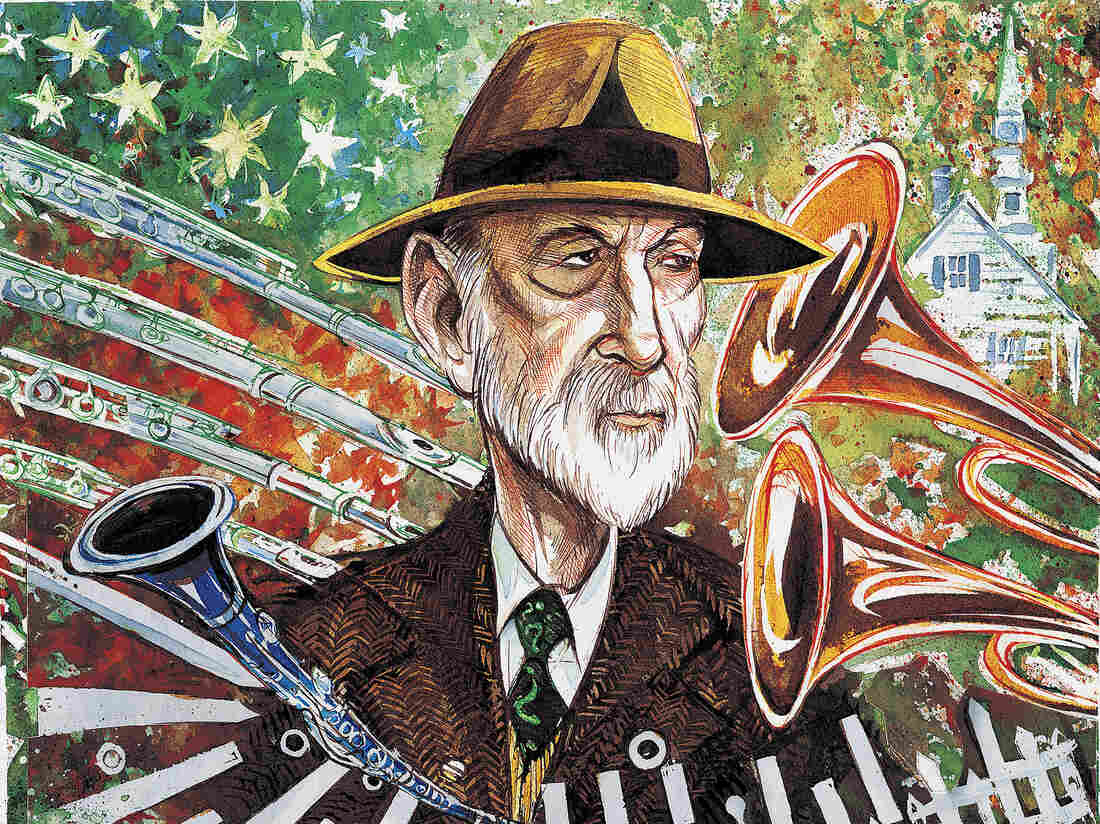 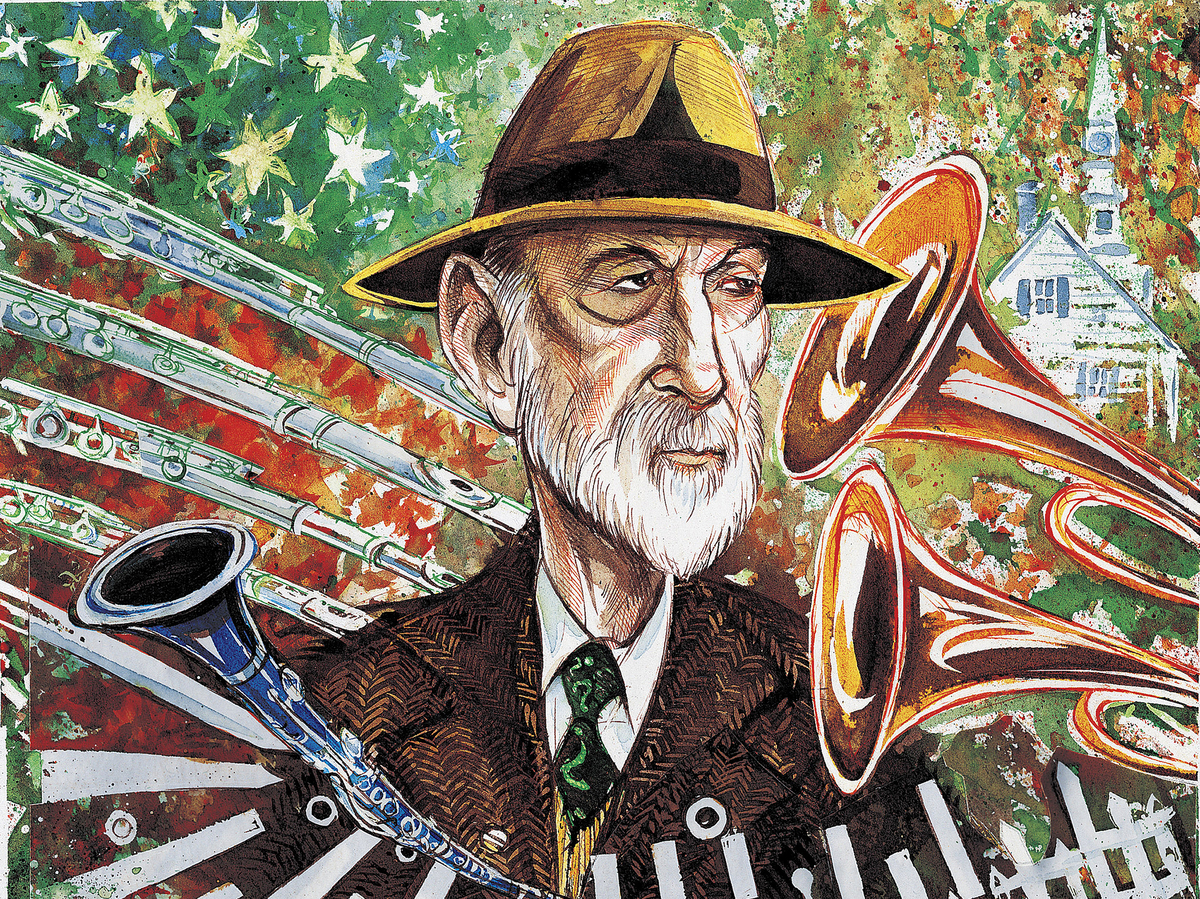 While Charles Ives was a music student at Yale in the 1890s, the question of finding an American symphonic music was coming to a boil. The celebrated Czech composer Antonin Dvorák had been brought to the U.S. mainly to teach us how to find an American voice on the concert stage. Dvorák's main answers were the New World Symphony and the suggestion that inspiration could be found in the music of black and Native Americans.

As a student Ives knew about these suggestions, but he had already embarked on his own search in that direction. From his bandmaster father in Danbury, Conn., Charlie had absorbed an experimental approach to his art. As a teenaged organ prodigy he was already writing pieces in simultaneous keys and complex rhythms far ahead of their time. At Yale parties he was celebrated for his ability to paint a football game or a fraternity initiation in wild keyboard improvisations. In the classroom none of this was allowed, but Ives's German-trained professor was meanwhile teaching his pupil how to shape symphonies and string quartets. Ives resented academe's conservatism, but in his studies he learned how to make long instrumental pieces work—one of the hardest skills on earth to master.

Why Are American Orchestras Afraid Of New Symphonies?

The American Symphonic Legacy: Not Just For White Guys

The issue of finding an American voice in classical music had heated up mainly because the country's musical life, after a century of remarkable growth, had begun to rival Europe's. There were now first-rate American symphony orchestras and opera companies and concert halls. All that was missing was a repertoire of native music to put on their programs. These institutions were founded on old-world traditions, and young American composers had begun going to Europe for their final polish.

Charles Ives had no intention of going overseas to learn to compose. He was too much his own man for that. Whatever he wrote was going to draw on his own tradition: what he had absorbed growing up as a small-town Connecticut Yankee. That included the classical tradition and no less the hymns he accompanied as a young organist, the music of brass bands that his father directed, the camp meetings and holidays full of joy and music. His father taught Charlie that any music whatever, if it was done passionately and sincerely, was a vital symbol of the human spirit. Ives grew up committed both to the classics and to the everyday music around him, and no less to the new popular style called ragtime. His father also told him that any harmony at all was acceptable if you knew what you were doing with it. Nobody had ever told a young composer that before. Ives had the genius to take up that idea and run with it.

In a way, with Ives's Second Symphony the search for an American voice in the concert hall came to rest.

When Ives composed, anything his fingers knew was grist for the mill, from a sentimental parlor song to a march to ragtime to Bach and Brahms and Beethoven to pieces in superimposed keys and tempos. And in most of his music Ives used American material as a symbol of the spirit not only of his people, but of all people. For Ives the local was universal, humanity the same in all its voices.

His First Symphony, begun as an assignment at Yale, is in the European tradition, with echoes of Brahms, Tchaikovsky, and Dvorák's New World Symphony. It's in the Second Symphony, finished around 1902, that Ives first attacked the challenge of writing a true American symphony that nonetheless belongs in the great tradition. As always, his solution was unique to him and his experience. The first movement is a somber fugue recalling Bach and Brahms. Then the second movement erupts in high-American vein with a jaunty folk tune. In its course this movement incorporates themes ranging from the hymn "Bringing in the Sheaves" to the old Dartmouth song "Where O Where are the pea-green freshmen?" At the same time, in this and other movements sudden snippets of European music—Bach, Brahms, Tchaikovsky, Dvorák — break into the texture, like echoes of the Old World heard in the New. The finale's main theme is a fiddle tune with echoes of Stephen Foster songs.

In a way, with Ives's Second Symphony the search for an American voice in the concert hall came to rest. Here and in his later work, Ives joined the voice of the American people to the great European tradition. There was only one problem: Nobody heard this epochal moment in the country's musical history, because at the time he wrote it Ives was an obscure insurance executive. The Second was finally premiered in 1951. The generations of composers who needed Ives's example never got to hear him. His Third Symphony, a small-scale work based on gospel hymns, was premiered in 1946 and won a Pulitzer Prize. But it was decades more before Ives's music showed up much on orchestral programs.

Why did it take so long? After Yale, Ives remained a part-time church organist and choirmaster for a few years, but he had realized that his music was too strong, too new, too individual to bring in any reliable income or performances. As a result, he entered business and composed for himself for the first two decades of the century. With a partner he ran what became the largest life insurance agency in the country. Only with the advent of European modernism in America in the 1920s did his more advanced music find listeners ready to cope with it. By that point Ives was an invalid, no longer able to compose and limited in his ability to promote his work. As a result, his singular music made its way into the world only slowly, the orchestral works slowest of all. In any case, for all his grounding in the past he was essentially a one-man tradition. Perhaps only in America could a major artist, known to most as a businessman, develop in such isolation. The best description of Ives's music is not Romantic or Modernist, but "Ivesian." He is the great maverick in Western musical life. But mavericks are a distinctive American breed, and we need them.

In his all-embracing way he was looking for the deepest part of our spirit.

None of the first three symphonies were an end point for Ives. None of them enfolded his most imaginative, most visionary ideas and ideals. It was with his Fourth Symphony that Ives joined a symphony to his advanced musical ideas. It is a symbolic journey through life, from high to low, childlike to exalted, simple to complex, quotidian to spiritual. Its material is a welter of American marches and hymns and ragtime and folksongs. The second movement he called the "Comedy," a tumultuous portrait of modern urban life. The third movement, symbolically set in a New England church, is a beautiful and largely traditional fugue. The finale is one of Ives's most visionary movements, a searching music seemingly made of myriad murmuring voices, its destination an old hymn: "Nearer, My God, to Thee." The end seems to evanesce into the stars, still searching.

Ives is still too much for some listeners, who cannot fathom the mixture of familiar and eccentric, the wild dissonance juxtaposed with simple harmonies, the unique sense of humor. But for me and many others Ives is the greatest American composer and the Fourth the greatest American symphony, maybe the only one that in its depth and breadth belongs on the list of the world's great symphonies. In all his serious pieces, even the most uproarious, Ives was a religious composer, pointing our gaze upward and inward, but there is nothing narrowly sectarian about him. In his all-embracing way he was looking for the deepest part of our spirit, the part that is beyond nation, race, or sect. In the modern world, alone with ourselves, he is a beacon for that condition. Everybody, Ives said, has to find his own way up the mountain. He is an eternal example of that.

Jan Swafford is the author of Charles Ives: A Life in Music, a composer and a composition teacher at Boston Conservatory.