Soundscapes In C, In Winter And In Alaska

Soundscapes In C, In Winter And In Alaska 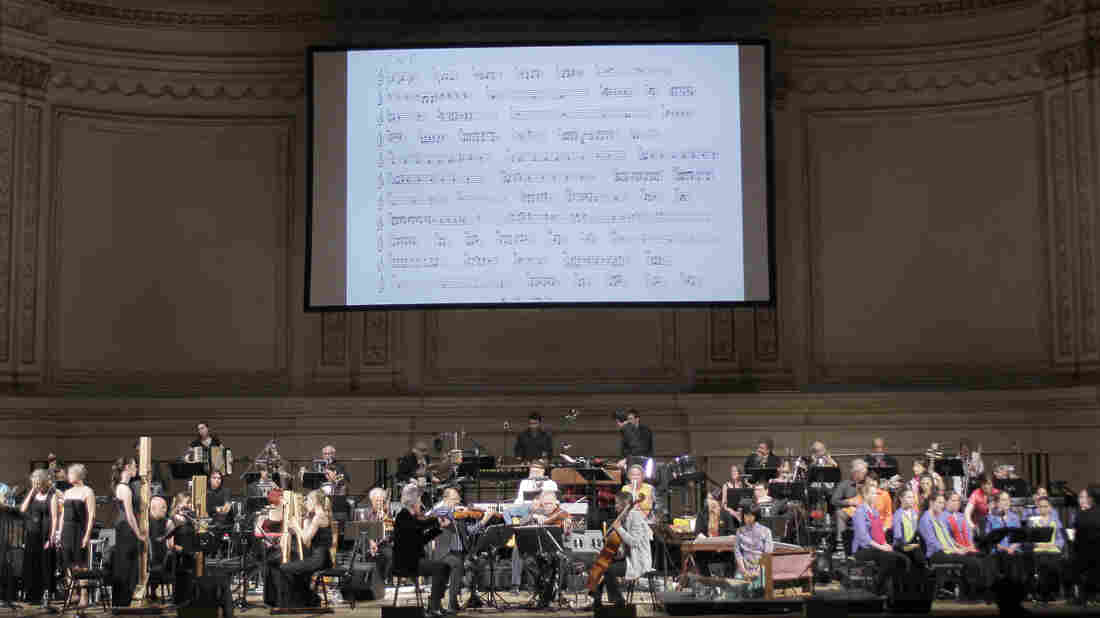 An incredible roster of musicians gathered at Carnegie Hall in 2009 to play Terry Riley's epic 'In C' — with the complete, but only single-page, score projected overhead. Julien Jourdes/courtesy of Carnegie Hall Archive hide caption 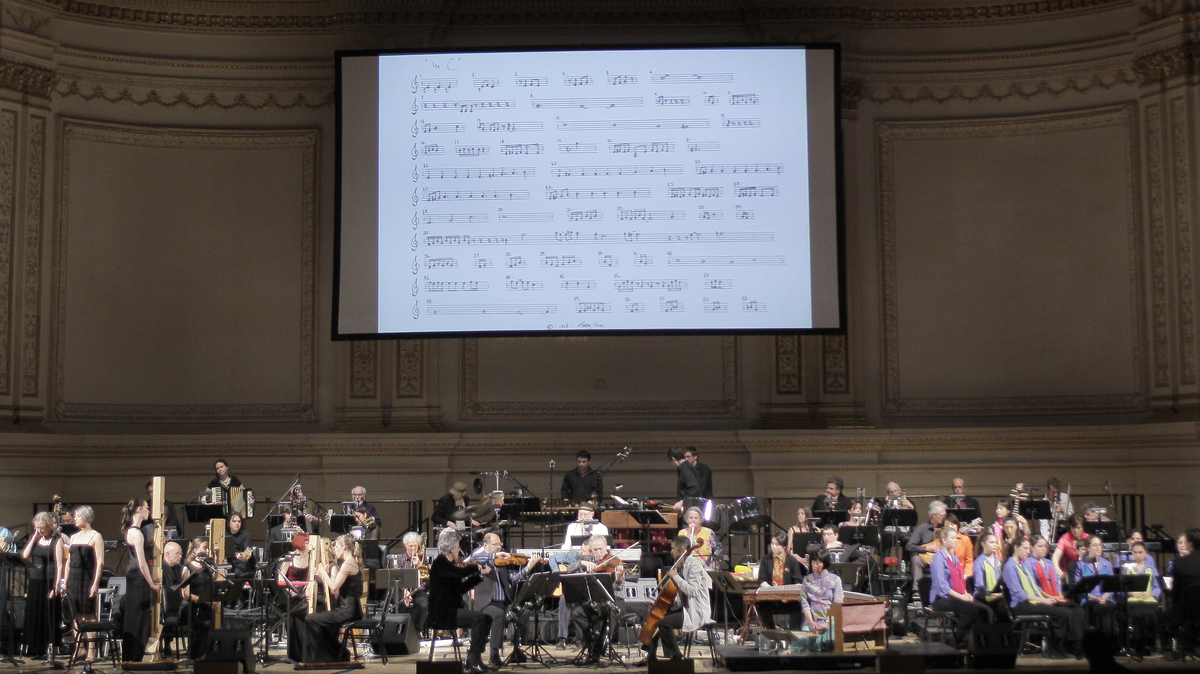 An incredible roster of musicians gathered at Carnegie Hall in 2009 to play Terry Riley's epic 'In C' — with the complete, but only single-page, score projected overhead.

For most of the summer, we at NPR Music have been chasing the Great American Symphony — through the past, present and future. We've also discussed composers creating pieces that sound like symphonies but are named something else. We've even looked at pieces called symphonies that are written for such unusual groups as a couple dozen percussionists or 100 electric guitars.

Nearly 50 years ago, West Coast composer Terry Riley created In C, the first masterpiece of musical minimalism. Though its score is a single sheet of music paper and two pages of instructions, it is a piece of symphonic sweep, heft and resonance. No two performances are the same — and its influence has been huge.

In the years since, New York composer Phil Kline and longtime Alaskan John Luther Adams have written unique, unforgettable pieces in the tradition of In C — sprawling, emotionally generous soundscapes appealing to the specialist and casual listener alike. Kline's Unsilent Night is a Yuletide boombox parade and Adams' Inuksuit is an alternately riotous and tender percussion ritual.

"In C is the ultimate Zen symphony," Kline said in an email, "going everywhere and nowhere, endless and endable, simple in a complex way, etc. Inuksuit explodes outward in all directions, like the birth of the universe, as if sound were a wild animal kept in concert hall cages and is suddenly liberated in the outdoors. Unsilent Night has a bit of both, with its asynchronous togetherness, ad lib elements and open-air freedom."

While their methods may seem unusual, Riley, Kline and Adams have fulfilled the words of a former New York Philharmonic music director, Gustav Mahler: "A symphony must be like the world. It must contain everything."

What would Mahler — an incredibly precise orchestrator — have made of In C? The second sentence of Riley's performance instructions is: "Any number of any kind of instruments can play." And they do. This 25th anniversary performance from Ireland includes Riley himself singing in a web of acoustic and electric instruments played by members of the Kronos Quartet and clarinetist Evan Ziporyn.

The musical fabric is made up of 53 fragments — busy rhythmic figures, chant-like lines, single long or short notes — sounded by the ensemble in strict tempo and order. The glorious hive effect comes from each performer moving through the music at his or her own pace, never getting too far ahead or behind, sometimes doubling the length of the fragment by playing it half as fast. A high C pings repeatedly throughout on a piano or percussion instrument.

Performances can range from about 45 minutes to more than double that. This is uniquely American music, blending elements of East and West, classical, jazz and rock in a boisterous but orderly celebration of music itself; a memorable 2009 performance at Carnegie Hall boasted 60-plus artists whose ranks included jazz trumpeter Dave Douglas, classical Indian vocalist Ustad Mashkoor Ali Khan and composers Philip Glass, Osvaldo Golijov and Morton Subotnick as well as Riley himself.

For the past two decades, in the weeks before Christmas, New Yorkers have been treated to an odd sonic treat — dozens of people strolling with boomboxes through Greenwich Village, filling streets and alleys with pealing bell sounds.

Like In C, Unsilent Night is all-embracing and always different. "In form it's probably more conventional, in eight sections, with a hint of narrative," Kline says of his piece. "It's about winter, yes, Christmas, yes, but ultimately, 'How do we get from the West Side to the East?' It's kind of a party tape in the form of a symphony."

Unsilent Night is an electronic music composition rendered in four discrete tracks. Each person has a cassette, CD or mp3 player loaded with one of the tracks. After the volunteers gather — all stagings are free, open and non-profit — the leader counts to 3 and everyone pushes play. The sound blooms like a giant music box coming to life and the procession through the city begins.

Over the course of 45 minutes, chiming and chants bounce off walls and windows transforming the coldest urban area with the warmth of musical fellowship. Walking in Unsilent Night is as close as a non-musician can get to the experience of playing in a large ensemble such as a symphony orchestra. For information about participating in or organizing an Unsilent Night performance, click here.

Adams, 60, was born in Mississippi and has spent more than half his life in Alaska. His extremely evocative music explores the water, wilderness and people of his adoptive home.

"Inuksuit" (ee-NOOK-soo-eet) is the plural of inuksuk or inukshuk, an Inuit stone sculpture that served as the logo of the 2010 Vancouver Winter Games. Inuksuit ("...to act in the capacity of the human") is a 2009 work for nine to 99 percussionists spread out over a substantial outdoor or indoor space.

"While I worked on this piece, I had in mind — as we all do these days — the melting of the polar ice and the rising of the seas," Adams told the audience at the U.S. premiere, at Furman University in South Carolina in 2010. "And the work is kind of haunted by the question of the image of what may remain of our human presence after the waters recede."

Over the course of 75 to 90 minutes the percussionists move slowly from sounds of breathing and wind, to thundering drums and the keening of sirens and blown conch shells, to triangles and bells that mimic bird song. As with In C, each player performs each musical fragment at his or her own speed; as in Unsilent Night, listeners are allowed to wander through the sound.

In videos made for the players in a 2011 Inuksuit performance at the Park Avenue Armory in New York, percussionist Doug Perkins explains how the piece is put together — including musical figures written to look on the page and sound like inuksuit. Perkins is also the leader and producer of a CD/DVD package being released Oct. 29 on Cantaloupe Records. Here's a preview:

Inuksuit will be performed Sunday at the Greentopia Festival in Rochester, N.Y. The same day, Philadelphia choir The Crossing presents the American premiere of Adams' Canticles of the Holy Wind.