Accessibility links
Get To Know Ned Rorem, Now That He's 90 : Deceptive Cadence Composer Ned Rorem turns 90 today. Why isn't there more celebrating? In the meantime, here's an introduction to this essential, brilliant and more than occasionally irascible American artist. 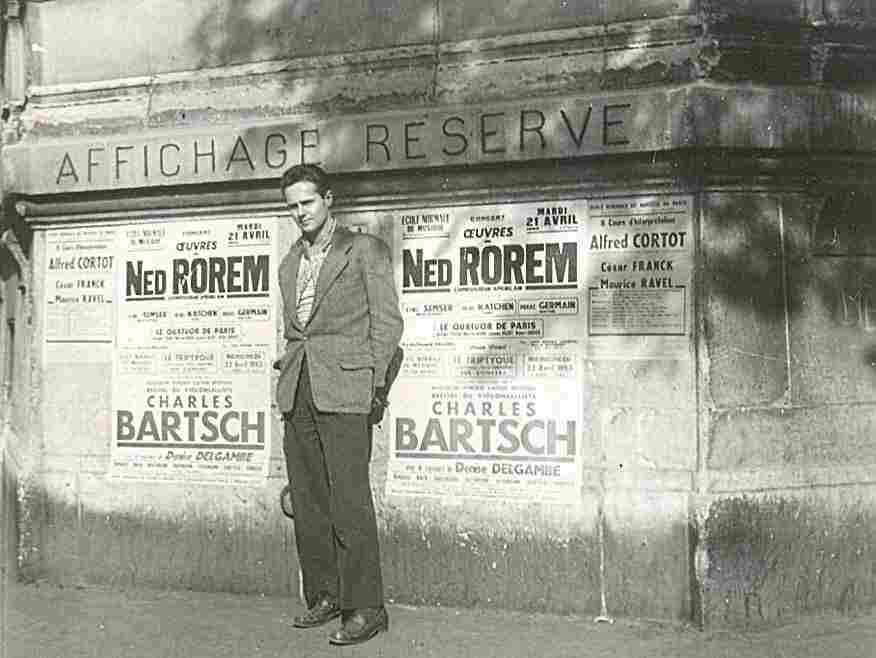 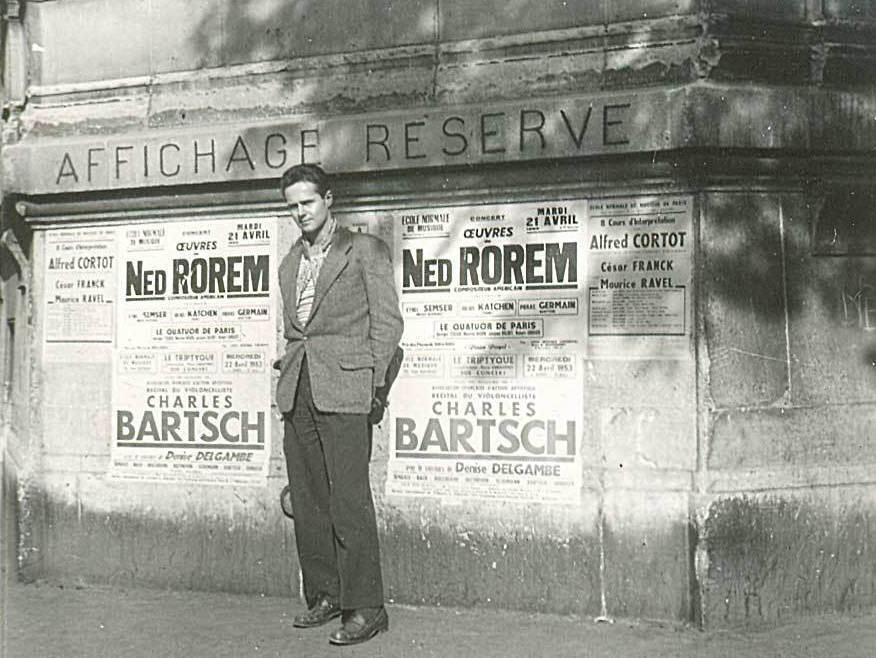 Composer Ned Rorem in 1953 in Paris, where he lived for nearly a decade and wrote his infamous Paris Diary.

Today is composer and author Ned Rorem's birthday — his 90th, as it happens. It's an occasion that would be pretty easy to miss: Aside from some special concerts sprinkled here and there and precious few places elsewhere around the country this autumn, performers haven't been racing to organize grand affairs.

But that's a loss. Rorem's quick wit, deadpan humor and often lacerating opinions — made especially notorious by the 16 volumes of diaries and essays he has published from the early 1950s onward — are offset by the deeply lyrical and unabashedly emotional music he writes, including the 500-plus gorgeous and often affecting songs he has composed. There are also 10 operas, three symphonies and scads of other works of all scales and scopes. Among his massive trove of accolades is the Pulitzer Prize, which he won in 1976 for his orchestral suite Air Music.

If you're new to Rorem, there are many wonderful points of entry, like this grouping of five of his songs, performed by the exemplary mezzo Susan Graham, a longtime Rorem champion. Frankly, it's incomprehensible why any American singer wouldn't have a smattering of Rorem's songs in his or her repertoire:

As Rorem has himself observed, however, this Richmond, Ind.-born artist raised in Chicago is far more famous in certain circles for his prose, which he has called his "parallel life." The earliest volumes of his diaries, as he put it to the Paris Review in 1999, were "filled with drunkenness, sex, and the talk of my betters." And as he said in the same interview of his double life:

Nine out of ten people who played my music hadn't the faintest idea I wrote books and certainly the people reading the diaries didn't know my music. I could tell from the letters I received. Even today, letters about music I get from strangers are all about a possible error, say, in measure thirty-four, whereas the letters about the diaries are invariably much more emotional. But then literary people — or most of them — know little about music.

If you're ready to explore more of Rorem's artistically expansive universe, check out the wonderful hour-long interview WNYC's Sarah Fishko did with Ned Rorem back in 2002, just on the cusp of his ninth decade. Over the course of their time together, Rorem looks back his life up until them with a gimlet eye, assessing everything from the aftereffect of winning the Pulitzer: "[Air Music] gets done never ... if I die in a whorehouse, [my obituary] will still say, 'Pulitzer Prize winner, Ned Rorem.'"

In the same interview, he recalls his experiences traveling as a preadolescent to Wabash Avenue, one of Chicago's black neighborhoods, to take piano lessons with his beloved teacher — who introduced him to the music of Stravinsky, Ravel and Debussy, as well as Chicago composer John Alden Carpenter. Rorem also revisits his 1968 lauding of The Beatles, in an essay written for The New York Review of Books, in which he compares the Liverpool lads to Monteverdi and Schubert. Not incidentally, and with typical steely verve, Rorem includes this pointed criticism of his own community: "I never go to classical concerts any more and I don't know anyone who does. It's hard still to care whether some virtuoso tonight will perform [Beethoven's] Moonlight Sonata a bit better or a bit worse than another virtuoso performed it last night."

So, on this birthday, a wish: Here's to Rorem's next chapter, with hopes that both his music and words get more properly feted in the decade to come.