Accessibility links
Making Music To Be Useful, And For The Living : Deceptive Cadence Born Nov. 22, 1913, Benjamin Britten went on to become one of the greatest composers of the 20th century, one whose work managed to push boundaries while still remaining tonal. The centennial of his birth is being marked by concerts around the world and a massive reissue of his recorded works. 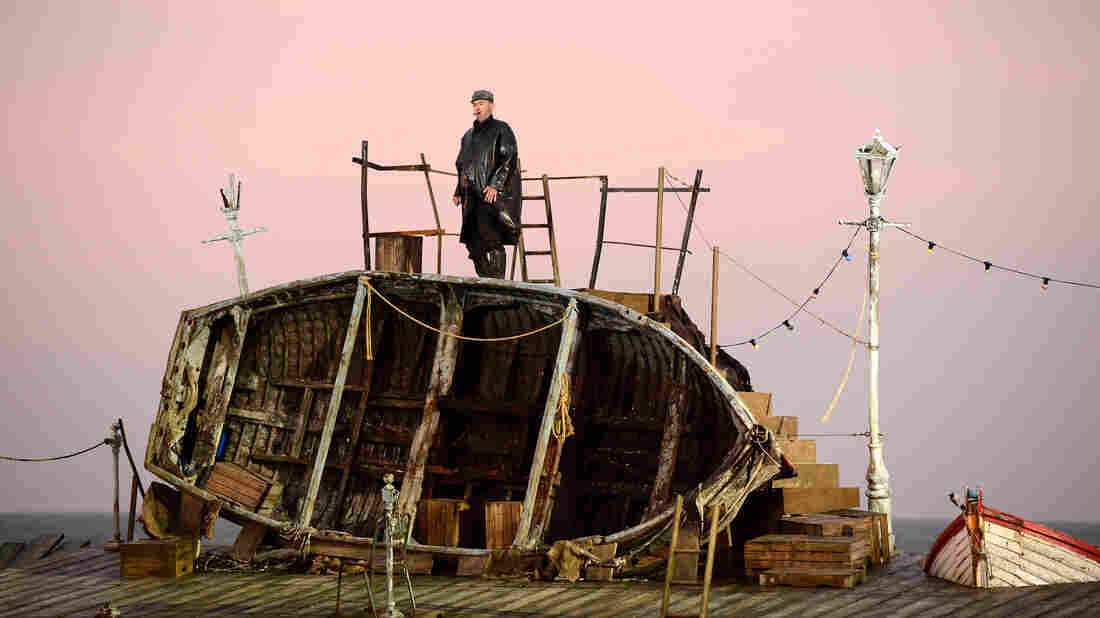 A singer takes the stage during the first performance of "Grimes on the Beach," an outdoor production of Benjamin Britten's opera Peter Grimes, on June 17, 2013 in Aldeburgh, England. Bethany Clarke/Getty Images hide caption 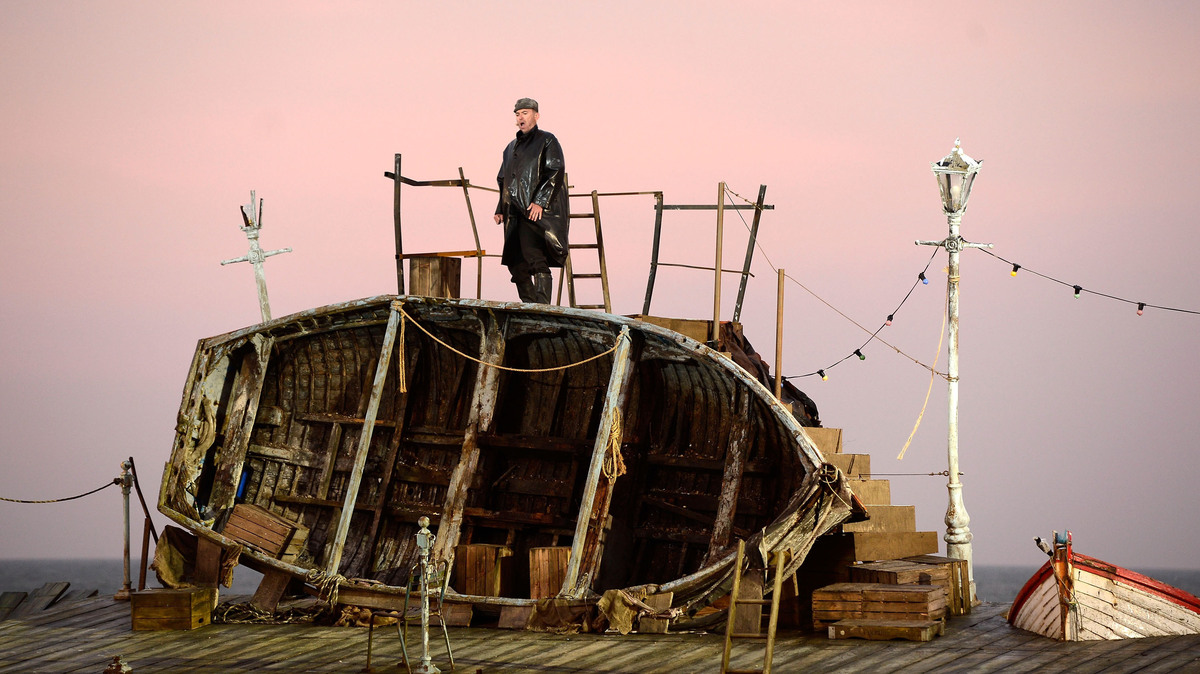 A singer takes the stage during the first performance of "Grimes on the Beach," an outdoor production of Benjamin Britten's opera Peter Grimes, on June 17, 2013 in Aldeburgh, England.

Composer Benjamin Britten was born 100 years ago today, and the occasion is being marked by performances of his music around the world, from Carnegie Hall in New York to Memorial Hall in Tokyo.

Britten was a central figure of 20th-century classical music: He was a conductor, pianist and festival producer, as well as a composer. His best-known works include the opera Billy Budd, his War Requiem and The Young Person's Guide to the Orchestra.

Britten skyrocketed to fame after the premiere of his 1945 opera, Peter Grimes. It's the story of a fisherman and a dreamer.

Anthony Tommasini, chief music critic for the New York Times, says Britten caused a sensation with the piece by combining conventional harmonies with a modern twist; the title character is an outcast who lives in the shadow of unfounded allegations.

"It was so psychologically raw and terrifying," Tommasini says. "The ambiguity of it is very modern."

Peter Grimes contains themes Britten would revisit throughout his career: characters fighting injustice, mourning the loss of innocence and struggling with the sea.

The opera is set in Suffolk, on England's eastern coast, where Edward Benjamin Britten was born on Nov. 22, 1913. Britten was a prodigy who began writing music at the age of 5. By the time he was 14, he had composed hundreds of pieces of music, some of which he reworked as a 20-year-old into his Simple Symphony.

Consumed By Violence, With Hope For Peace: Britten's 'War Requiem'

In a BBC interview included in a 1979 documentary, Britten said his childhood had a deep impact on his music. A middle-class family and strict boarding schools led to a work ethic that was more about perspiration than inspiration.

"I like working to an exact timetable," Britten said in the interview. "I often thank my stars that I had a conventional upbringing and I went to a school where one was made to work."

Britten attended the Royal College of Music, then took his workmanlike approach to the BBC, where he was hired to compose scores for theater and films, including the 1935 travelogue The Way to the Sea.

"He did not think that this was just grunt work that he was doing until he got his chance to write his great symphonies or whatever," Tommasini says. "He thought it was intensely valuable and interesting work. And by the way, it helped him when he started writing operas because it really taught him how to write dramatic music."

Britten wrote many of his acclaimed vocal works — including the operas Peter Grimes and Billy Budd — for tenor Peter Pears. He and Pears met in 1937 and became lifelong partners in their professional and personal lives, as Pears, who died in 1986, said in the documentary A Time There Was.

"He was absolutely devoted to me and unbelievably good and kind," Pears said. "It was a quite marvelous relationship and I'm incredibly grateful for it, apart from the fact he really made me. He wrote marvelous songs for me which I could sing to his satisfaction."

Nicholas Phan, 34, is a rising star in the opera world as a tenor. He acknowledges the importance of the relationship between Britten and Pears.

"It's pretty clear that these two people inspired some of the most beautiful creations of the last century," Phan says. "And the idea that a relationship could spawn such creativity is really inspiring to me."

Watch: 'Britten Goes Back To Brooklyn With Nicholas Phan'

Phan has chosen to devote his first two albums to Britten's music. The latest includes a rendition of Canticle III, Still falls the rain, Britten's setting of a poem about the bombing of London in 1940.

"Britten has this magical combination of head and heart," Phan says. "You see it in certain composers like Mozart, the true geniuses, but it's very rare. And he always has this extremely strong emotional core to his music and his pieces that is very dramatic and very powerful."

Britten was a pacifist and conscientious objector during World War II. In 1945, he played for concentration camp survivors, and said the horror of what he saw at Bergen-Belsen influenced everything he wrote after, including one of his greatest works, the War Requiem.

Britten was also deeply interested in encouraging the next generation. "What matters to us now is that people want to use our music," he told the BBC. "For that, as I see it, is our job: To be useful, and to the living."

Britten died of heart failure on Dec. 4, 1976, in Peter Pears' arms at their home in Aldeburgh on the English coast. He was 63 years old.