Accessibility links
The Sound of Struggle Tempered With Terror: Penderecki At 80 : Deceptive Cadence If you simplified the last 100 years of music as a war between atonal and lyrical forces, Penderecki would be on the front lines of battle. Discover the great Polish composer's haunting, viscerally dramatic music in a Penderecki primer. 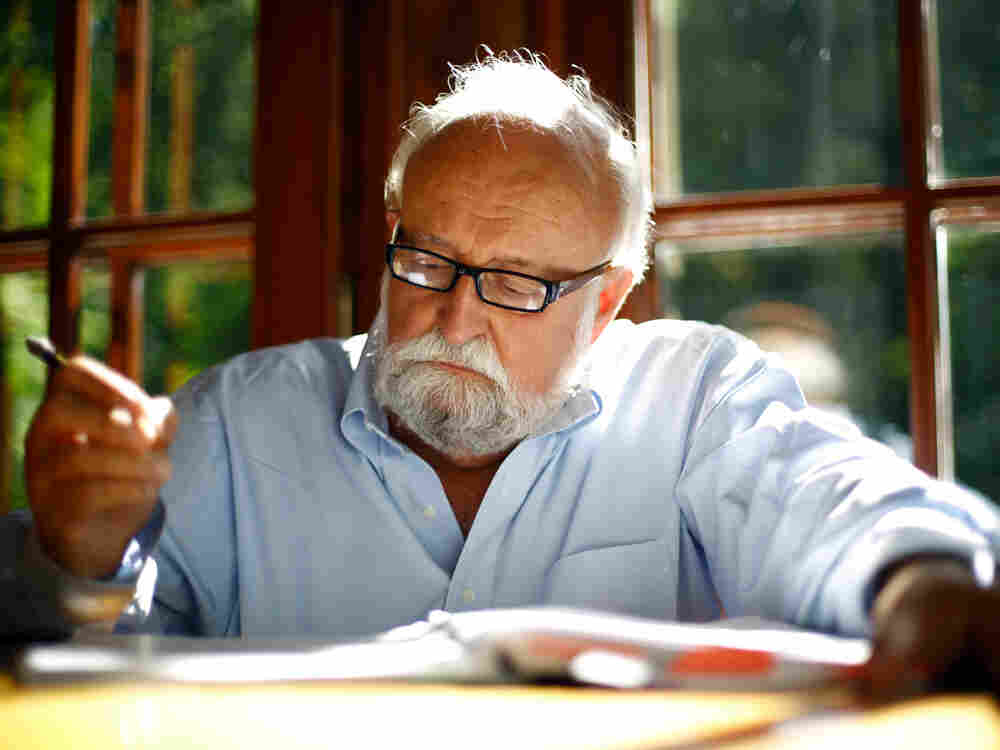 In Penderecki's music there is a struggle between melody and dissonance. Bruno Fidrych hide caption 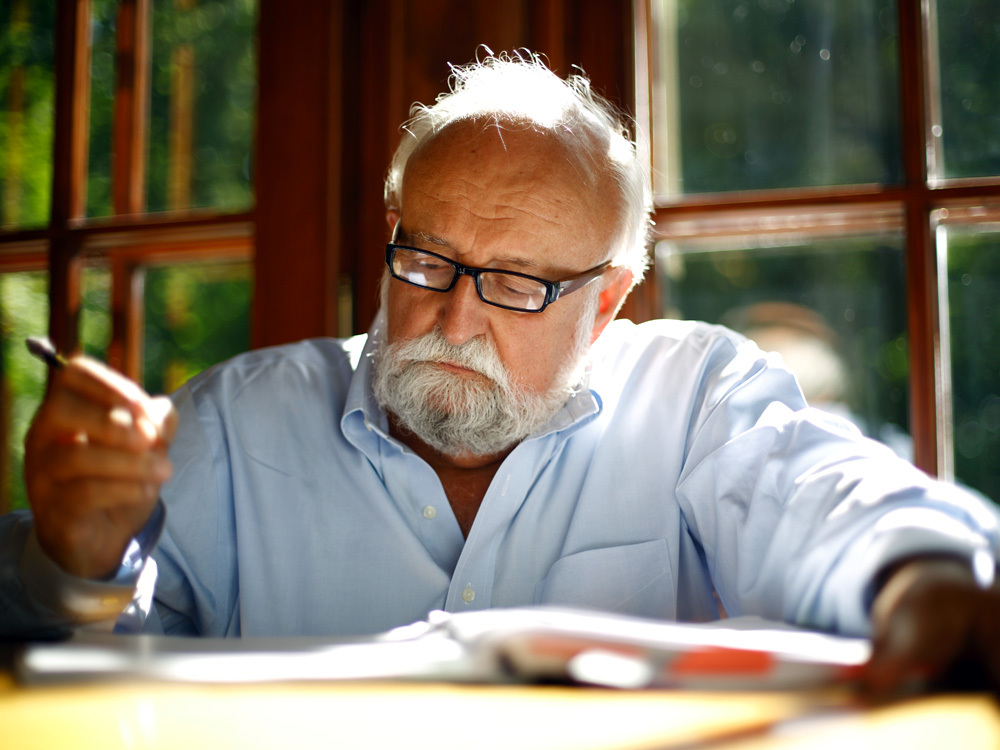 In Penderecki's music there is a struggle between melody and dissonance.

There's a beguiling photo of Krzysztof Penderecki, who turns 80 today, inside the brochure of this week's Warsaw music festival that bears his name. It shows the lauded Polish composer standing in his immense garden, surrounded by a labyrinth of trees and shrubbery trimmed to symmetrical perfection.

In a way, it's emblematic of Penderecki's music: naturally vibrant, sensual and with a very personal sense of architecture.

If you simplified the last 100 years of music as a war between the forces of the atonal and the lyrical, Penderecki would be on the front lines of battle. He found fame, around 1960, as a forward-thinking avant-gardist, but later defected to the other side, looking back at the Romantics and even Bach for inspiration.

A Sound Of Fear, Forged In The Shadow Of War

But that doesn't mean Penderecki's music adopted the rhapsodic sweep of someone like Rachmaninov. Much of his music is not for the faint of heart. With its viscerally intense drama (even in his non-stage works), this music occupies a sound world that can often be described as terrifying. Perhaps that's why Stanley Kubrick used so much of Penderecki's music to accent the horror in The Shining, the 1980 thriller that gave many listeners their first taste of the Polish master (even if they didn't know it at the time).

Whether you are a first-timer or a fanatic, here is a modest Penderecki primer. For those in the know, it's a chance to revisit some of the most extraordinarily passionate music of the last century. If you've never heard a note, open your ears — and hold on to your hat. 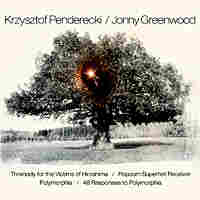 Penderecki: Threnody for the Victims of Hiroshima

Threnody for the Victims of Hiroshima (excerpt)

Penderecki might officially be an octogenarian, but a significantly younger generation has found a portal to his music via Radiohead guitarist Jonny Greenwood who, as an unabashed fan, released a record last year with the composer. Greenwood's own orchestral music (especially for the film There Will Be Blood, with its jagged tone clusters) is respectfully derived from such Penderecki classics as Threnody for Victims of Hiroshima, the composer's best-known work. This 1960 shocker spotlights Penderecki's penchant for forcing instruments beyond their limits, in this case with slithering — and somehow sensual — string textures and unsettling microtones. It's enough to make one both woozy and frightened. Although the title says Hiroshima, Penderecki said he had "the destruction of the ghetto in my small native town of Debiça" in the back of his mind. 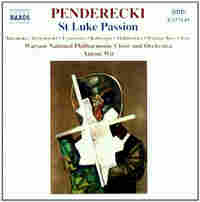 The St. Luke Passion, completed in 1966, was a breakthrough piece for Penderecki, proving he was much more than a trendy avant-gardist. With a large orchestra, full choir, boys choir, narrator and vocal soloists, it's no surprise the 80-minute work sounds massive — but it also manages to be intimate. It was also a major religious statement at a time when, under Soviet rule, the church was officially frowned upon. The music is evocative, dramatic and reaches an expressive high point, just before the Crucifixion, at "Popule meus" (My People), where Penderecki's choral palette is perhaps at its richest, employing slides, clusters and microtones similar to those in Threnody. 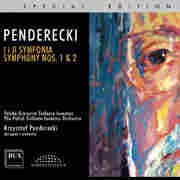 With his Second Symphony, begun on Christmas Eve 1979 and sporting ghostly wisps of "Silent Night," Penderecki turned a corner, bidding farewell (mostly) to his avant-garde past. Yet even with its post-Romantic leanings, this single-movement, symmetrically built symphony is far from cheerful. Ashen clouds seem to hover, occasionally breaking apart in startling bursts of violence, beautifully realized in Penderecki's virtuosic command of the orchestra. Late in this excerpt, after a Shostakovich-like eruption, unsettling softer passages and a glorious new theme spearheaded by brass, listen for a vaporous trace of the Christmas carol before it evaporates into the murky beyond. Merry Christmas. 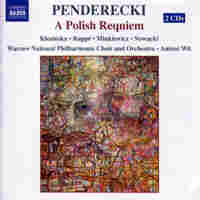 In his music, Penderecki has approached politics, religion, social injustice and the plight of the common man, both in general terms and by considering specific individuals and events. In 1980, after years of violent government crackdowns on labor protests, the trade union Solidarity was born in Poland. That year, Penderecki composed a Lacrimosa for the unveiling of a memorial in Gdansk, dedicated to those killed in the 1970 shipyard riots. Contemplative, unabashedly beautiful and heartbreaking, the 5-minute piece for soprano, orchestra and chorus later became part of another major work, the Polish Requiem, which contained music in tribute to Cardinal Wyszyński and Father Kolbe (who gave his life for another in Auschwitz). The emotional halo hovering over the 100-minute Requiem is Penderecki's use of the old Polish hymn "Święty Boże" (Holy God). 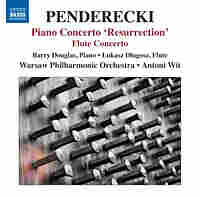 The final section of the 37-minute Piano Concerto, subtitled "Resurrection," contains one of my favorite Penderecki dichotomies. After a stretch of rather straightforwardly wistful, post-Romantic dialogue between the pianist and various sections of the orchestra, there's a sleight-of-hand crossfade into an innocent melody, almost childlike, dressed in warm strings and tinkling percussion — perhaps the most delicate and pretty music Penderecki has ever composed. But wait: A series of orchestral whiplashes ensues, building in brutality until a standard Romantic pounding closes everything down. This is another piece that took some years to mature. Penderecki completed a version in 2002, but revised it significantly for a Cincinnati re-premiere in 2007.