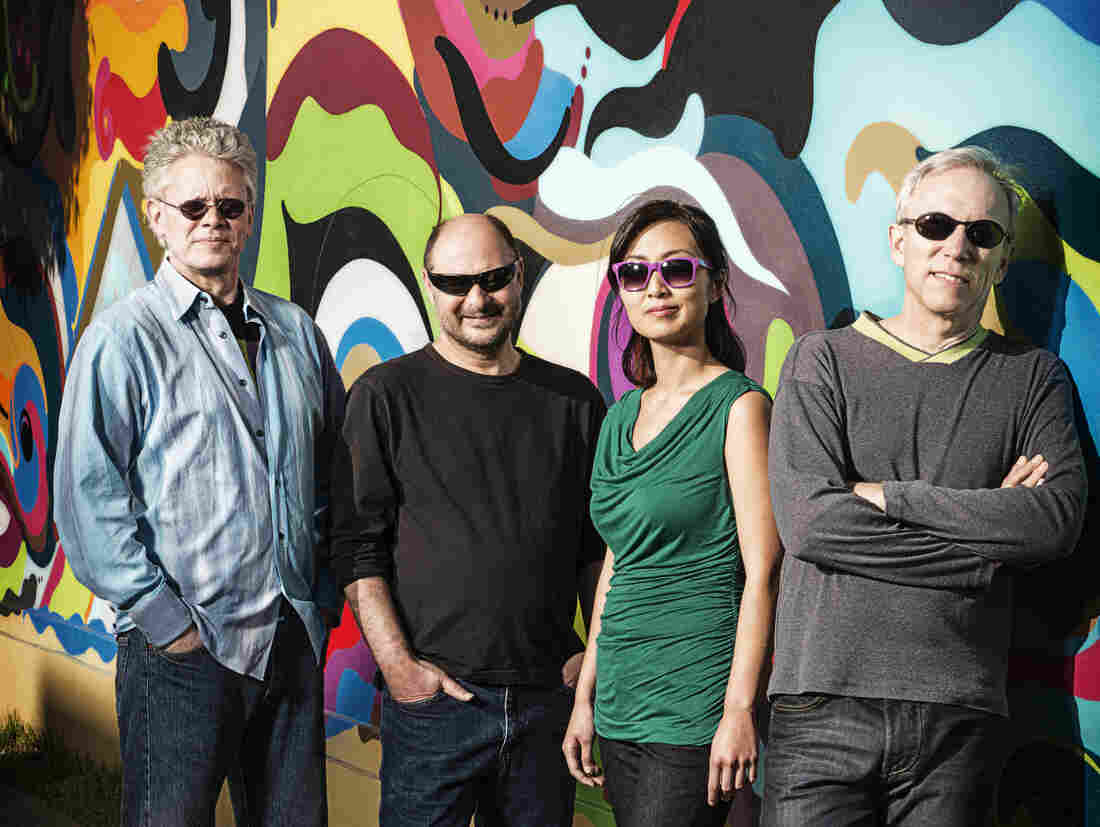 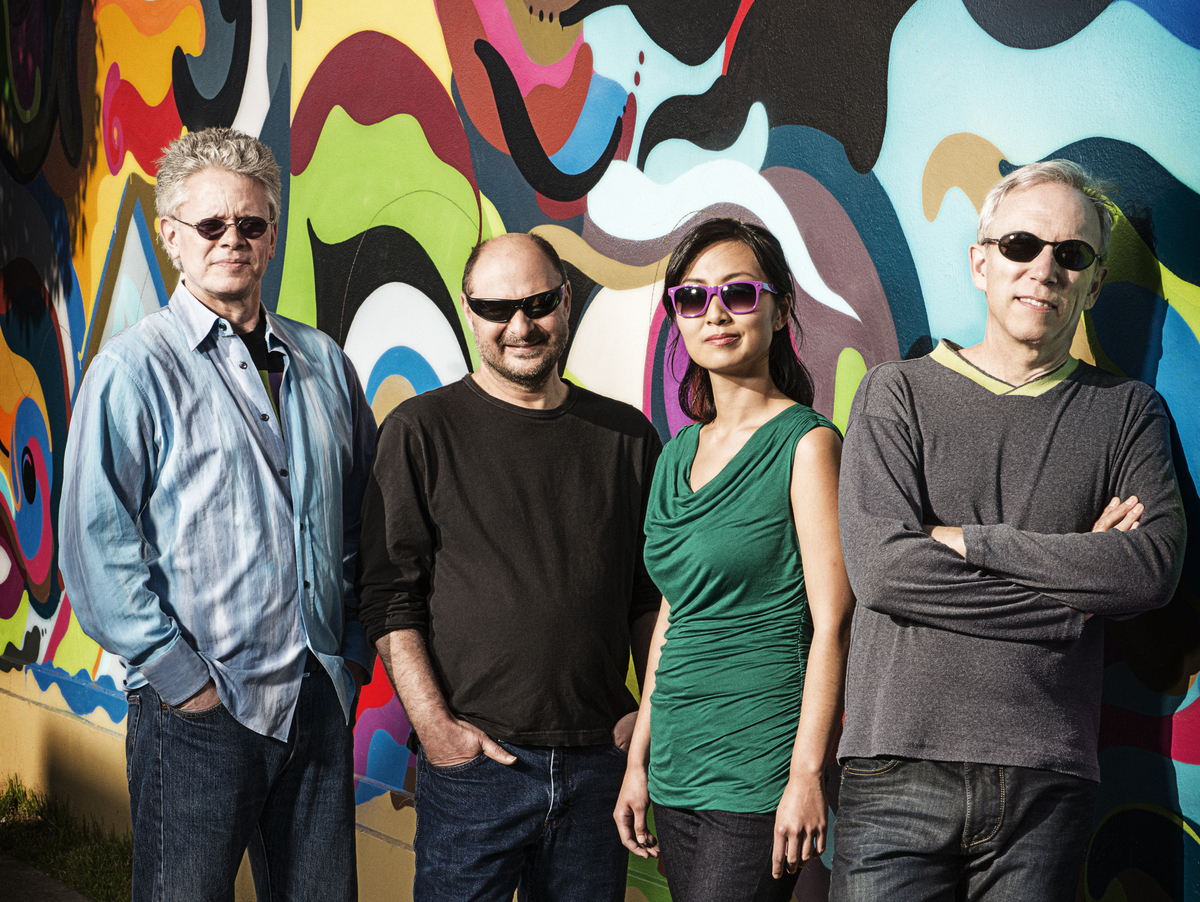 Jay Blakesberg/Courtesy of the artists

Kronos Quartet is celebrating 40 years of playing music together — and to mark the occasion, they're playing a celebration concert at Carnegie Hall in New York tomorrow night. Since their founding, the San Francisco-based string quartet has become one of the most visible ensembles in classical music. The players have done it by championing new and underheard music, and by coming up with a business model that was unheard of for a chamber group four decades ago.

Violinist David Harrington dreamed up the idea of a string quartet devoted primarily to contemporary music in 1973. Since then, he and his fellow musicians have commissioned and premiered new works by some of the most important composers of our time, including John Adams, Steve Reich and Phillip Glass. Violinist John Sherba, who came onboard in 1978, says the pace has been breathtaking: more than 800 brand-new works or arrangements from composers from all over the world. That's meant learning an often complex new piece every two weeks for some 40 years.

"Every time we bring a new work, a new composition, into our rehearsal and then ultimately into a performance," Sherba says, "it's so fresh, it's a little bit like climbing a new mountain, you know. The challenges are there: Can we play it in tune? Can we play it together? Can we kind of get music out of the piece?"

They've developed very deep ties with composers they've known for almost half a century. Violist Hank Dutt has been with Kronos since 1977. "We've played many composers' works, and so there's a relationship going on," Dutt says. "And a lot of times, those composers recognize the strengths of each of us individually, and can write for that, which is terrific. But there's also the great thing about our work is that we always work with a composer."

Speaking from his home in the foothills of California's Sierra Nevada, 78-year-old composer Terry Riley, one of the fathers of minimalism, says each member of the group brings a specific personality to whatever they play: "I definitely was aware of the differences in playing between different members of Kronos. You know, if I want something really warm, I'll usually go to Hank's viola, which is I think the warmest viola sound. If I have a highly technical passage, I might give it to John, the violinist. And if I have something that is like a screaming rock-type passage, I'll give it to David."

Riley also says that their bonds proved a ripe ground for experimentation and finding new paths to communicating his ideas. "Especially early on, I was trying to create a kind of improvisational form for Kronos," Riley recalls, "and the first pieces I showed to them would have involved a lot of improvisational skills. And David told me from the beginning, 'You know, we do best when we have everything written out, details written out, and then polish those details.' And so what I realized is that the improvisational feeling in the music would kind of have to be written into it, the kind of interaction that might happen between like, say, north Indian classical musicians onstage when they tossing ideas back and forth in kind of a playful manner." His Serquent Risadome will have its world premiere at the Carnegie Hall concert tomorrow night.

Kronos has also launched the careers of younger composers, and often nudged their work in new directions. Serbian composer Aleksandra Vrebalov, 43, began corresponding with the group when she was in her 20s. Even though she was just an undergrad at San Francisco Conservatory when she first contacted them, they were very encouraging.

"We really love the first quartet that you wrote," she says the quartet told her, "and we are very curious to see what are the next pieces you are going to write. So whatever you write, just send it to us."

"And that was the beginning," Vrebalov says, "because I did send scores that were not even for string quartet, just whatever I would write. And then three years later, they commissioned the first piece."

Vrebalov says Harrington and the other members of Kronos encouraged her to tackle themes that she wouldn't have touched on her own, especially using instruments and ideas from her native country.

"Those were the '90s, and the '90s were extremely difficult for that part of the world," she says. "So a big element in that war, an extremely negative element, was nationalism, and how it was used in those years in the '90s, in Serbia and Croatia, to promote values that were just so narrow and not good at all for that time when it was happening."

Kronos encouraged her to subvert that approach. In her piece ...hold me, neighbor, in this storm... she used Serbian folk instruments, church bells and even the sound of her own grandmother's voice singing a traditional song.

Vrebalov has had many works premiered by Kronos, including her piece Bubbles, which the quartet will perform with the Brooklyn Youth Chorus at the Carnegie Hall concert, as well as a collaboration with video artist Bill Morrison and Kronos about World War I that will premiere at Cal Performances in Berkeley, Calif., next month.

The quartet's influence even extends to its own members. Cellist Sunny Yang, 28, joined Kronos last June. She says long before she ever imagined being a member, she heard them play.

"I first saw them live I think my last year of high school," Yang says. "I was studying at Interlochen Arts Academy. And I remember I sat in one of the first rows, and I couldn't close my mouth! They really made a big impression on me!"

Kronos Quartet has made an impression on musicians and composers for more than its musical sensibilities. Its business structure created a new paradigm for younger groups to follow. Janet Cowperthwaite was a senior in college when she was hired to help out with their office work. She is now their managing director, and oversees a staff of eleven that serves the quartet as well as a nonprofit organization called the Kronos Performing Arts Association.

"All of us are employed by the organization, including the members of Kronos," Cowperthwaite says. "The nonprofit part is about raising money for commissions, mainly, and for other programs. I mean, we've commissioned I think it's up to 831 new works and arrangements for quartet since the quartet was founded. So that kind of output requires a lot of fundraising. There wasn't really a model for that, or if there was a model, we weren't aware of it!"

"A lot of younger groups now have seen the model that Kronos has built and have emulated it, which is something that is very gratifying for us," she continues. "Along the way, I've talked to colleagues at eighth blackbird, Alarm Will Sound, Bang on a Can, the Sō Percussion group. It really makes us feel good to see other groups learning from what we've done."

But what makes them feel great, according to Harrington, is looking to the future — new music in hand. "It feels like a launching point into the future," he says. "It's taken 40 years to be able to get to where we're at right now, and I want to use every day to propel our music forward and further and wider and louder and softer, and every way it can possibly go."

And at this rate, Kronos will click by 1000 commissions by their 50th anniversary.