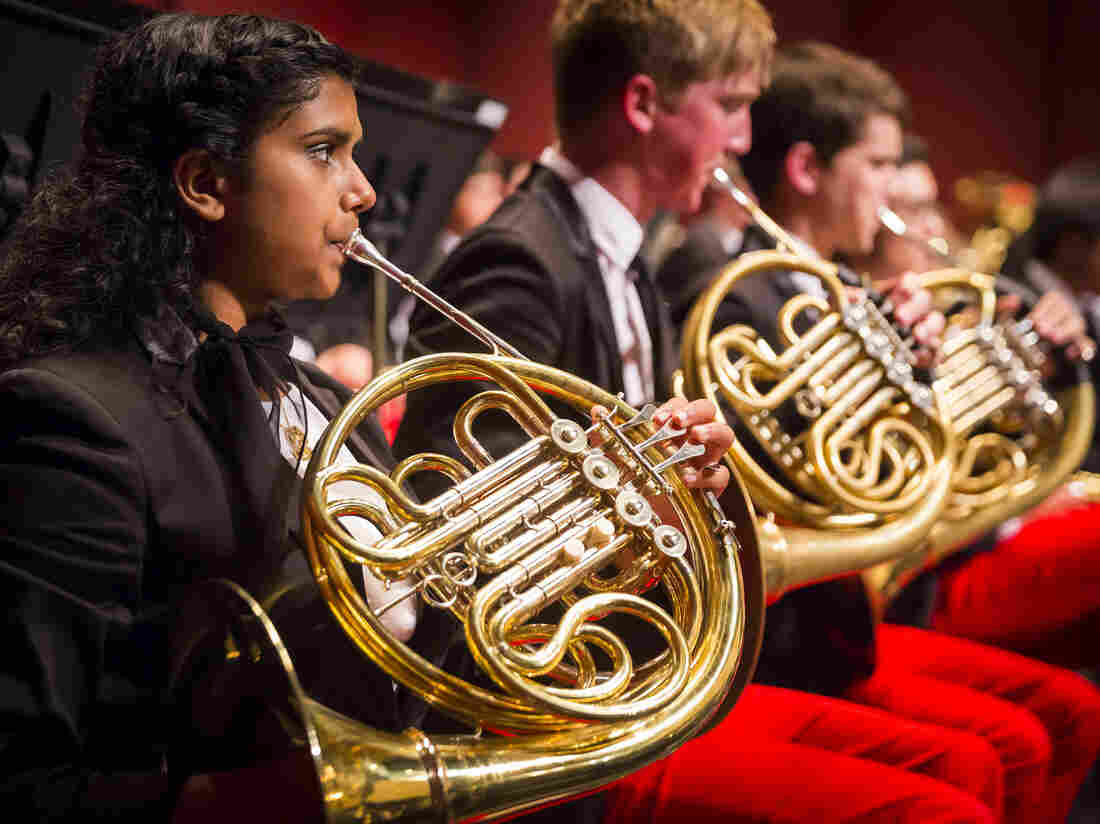 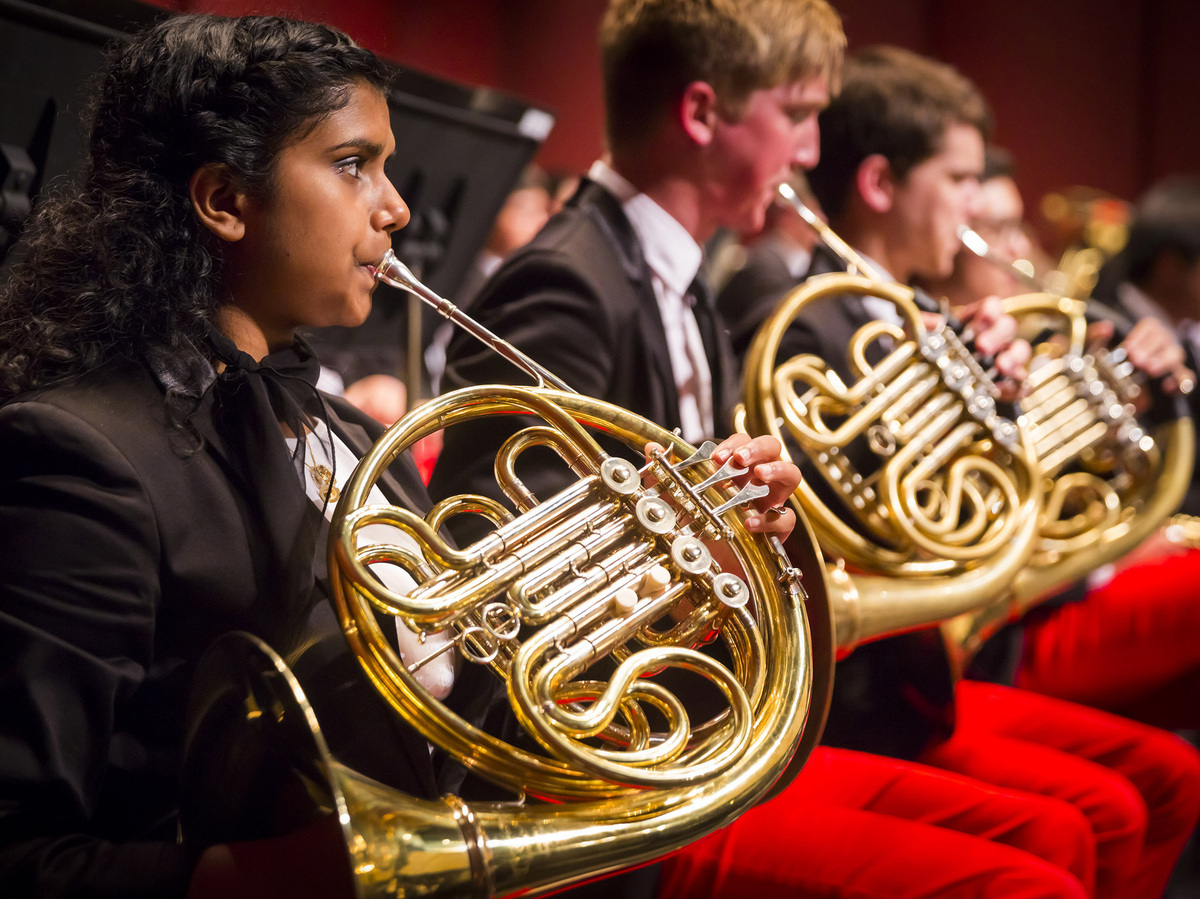 The French horns of the National Youth Orchestra of the USA — a yearly summer project organized by Carnegie Hall — rehearsed Saturday in Purchase, N.Y., in advance of their tour around the country.

Chris Lee/Courtesy of the National Youth Orchestra of the USA

Last year, the Carnegie Hall-organized National Youth Orchestra of the USA launched amid a rush of media attention from across the country and around the world, with performances in Moscow, St. Petersburg and London. This week, a fresh crop of very talented young musicians, all between the ages of 16 and 19 and hailing from 35 states plus the District of Columbia and Puerto Rico, are hitting the ground running with a concert tonight at New York's Carnegie Hall.

Their first performance was Wednesday evening, when our friends at the NPR-distributed program From the Top taped their newest show at Purchase College. It featured four NYO-USA musicians playing Saint-Saëns and Fauré alongside host and pianist Christopher O'Riley, as well as selections from their full 2014 concert program.

I went to the 2014 orchestra's first full concert on Sunday in Purchase to hear a program that was right in the pocket of their conductor, St. Louis Symphony music director David Robertson — and showed off their youthful exuberance and considerable technical command. The concert included a sparkling new work called Radial Play by 28-year-old composer Samuel Adams (son of John Adams, whom he strongly resembles physically); Bernstein's Symphonic Dances from West Side Story; Mussorgsky's Pictures at an Exhibition; and Britten's stunning but drastically underheard Violin Concerto with soloist Gil Shaham, who made a fantastic recording of it not long ago on his Canary Classics label.

These young artists couldn't ask for a better guide in playing American music than St. Louis Symphony Music Director Robertson — who, as it happens, made one of my favorite recordings of the first half of this year, an album featuring the music of Samuel Adams' father, another thoroughly American voice on the scene.

In the Bernstein suite, Robertson teased out every last hint of swing in the score — not just in the most famous sections, but also in the gossamer-light moments the violins have in the Scherzo. The Adams piece, Radial Play, with its glittering bursts of color and texture arranged in dense skeins of counterpoint that project out of a single note, was a welcome thrust into 21st-century music, and a piece that deserves to make it onto other orchestras' programs in the seasons to come.

You can hear Radial Play now courtesy of From the Top, who recorded the NYO-USA world premiere:

Though there were occasional slips of stamina and attack in the Mussorgsky that tipped off the musicians' ages, it was a raring outing nonetheless for some greatly beloved music. But even more exhilarating was their performance of the Britten. Shaham treated them as real collaborators in this harrowing piece, which the British composer wrote as a response to the gathering clouds of war across Europe, and specifically after the bombing of the Basque town of Guernica.

Carnegie Hall has been releasing a string of videos to celebrate this year's ensemble, including a performance of the group's encore, music from Porgy and Bess: A Symphonic Picture. (And no, that's not David Robertson leading the charge, it's NYO-USA Orchestra Director James Ross.)

The 2014 players have also made a bunch of little videos showcasing their personalities — some of them sweet (like a group of cellists covering "What A Wonderful World"), many of them a little goofy (percussionists, of course). My favorite is one that a clever YouTube commenter has dubbed "gang violins" — you'll see why.

After their date at Carnegie Hall tonight, the 2014 NYO-USA players head out on tour across the United States, with stops at Tanglewood, Appalachian State University in Boone, N.C., Chicago's Grant Park Music Festival, the Grand Teton Music Festival in Wyoming, Sonoma State University in Northern California, and Walt Disney Concert Hall in Los Angeles. And for the program's 2015 participants? A tour of China with conductor Charles Dutoit and pianist Yundi.

NYO-USA on From The Top