Accessibility links
Meet The Cast Of The Met Opera's Labor Drama : Deceptive Cadence Think opera plots are tough to follow? Try wading through the complicated action offstage at the Metropolitan Opera. Here's who's involved — with perspective on disputes that aren't new. 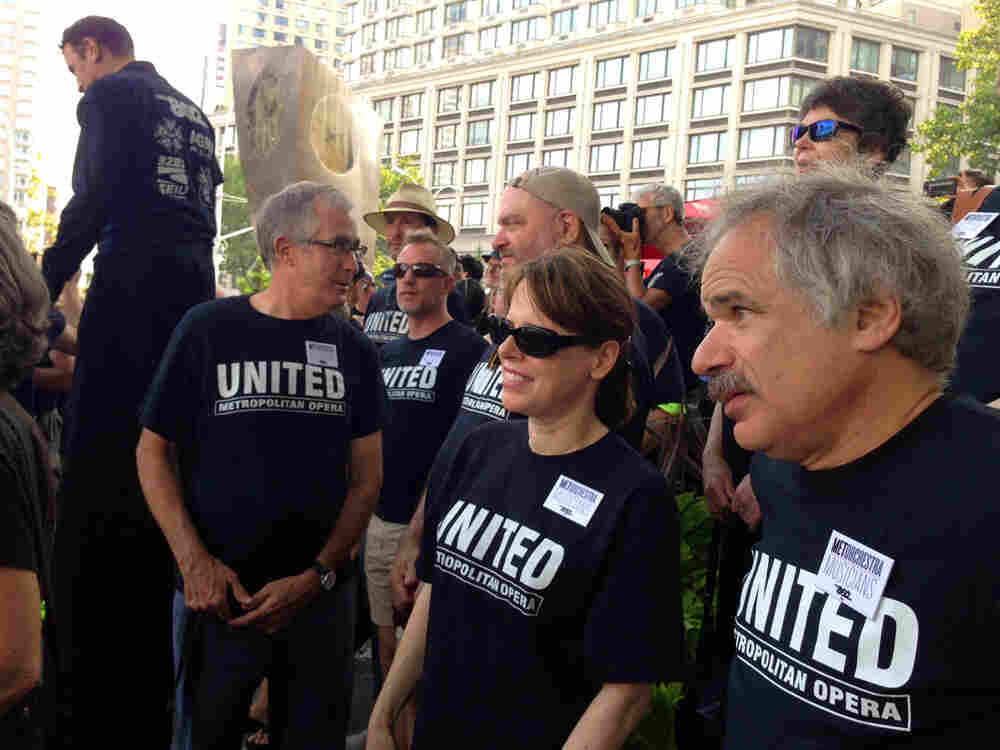 Members of the American Guild of Musical Artists and the American Federation of Musicians, two of the unions embroiled in contract negotiations with Metropolitan Opera management, rally this morning at Dante Park across from Lincoln Center. Jeff Lunden/for NPR hide caption

Think opera plots are tough to follow? Try wading through the complicated drama playing out offstage at the Metropolitan Opera. At its most basic, it's the story of management and labor unions fighting over a supposedly dwindling pot of money. The deadline to solve the squabble before a lockout, midnight Thursday, was met with little resolution but a 72-hour extension.

Nothing about the Met's labor imbroglio is elementary, including its large cast of characters. On one side you have Peter Gelb, the Met's general manager since 2006, and his counsel, Howard Z. Robbins, the attorney who represented the National Hockey League in its 2012-13 lockout.

Negotiating with Gelb are hordes of workers. About 2,400 of the Met's 3,400 employees are union members. They cover a broad swath of activities ranging from singing in the chorus, playing in the orchestra, dancing, painting sets, running the box office, singing solo roles, working in the call center, posting bills (advertising posters), running cameras and taking tickets. Three of these unions (Local 32BJ, Local 30 and Local 210) reached agreements Thursday. Here is a list of the unions involved:

The negotiations are now being conducted with the help of two officials from the U.S. Federal Mediation and Conciliation Service (FMCS), Deputy Director Allison Beck and Commissioner Kathleen Murray-Cannon.

The workers aren't always exactly unified. Each union has its own concerns and strategies. If one of the largest three unions — AGMA, IATSE Local 1 or AFM Local 802 — strikes a deal, it could greatly influence the negotiations for the remaining parties.

There have been many pronouncements about Gelb's artistic vision, the ups and downs of his tenure, the successful productions, the innovative Live HD movie theater broadcasts, the critical failures — even his attitudes about the viability of the art form.

Gelb's bottom line is that there's not enough money to sustain the Met as is. "No matter how you slice it," he told NPR, "opera is incredibly expensive." Gelb, who claims that two-thirds of the company's costs are labor related, would like to cut some of the unions' benefits, especially when it comes to the convoluted structure of overtime pay.

The unions say Gelb is simply spending too much and that the company's $2.8 million deficit doesn't warrant the nearly $30 million in cuts he seeks. The Wall Street Journal recently took a look at Met expenses on specific productions and box office potential. Plenty of hand-wringing can also be found over the high salaries of both Gelb and some of the union members.

The debate seems particularly acrimonious this time, due partly to the fact that so much of the drama has played out in our 21st-century media — something you couldn't say about previous Met labor disputes, which date back to 1885.

Among the most debilitating in recent times were the disputes of 1969 and 1980. President Carter had to intervene in 1980, sending a telegram to the unions and management pleading for a resolution to save the season, which had been indefinitely postponed. In 1969, failed contract talks forced the Met to open its season three and a half months late.

How this season will be affected is still anyone's guess. It's a positive sign that three of the unions have already settled and the chorus showed up Friday for a rehearsal of The Merry Widow. Still, they are among the smaller groups.

Gelb released a statement Friday, saying, "We want to work together with union representatives, and do everything we can to achieve new contracts, which is why we've agreed to an extension." The president of AFM Local 802, Tino Gagliardi, also weighed in, saying that while Gelb's move to postpone the lockout was constructive, "Settling this dispute in three days is highly unrealistic."