Accessibility links
Philip Glass And Steve Reich At BAM: Together Again Yet Still Apart : Deceptive Cadence Estranged colleagues Philip Glass and Steve Reich hadn't appeared together for more than 30 years — until last night in Brooklyn. Yet it was the music, not the reunion, that carried the show.

Philip Glass And Steve Reich At BAM: Together Again Yet Still Apart

Philip Glass And Steve Reich At BAM: Together Again Yet Still Apart 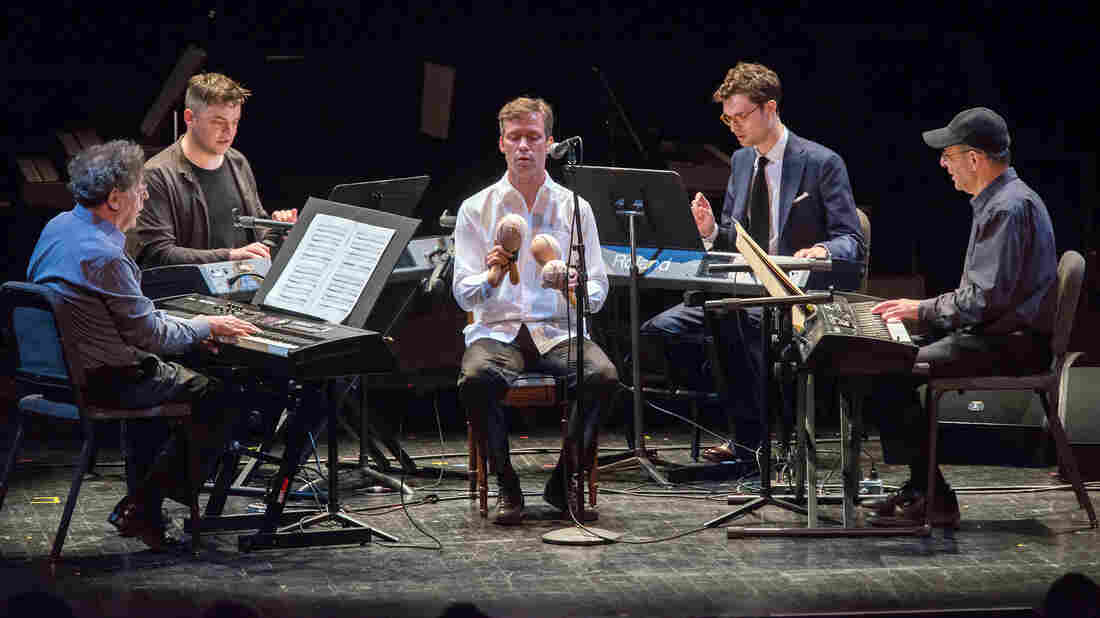 Throughout this month, the Brooklyn Academy of Music's signature Next Wave Festival is celebrating a record label with which it shares history and purpose: Nonesuch, marking its 50th anniversary this year. This festival within a festival kicked off with two of America's most influential composers, Philip Glass and Steve Reich, whose careers are tightly entwined with both the label and the venue. A three-night series began last night, with additional programs tonight and tomorrow.

In the lead up to yesterday evening, much fanfare had been made about Reich and Glass sharing a stage for the first time in more than 30 years. (The two men are said to have had a disagreement that sundered their friendship decades ago, though neither is willing to speak about the matter publicly.) Last night, they played Reich's Four Organs, which Glass had played with Reich in the 1970s and which they will repeat this evening; also this evening, Reich will return the compliment by playing in Glass' 1969 piece Music in Similar Motion, which Reich played more than 40 years ago.

In a conversation a couple of weeks ago, Reich told me that the emotional resonance of this performance of Four Organs was much broader than his association with Glass. For the BAM performance of Four Organs, the two former colleagues — now both in their late 70s — were joined by composer-performers in their 30s who have become celebrated in their own right: Timo Andres and Nico Muhly, as well as percussionist David Cossin. Muhly is a Glass protege; Cossin was a student of the late percussionist James Preiss, who was one of the first members of Reich's group in 1971, and who died in November. As Reich told me, "There were a lot of humane things going into this performance."

The performance was — at least on the first evening — not entirely smooth, despite the emotional gratification. (It will be repeated on this evening's program.) Described by Reich as "the longest V-I cadence in the history of Western music," Four Organs unspools the six notes of two chords (B - D - F# and E-G#-B) in an audacious deconstruction that, while sounding very much of its time, also manages to evoke 13th-century vocal music by composers like Perotin.

The compositional complexity of Four Organs also demands monastically intense and often visible counting by its performers to keep it on its rhythmic and harmonic rails. Last night, that effort was plain — not only could the audience see the organists' lips move as they counted, but we could frequently hear them counting off the beats as Muhly kept the group moving along with wildly large head swings to mark off passages for his fellow artists. Despite the anticipation that had surrounded their joint appearance, Reich and Glass greeted the audience's applause with courtly bows, but no physical gestures of amity to telegraph their patched-up relationship — professional, yes, but not particularly warm. The performance itself spoke enough, it seems.

The rest of the evening was split between Glass' and Reich's work, a format that gives similar shape to the other two concerts in their BAM miniseries. Glass and his musicians, the Philip Glass Ensemble, took the stage first, beginning with a small instrumental excerpt from the CIVIL warS (formerly and more formally called the CIVIL warS: a tree is best measured when it is down), a hugely ambitious 12-hour opera created by director Robert Wilson with music by Glass, David Byrne, Gavin Bryars and a host of others for the 1984 Summer Olympics, yet never entirely staged. Despite the enormity of that unrealized project, this excerpt is intimately scaled and dominated by high woodwinds playing signature Glassian ostinatos in dreamlike fashion. Ripped from its context, the "Cologne" excerpt felt like a fading photo pulled out from a long-stored stash.

Even though it was also presented in excerpts, the focal point of Glass' portion — Parts 1 and 2 from his Music in 12 Parts, written between 1971 and 1974 — was wholly satisfying on every level. Expertly performed at this concert, Music in 12 Parts functions as something of a guide to some of Glass' most interesting compositional ideas in the 1970s. Part 2 includes voice, which becomes a deeply humanizing element for Glass' mechanisms, but also points to one of his most fruitful musical cross-fertilizations.

Beginning in the mid-1960s, Glass became deeply interested in the music of northern India, which he had encountered rather randomly via Ravi Shankar in an instance of what Glass has called "blind luck." (The two went on to collaborate, which has been documented on recordings made in the 1980s and which have been partly reissued on a project I produced.) A very important idea within north Indian classical music is improvisations on scale notes, which vocalists render in syllabic sargam (an acronym for sa re ga ma pa dha ni sa, syllables that roughly correspond to the Western solfege notes of do re mi and so forth). In Glass' hands, that vocalization in Indian improvisation becomes a repetition taken to its extreme in a Western setting — still buoyant, but utterly transformed.

It would have been perfect to let the excerpted Music in 12 Parts be the punctuation mark ending the concert's Glass-centered half, but instead a small group of keyboardists and percussionists re-emerged to play an excerpt from Glass' 1983 ancient-Egypt opera Akhnaten, in music for the funeral of Pharaoh Amenhotep III. Unfortunately, its orchestration — synthesizers and electronic drums — sounded as foreign and dated as Betamax, and the piece was a letdown after 12 Parts.

The concert's second half was devoted entirely to Reich's Music for 18 Musicians, which became the emotional heart of the evening, and which Reich dedicated to Preiss from the stage. Written between 1974 and 1976, this nearly hour-long piece has become an iconic benchmark of 20th century music. In 2014, it is still as beautiful, fresh and compelling as ever, a vital part of the musical canon.

The members of the Reich ensemble who performed at BAM last night included musicians who have played with the him since the 1970s, and their love of the score was palpable. That sense of familial embrace was hugely present in this joyous performance — and that pleasure radiated back to the musicians when the piece concluded. For the first time all night, the audience broke into raucous cheers and an extended standing ovation.