Accessibility links
Listen To The Atlanta Symphony While It's Locked Out — Again : Deceptive Cadence In music from Giuseppe Verdi to Jennifer Higdon, celebrate the sound of the venturesome Atlanta Symphony Orchestra while it's silenced by a bitter labor dispute.

Listen To The Atlanta Symphony While It's Locked Out — Again

Listen To The Atlanta Symphony While It's Locked Out — Again 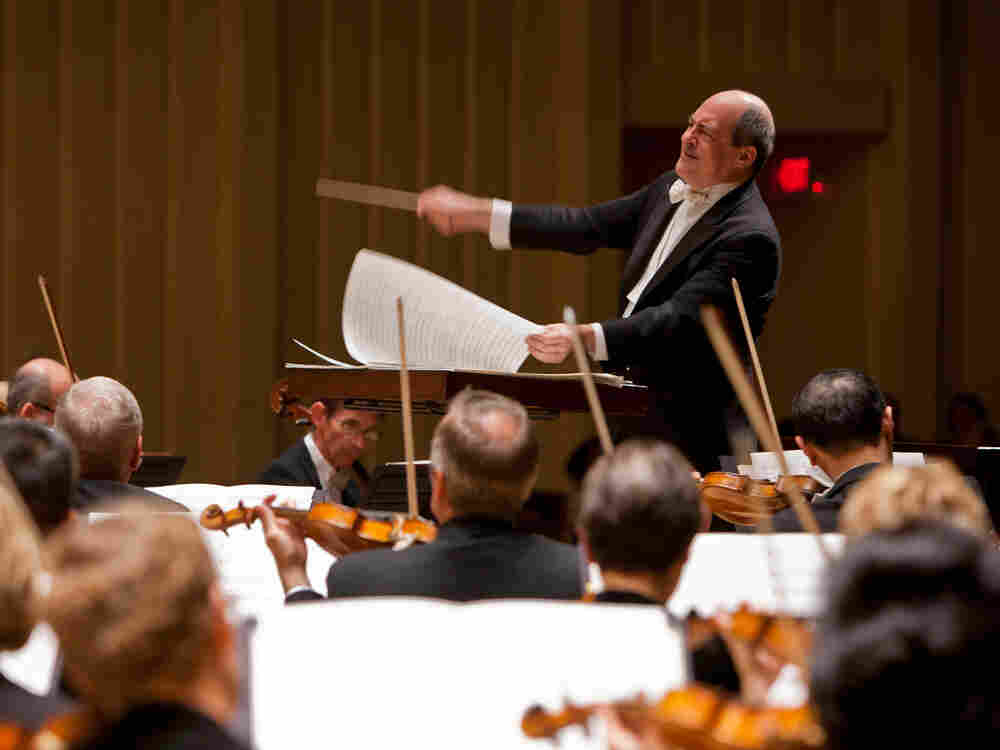 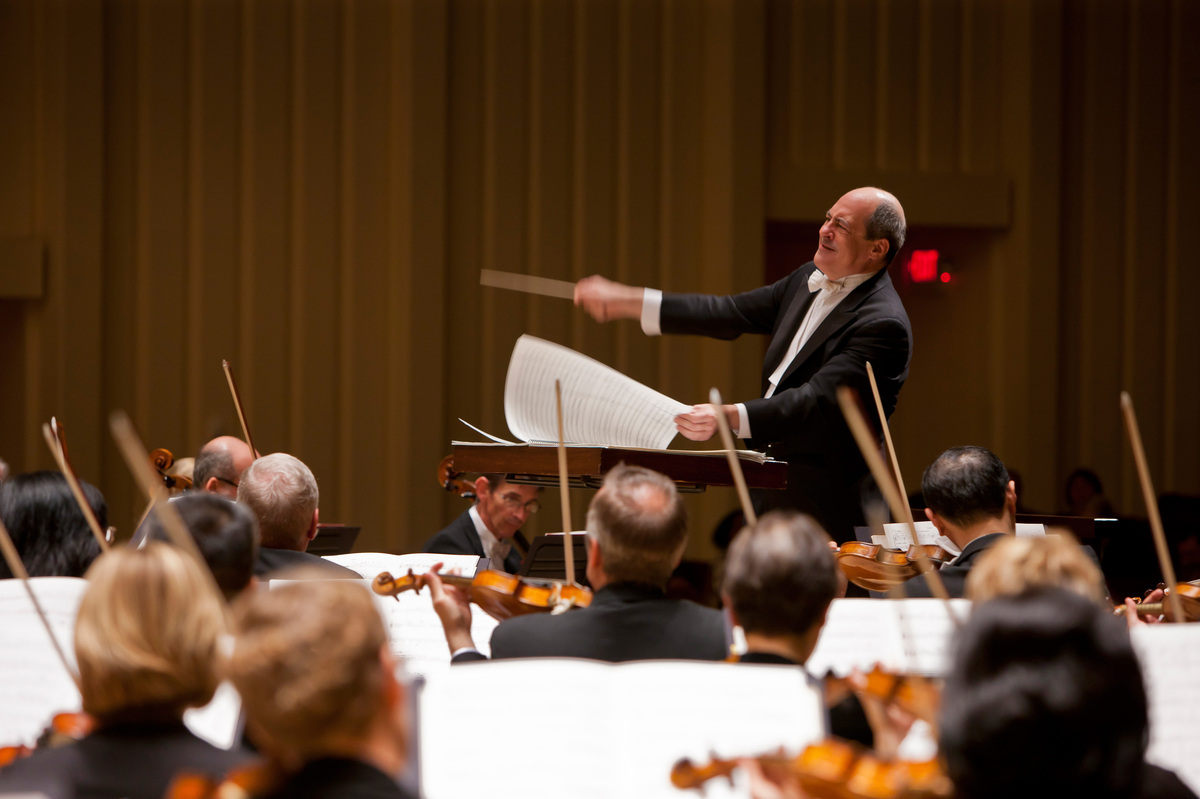 Robert Spano conducts members of the Atlanta Symphony Orchestra, who are now locked out for the second time in two years after failed contract negotiations.

Alas, it is déjà vu all over again for the Atlanta Symphony Orchestra. At midnight Saturday, the ASO musicians and management failed to meet the deadline to agree on a new contract after eight months of negotiations. That means the players, while still employees of the orchestra, are effectively locked out of the Woodruff Arts Center (the orchestra's home) and will not receive paychecks until a new agreement can be ratified. ASO musicians demonstrated outside the hall Tuesday.

A similar labor dispute silenced the orchestra exactly two years ago. The gulf between musicians and management appears to be wide this time. The ASO claims its financial situation is unsustainable while the musicians fear the proposed cuts will inflict irreversible damage to the sound and reputation of the orchestra. Let's hope the two sides can reconcile soon. Meanwhile, here's audible proof — posted in Sept. 2012, the last time this happened — that the Atlanta Symphony is well worth caring about, no matter where you live.

With just a month to go before opening its 68th season, the Atlanta Symphony Orchestra has gone silent. A bitter labor dispute between the ASO musicians and orchestra management has resulted in a lockout — meaning the players have literally been prevented from entering the Woodruff Arts Center and stripped of their salaries and health benefits.

The two sides appear to be stuck over the amount of cuts ASO players are willing to endure versus the amount management says its needs to help battle a bulging $20 million debt. The lockout seems a pity, considering that the two sides are so close. They are arguing, at this point, over a figure of $1.2 million over a proposed two-year contract.

Let's forego details on what is, for the moment, essentially a war of words and budget numbers. Instead, let's focus on what makes the ASO one of this country's important orchestras, hoping that the dispute will resolve quickly (and fairly).

In the meantime, below are five terrific Atlanta Symphony Orchestra recordings. They make the point that the ensemble, under conductors like Robert Shaw (who created the excellent Atlanta Symphony Chorus), Robert Spano and Donald Runnicles, is a versatile, gutsy group with a longstanding commitment to contemporary music — not to mention the vast contributions it has made to its home city and the American South.

The ASO has had the great fortune to be recorded in resplendent sound by the Telarc label in more than 100 albums over a 32-year span. Over that time the group has racked up a dazzling 27 Grammy Awards (yet not, it should be noted, without a modicum of controversy). These days the orchestra records for its own ASO Media.

Got your own favorite Atlanta Symphony recordings? Have you been to hear the orchestra lately? Please tell us in the comments section. 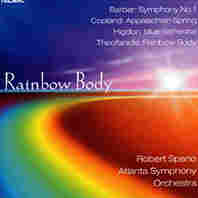 The Atlanta Symphony Orchestra has had a big hand in fostering what's called the "Atlanta School" of composers. Along with its music director Robert Spano (who took over in 2001), the orchestra has championed music by Christopher Theofanidis, Michael Gandolfi, Osvaldo Golijov and Pulitzer Prize winner Jennifer Higdon, whose blue cathedral is excerpted here. Higdon says: "As I was writing this piece, I found myself imagining a journey through a glass cathedral in the sky." With its airy, warm strings and plaintive wind solos, it's easy to hear why. 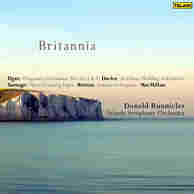 Scotsman Donald Runnicles came on board with Robert Spano in 2001 as the ASO's principal guest conductor. He also has a flair for theater, directing the Deutsche Oper Berlin. And there's plenty of drama in Peter Maxwell Davies' An Orkney Wedding, with Sunrise. It begins with wedding guests innocently arriving at a wedding hall. Single malt and music ensue. At the end (where this excerpt picks up), tipsy guests leave and, as the composer describes it, "with echoes of the processional music in our ears, and as we walk home across the island, the sun rises to a glorious dawn ... represented by the highland bagpipes, in full traditional splendor." 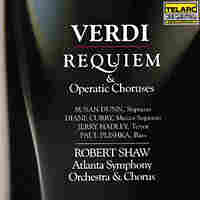 Robert Shaw, considered one of the greatest choral conductors, took over the ASO in 1967 and began molding the modern sound of the orchestra. In 1970 he founded the ASO Chorus and embraced the repertoire for chorus and orchestra like Verdi's Requiem, heard here in his 1987 recording. Verdi's version of the traditional Requiem is less consoling, more operatically in-your-face. This slam-bam "Dies Irae" finds Shaw's chorus and orchestra in an exhilarating full cry. 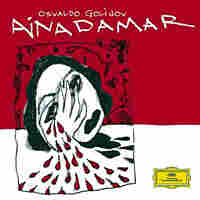 One of the focal points in the Argentine composer Osvaldo Golijov's debut opera Ainadamar is the "fountain of tears," an ancient well in Granada where Spanish poet Federico Garcia Lorca was murdered in 1936, during the Spanish Civil War. Golijov's score is another of his seamless blends of classical and folk styles. Spano deftly leads the ASO, joined by flamenco players and electronic sound designers, in the opera's opening sequence, including a ballad, which begins: "What a sad day it was in Granada; the stones began to cry ..." The soprano is Dawn Upshaw. 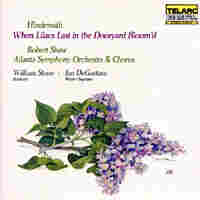 08When lilacs last in the dooryard bloom'd - Part 7

Paul Hindemith: When Lilac Last in the Dooryard Bloom'd (Excerpt)

Some 22 years before he took over the ASO, Robert Shaw commissioned music from a newly minted American, Paul Hindemith, who fled Nazi Germany in the 1940s. Hindemith, struck by the death of President Franklin D. Roosevelt, turned to poetry by Walt Whitman, whose When Lilacs Last in the Dooryard Bloom'd eulogized Abraham Lincoln. Hindemith's music moves through various stages of grief and introspection. This middle section, "Introduction and Fugue, Lo! Body and soul," sports rays of joyous hope and features Shaw's mastery in shaping the interlocking orchestral and choral parts. It's Shaw at his finest.

Album
Hindemith: When Lilacs Last in the Dooryard Bloom'd (A Requiem for Those We Love)
Artist
Robert Shaw
Label
Telarc Distribution
Released
1987