Accessibility links
'My Goal Is To Not Be Bored By What I Do': Itzhak Perlman At 70 : Deceptive Cadence Once a kid with polio from Tel Aviv who hated practicing his instrument, the master violinist says he's still learning, even as he prepares to receive the Presidential Medal of Freedom. 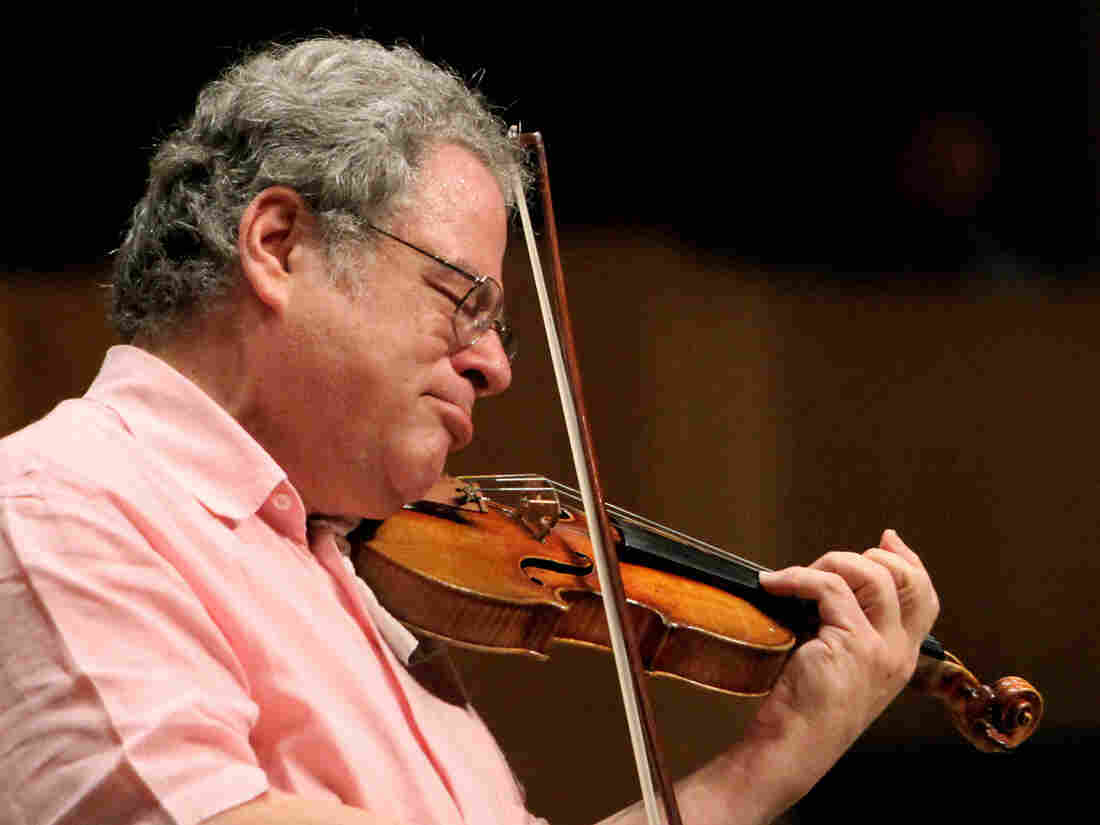 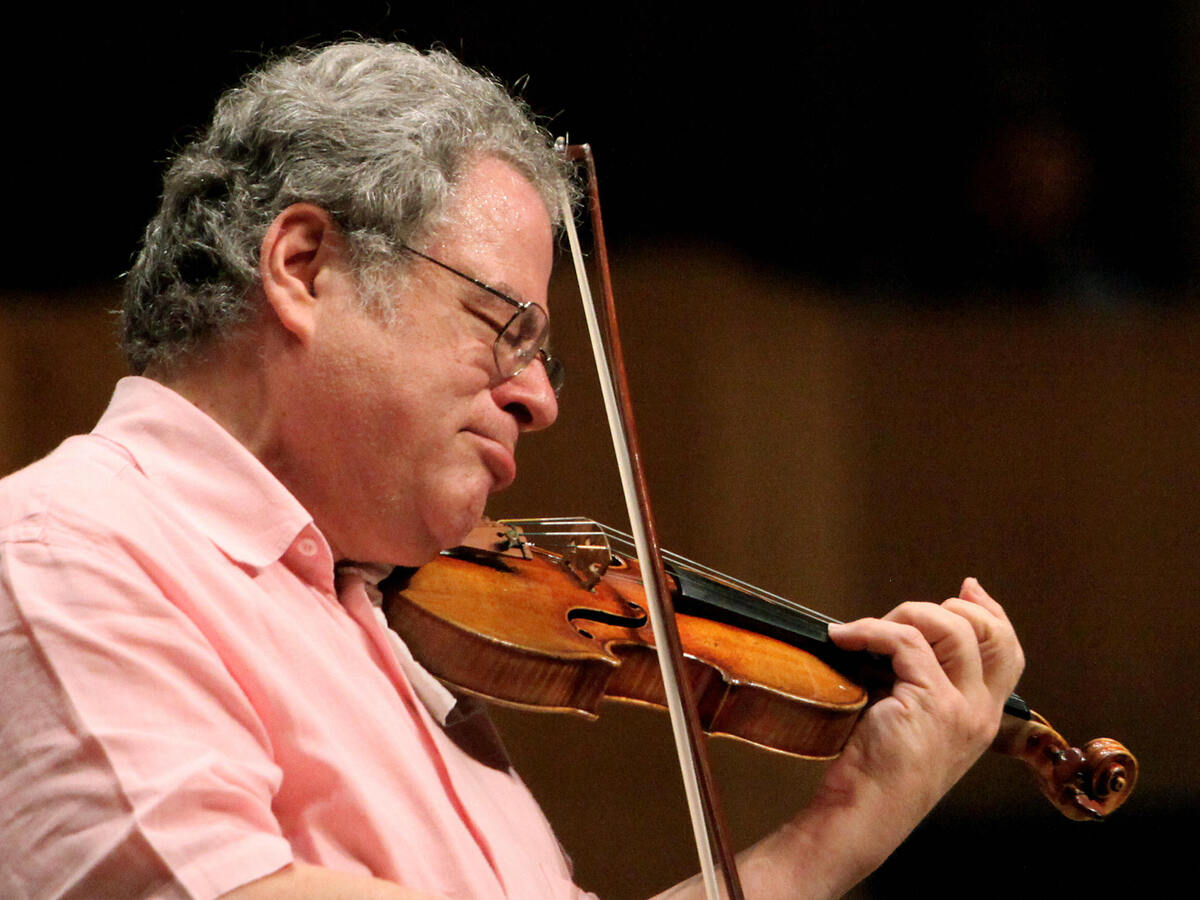 Israeli violinist Itzhak Perlman in 2009, playing his Stradivarius during a rehearsal with musicians from the Simón Bolívar National Youth Orchestra in Caracas, Venezuela.

On a long drive, Itzhak Perlman will sometimes listen to classical music on the radio and try to guess who's playing.

Sometimes it's hard to be sure: Perlman has played so much, for so long, and says he's still learning, even at 70. This week, the great violinist will be honored by President Obama with the Medal of Freedom, a milestone in the life of a naturalized American citizen. Perlman grew up in the 1940s and '50s in Tel Aviv, then a burgeoning young city being built in the brand-new country of Israel.

"I would see them make cement blocks," Perlman tells NPR's Steve Inskeep. "They would mix the cement and so on, and they would put it in little things that would make it a block that they would use in the buildings. So I actually knew how buildings were being built from the beginning. That was very exciting. And another excuse not to practice."

Though as a child he hated practicing and contracted polio, Perlman developed his talent early. At 13, he was discovered by a giant of American TV: Ed Sullivan, who featured Perlman on his show more than once.

"He wanted to have a show made out of just Israeli acts. I made the finals, and I was in the cute little boy category, I guess," Perlman says. "When you live in a small country such as Israel, the dream of any musician is to go abroad. All I thought was that it was the most exciting thing in my life — to go out to the States."

Perlman's work was recently compiled in a 77-CD box set, but even that massive collection doesn't cover his entire career. And if you've kept up to date on viral videos lately, you may have spotted him conjuring music from a certain kitchen appliance.

Asked if his understanding of the violin has changed since his early days, he says it's not the instrument that really matters.

"I think that I was pretty advanced as far as, technically, what makes it work — so I don't think that right now you can say I know much more about the instrument than I did when I was 20," he says. "I think the important thing was knowing how to play the music, how to do the phrasing, how to be a musician. That thing has evolved with me."

Itzhak Perlman: I'm Not On The Stage To Walk, I'm On It To Play

Itzhak Perlman: I'm Not On The Stage To Walk, I'm On It To Play

Steve Inskeep continues his conversation with Itzhak Perlman, who was 13 when he performed on The Ed Sullivan Show in 1958. When he was four, Perlman contracted polio and has used crutches since.

And earlier this week, we heard from one of the world's most celebrated classical musicians. Itzhak Perlman was just 13 when he performed on the "Ed Sullivan Show" in 1958. And he says he's still getting better.

ITZHAK PERLMAN: It's almost like an X-ray listening device that I have where I can actually say, I'm going to express this phrase in a particular way.

PERLMAN: It's like an illumination that I feel when I play a particular phrase. To simplify it, I hear better.

MONTAGNE: This morning, we're going to focus on a different aspect of Itzhak Perlman's life. When he was 4 years old, he contracted polio. He has used crutches ever since. And he told our Steve Inskeep that fact does not really have anything to do with his performances.

PERLMAN: Right now I don't walk on stage unless I'm playing with a orchestra. But when I play a recital, I'm sort of on a scooter, and I just scoot very quickly on stage, and they're saying, wow, look at this. He's so fast. But that I don't think is a problem. I can't walk very well, but I'm not onstage to do walking. I'm on the stage to play.

We were pondering whether it made any difference to you that a soloist would typically stand, but of course, you do not.

PERLMAN: Believe me. I can tell you that many soloists probably wish they could sit.

PERLMAN: You have to stand there for, like, two hours and play a recital, you know. Maybe somebody has flat feet or something, I don't know. When you think about violinists, the majority playing sit down.

INSKEEP: Let me challenge you to answer what's surely an unanswerable question. Would you have been the same musician that you are had you not been stricken with polio at a very young age?

PERLMAN: I think yes. You know, a lot of people like to think that polio was a inspiration in what I do. I think that music has to do with what kind of passion do you have.

PERLMAN: If I was destined to be a musician, it would have happened.

INSKEEP: Oh, I wondered about it a little differently. I wondered if it was possible that polio limited some of your options and therefore made it more likely that you would grab this option.

PERLMAN: That could be, but that had to do probably with my parents. You know, maybe they felt that it would be a very good thing for me to do something in music because soccer was out of the question or basketball.

INSKEEP: Did they ever have that conversation with you, or was that just kind of implied?

PERLMAN: No, no, no, it was very natural. There was no question about, oh, you can't do this. You have to do that. It was like, you decide to be a musician, you have to put in the time.

INSKEEP: I'm impressed to hear this story because I think you're telling me that people expected no less of you because you couldn't walk.

PERLMAN: Well, I don't know if that's the case, you know, because when it was time to have a career, then people had questions. They had to prove that the quality of what I had to offer was of the highest level.

INSKEEP: I've been backstage at a few performance halls. Some of them are quite old. They have lots of steps. Have you ever arrived at a performance and had great difficulty just getting where you needed to go?

PERLMAN: Absolutely. You know, I know all the garbage elevators and a lot of halls. They're a lot of fun (laughter).

INSKEEP: You see everything a little differently than anybody else who performs there, I guess.

PERLMAN: What upsets me is that when I go into a place where it's fairly new and then there's a problem. But not that - a lot of people say, oh, this is not accessible because it's old. Oh, really? That means that in olden days, there were no people with disabilities. It's silly. The other day, I went to a very famous hotel here in New York, and it was disgusting. I went to a wedding, and I couldn't get to the wedding because there was stairs, so I had to go through the kitchen. And there was steps all over the place.

INSKEEP: In that situation, do you call attention?

INSKEEP: I mean, you're Itzhak Perlman. They listen to you, I would think.

PERLMAN: At the moment, yes.