Accessibility links
Behind The Music Of 'Youth' : Deceptive Cadence David Lang was tasked with writing music for Michael Caine's character, an elderly composer who gets abruptly called out of retirement. 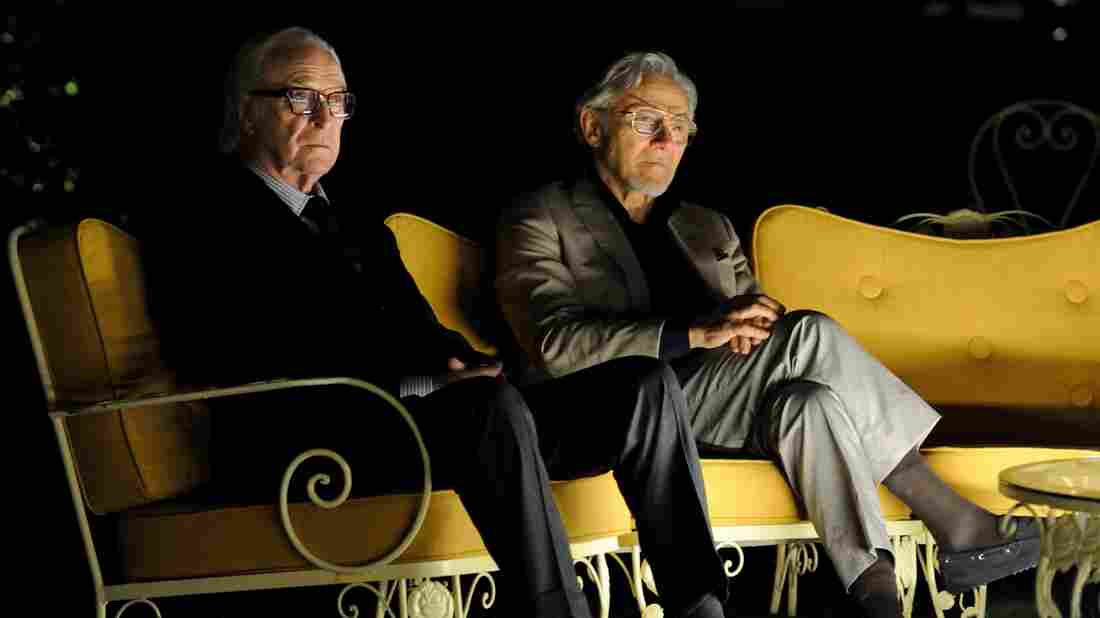 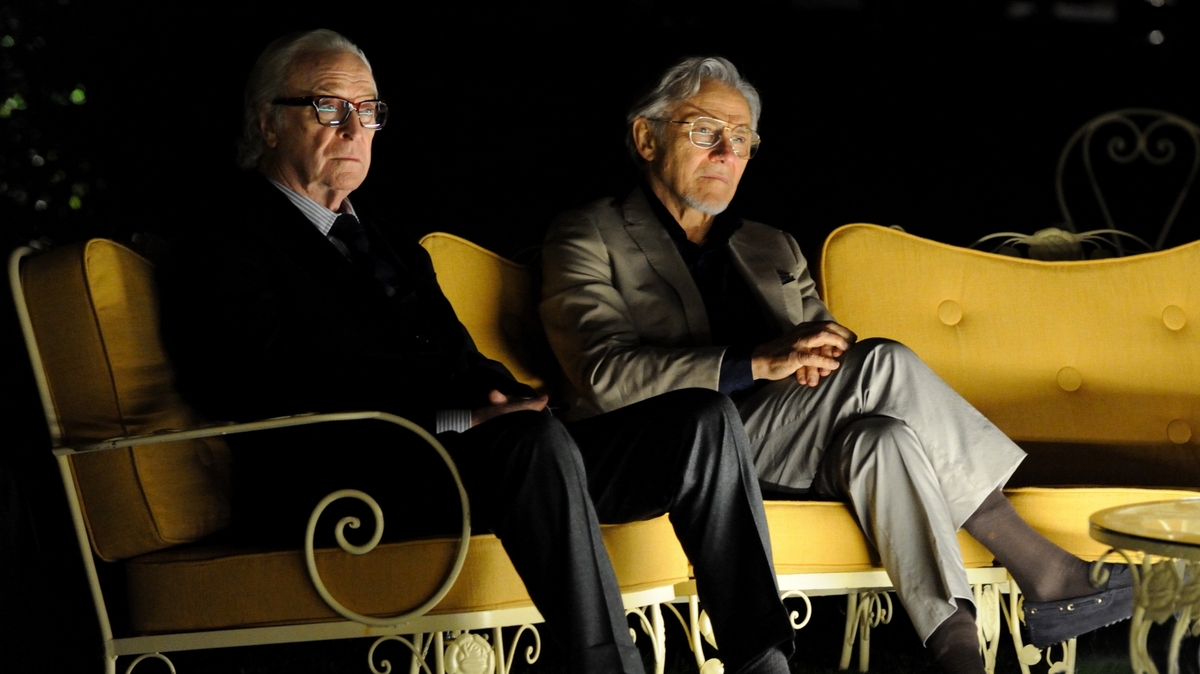 Michael Caine and Harvey Keitel star in Youth as the fictional composer Fred Ballinger and his filmmaker friend Mick Boyle.

In the new movie Youth, an elderly, retired composer-conductor is called upon to conduct for the first time in years. He's an Englishman named Fred Ballinger — and the request is from Queen Elizabeth II. It seems Ballinger's composition Simple Songs, written when he was a much younger man, is the only thing the Queen's husband, Prince Phillip, will listen to.

That premise necessarily makes a few demands of the film. Someone had to play Ballinger convincingly, which Michael Caine does. More importantly, though, someone had to compose a piece of music that could plausibly account for Prince Phillip's fictitious fondness, and for Ballinger's fictitious fame. That job was handed to David Lang.

The Pulitzer Prize-winning composer spoke with NPR's Robert Siegel about the curious task of writing music fit for royalty, from the perspective of an artist well past his glory days. Hear their conversation at the audio link, and read an edited version below.

Robert Siegel: Tell me about "Simple Song #3," the composition at the heart of the story. Was this written after you saw or read the movie, or did you have it in the drawer all along? 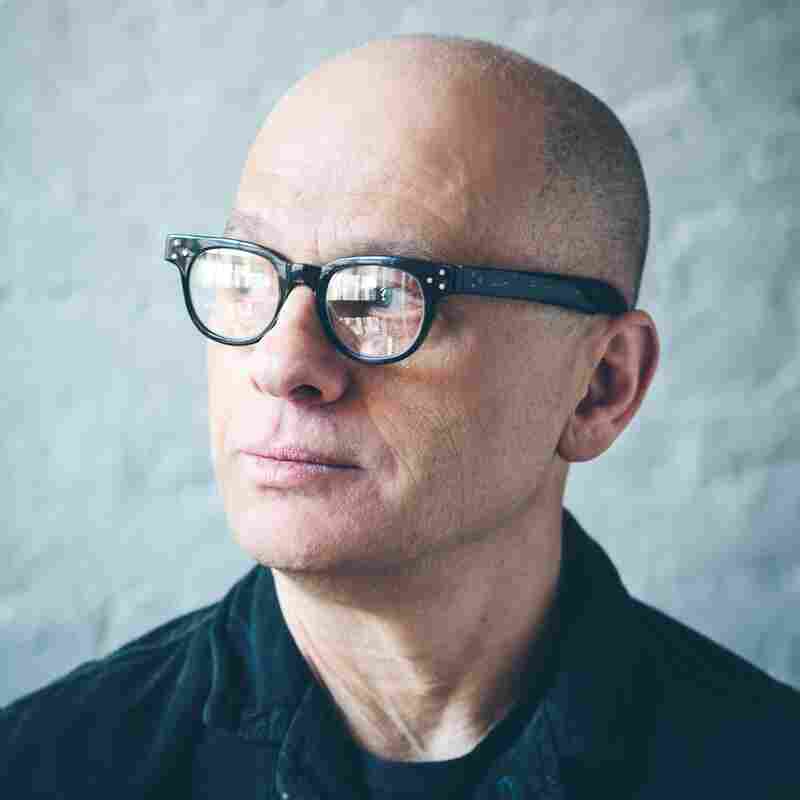 David Lang: No, I wrote it specifically for this film. But the really exciting thing about it was that, because this movie is about a composer, [director] Paolo Sorrentino had the idea that the music should play a huge role — so he came to me before the script was really even finished. We would have these conversations about what music could mean in a movie, how music could be stretched out through the length of the entire movie to show the development of a person and his relationship to his own work, and his past, and his love.

For you, then, was this a case of composing in character, trying to understand Fred Ballinger? Or is this the same piece that you would have composed if it were all your own?

I sort of looked at it like an opera, actually. Sometimes when you write an opera, you end up having to put yourself in the heads of characters who do things other than what you do. When Verdi writes about an evil person, he's not saying, "I'm an evil person." He's trying to project into that so he can figure out how to make that evil person the most believable evil person possible.

And so, I had to sort of project myself into that person. I had to imagine what his emotional story was. And I could imagine that he is conflicted — about remembering what love meant to him when he was young and he wrote this song, and what love means to him now, when he's an old man and his wife is no longer with him. I wanted a song that could be capable of giving off that kind of emotional range.

There's a scene in the movie in which Fred Ballinger, who gave up composing and conducting music many years ago, is in the Swiss countryside. He hears cows and cowbells and the sound of birds taking flight — and he actually starts conducting. Tell me about composing this piece of music, which will come to be called the "Wood Symphony."

This was so much fun to compose, I have to say. The whole idea was, he goes out into the forest and looks around, and using his conductorial skills, he points at the cows and tells them to be silent — and then he brings them into this beautiful composition, which is just in his head. It's a very funny scene, but it's also very touching, because it's the first moment where you actually see him being able to be musical with himself.

Is this the way a composer hears the world? Do you hear the music in everyday sounds?

I think so. I think we use music to understand where we are. And also, I think we think of our emotional lives musically. We think that the way to access the parts of ourselves which are the most true to who we are is with music. We use music to get to ourselves. So, this was a little window of a way to show Michael Caine trying to pay attention to himself.

You had to write "Simple Song #3," but someone else had to perform it. Who are we hearing in the score?

One of the things that I had discussions about with Paolo from the very beginning was who this man should work with. You know, he's supposed to be a very famous composer and conductor, so he needs to be a world class musician — and his collaborators need to be world class musicians as well. So, the singer who sings this song is the international opera star Sumi Jo. The violinist who plays the solo is Viktoria Mullova, who's an amazing virtuoso. And the orchestra is the BBC Concert Orchestra, which is one of the great orchestras in England. It really seemed like all of these people were up to the level that the character was supposed to be.