Accessibility links
The Show-Stopping Singing Of Javier Camarena : Deceptive Cadence The Mexican tenor has, for the third time, commanded such a tremendous response from the Metropolitan Opera audience that an encore had to be sung during a production. 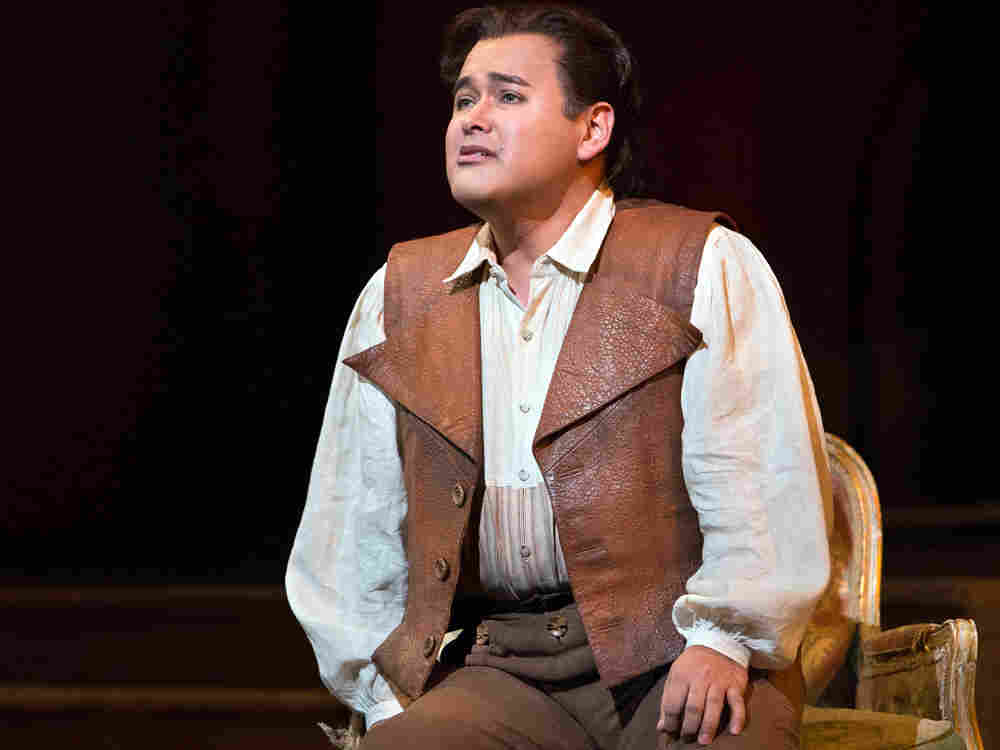 In our jobs, when we're told to redo something, it usually means we've made a mistake. That's not the case for Javier Camarena. Earlier this month at the Metropolitan Opera in New York, the tenor had the chance to retake an aria during a performance of Donizetti's Don Pasquale because the audience went bonkers after the first time he sang it.

For many decades, the Met followed a strict no-encores policy. Camarena, who turned 40 on Saturday, has sung three encores at the Met so far. He joins fellow tenors Luciano Pavarotti and Juan Diego Flórez as the only singers since 1942 to break the rule by repeating an aria during a complete performance. At the audio link on this page, Camarena speaks with NPR's Renee Montagne about his career and his latest encore.

"It doesn't happen often," he says. "But it's something that the public makes possible. It's about the reaction of the public when they are receiving your work. They measure this with applause, and actually they are asking for more."

In this case they asked for a repeat of the aria "E se fia che ad altro oggetto," which sports a stratospheric high D-flat at the end. Camarena places the note with a ringing sound and surprising ease. It's the kind of supple yet strong singing that has brought the Mexican tenor to the world's top opera houses.

But how can you tell when to sing an encore, right in the middle of an opera? Camarena says it's a gut feeling.

"We did five performances, and right from the first one you could actually see what was happening with the public," he says. "And as we say in the theater, 'What the public demands, you give.' "

Camarena grew up in the Gulf Coast town of Veracruz, Mexico, with few signs of opera in his family.

"My father, now he's retired, was some kind of Homer Simpson, you know," Camarena says, chuckling. "He was working in a nuclear plant. ... My mother is a chef, and now she teaches cooking. We loved music at home. We could hear every kind of music but classical, and that's something that came with me."

Camarena had a voice. As a teenager he sang in a cover band and as a wedding singer. At the late age of 19, he wanted to study music. It was too late to become a pianist. "My best chances were with singing," he says.

In college, Camarena studied electrical engineering, but he eventually dropped it for music. He didn't tell his parents. After he finally admitted the switch, he says, "they were very, very angry." In one conversation with his mother, he recalls, she told him that he could end up sweeping streets if he pursued music. "Maybe I will," he told her. "But I will be happy." In the end, they acknowledged his passion.

After three years of study with an Italian teacher, Camarena finally saw his very first opera — on video. "It was Plácido Domingo and Éva Marton at the Met singing Turandot from Puccini," Camarena says. "And I was so, so in love then. And everything became clear. I knew I wanted to do this."

Camarena is billed as a bel canto tenor. Meaning "beautiful singing," it is a style born in Italy, best heard in music by composers such as Bellini, Donizetti and Rossini, and requires voices with agility and a dynamic high register. "The main purpose," Camarena says, "is that you can show the possibilities and the beauty of the melodies in the voice."

It is the beauty, and those thrilling high notes, that forces audiences to leap to their feet. And every once in a great while, at least at the Met, an encore gets triggered by that thunderous applause.

"It feels like a tsunami sound coming to you," Camarena says. "It's covering every single space in the theater. My stomach is shaking. But it's not only about the applause, it's the atmosphere. You can cut it with a knife. It's really magical and joyful. And I can actually feel that."