Accessibility links
Songs We Love: Alarm Will Sound, 'Revolution 9' : Deceptive Cadence The new music ensemble from New York puts a bold, orchestral spin on that Beatles song you always skip over on the White Album.

A Symphonic 'Revolution' From Alarm Will Sound 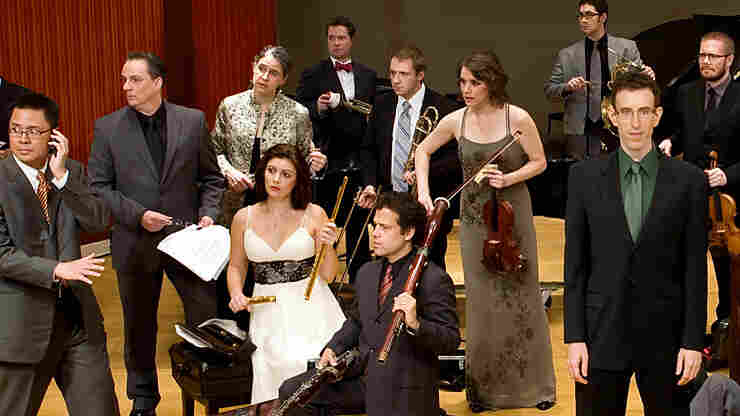 The New York-based orchestra Alarm Will Sound puts a fresh twist on The Beatles' most maligned song. Carl Sander Socolow/Courtesy of the artists hide caption

Late in 1968, it was astounding to me how one of the best-loved bands could create one of the least-liked songs. It was "Revolution 9," near the end of The Beatles' sprawling White Album.

But then, I was only 7 years old and, frankly, those eight minutes of chaotic sounds and mumbled words were positively frightening. And who was that guy who kept intoning "number nine?"

It would be years before I realized that The Beatles were actually emulating an established musical genre pioneered by composers like Pierre Schaeffer and Karlheinz Stockhausen. Schaeffer created a style of electronic music known as musique concrète in the 1940s, and Stockhausen (who is pictured on the Sgt. Pepper's album cover) pushed it further in pieces like Gesang der Jünglinge and Hymnen.

It's in the spirit of those mid-century modernist experiments that conductor Alan Pierson and his New York-based ensemble Alarm Will Sound present their own rendition of the misunderstood Beatles track. The arrangement is by Matt Marks, the group's horn player, and it opens the new album Modernists.

Instead of employing found sounds, a principal tenet of musique concrète which the Beatles followed faithfully, AWS takes an all-acoustic approach (except for brief noises from a low-tech Crackle Box near the end). This softens contours but doesn't dampen the frenetic chaos.

Gone is the exaggerated, left-right stereo panning of the original, which was arguably more annoying than clever. Gone, too, are the backward-running tape loops, but the ensemble mimics them brilliantly with slithery woodwinds highlighted by a groaning bass clarinet. Three percussionists help stage any number of jarring juxtapositions while band members effectively babble the nonsensical text. By establishing a performance practice, AWS elevates the piece from maligned recording-studio experiment to legitimate chamber orchestra work.

"Revolution 9" has been denigrated by critics and fans, but it's also surprisingly resilient. Phish and the Neil Cowley Trio, among others, have covered it and The Simpsons even took a swipe at it. These days, it also has an uncomfortable resonance, as its topsy-turvy nature reflects our unpredictable world more than ever before.

Modernists is out now on Cantaloupe Music.