Accessibility links
Even Scarier Than The Book Or Movie: 'The Shining' Is Now An Opera : Deceptive Cadence "Stephen King's original novel is all about love, death and power," says Pulitzer-winning composer Paul Moravec. "And those are the three foundational components for an opera." 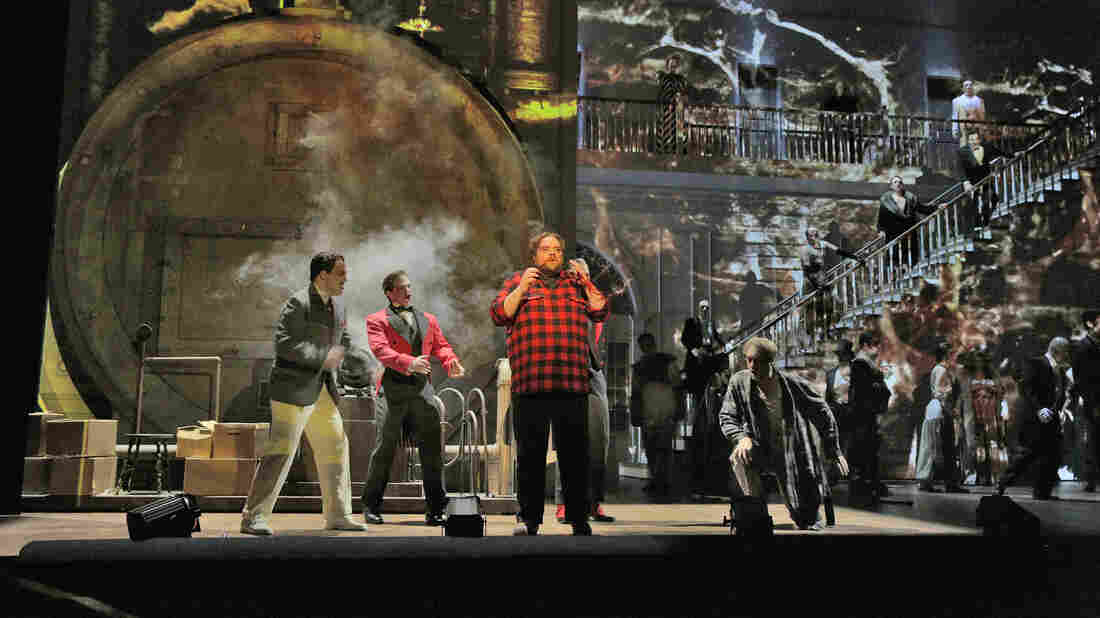 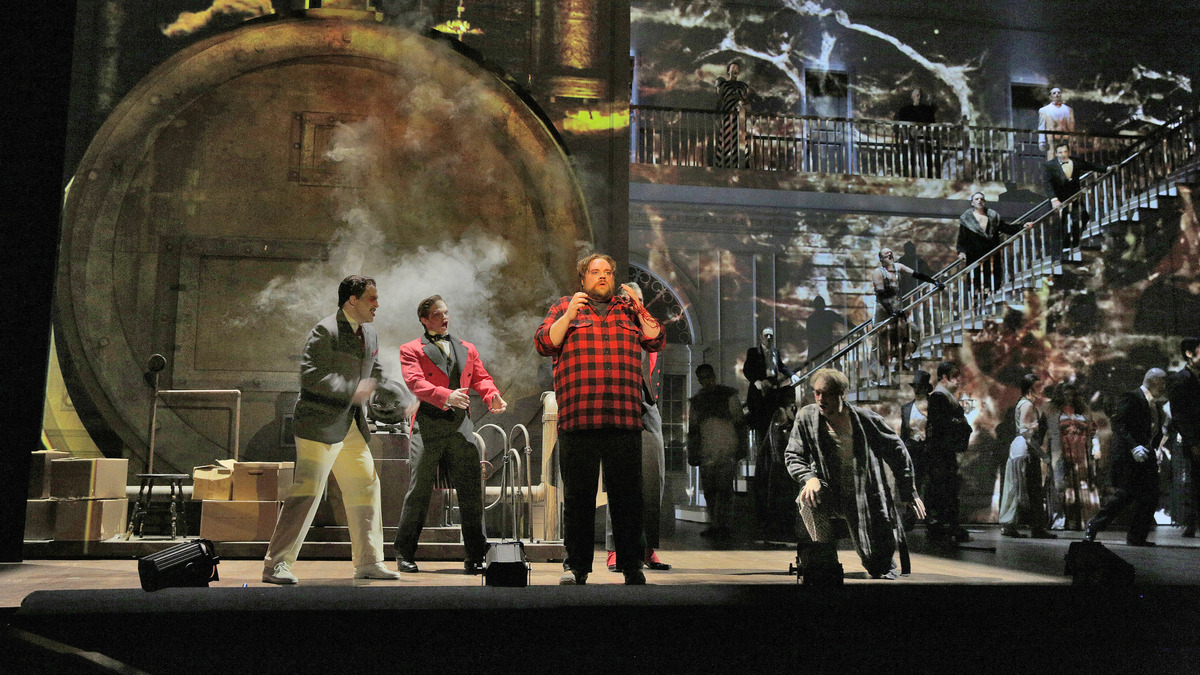 The Minnesota Opera's adaptation of The Shining brings the horror story to the stage.

Ken Howard/Courtesy of the Minnesota Opera

The Shining was Stephen King's first hardback bestseller. Stanley Kubrick's film version was listed by no less than Martin Scorcese as one of the scariest horror films ever made. Now, the story is an opera — and its creators want it to be even more terrifying than the book or the movie.

Composer Paul Moravec and librettist Mark Campbell collaborated on the project, which opened last week at the Minnesota Opera, for three years. Their work shows in the three-foot-tall, several-inch-thick tome that houses The Shining's orchestral score.

"It's big, isn't it?" Moravec chuckles, holding it. "Look at all these notes!"

"Lots of notes!" Mark Campbell offers. "Some of them are pretty good."

Moravec says the idea of an operatic adaptation of The Shining immediately attracted him.

A Sound Of Fear, Forged In The Shadow Of War

"Stephen King's original novel is all about love, death and power," he says. "And those are the three foundational components for an opera."

Published in 1977, The Shining was Stephen King's third novel, and it established him as a major figure in the horror genre. Kubrick's film, starring Jack Nicholson and Shelly Duvall, came out three years later. Both became hits — and that's good for the pulling in audiences, says Minnesota Opera artistic director Dale Johnson. Several managers from other opera companies are attending the world premiere of The Shining this weekend, to the encouraging news that the entire run has been sold out for weeks. But, Johnson says, it presents a challenge too.

"It's just part of our popular culture," he says. "So we have to make sure that the pace of the opera, and the telling of the opera, doesn't sit too long in one place — because the audience is already ahead of you."

This challenge went first to Mark Campbell, who had to secure Stephen King's approval for the structure and content of his libertto. Campbell got it, but says he had to do a lot of distilling.

For those who missed out on the book and the movie, The Shining begins with Jack Torrance driving his wife, Wendy, and son, Danny, across the country to his new job: winter caretaker at the empty Overlook Hotel in the Colorado Rockies.

"There it is," Jack sings in the opera as the family approaches the hotel. "Oh, Jack! It's gorgeous!" Wendy replies. "It's perfect! So perfect!"

Those who do know The Shining know Jack Torrance is not a happy man: A drinker who has swung from failure to failure, he's desperate for a new start. Baritone Brian Mulligan, a bear of a man with an impressive beard, sings the part of Jack.

"He's a survivor of extreme domestic abuse," Mulligan says. "He's kind of struggling to end that cycle of abuse with his own family — and failing miserably," he laughs. There is a lot of nervous laughter around this production. It seems to be a way of dealing with the troubling aspects of the story. 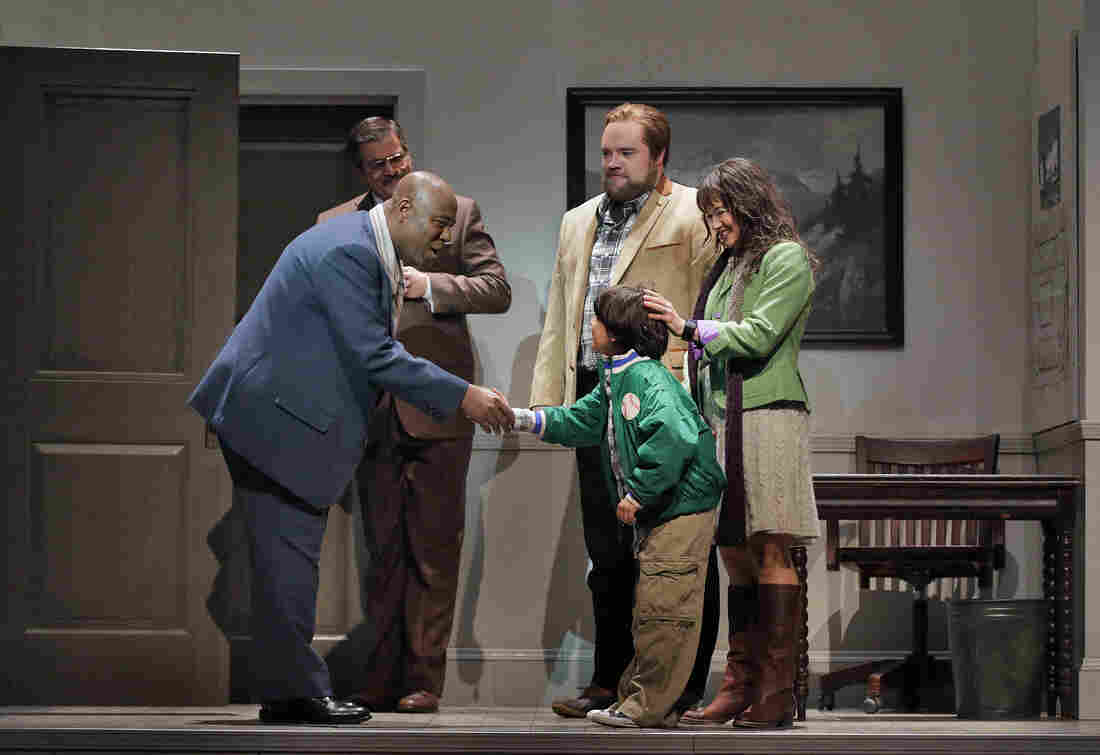 As the Torrance family settles in, it becomes clear there are evil spirits in the Overlook. Paul Moravec says the hotel itself becomes a malevolent character.

"I think of the Overlook as sort of this gateway into hell," he says. "And when you finally see the ghosts appearing at the end of Act One, it's as though the gates of hell open up and they come spilling out onto the stage."

Grotesquely costumed actors and carefully choreographed video projections create the haunting. The ghost of his abusive father tells the increasingly unstable Jack that his wife and son must die. Brian Mulligan and soprano Kelly Kaduce, who plays Wendy Torrance, have been training for weeks for what comes next.

"They have some awesome fights," Mulligan, says. "I mean, they are really good."

Kaduce and Mulligan both say that to sing and fight at the same time is exhausting. They had to ask Moravec to write a little extra music in some spots just so they can catch their breath.

The Shining is the latest in a series of Minnesota Opera premieres based on popular books, plays and movies, including The Grapes of Wrath, Silent Night — which won a Pulitzer for its score — and Doubt. But the goal of the company's New Works Initiative goes beyond filling seats. The aim, Mark Campbell says, is to create new operas that will be performed around the country.

"If we get more people into the opera house because of the familiarity," he says, "and expose them to new and exciting and challenging music, we all win by that."