Accessibility links
Transgender Choruses Harness The (Changing) Power Of Voices : Deceptive Cadence Transgender people are speaking out in society — and singing in choirs nationwide. "Voice is probably one of the deepest signifiers of who a person is," says the founder of a group about to debut. 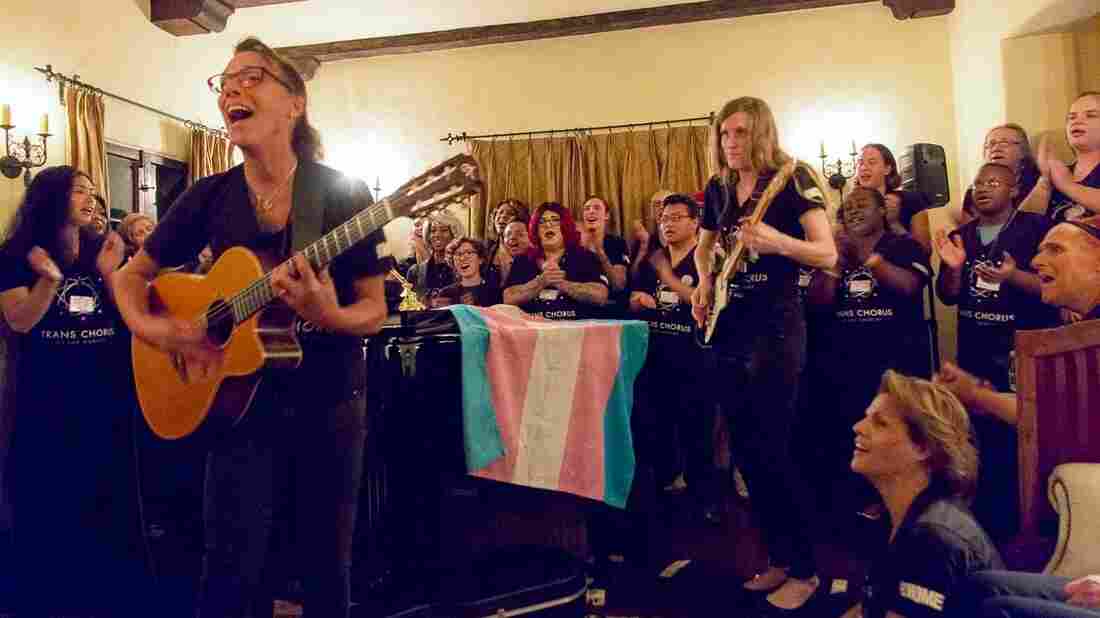 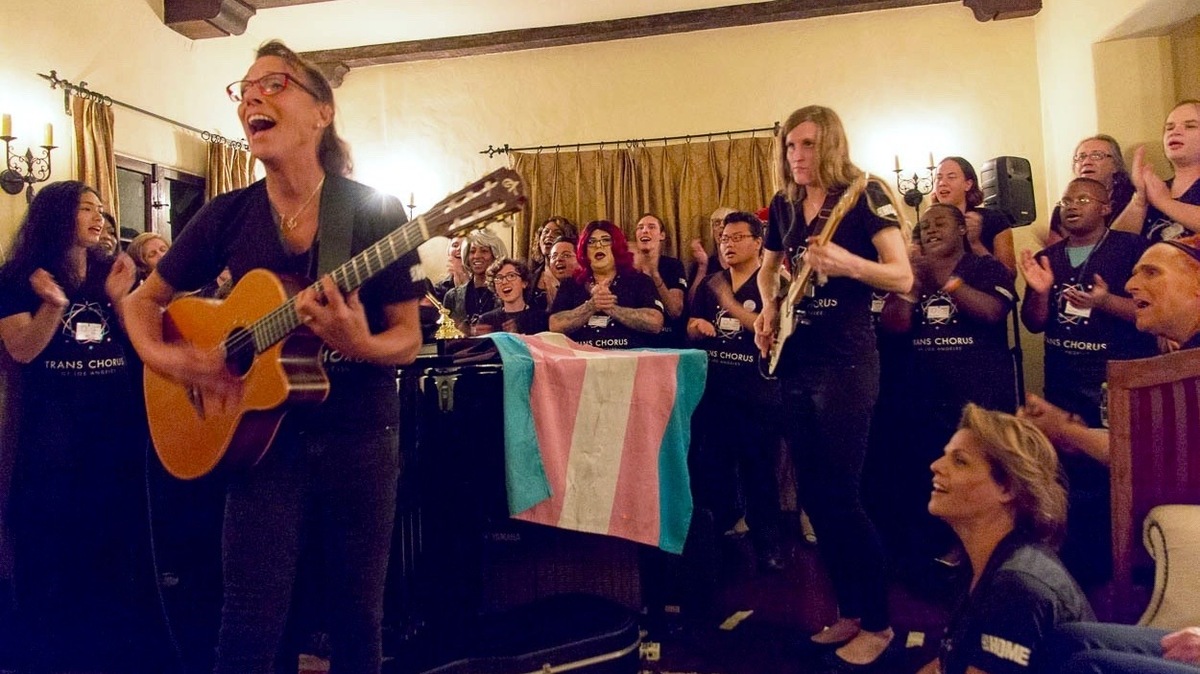 Transgender choruses — such as the Trans Chorus of Los Angeles, led by Lindsey Deaton (with guitar) — are springing up all over the country. A transgender pride flag is at the center of this image.

The ongoing controversy in North Carolina over access to bathrooms has increased the general public's awareness of issues facing transgender people. One thing you might not think about is voice: How does that essential tool of communication change with gender transition? It's something that has deep emotional and psychological resonance. It's also something that's playing out in a growing number of transgender choruses across the country.

As a young child growing up in South Africa, Gillian Power sang in school and church choirs.

"It was one of the things I remember from that time as something that was just so deeply joyful," Power recalls. Now she is in her early 40s. She came out as transgender a couple of years ago.

"A person's sense of identity and who they are is so inextricably linked to their voice," Power says. "Voice is probably one of the deepest signifiers of who a person is."

Female hormones didn't change Power's voice. So she's taking voice lessons. As she works with her teacher, Power seems to find the confidence to really breathe, to release feelings, to express her true self — things she says felt incompatible with her body for so long.

Power lives in Kansas City with her wife and two young children. Last year on a business trip to Boston, she sat in on a rehearsal of that city's Butterfly Music Transgender Chorus.

"I was so deeply moved," she recalls, "and I said, 'Kansas City needs a chorus too!'"

So Power started the Heartland Trans Chorus. The Boston ensemble that inspired it was founded by Sandi Hammond, a non-trans performer and voice teacher. Hammond thinks of the trans voice as an entirely new instrument, pointing out that during male puberty, vocal cords lengthen and thicken and the voice box grows. For trans men, it's not the same.

"It's going to be a different timbre, a different color, some of the bottom notes that a bass might get are not as likely to appear," Hammond explains. "And for trans women, why are some able to explore what we call falsetto in the male voice to develop a more female sound and some are not? And then collectively what is that timbre of a trans chorus?"

Boston's Butterfly Music Transgender Chorus had its first performance last month. Other choruses have started up in Chicago, Atlanta and New Hampshire. The biggest one is the Trans Chorus of Los Angeles.

When TCLA Artistic Director Lindsey Deaton put out the call for singers last summer, she didn't know what to expect. "I had no idea who was going to show up," she says, "much less what their voice type was, what they could sing, or if they could sing."

Turns out, they could sing. "I was so ecstatic," Deaton says. "People came into the room and their spirits were bright."

Just like in other cities, people brought years of musical experience. Many of them had given up on the idea they'd ever perform again, either because they lacked confidence in their new voices or they felt unwelcome in traditional church choirs or other community choruses. Deaton reached out to arrangers from gay choruses to help put songs in the right keys and registers.

"We were pretty close to being a TTBB chorus," she says. "That's tenor 1, tenor 2, baritone and bass, with some people singing a little higher. In thinking about it, of course that's where we're going to end up. Most of our adult trans women are going to be singing tenor and baritone and bass. And most of our trans men who've been on testosterone and had a voice change are going to be down in tenor and bass and baritone."

Deaton says anyone who opens their ears will find something in common with trans singers. "You know, the soul has a direct line through song," she says. "And that's what music is all about, is sharing that emotion. And once you do that, then everybody gets it. Unless you're dead from the neck up and you don't hear. But, I haven't seen anybody not get it so far."

The Trans Chorus of Los Angeles has concerts through the summer. In Kansas City, the Heartland Trans Chorus will give its first performance in June — just in time for the LGBT pride events.