Accessibility links
Looking For Women's Music At The Symphony? Good Luck! : Deceptive Cadence Recent surveys show that less than 2 percent of music performed by American orchestras is by women composers. This year's Pulitzer Prize winner, Du Yun, speaks out on diversity in the concert hall. 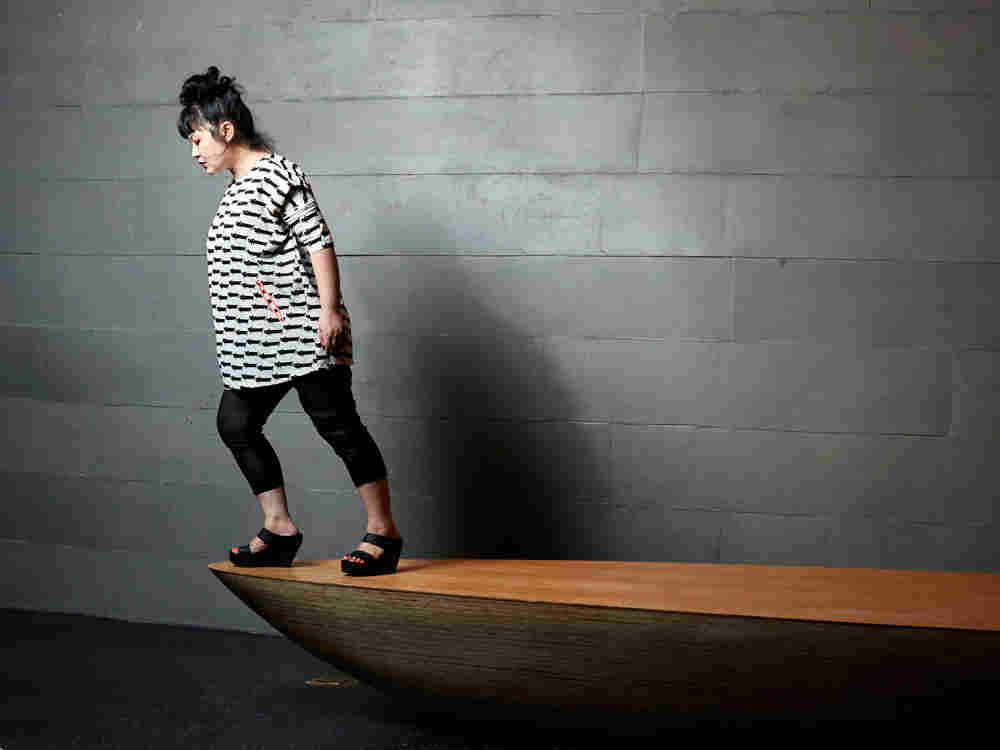 Although more women have been winning Pulitzer Prizes for music lately, it's still next to impossible to hear works by female composers performed by America's symphony orchestras.

This year's Pulitzer winner, Du Yun, has a lot to say about the situation.

The last time I spoke with her it was April 10, she had just won the prize and was stepping out of her noisy hotel bar in Abu Dhabi to take the call. She was attending the 2017 Culture Summit which presented sessions such as "Globalization and the Other: Lessons from Refugees and The Dislocated."

Don't Hire Me. Hire A Female Composer Instead

A native of Shanghai currently based in New York, Du Yun says she's "very plugged into social change" and she's keen to discuss the entangled intersections of music and social issues around the world. She won the Pulitzer for Angel's Bone, an eclectic opera that mixes renaissance, punk and contemporary classical styles while telling a harrowing tale of human trafficking.

The conversation below – which has been edited for length and clarity – centers on the lack of women's music in America's symphony halls and follows a provocative essay by composer Mohammed Fairouz published earlier this week.

Tom Huizenga: Let me present to you a few numbers. In a Baltimore Symphony Orchestra survey of 85 American orchestras and their programming for the 2016-17 season, female composers make up only 1.3 percent of the music performed. Looking at the upcoming 2017-18 concert season, there are organizations like the Cleveland Orchestra, which will feature 38 different composers but no women. The New York Philharmonic will perform works by 34 composers and only one woman. Why is it so hard to hear orchestral music composed by women in our concert halls?

Du Yun: I don't understand what's going on with their artistic choices because I was not a part of that. But this problem might be manifold. First, it's obvious we could say that people are turning their back on women composers, or they are not doing a vigorous search to identify who the women composers are. To me, as a female composer who is Chinese, I think it's a little deeper than that. In this particular time in our society, when we evaluate what is "good" and "not good," it is very monogamous and perhaps too monotone. The author, Tariq Ramadan, has a book on super diversity. He was saying that the "super diversity of our time requires an intimate way of dealing with our own beliefs, convictions, and the 'other.'" There's no diversity outside without a sense of diversity inside. So, I feel like we have to look within ourselves.

The fact remains that music by female composers is out there. It's just not being programmed – or programmed very much.

I will gently point out that sometimes when people think they have programmed women composers, they are looking at an Excel spreadsheet. And then they're looking at who are the living women composers – like Kaija Saariaho and Unsuk Chin, for instance. And then you say, "If I've programmed Saariaho for one season, then I've done my job." But you're not solving the root of the problem. It's a historical problem and we need some years to work hand-in-hand to fix it. I think the debate of equality and diversity should happen within ourselves; we need to understand what diversity means to us so that we don't just stop at an Excel sheet.

Mohammed Fairouz, in an opinion piece we published recently, declared that those who program orchestra concerts should practice what he calls "positive discrimination" by choosing an equally interesting piece by a woman composer over his music. How do you feel about that? Should more male composers follow his lead?

Well, Mohammed is a personal friend, and I want to say that I respect his opinions and I applaud him spending time identifying these issues.

As females, I don't think we want the problem solved that way. Some of my contemporaries don't want to talk about the female problem because they feel like whenever they get a teaching position or an award, we are just being pinpointed, fitting into the model. I don't think that's what Mohammed is saying. But you could have backlash from female composers because you think that they are really the oppressed ones. This is how you treat the so-called refugees – to give them food. If you have done work in a refugee camp – and I have talked to people who have – the refugee people never want to be called "refugees."

That's similar to conductors like Marin Alsop who don't want to be labeled a "woman conductor." She's tired of talking about all that. She's just a conductor.

Yes. I'm a little younger and I think her generation had it hard. They had to fight for so much. And my generation, what accomplishments we've had – with all our efforts – owe so much to that generation. Like Shulamit Ran [the 1991 music Pulitzer winner], she did not want to talk about why the Pulitzer went to a woman. But for my generation, we're in this time when I can wear a tutu skirt to the opening of my orchestral piece and I'm going to have a great time, and no one will dare to think I'm not a serious composer.

Speaking of Pulitzers. Three out of the last 5 music Pulitzers have been given to women. Does that mean anything?

It means immense, huge things. Well, look at my year, this year. The three finalists were women. Ashley [Fure], Kate [Soper] and I are good friends and we have this nice, supportive system going on because we really adore and respect our music. I feel there's this camaraderie spirit. And when we want to shift the paradigm, we have to get together and have a stronger voice. We have to support each other, and this is what is happening and I'm just so honored to be part of that shift.

What are some of the stumbling blocks female composers face? Is it just flat out discrimination or are there other factors?

Oh, so many, so many. From outside and from inside. But can I talk about China for a moment? I flew to Shanghai for a performance. There was so much media covering the Pulitzer news. They treated it very differently, as national pride. It was not because I'm a woman, not because of my musical language, it was because a Chinese person won. There were many reporters in their twenties. I remember one question, so vivid, from a young female reporter. She asked, "Du Yun, do you think that women have equal talent as their male counterparts to win an award like the Pulitzer?"

And then I was asking her, "Do you believe that?" I was born and raised there, and I know why they ask that question. But the fact that in the States we are even talking about this is already huge progress compared to nations which do not even have that conversation. I remember when I grew up, the thing was always, "Oh, Du Yun, you're so talented, but it's a pity you're a girl." Hearing that so much I didn't feel angry. Had I been here I would have been so angry. But I was used to hearing that and I thought, "Maybe I will prove them wrong!"

Do you have any stories about stumbling blocks in your own career, after your schooling, because of your gender?

To be very honest, I don't. I think that I'm one of those very lucky ones – maybe right time, right place. I'm the benefactor of people who are doing so much hard work championing women composers. For instance, I won the Elaine Lebenbom Award for female composers from the Detroit Symphony Orchestra. And I got a premiere with the Detroit Symphony. My music has been played and I personally don't think I've been discriminated against. But, it's not because I'm soooo good. Imagine all the others who are not as lucky as me. I think this is the issue — larger and deeper than the debate of discrimination at hand. Any sustainable and viable career paths cannot and should not depend on a few people's luck.

One of the big issues we haven't touched on yet that's directly related to the low percentage of women's music in our concert halls is the tendency orchestras have to program music by long-dead composers. It's not just women who are having trouble being heard in the concert hall, it's living composers, too.

Exactly. Orchestras deal with their subscription series, where they're looking at multiple concerts to sell to fill all those 1,000-seat concert halls. They're looking at name recognition so they don't lose the audience. That's a huge problem. But it's not about pointing fingers, like, "How dare you, Cleveland Orchestra!" It's a problem of society. We need to educate our audience. It's so important to have diversity. Let's not fear different voices. Let's not fear to hear [more than] Beethoven, Tchaikovsky and Brahms, even though they've written fantastic masterpieces.

Let me read to you what composer Andrew Norman told me after he won the Grawemeyer Award last November.

"The canon is so overwhelmingly white and male, but we can use new music to fix that problem. There are so many voices who should be heard in the concert hall today, of people whose music reflects a wide variety of experiences. That, to me, is the most important issue right now for contemporary classical music and classical music generally — how to get what happens in the concert hall to reflect the diverse society that we are."

Why are we in that parallel universe?

It goes very deep. In pop music, people take a stand. When you look at a Beyoncé or a Kendrick Lamar, they are going to tell you what they think. And audiences totally get it. They totally love it and they are totally hungry for it. But in our conservatory training, I think it's a little lacking. We are so interested in techniques and musical languages, the notation. And I love those things as well, but we're not asking what this music is about. When you go to an architectural school, they are actually asking, "What is this building's social function?"

What are some specific measures that could be taken to help boost female composers?

Conversations like this need to keep happening. Also, the so-called big awards need to go to a diverse round of people, not just women. We're also talking about race and orientation and all that.

We need to also examine what diversity really means. Diversity also means content, diversity also means styles. Diversity also means, "What do we want to say?" We can't just say one thing. For the long term, I would love to see some grants, for instance [to help with] child care. And some tax write-offs. Also, I'd love to see programs geared toward mentoring and nurturing young female composers. And I'd like to see initiatives for ongoing support for older composers. And finally, I would love to have people be more vocal about it – like me. I'd love everyone to be a feminist, because when everyone is a feminist, we won't have to be feminists anymore.