Accessibility links
In The Brooklyn Youth Chorus, Teens Speak Up By Singing Out : Deceptive Cadence The group is celebrating its 25th anniversary by commissioning new pieces of contemporary classical music — and pushing the composers who write for the ensemble to broaden their own points of view. 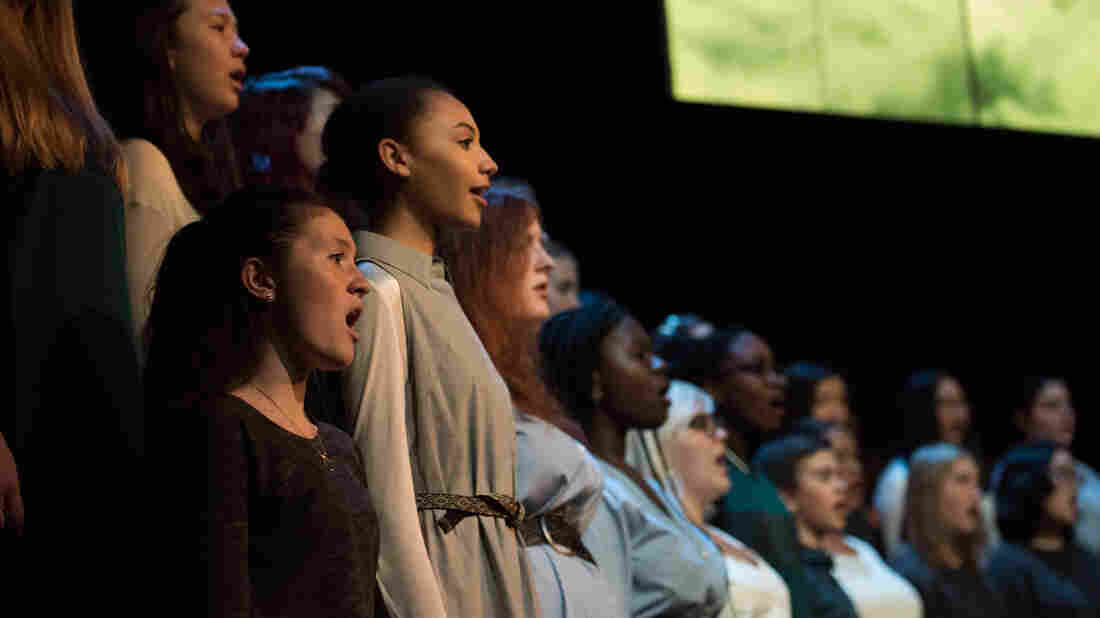 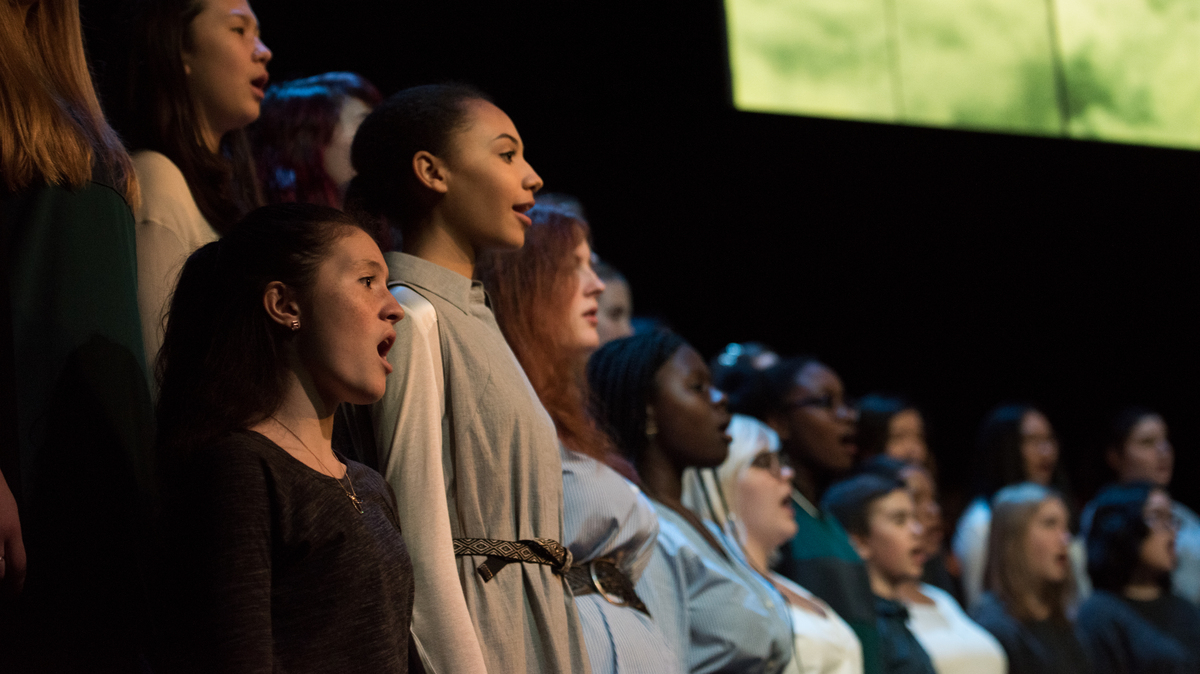 The Brooklyn Youth Chorus performs Silent Voices, a multi-composer work that addresses social concerns articulated by the young singers themselves.

Julienne Schaer/Courtesy of the artist

The Brooklyn Youth Chorus is not your typical kids' choir, singing folk-song arrangements and show tunes. It's made up of over 600 kids, from second grade to the end of high school, from struggling neighborhoods to New York's elite. Part of its mission is to give the kids a sense of purpose at a difficult time in life. The group has just released its first album, Black Mountain Songs, and is giving two high-profile concerts Friday and Saturday.

Dianne Berkun Menaker founded the Brooklyn Youth Chorus 25 years ago, and she wants the kids to connect to the music they sing. So, she's commissioned music from such rock musicians as Arcade Fire's Richard Reed Parry and The National's Bryce Dessner.

For its debut album, the chorus recorded songs inspired by a legendary incubator of 20th-century arts, Black Mountain College in North Carolina. But for the concerts this weekend, Burkun Menaker wanted to give voice to her teenagers and their concerns.

"This is a time in life for girls where they're very vulnerable, and it's very easy to kind of go off track," she says. "One of the things that I have seen over the years with the choristers that I teach is often, students who have remarkable talent have very poor self-esteem. So I work with the choristers individually to really help them own what it means to take up space in a room and put their voice out there."

She asked her young singers what kinds of things they wanted to tackle musically in Silent Voices, the program they're presenting this weekend at the Brooklyn Academy of Music — the topics that mattered to them as a racially, economically and culturally diverse group that comes from all over the city.

Izzi Stevenson, 17. has been with the chorus since grade school. She says that this program presented an opportunity.

"We're under 18, so even in the political landscape, our representatives don't represent us because we're not voting for them," Stevenson says. "Our interests are not heard and our concerns are not heard."

Berkun Menaker says the young singers were very clear about the concerns they wanted composers to address.

"The things that came up that everybody felt mattered were addressing issues around race, gender, sexuality, ageism," she says.

One of the artists the group turned to was composer Shara Nova, who also performs as My Brightest Diamond. She wrote a piece for the chorus called Blind To The Illness. Nova says her piece was very much a reflection of the times.

"I wrote Blind To The Illness in the summer of 2016, [when] Philando Castile and Alton Sterling had been killed," Nova says. "I was really looking at myself and wanting to address my own privileges. And so the text for this song begins with a list of privileges, the first one being power to ignore the subject of racism. And in this original version of the text, the narrative was of an adult — me — admitting that I have racist beliefs, having grown up in this social institution."

At first, Nova's text read "I see no color." But Stevenson says she and the other choristers pushed back and asked Nova to reconsider those lyrics.

"What does that mean, that you see no color – like, of course you see color," Stevenson says. "How do we make sure that she understands the different viewpoints of our chorus?"

The composer took their concerns to heart and wound up rewriting the lyrics. The chorus now sings the words "I see in color."

Interacting with working composers has also inspired some of these young singers to start writing their own music. One of them is 17-year-old Sarah Maria Sotomayor.

"I can go on and on about growing up as as a mixed Latina woman," Sotomayor says. "The composers I heard of were Mozart and Bach and Beethoven — those are the ones who made it and who are always talked about in music classes, and that's all I was exposed to."

"It wasn't until I spoke with some of the composers we worked with at BYC," she continues, "and they were like, 'You should just try your hand at it,' like, 'We have a feeling you can do this.' And I said, 'Composing?' and I was like, 'Wow. That's all it takes. You just sit down and start writing music — anyone could do it!' But it was a lot for someone like me — who didn't have anyone in their life who did music — to be told by someone who is successful in music, 'You can do this, too.' "

And for these singers in the Brooklyn Youth Chorus, finding value in their own voices is something priceless.