Accessibility links
Lou Harrison, The 'Maverick' Composer With Asia In His Ears : Deceptive Cadence Routinely labeled an "American maverick," Harrison lovingly brought Eastern traditions and the rugged American West together in his music, blazing new paths and constructing his own instruments. 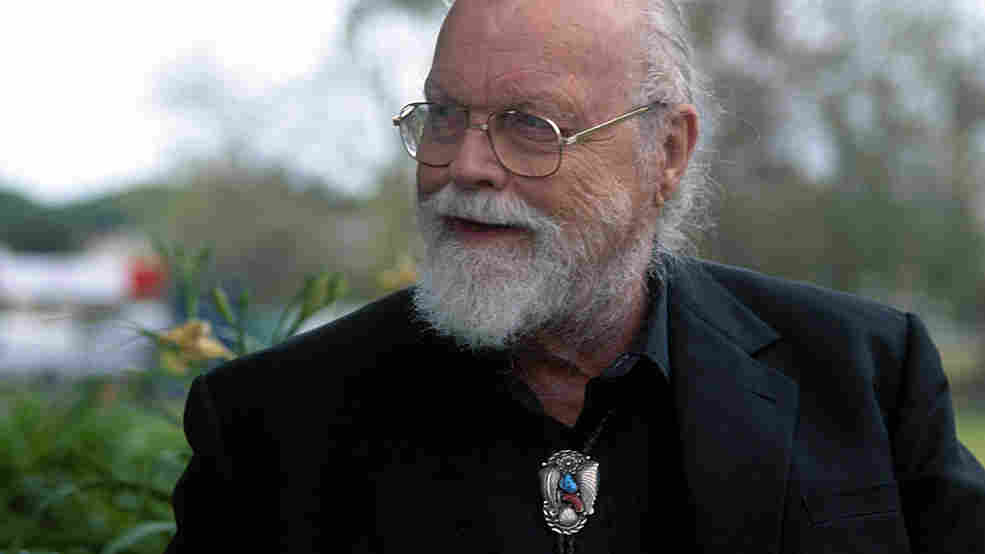 Composer Lou Harrison was open to the vividness of other cultures throughout his life. He helped introduce Indonesian gamelan music to the West. Courtesy of Eva Soltes hide caption

When it comes to exploring music from other cultures, our ears are open wider now than ever before, thanks in part to YouTube and streaming services. But there's someone else to thank: composer Lou Harrison, who was born 100 years ago on May 14, 1917. Often called an "American maverick," Harrison blended Eastern and Western traditions in his music, practicing a kind of "cross-culturalism" long before it was fashionable.

Harrison was born in Portland, Ore., and the Asian decor his mother chose for their home was his first window into the East. Later, when the family moved to San Francisco, Harrison the teenager spent his nights at the opera. Not Puccini or Verdi — the Chinese opera. Eventually, you could hear Asia bubbling up in his music.

Enjoy hybrid music, because that's all there is.

"I think we should care about Lou Harrison and his music because are all living in Lou Harrison's world now," Campbell says. "Because you turn on the radio or your stream on Spotify or Apple Music and you're going to be hearing influences and music from all over the world."

The part of the world that Harrison especially loved was Java, home to the large percussion orchestras called gamelans. Harrison almost single-handedly brought gamelan music to America: He built his own American version of a gamelan and, later, mixed western instruments with the Indonesian originals in pieces like Concerto in Slendro and Threnody for Carlos Chavez.

Although he never earned a college degree, Harrison was thoroughly grounded in the Western classics. He came to regard Bach and Beethoven as just more "world" music, as he explained to NPR in 1999.

We all may be alike, but Harrison was one in a million to conductor Michael Tilson Thomas, who championed Harrison's music.

"He so courageously always was himself," Tilson Thomas explains. "When I think of Lou Harrison, I immediately think about him smiling. That was the expression nearly always on his face. He had such delight in the diversity of things."

The composer's motto was "Cherish, Conserve, Consider, Create." He was a published poet, a painter and a calligrapher, and was openly gay back in the 1930s. In 1995, Tilson Thomas opened his first concert as music director of the San Francisco Symphony with a piece by Harrison. It's called A Parade for MTT and inside it, the conductor says, is a little bit of everything.

"It's a very up-tempo, encouraging piece, with a melody that sounds vaguely Irish to me," Tilson Thomas says. "But it's accompanied by all manner of tone clusters and unusual percussion noises, and it's somewhere between a kind of Irish-Souza march as played by a gamelan ensemble, perhaps."

Harrison, however, didn't always write such joyful music. As atonality emerged as the progressive force in music in the 1940s, Harrison fell under its spell and studied with Arnold Schoenberg.

"All young composers [at the time] were beguiled by Schoenberg," Campbell says. "So some of Lou's music, like the Prelude for GrandPiano (to Henry Cowell) and others like that, [was] very much in that Schoenberg tradition of what we now call 12-tone music. And Lou pursued that pretty assiduously through the mid-1940s."

Harrison moved to New York in 1943. The big city bewildered him, but he found success when, in 1946, at Carnegie Hall, he conducted the world premiere of the Third Symphony by Charles Ives, a work that had languished for 40 years.

Although his performance earned a Pulitzer Prize for Ives, New York triggered a nervous breakdown for Harrison. He high-tailed it back to California, where he could focus on his fusion of East and West.

Harrison was fond of saying, "Enjoy hybrid music, because that's all there is."

"He knew that all music actually comes from other musics and combinations," Campbell says. "There's no such thing as a pure music."

But if there was one pure through-line in Harrison's music, Tilson Thomas says it's melody. 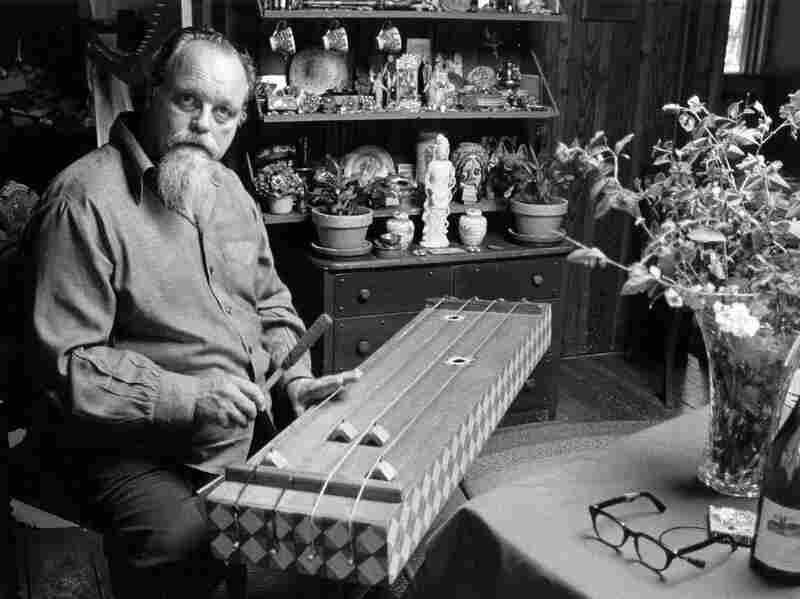 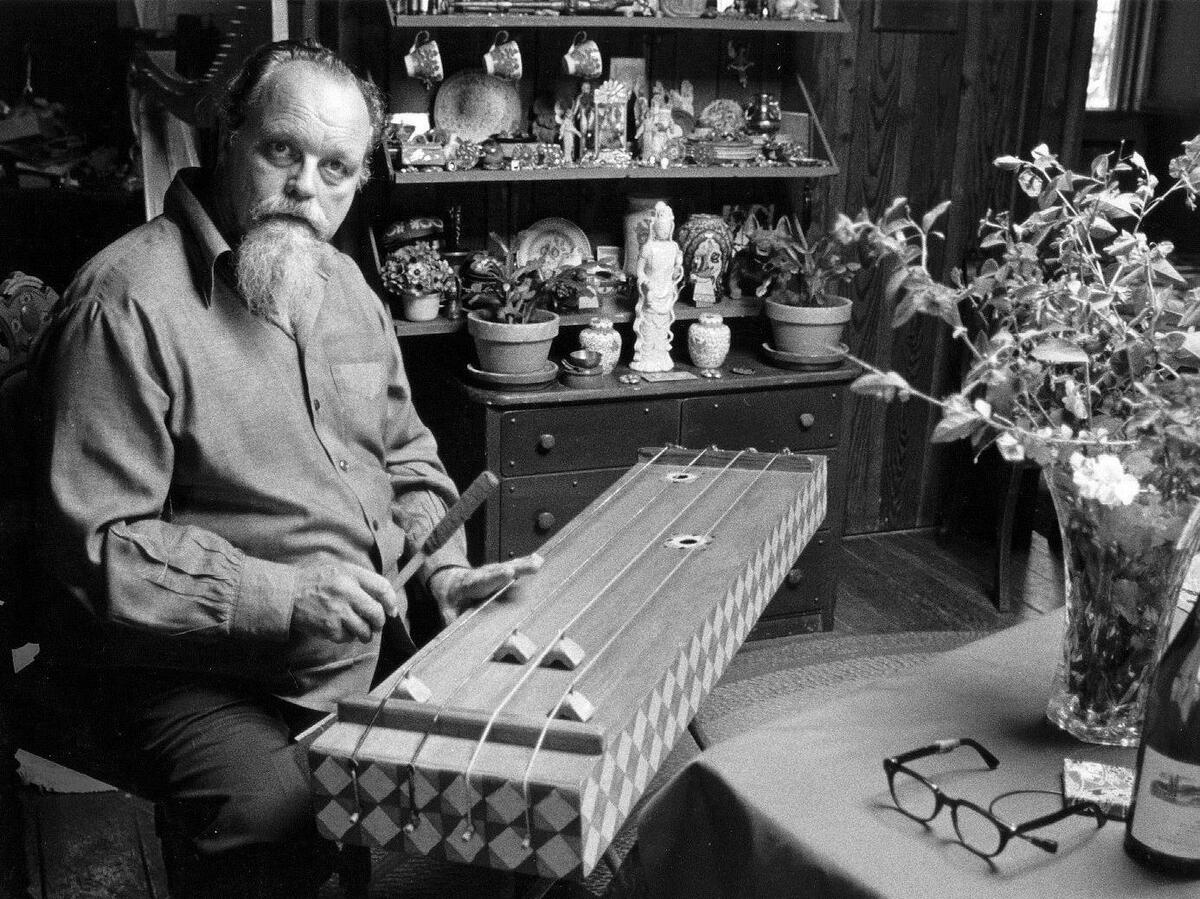 Lou Harrison playing one of his homemade instruments.

"Nearly all of his pieces have tunes that you remember and that really can become part of your life," Tilson Thomas says. One of his favorites is from the Suite for American Gamelan and Violin.

"When I'm on a hike and there's still one big ridge that I have to get at the end of a long day of walking," he says, "I just think of this tune and hum it and as it comes into my thoughts, somehow I find the energy to make it up that last hill."

Centennial celebrations for Harrison have spread out across the country over the past few months. His music will be performed at Southern Oregon University and in Santa Cruz, Calif., near where the composer used to live. And, at his final home, the magnificent straw-bale Harrison House in Joshua Tree, Calif., events are running around the clock on May 14.

Lou Harrison may be gone, but the spirit of his wide open ears remains strong.

Thanks to the Lou Harrison Archive at UC Santa Cruz for the historic recording of the Ives Third Symphony heard in the radio version of this story.