Songs We Love: The Crossing, 'The White Wind' 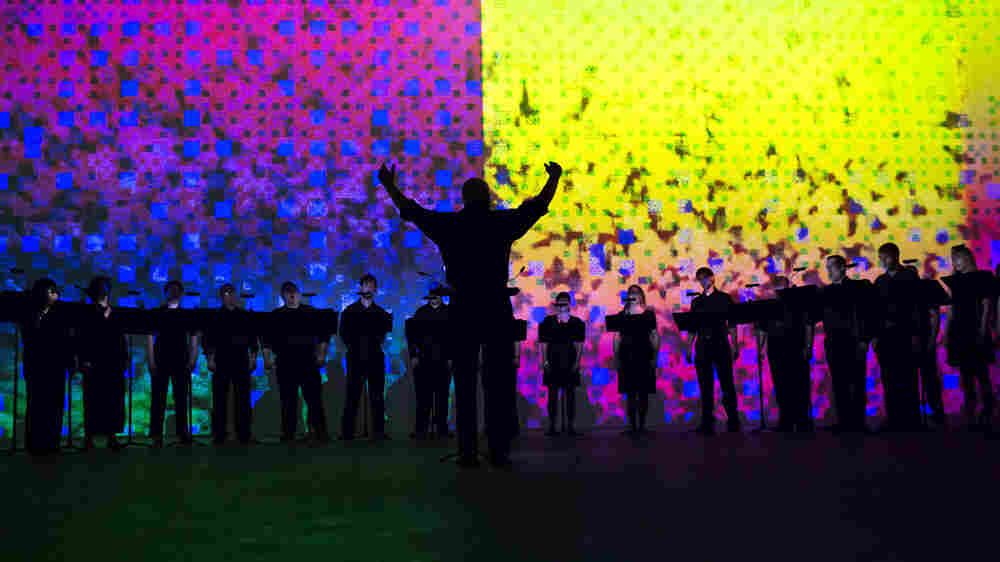 When John Luther Adams won the Pulitzer Prize for music in 2014 for his undulating orchestral piece Become Ocean, you'd be forgiven for thinking of him as something like the Jacques Cousteau of contemporary classical music. His musical explorations, which are inspired by and often incorporate natural surroundings, make him our most environmentally articulate composer. Like Cousteau, Adams spent time as a conservationist; he worked for the Wilderness Society and the Alaska Coalition.

For his new album, Canticles of the Holy Wind, Adams has lifted from water into air. And as with Become Ocean, it's easy to get swept up into a distinct environment — in this case, a world of suns, winds, skies and birds, sung a cappella by The Crossing, a Philadelphia-based chamber choir devoted to new music.

Beginning with a soft drone and the rumble of bass voices, "The White Wind" begins to billow in a repeating scale, adding voices and volume as it surges like a sudden whirlwind. Gusts of air, from the lungs of the choir, rise to a full cry in all registers and eventually recede back to the basses. The music, while singularly Adams' own, recalls earlier progressive vocal works, from David Hyke's Hearing Solar Winds and Philip Glass' Koyaanisqatsi to Brian Eno's Music for Airports.

There are other "Winds" on the album — colored yellow, blue and black — and an aviary of doves, mockingbirds, owls, canyon wrens and hermit thrushes, all sung without words, but thick with complex (and sometimes jarring) harmonies.

There's a message with the music, too — directly from the composer. In the album booklet Adams writes that, due to everything from global warming to rising fascism, "it's difficult to maintain unmitigated faith in humanity." What's "Holy" for Adams, however, is all around us.

He adds: "I don't look for answers in political ideology, humanistic philosophy or religious dogma." Instead, he says, he places his faith "in the land and the skies, the wind and the birds — in what we call 'nature.' "