Accessibility links
40 Years Ago, In A Galaxy Far, Far Away, An Iconic Film Score Was Born : Deceptive Cadence Star Wars was released 40 years ago today — and it wasn't just the light sabers that changed pop culture. John Williams' epic music, played by the London Symphony Orchestra, became a touchstone.

40 Years Ago, In A Galaxy Far, Far Away, An Iconic Film Score Was Born

40 Years Ago, In A Galaxy Far, Far Away, An Iconic Film Score Was Born 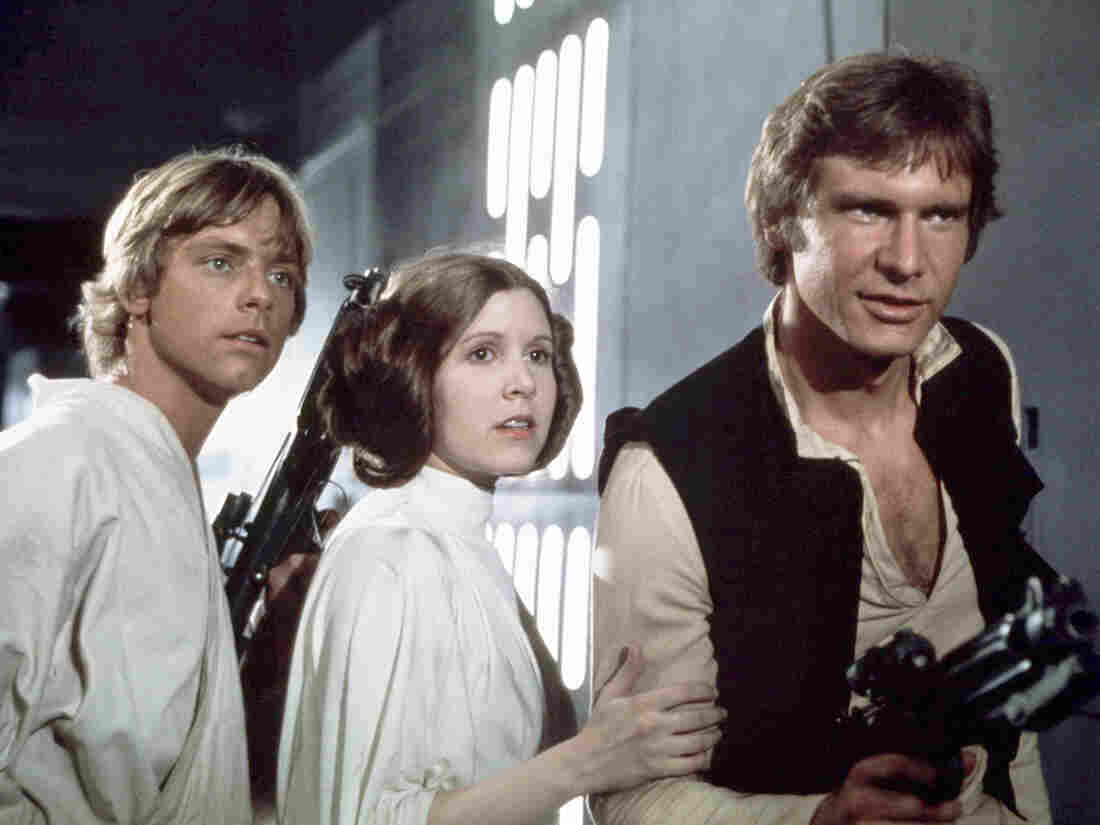 Actors Mark Hamill, Carrie Fisher and Harrison Ford on the set of the original Star Wars film. The movie was originally released on May 25, 1977. Sunset Boulevard/Corbis via Getty Images hide caption 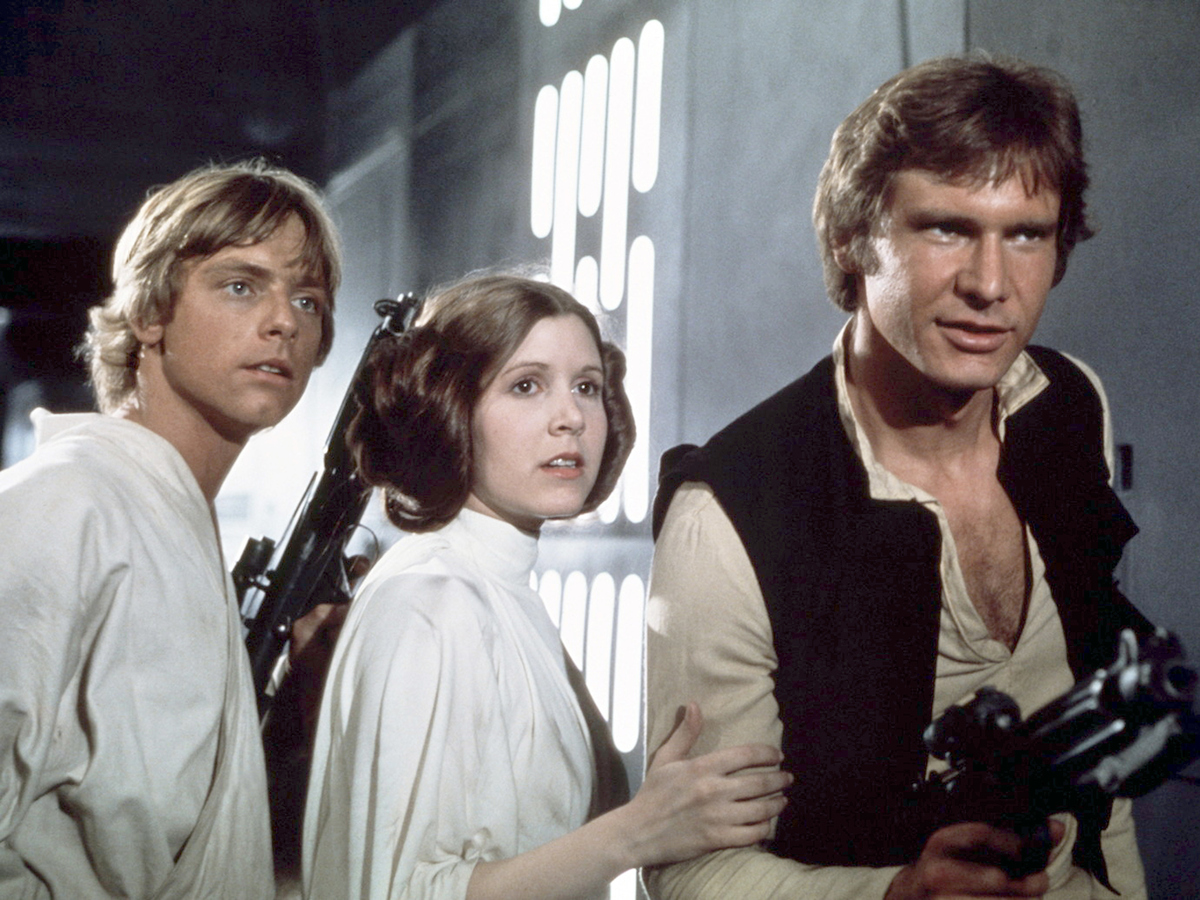 Actors Mark Hamill, Carrie Fisher and Harrison Ford on the set of the original Star Wars film. The movie was originally released on May 25, 1977.

How is this for a first day on the job: Maurice Murphy, the London Symphony Orchestra (LSO)'s late principal trumpet player, spent his very first day with the orchestra recording Star Wars' iconic opening theme, with its incredible brass fanfare — and Murphy leading the trumpets.

"It was an amazing moment, that blast of brass that opens the film. It was the first sound I heard from Maurice, really," the film's composer, John Williams, told the London Symphony Orchestra in a 2007 podcast celebrating Murphy, who was then retiring from the orchestra. "It was electrifying ... Everyone felt it. And I think people around the world, whenever they hear that piece now, there's a kind of instant reaction that I think really was elicited in its initial spirit by Maurice's sound, and just that heraldic spirit that lies within everything he plays ... I think of his playing, or the effect of his playing, as having created the voice of a hero."

Star Wars opened 40 years ago today — and pop culture was changed forever with its release and the ensuing constellation of shorthand cultural references. Its epically scaled, lushly orchestrated score, written by John Williams and played by the LSO, became a global touchstone in music.

The LSO is celebrating the 40th anniversary of its most-famous recording with a page of goodies, including the attendance sheet for that first recording session. (If you're a film-score buff, by the way, you might want to check out that whole podcast about Maurice Murphy — Williams also talks about working with Murphy on other films throughout the Star Wars series as well as on the Harry Potter films.)

Williams' heroic music, embedded with references to the music of composers like Gustav Holst, Richard Wagner and Richard Strauss, has been heralded as a musical landmark. When the Library of Congress added the Star Wars soundtrack to the National Recording Registry in 2004, Emilio Audissino wrote on behalf of the Library:

"Apart from the huge popularity and the many awards, Williams's 'Star Wars' is a milestone because it was instrumental in reviving the musical style of the Golden Age of Hollywood (1930s to 1950s), and was seminal in boosting a new interest for symphonic film music ... The score is rich in leitmotivs — à la Wagner through the Hollywood tradition — and is lushly orchestrated and highly coloristic, and follows tightly and extensively the visual actions and narrative lines."

The matter of how a British orchestra came to be associated with one of the U.S.' most canonical pop-culture tentpoles might be simply a matter of economics. In those years — and in a situation that continues to this day — most American orchestras' studio recording activities were tightly constrained by very strict union regulations and the associated costs of getting a major American orchestra into the recording studio under those union stipulations were, usually, deemed prohibitive. As a matter of comparison, the hourly rate for American players was roughly three times that of equally talented European musicians. According to a 1977 Twentieth Century-Fox budget breakdown unearthed a few years ago, the studio had allotted $100,000 for the score and recording costs, out of an $11 million total budget.

The LSO tells the story of their involvement from a different angle, recounted in the orchestra's official history, the 2003 book A Century of Triumph and Turbulence, written by Richard Morrison. According to Anthony Camden, the orchestra's former oboist and chairman, he had a business meeting with then-principal conductor André Previn, who was a widely heralded Hollywood composer, particularly for his work in the 1950s and 60s. During their meeting, Camden suggested that Previn write a new film score that the orchestra could then record. Previn declined, but proposed that Camden get in touch with another American film composer by the name of John Williams.

Previn promptly called Williams, and passed the phone over to Camden. Williams said that he was, in fact, just starting to work on a new score, but that "it wouldn't interest the LSO because it was all 'up in the universe.'"

The LSO already had a long history of working within film music, going all the way back to 1935. Coincidentally, its very first recorded score was for another science-fiction fantasy, Arthur Bliss' music for Things to Come. It was H.G. Wells' screen adaptation of his novel about the rebirth of civilization after a long world war — and whose population attempts space travel.

Even though the 1977 Star Wars soundtrack became one of the most famous pieces of recorded music in the 20th century, it didn't become a major money-maker for the British orchestra.

There's a delicious-sounding, but apparently spurious, anecdote floating online about supposed negotiations between the LSO musicians and the film's director, George Lucas, in which Lucas allegedly offered the orchestra the choice of either receiving their regular fees for the work upfront, or waiting to receive a "small" share of any box-office profits.

The LSO's archivist, Libby Rice, took a peek at the ensemble's records for NPR, and confirmed that Twentieth Century-Fox paid the orchestra the standard British Musicians' Union rates, as well as standard residuals from the album release and a standard administration fee to the LSO organization for arranging the sessions. According to the LSO, there is no record of any negotiations, or any discussions about the fee structure for Star Wars, in the orchestra's minute books.

That first Star Wars film went on to earn more than $786 million worldwide.