Accessibility links
300 Years Of Handel's 'Water Music,' With A Splash Of Politics : Deceptive Cadence Three hundred years ago, England's embattled King George I decided to divert public attention from the country's woes with a big musical party on the River Thames. 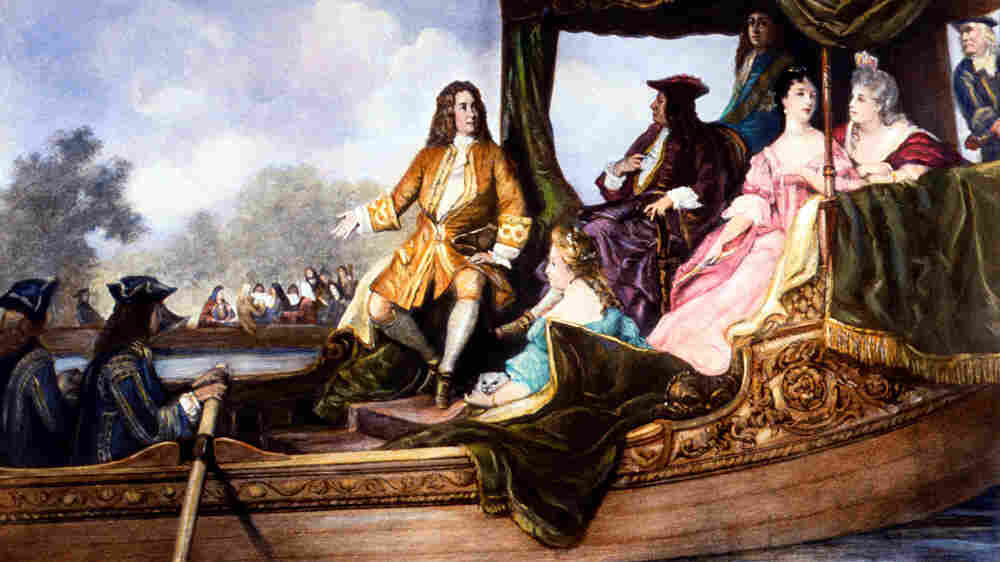 So what do you do if you're a recently crowned head of state and you're already facing opposition — even from within your own family? One answer is optics. Make a big, public splash; throw a lavish party with A-list musical entertainment. That's just what happened in London — 300 years ago Monday.

In July 1717, King George I of England was feeling heat from an opposing political faction gathering around his son, the Prince of Wales. The king must have thought: "How can I turn the spotlight back on me?" What about a boating party along the Thames? With an orchestra!

The king's boating blowout gave birth to a smash hit — Water Music, composed by George Frideric Handel for his majesty's royal ride up the Thames.

Handel is definitely the non-Brexit composer.

"This was a new thing," says conductor Nicholas McGegan, "to have quite such elegant and organized music in a barge towing behind the royal one, where the king sat with his two mistresses and watched the world go by."

McGegan is marking the 300th anniversary of Water Music by conducting the piece at a dry dock in Hull, England, later this week. The political intrigue behind the music is no surprise.

"The tradition in the Georgian household was to hate your children," McGegan notes. "And that happened over generation over generation. So it was a big publicity deal for [King George] and another way of making his son look bad."

The king got the publicity he wanted. Two days later, a London newspaper crowed:

"On Wednesday evening, at about 8, the King took Water at Whitehall in an open barge ... wherein were 50 instruments of all sorts, who play'd ... the finest Symphonies compos'd express for the Occasion by Mr. Hendel, which his Majesty liked so well, that he caus'd it to be plaid over three times in going and returning."

A few of those "50 instruments" were brand new to the Brits — like French horns.

"The audience would, I think, say, 'What was that funny instrument we heard? Hunting horns, but not ones that play tunes,' " McGegan says. "The horn players had to come from Bohemia, which was sort of the central place for all horn players. I guess the beer is really good."

Handel's hourlong Water Music comes in three suites of tunes — an ingenious blend of popular styles of the day.

"Handel is definitely the non-Brexit composer," McGegan says. "He takes stuff from France, Germany, Italy and mixes it all up. It's very much pan-European music, if you like."

Living in London, Handel was smart enough to know he also had to throw something very English into the mix. He came up with the "Alla Hornpipe," a variation on a dance that became Water Music's signature tune.

"The hornpipe is an English dance particularly associated with sailors," McGegan says, "and involves a lot of jumping up and down, and being a bit of a peacock as a dancer, to show off to the molls on the shore."

Londoners lined the banks of the Thames and squeezed boats into the river to hear the music and catch a glimpse of the royals. It was a spectacle the likes of which they'd never seen. It was also a public relations coup for King George. But would such an obvious diversion work for politicians today?

"I think it happens all the time, doesn't it?" McGegan says, with a chuckle. "Of course they wouldn't ask a fabulous composer like John Adams to write them some wonderful music. They'd probably get in some rather trashy rock band."