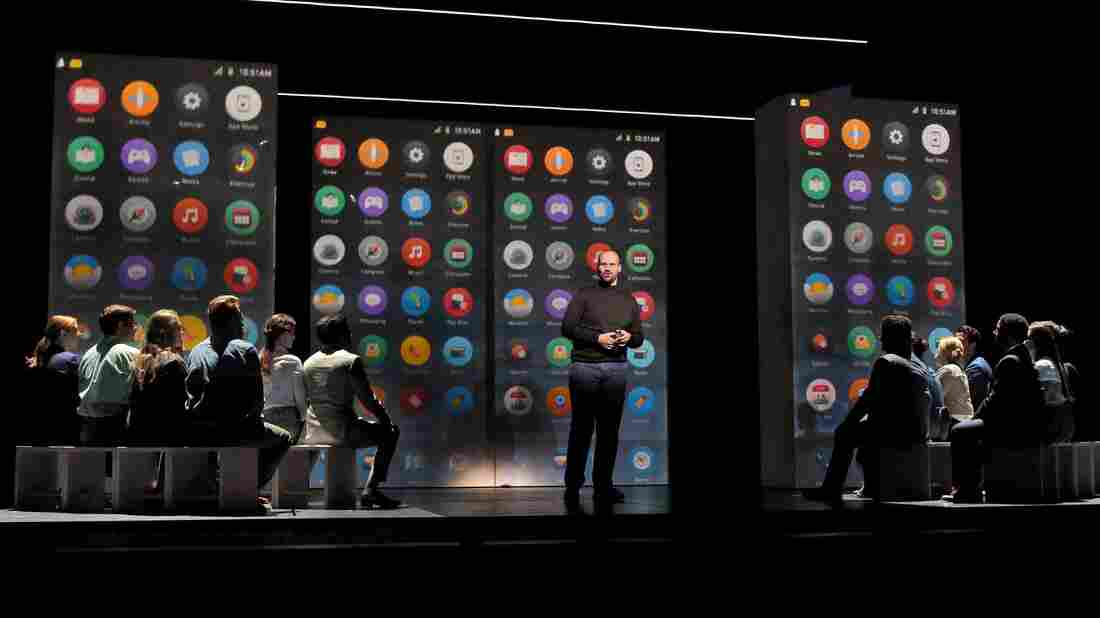 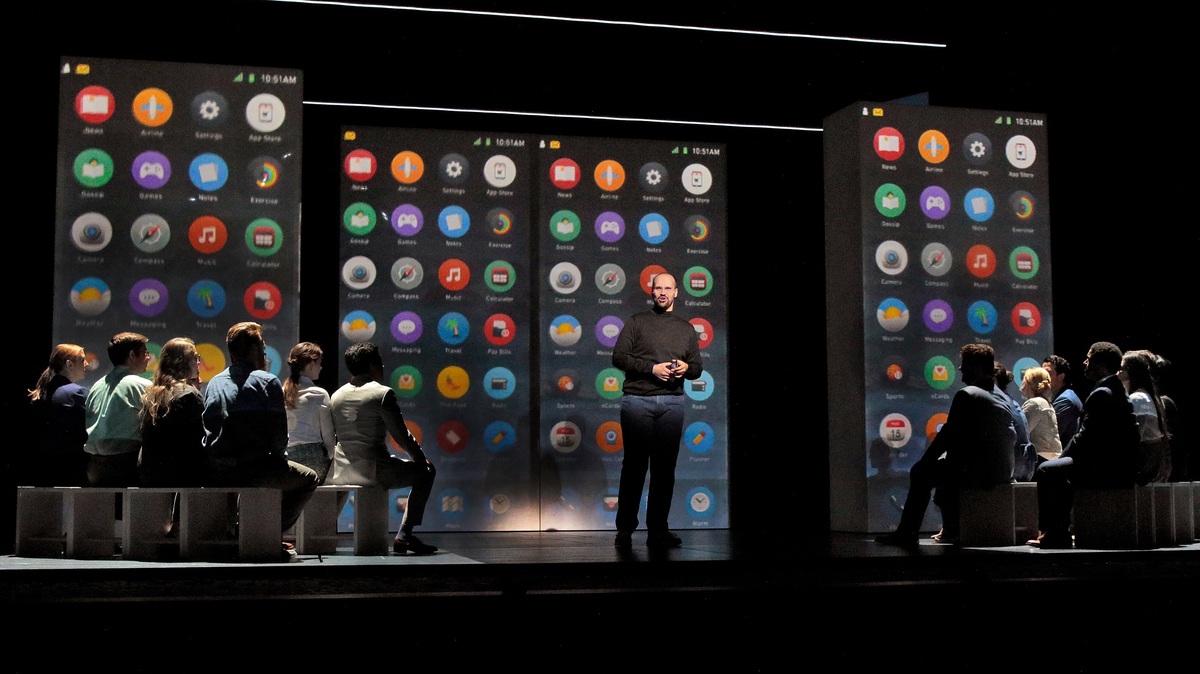 Edward Parks, who plays Steve Jobs, and the Santa Fe Opera Chorus in The (R)evolution of Steve Jobs.

Mark Campbell is one of the most prolific and celebrated librettists in contemporary American opera. But, as he recently told an audience at the Guggenheim Museum, not everyone thought his latest project was a good idea.

"I've had a number of socialist friends of mine saying, 'Why would you write an opera about Steve Jobs? He was the worst capitalist!' " he said.

Campbell's response to those naysayers? " 'Reach in your pocket — you probably have an iPhone there.' "

Jobs has been the subject of movies and books, and now the Apple co-founder's life has also become the stuff of opera. A decade after Apple released its first smartphone, The (R)evolution Of Steve Jobs premieres Saturday on the stage of the Santa Fe Opera.

Even Campbell was initially skeptical of the idea, which came from 40-year-old composer Mason Bates. Bates was convinced that in Jobs' "complicated and messy" life, he'd found the right subject for his very first opera.

"He had a daughter he didn't acknowledge for many years; he had cancer — you can't control that," Bates says. "He was, while a very charismatic figure, quite a hard-driving boss. And his collisions with the fact that he wanted to make everything sleek and controllable — yet life is not controllable — is a fascinating topic for an opera."

The (R)evolution Of Steve Jobs shifts back and forth in time over the course of 18 scenes. Its fragmented, non-linear narrative was a deliberate choice by Campbell and Bates, who wanted to reflect Jobs' personality and psyche. "Steve Jobs did have a mind that just jumped from idea to idea to idea — it was very quick," Campbell says.

Bates also created a different "sound world" to match each character. Jobs, for instance, played guitar and spent much of his life dealing with electronics, and so he "has this kind of busy, frenetic, quicksilver world of acoustic guitar and electronica," Bates explains. On the other hand, he says, Jobs' wife, Laurene Powell, inhabits a "completely different space, of these kind of oceanic, soulful strings."

Other characters include Steve Wozniak, Jobs' business partner, and the Japanese-born Zen priest Kobun Chino Otogawa, who led Jobs to convert to Buddhism and served as a mentor for much of his life. Otogawa's "almost purely electronic" sound world makes use of prayer bowls and processed Thai gongs.

As often happens when his compositions premiere, Bates will be seated among the orchestra musicians, triggering sounds and playing rhythms from two laptops. And before you ask: Yes, they are Mac computers. (Bates is quick to note he's not sponsored.)

Even the set echoes Jobs' creations. After a prologue in the iconic garage where Jobs' ideas first took shape, the garage walls explode into six moving cubes with screens that look a lot like iPhones. "We're doing something called projection mapping, where all of the scenic units have little sensors, so the video actually moves with them," opera director Kevin Newbury explains. "We wanted to integrate it seamlessly into the design because that's what Steve Jobs and Apple did with the products themselves."

Jobs's design sensibilities were enormously influenced by Japanese calligraphy — including the ensō, a circle that depicts the mind being free to let the body create. Bates says that also figures in the opera's title: The (R)evolution Of Steve Jobs, with the capital "R" in parentheses.

"Of course, there's the revolution of Steve Jobs in his creations and his devices. There's also the evolution from a countercultural hippie to a mogul of the world's most valuable company," Bates points out. "And there's the revolution in a circle of Steve Jobs as he looks at the ensō, this piece of Japanese calligraphy, and finds that when he can kind of come full circle, he reaches the kind of completion that he sought so long in his life."

That's the side of Jobs this new opera explores: the way his life was marked by the struggle to find the balance between life's imperfections and his drive to create the perfect thing.